Colour Mixing in the Snow

When October suddenly dumps fifteen centimetres of snow on your lawn, you might as well enjoy it the best as you can! We started by wallowing in snow and finished by painting it. 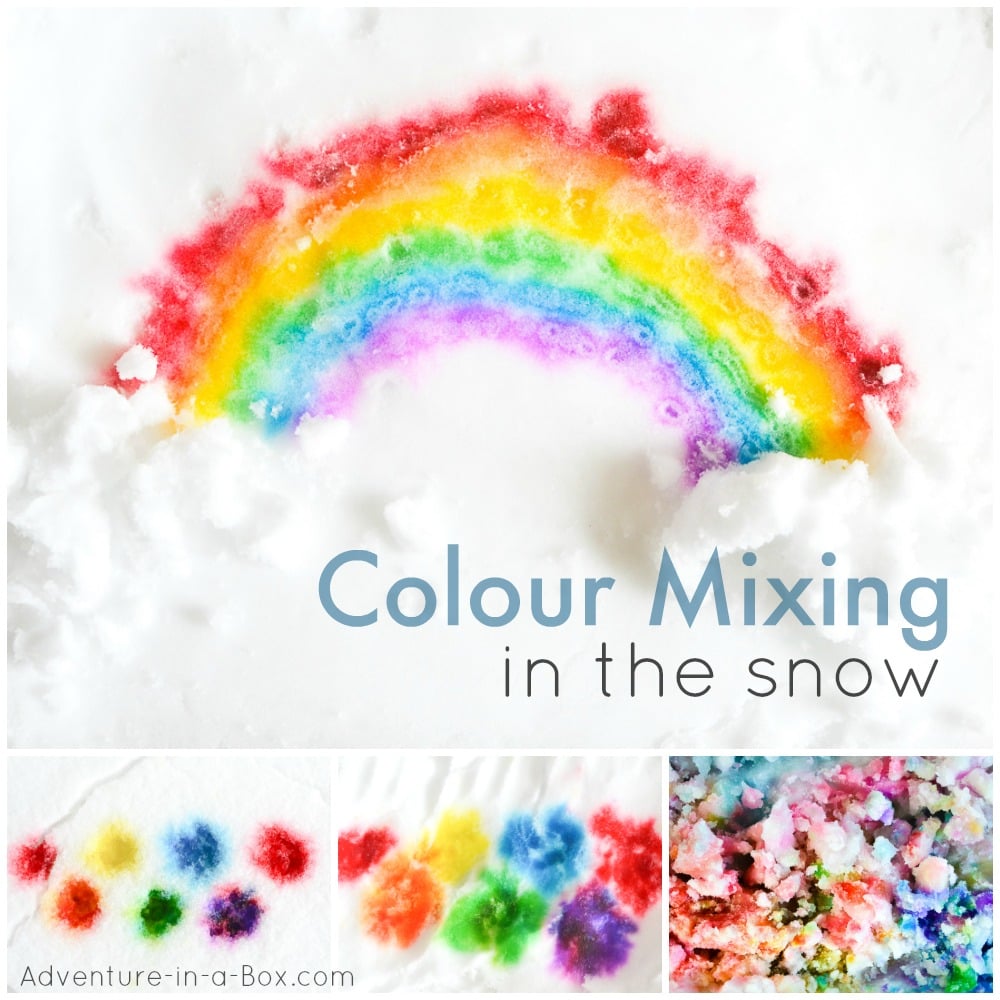 In the mind of a four-year-old, the morning of the first snow seems to be akin to the morning of Christmas. Yesterday, it was a mix of rain and snow which melted as soon as it touched the ground. At one point, I found my son whimpering on the couch. Why? He was very sad that the snow wasn’t staying.

Overnight, it froze, and we woke up to a white world outside. Gone were the neat rows of tomatoes in the garden, and our bean tee-pee turned into a bean igloo. My son looked out of the window, and – oh, wonder of wonders! – he saw all of that snow he had been pining for these last weeks. Not having been four-years-old for a while, I can’t exactly explain why he was longing for snow, but he was, and once it was here, he was very excited.

Right away, we got dressed. Well, first we rummaged through boxes to find our winter clothes. Then we headed outside and had a fun half-hour.

At which point Faye said “enough” as clearly as a 5-month-old can. Faye, my spring baby, is a big lover of the outdoors, which she knows is filled with bumblebees buzzing, flowers blooming, and a warm breeze gently fluttering the leaves above her head as she lolls in the grass. With the grass hidden and the wind sharpened by innumerable snow-blades, she recognized nothing she loves. Bundled in a snow suit, she couldn’t even suck on her fist for comfort. It was obvious that the transition would have to be made gently, so we went in.

It seemed unfair to separate Budster from his beloved snow so soon, so I resorted to our old trick and brought some snow in with us. In a big plastic tub it went. In the beginning of the winter, a tub of snow can entertain him for hours. We put a blanket/towel/spill mat underneath and, depending on the amount of snow, change it every 2-3 hours.

There is a surprising number of things you can do with a tub of snow. Budster invents most of his own games, but sometimes I give him suggestions of what we could try. Why not paint the snow? We had tried it with brushes before, but these days pipettes and liquid watercolours are Budster’s favourites, and it promised to look beautiful.

The ratio of watercolour paint to water would really depend on the intensity of colour you want. Our recipe would be a teaspoon of paint to about a cup of water for very vibrant colours. 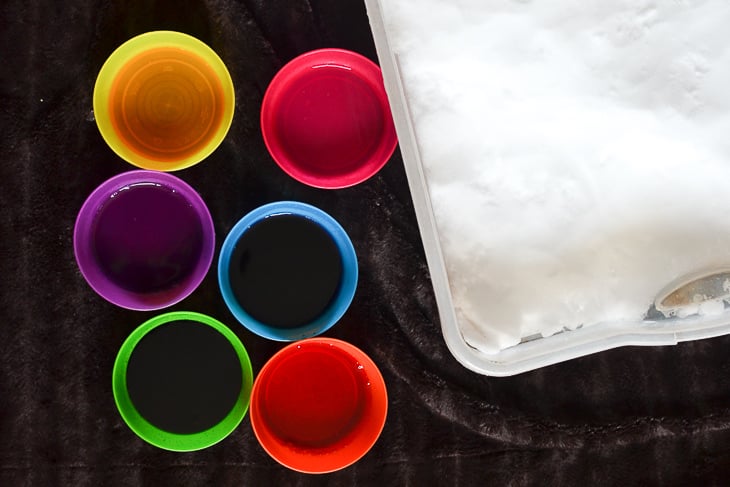 It was beautiful. A drop of paint against the snow reminded me of the story of Snow White.

A queen sat sewing at her window, which had a frame of black ebony wood. As she sewed she looked up at the snow and pricked her finger with her needle. Three drops of blood fell into the snow. The red on the white looked so beautiful that she thought to herself, “If only I had a child as white as snow, as red as blood, and as black as the wood in this frame.”

It was interesting to watch the colours mix. The snow absorbed the water instantly, leaving only pigment on the surface. Then, Budster would let a drop of a different paint fall next to it and see how they look together. 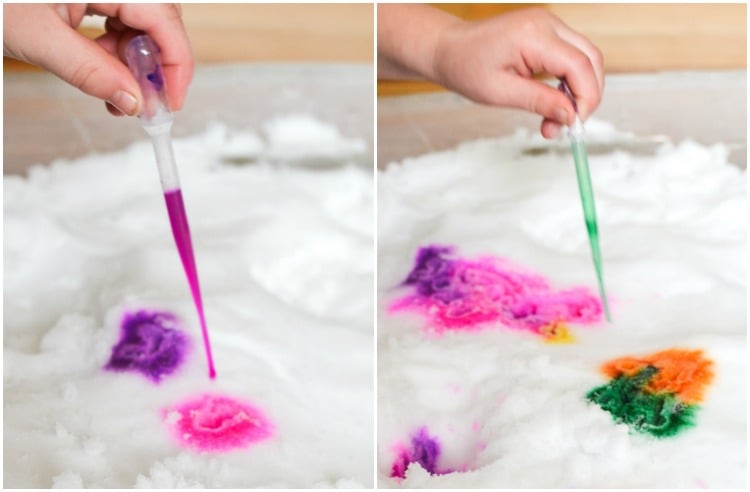 It was even more apparent when we tried mixing primary colours.The top row (photo below) are the colours straight from the bottles, and the ones beneath them are our results from mixing them. 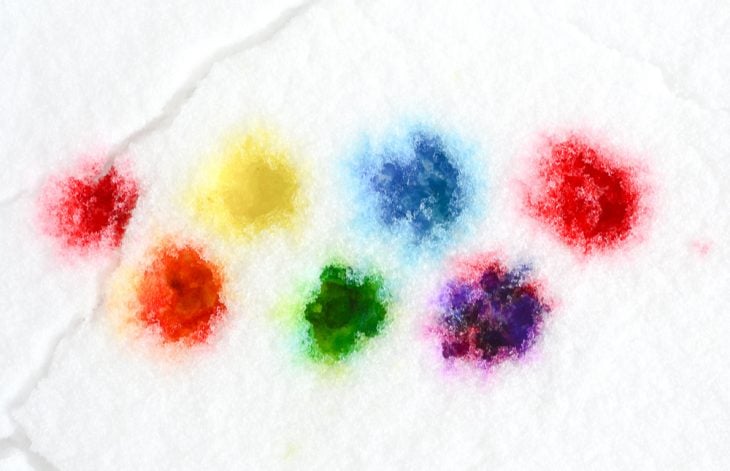 The effect became more noticeable as we packed the snow down a little. 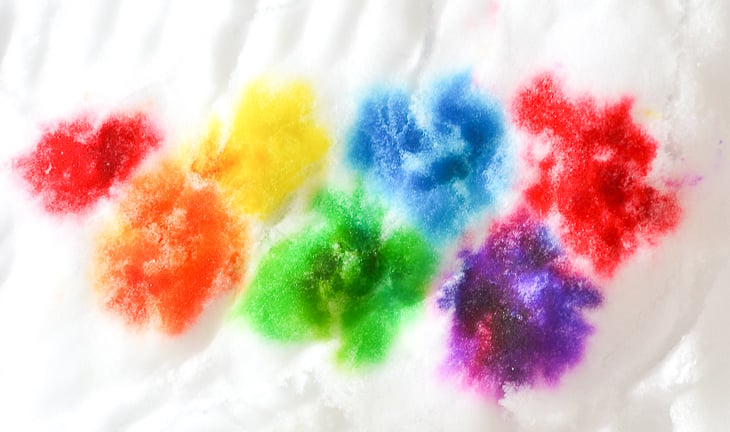 A rainbow is one impressive example of colours mixing together. 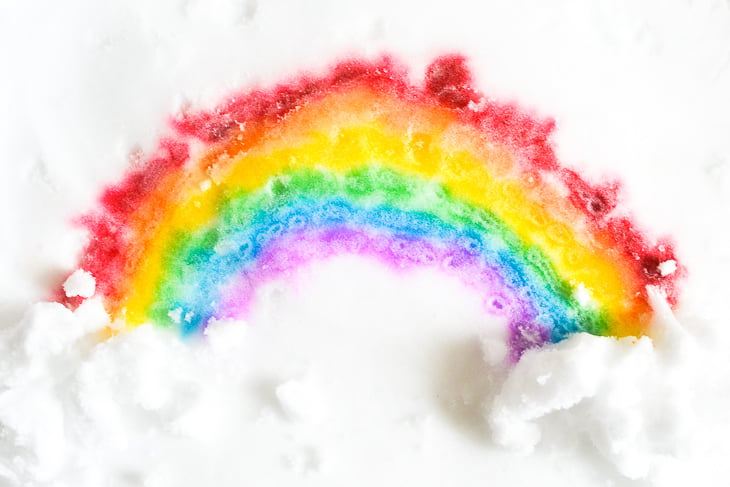 All across this big bin, snow was getting coloured and colours were getting mixed. It didn’t even look like snow in the end, but like a big canvas. But the biggest colour mixing was yet to come. Budster took out a spatula, determined to mix all the colours together for good. 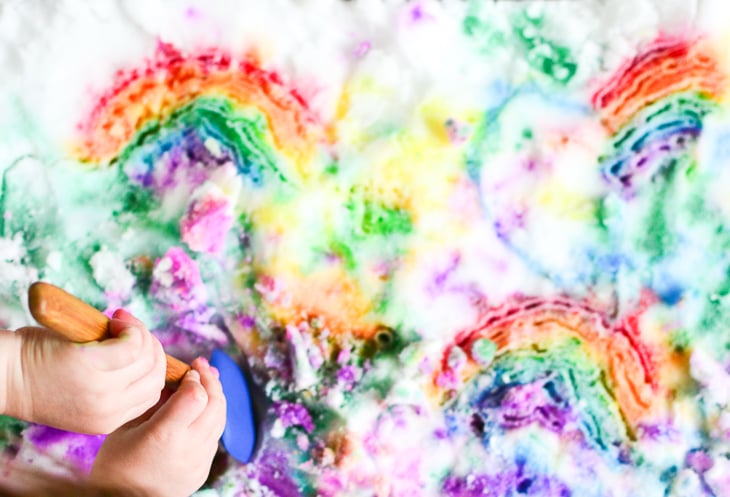 The end result made me think of a gem mountains. Probably, with dwarves mining their icy vastness. In no time, it turned into a complete slush though. We dumped the water out onto the front lawn. Let the neighbours wonder what happened here! 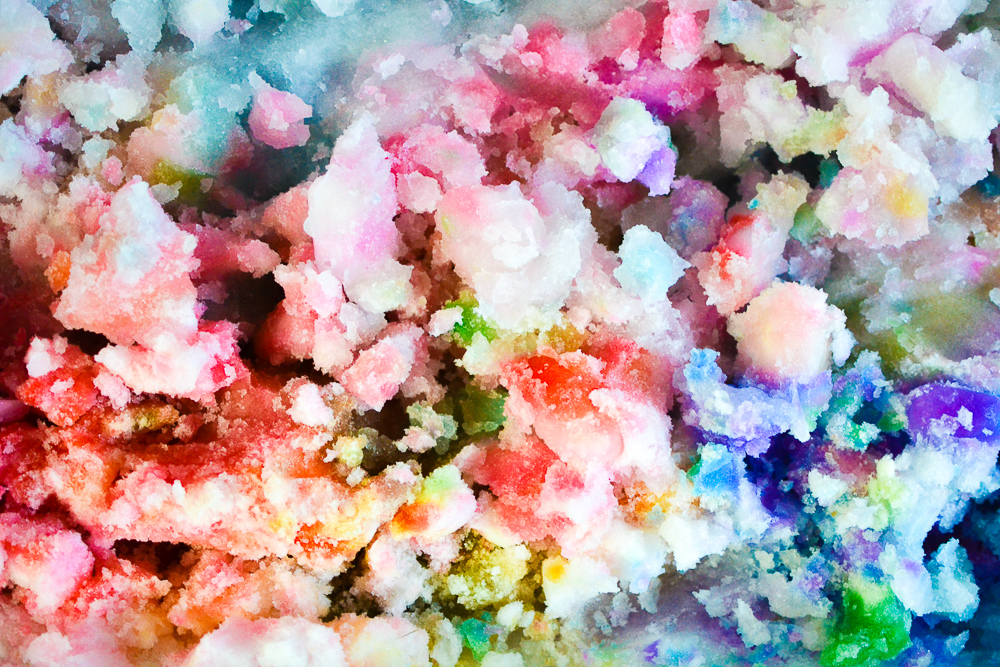 While this playtime adventure is short to relate, it actually occupied Budster for a couple of hours. And right after dumping the tub of snow, he was requesting that we refill it!