When my husband proposed to me, I had to go on a wedding ring hunt, and with such a promising start, treasure hunts have become a tradition in our family. Sometimes, for holidays, we hide gifts for each other to make the pleasure of opening them last, and for Christmas I sent my son to hunt for his advent calendar treats. Of course, Easter always brings inspiration with backyard egg hunts. It must be the thoughts of approaching Easter that planted the idea of a different kind of egg hunt in my mind.

Join our dinosaur egg hunt. It can be done any time of the year, and the fun only begins when the eggs are found, because they still need to be hatched!

Budster loves running outside, and he never misses a chance to work with a hammer (nailing is fun, and smashing is great). Dinosaurs are his latest passion. All in all, it was a perfect game for my son. But then, maybe you know some other kid like that, too? ;-)

First, I made the eggs. It was a surprise for Budster, so I worked on them by myself, but he could have joined and decorated them together with me. An older kid would have no trouble making them from scratch, with a little bit of help! The eggs are made with the kid-friendly air-dry clay. Once dry, they look like aged, fossilized rocks, but inside small dinosaurs are hidden, waiting to be excavated. While drying, a couple of the eggs developed a little crack. You can say it happened because they didn’t dry evenly since there was a toy inside, but of course, the real reason was that little creature got anxious to hatch. Budster was more than happy to help, so we decided to break one egg right away! Budster used a little hammer to free the little dinosaur. Did he ever have fun, trying to figure out how to break the egg! It solidified quite well. Once the dinosaur’s head appeared, Budster cleaned him with his fingers and brushes, then gave him to his “mommy”. Adopted mommy, anyway, since the little guy is labelled as a dimetrodon, and the big dinosaur you see is a velociraptor. The colours of the dinosaurs matched, so for Budster, it was a good enough indication of their relations. Budster wanted very much to hatch all the dinosaurs at once, but I told him that he’ll have to go on an egg hunt to find the rest of them in the yard. And who knows where those dinosaurs hide their eggs… My husband sent me on a dinosaur egg hunt for Easter a couple of years ago, and he hid one of the eggs on the roof above the back porch! I was quite a sight, climbing to get that egg. Would you like to go on a dinosaur egg hunt too?

How to Make Dinosaur Eggs

– a set of little dinosaurs

– a big tub of air-dry clay

– (optional) plastic eggs to use as moulds 1. First, I recommend putting a thin coat of Vaseline on the dinosaurs. If you don’t have Vaseline, you can try wrapping them in some plastic wrap or just leave them. Air-dry clay is water-soluble, so if some pieces get stuck to the dinosaurs, it will be possible to wash them off with plenty of water.

I also put a very thin layer of Vaseline on the insides of the egg moulds. As I noticed later, it slowed down the process of clay drying. It did dry eventually, but if time is an important factor, you may be better off moulding the eggs by hand, without using the egg halves.

2. Scoop a good portion of clay into one half of the plastic egg and stick the dinosaur inside. 5. Take the dinosaur egg out of the mould.

6. Smooth it with your hands.

7. Give the eggs some texture. I used an assortment of things that were lying next to my table: a screw for poking holes into one egg; a Popsicle stick for making spiral-like texture on the next; some glass beads for creating a polka-dot texture. I also left imprints of seashells and starfish on a couple of eggs to give them a fossil-like look.

8. Let them dry for a couple of days. The colour of the clay will get lighter, and the eggs will feel dry like rocks. You can sand or paint them if you want, but after a couple of attempts to do something more to them, I decided I liked their natural look best.

I was pretty pleased with the final price of this project: 5 lb of air-dry clay

(~$7) would provide you with twelve dinosaur eggs. Of course, there sometimes may be a shortage of dinosaurs to put inside. We already had dinosaurs from this set by Safari

I hope you will have a great hunt! 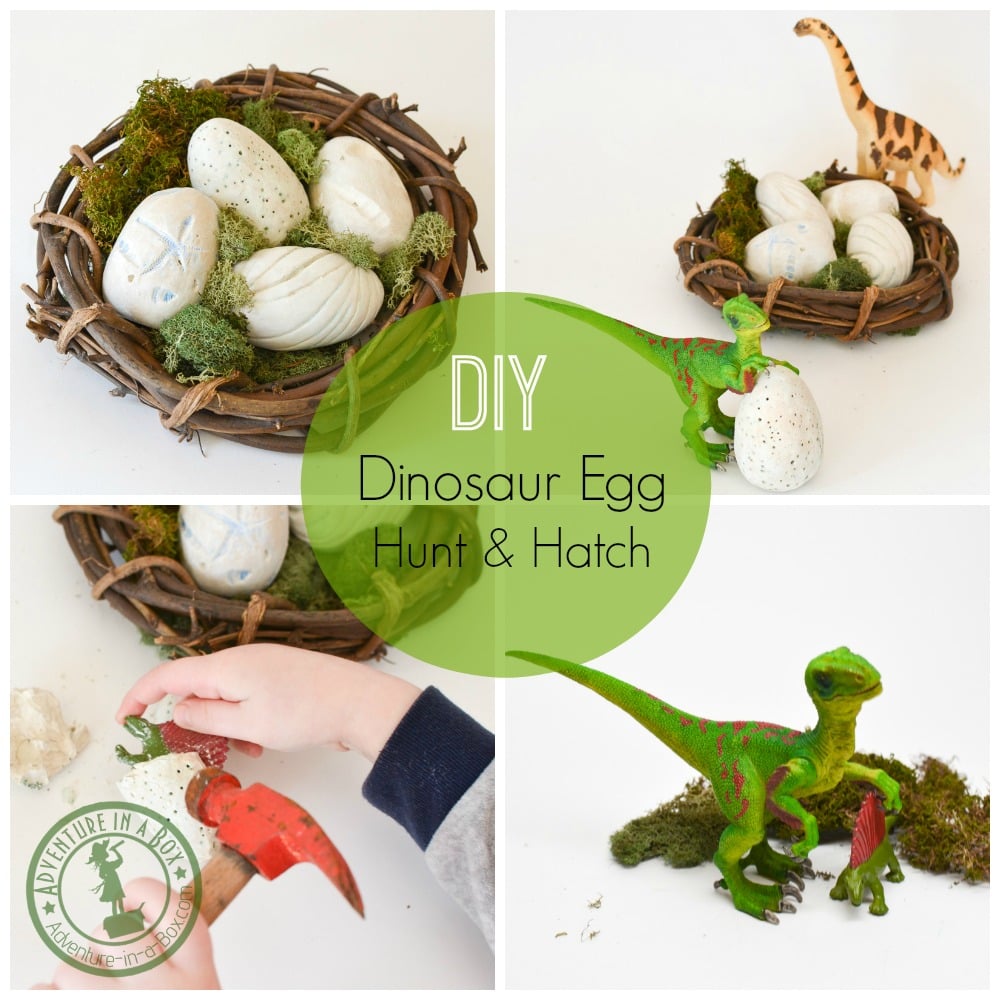