From my own experience, I know that it can sometimes be tricky to start making a drawing. Especially if I don’t have a solid concept – just feel in the mood to create something. That’s when drawing prompts come handy. Not only do they give me an idea of what to draw, but they often make me leave my comfort zone and draw a snowplow or a triceratops. Not my usual thing, but always fun to try out!

My son finds drawing prompts inspiring as well, so we often use doodle books or create our own prompts when I start a piece and he finishes it. The rainbow pompom drawing prompt is our latest experiment. 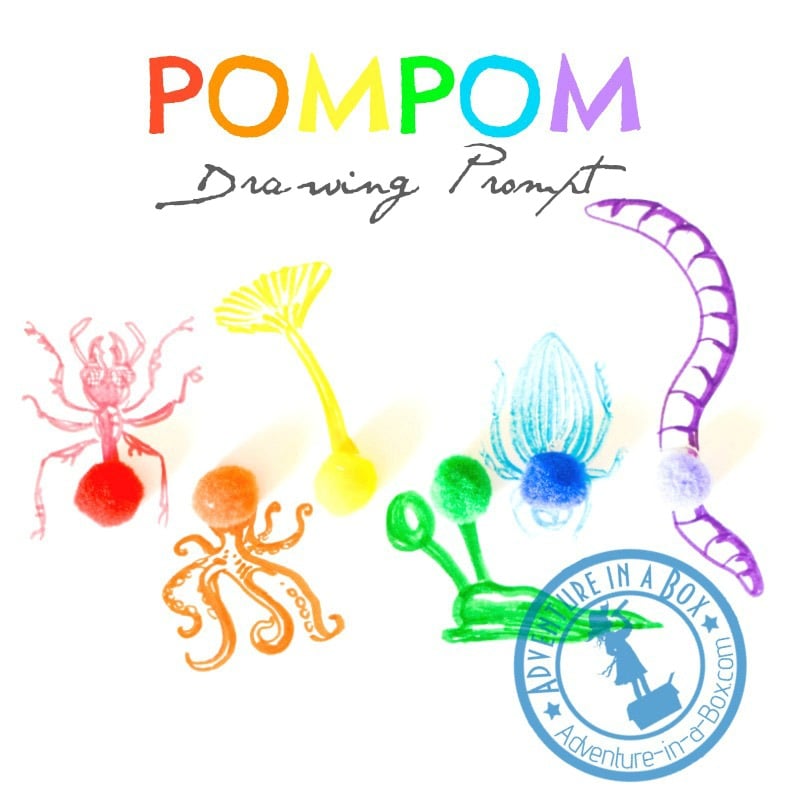 What can a row of pompoms become? A soft yellow pompom can become the body of a chick, and two round pompoms can be the wheels of a bicycle. The possibilities are various, and there is something about splashes of colour that makes little artists want to explore them. I couldn’t wait to start doodling around and add some eyes, arms, legs or tentacles to pompoms!

To create a drawing prompt, first attach a bunch of pompoms to a piece of paper – in a neat line or scattered all around. A hot glue gun is a quick solution for making the sheets ready in a couple of minutes. If you have white glue, it will work too – the waiting time will be closer to an hour while it’s setting and drying. 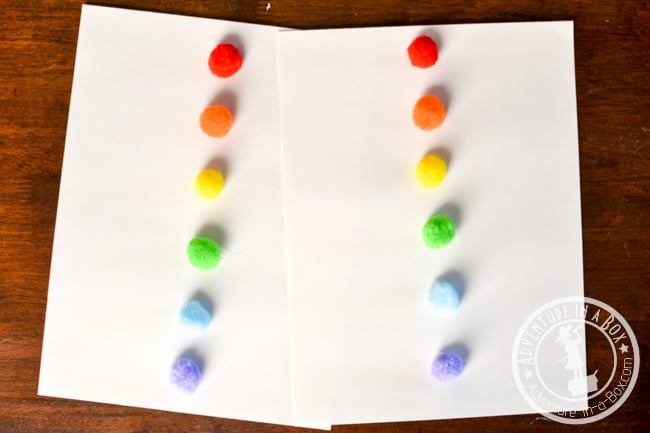 Once the prompt is ready, and the rest is up to the imagination. As you scroll down through our masterpieces, you will see that there is definitely no set way of doing it. 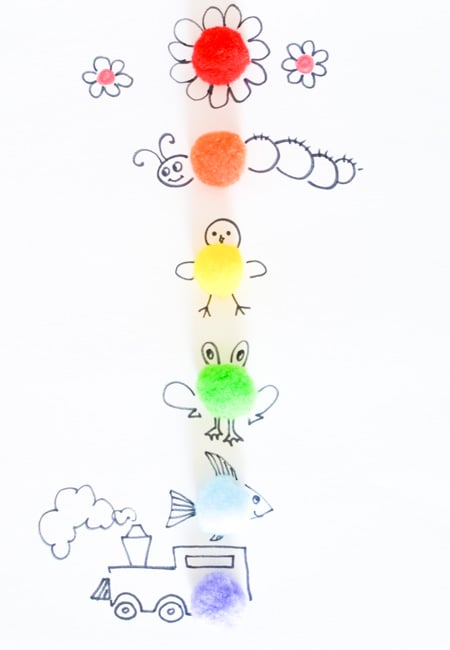 Normally, I would overthink the concept (and possibly never finish the piece), but my drawing buddy this time was only three, so the majority of my mental activity was dedicated to commenting on different colours, explaining what I’m doing with my piece and giving encouraging suggestions about his. So the pictures were simple and included things Budster could easily relate to: a flower, a caterpillar, a baby chick, a frog, a fish and a train.

I tried to match the colour of my creations as they were in nature to the colour of pompoms like yellow chicks and green frogs… but I don’t think I’ve ever seen a purple-wheeled train.  We still talked about colours a fair bit while doodling, which was the reason behind choosing a rainbow and not a single colour as a prompt. Beside the fact that rainbows always look pretty, of course! 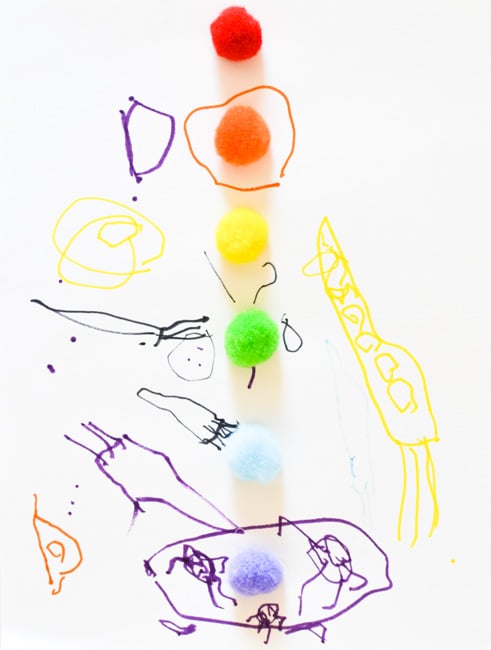 Budster started with the green pompom and announced that it’s going to be a butterfly. You can see a pair of wings as well as two antennae on his picture. Then he went to the purple pompom and made a car. The “headleggers” you see on the picture are “Mommy, Daddy and Budster, and they’re dancing in the car”. I’m not sure whether the pompom is a window or a wheel.

Later on, the car got an aftermarket addition – a purple space shuttle attached to its roof. But it didn’t happen until after Budster turned the orange pompom into a planet by drawing a ring around it and saying it was Jupiter. From that moment on, my boy’s mind ran on a familiar track. He is very fond of space exploration and spaceships right now, so all the rest of the pompoms became planets while he drew three more rockets around them.

Later on, we saw Daddy contemplatively resting at the table and quickly slipped a fresh sheet filled with pompoms in front of him. I was curious to see what Jeffrey would come up with, and Budster liked watching him draw.

From the picture, you can easily guess that Jeffrey is fond of animals. I can further reveal that, while in university, he worked for the entomology department and has always been fond of invertebrates. Doesn’t his picture remind you of a Google doodle?

So, the whole family ended up having fun with the pompom drawing prompts.  The finished pieces have a mixed media quality which gives them a certain advantage over our other everyday doodles and the privilege of being  displayed on the fridge for a while.