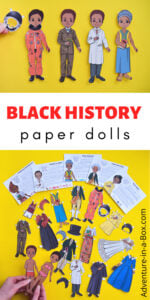 Celebrate Black history with kids while making a set of printable paper dolls of fifteen Black people who changed the world!

Children like dolls. There is good reason for it – they are relatable and fun to play with! My preference for educational settings is for paper dolls, because they are easy to store and make costumes for (definitely easier than vinyl dolls!). Nevertheless, they serve the same purpose of making the subject relatable and interesting to children.

The topic of Black history can be particularly difficult to tackle with younger children, since it involves a lot of hurt and mistreatment. But the Black history paper dolls can make it more accessible for the younger crowd. They will get to know the names amazing Black men and women from history, learn about their great achievements alongside their struggles, then make their costumes for a selection of boy and girl paper dolls.

When talking about important historical figures, do costumes really matter? Certainly not as much as all the biographical details that are included on the accompanying cards, as seen on the left below. The cards have the name, date and place of birth, and a short chronological outline of the most significant achievements and struggles for each historical figure.

Do you know who won 4 gold medals at the Berlin Olympic games in 1936 (and made Hitler’s claims of Aryan supremacy look ridiculous)? Who introduced the idea of crop rotation to the farmers of American south? And who led over 70 slaves to freedom before the Civil war, then saved hundreds more during the war? Those are the facts you will learn from these biography cards.

But costumes matter too. They give an interesting historical and cultural perspective on these people and their time. So, there is a separate information card included for costumes.

Did you know why people in the 18th century used to wear wigs? Joseph Bologne’s card explains it! Or you might notice that both Harriet Tubman and Mae Angelou’s costumes come with headscarves. If you read their cards, you will learn that turbans hold a lot of significance for these women.

Get this Paper Doll Pack Here!

Select a free printable paper doll that looks like you, from a big pack of diverse paper dolls! You can also colour your very own.