Birds: Games and Crafts for a Toddler

After studying our inspiring book on birds, Birds of a Feather, it seemed natural for us to play a few games with birds.

Budster is very fond of birds at the moment, and if he takes after us, there is a good chance he will stay this way. His favourite birds are seagulls, and he never misses a chance to talk to them. “A-a-ak! A-a-ak!” In all of the books, he would find a tiny triangle in the sky and say, “A-a-ak! A-a-ak!” So I thought of giving him an opportunity to paint his own seagulls.

Well, strictly speaking, the seagulls were painted by me. I used Miskit Liquid Frisket

to mask the white spots in shapes of seagulls on paper. I keep this bottle for occasional watercolour paintings – and for masking spots on Budster’s art once in a while. It works excellent with watercolours. As for gouache and tempera, a thin layer is preferable, but it would work acceptably with toddler’s thick and expressive brush strokes. 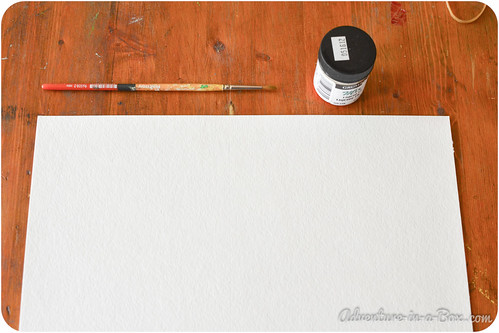 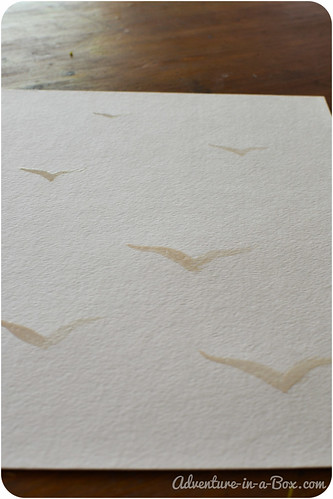 I outlined the seagulls for Budster to see, prepared his working space and showed the birds to him. 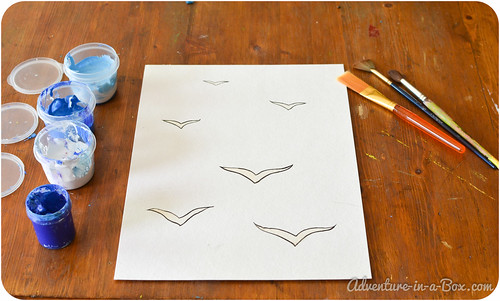 He thought it would be a worthwhile idea to cover seagulls with blue paint, which I placed on the table. So he went on painting with blue tempera. 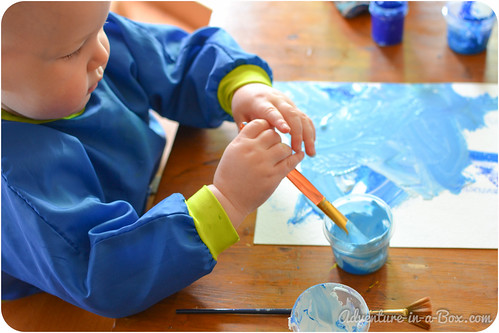 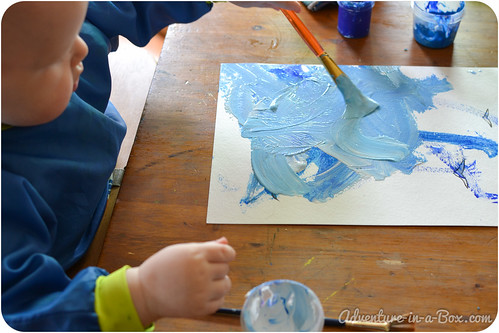 After Budster was done, I left the paint to dry. Because it was thick with layers of paint, it took several hours. Afterward, I used an eraser around the spots that were originally masked. As the seagulls emerged, Budster welcomed them with a happy, “A-a-ak! A-a-ak!” 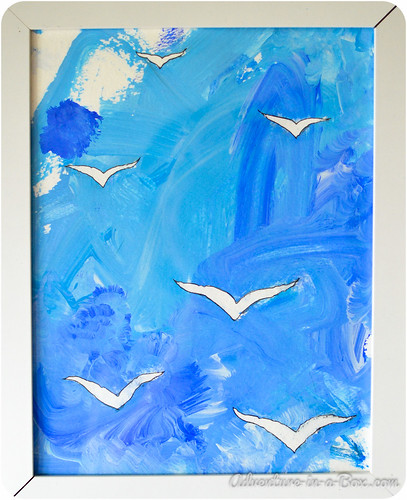 Another sunny day, before heading outside, I remembered how in my childhood we used to make paper planes. Then we would send them in the air and see which goes furthest. I thought Budster would enjoy it, and I made a paper plane looking like a bird. 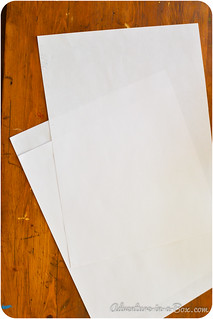 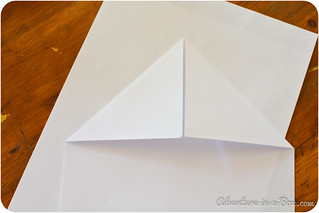 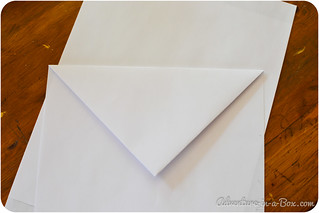 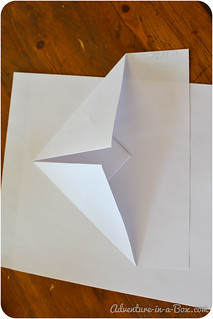 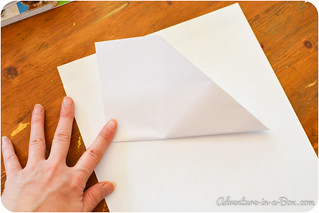 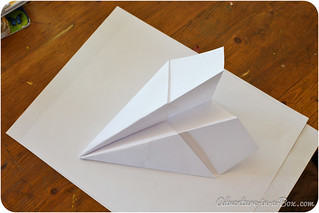 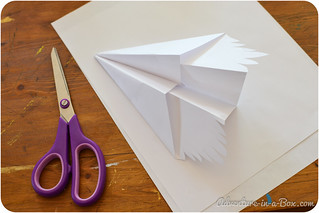 Budster was very excited about the paper bird flying around our yard. He liked running after it and bringing it back. He tried to send it in the air, but it did not fly far. Oh well, it was a fun bit of entertainment for our walk. The two “birds” I made stayed outside on our veranda, and we visited them for the next couple of days, until it rained. 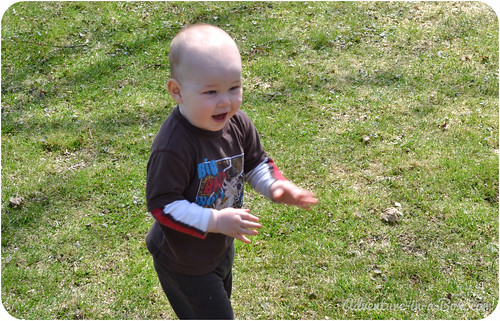 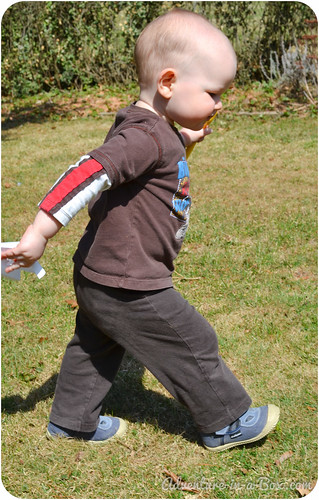 Inside, we turned our water/sand table (made in this post) into a bean table. We got a colourful bean mix to try a while back, and Budster got to feed birds from his play-set (Safari Ltd Backyard Birds TOOB

) with beans. There was a red cardinal in a red cup, an indigo bunting in a blue cup and a yellow warbler in a yellow cup. I like that his toy figurines are more or less accurate replicas of existing species, and all of these birds can be seen in our area. 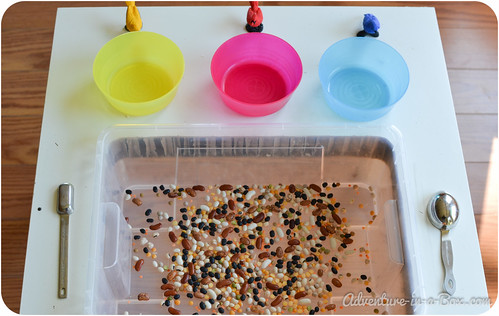 Budster’s passion for birds started with him watching a bird feeder, where different birds came every day. While we rarely see an indigo bunting or a yellow warbler, we have a red cardinal living in the yard, and a male and a female come to our feeder regularly. They are very cautious birds, but Budster sees glimpses of them here and there and likes pointing at red birds in his books.

So, he chose a cardinal to feed first. It is touching to see his first attempts at pretend games: he likes feeding his animals by lowering their heads into whatever symbolizes food. 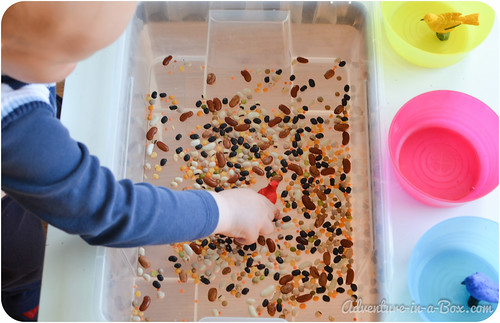 Then he tried different spoons and poured beans into cups for all the birds to try. If the spoon did not work, he used his hands, rolling black and white beans between his fingers. 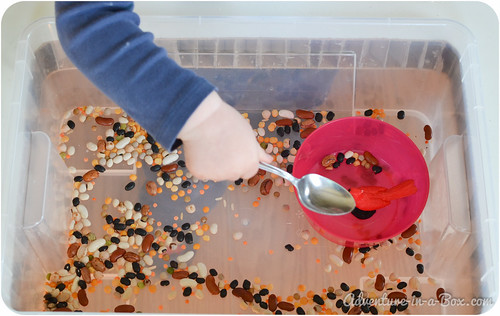 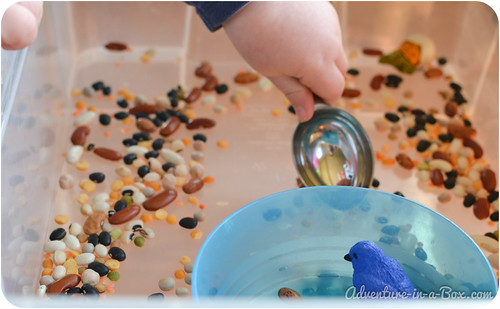 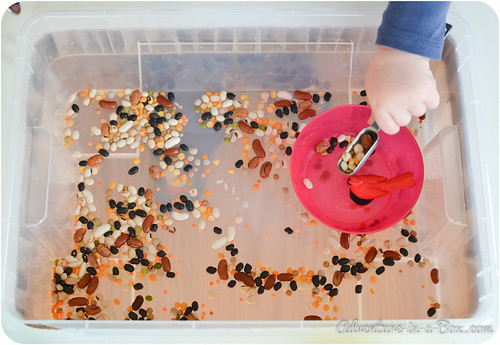 We like our birds. In the next post, we are going to build a house for them DIY Project: How to Make a Toy Tree House.