Did you know that one of the most popular English children’s books nowadays was completed using only fifty words? Dr Seuss did just that in creating Green Eggs and Ham

, as a result of a bet with his publisher.

Amazing! However, upon my first meeting with the masterpiece, I was not as impressed – I was puzzled. Some creature named Sam-I-am is cajoling, persuading and pestering an unnamed guy into eating green eggs and ham. The later would rather drown than eat them. But in the end he tries them, and he thinks they are the best thing ever. The end.

As a child, I had never heard of Dr Seuss, so my meeting with him happened when I was about twenty, watching the old cartoon, The Lorax. I also enjoyed Oh, the Places You’ll Go!, but Green Egss and Ham seemed so much stranger. The story did not make much sense to such an adult as myself. But my husband proclaimed it was his favourite book when he was a child, and Green Eggs and Ham started living on our shelf.

We have both a board book and a full version. Unfortunately, all of Dr Seuss’ board books I have seen are abridged, and most of them rather awkwardly so. As a general rule, I do not buy abridged versions of books – I think that it is better to simply wait until the reader is ready. But this one ended up in our house by accident, and we actually like it. The part that was abridged is relatively small, and because the book is a repetitions of phrases, “Would you? Could you?” and responses, “I would not! Could not!” the cuts are not noticeable. With the shorter text, the book is a perfect length for young toddlers, who appreciate the limited vocabulary and the engaging lift-the-flaps. Budster was in love with this book around his thirteenth month, but of course, he still wants to read it and open the boxes and houses. 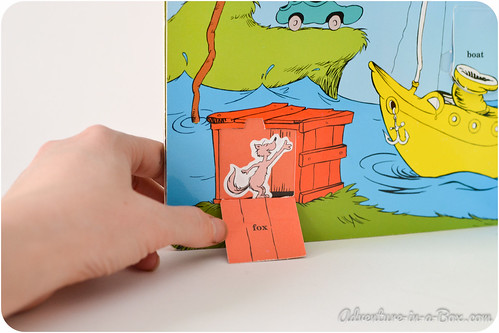 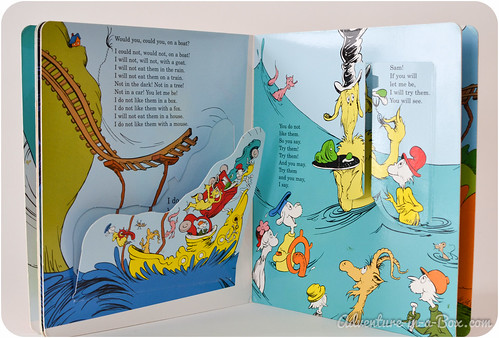 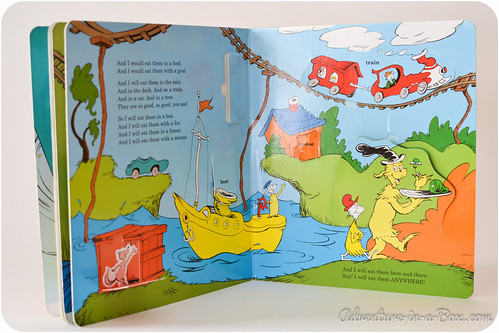 Eventually I fell in love with Green Eggs and Ham too. When I read this book, I often have an association with singing a song: such a perfect upbeat rhythm!

At first glance, Emily Gravett does not have much in common with Dr Seuss, so why put her in the same post? Well, for one thing, she illustrates her own books. However, this is not uncommon. The reason why I thought about these two authors together was because we recently bought a book with only five words in it. Orange Pear Apple Bear

I have been a fan of her illustrations since reading Cave Baby, and could not overlook her book in a store. At first, I was not sure whether Budster had already outgrown Orange, Pear, Apple, Bear or not, for most pages featured a big picture of one object and one word. However I took it, and on the closer look I am glad I did.

It does use only five words. Actually, mostly four. 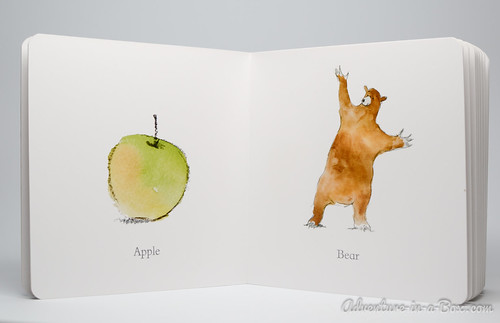 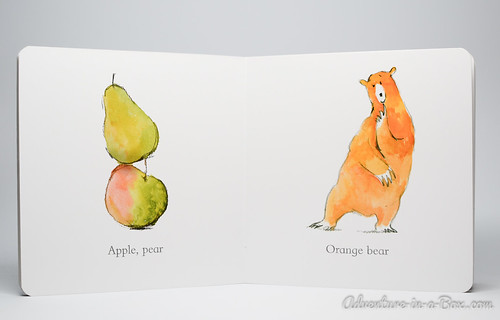 The watercolour illustrations are lovely and imaginative. Think of an apple bear! That bear is a real character too, which is something you can tell while looking at the illustrations. With only four words in use, her pictures have to be worth a thousand words. While operating few words, the book demonstrates a few interesting linguistic phenomenas to the youngest reader like: punctuation matters – and can even change the colour of a bear.