Should Boys Play with Dolls: a Dad’s Perspective

When I was a kid, my sister was always after me to play dolls with her. “Sure, I will just grab my BB gun,” I would say. She even bought me a Ken doll as a birthday gift one year, in an attempt to rope me in – at an age when news of it would have been socially disastrous! It wasn’t that I didn’t love my sister; we had great times making mud pies, drawing and even playing with stuffed animals. Just not dolls. 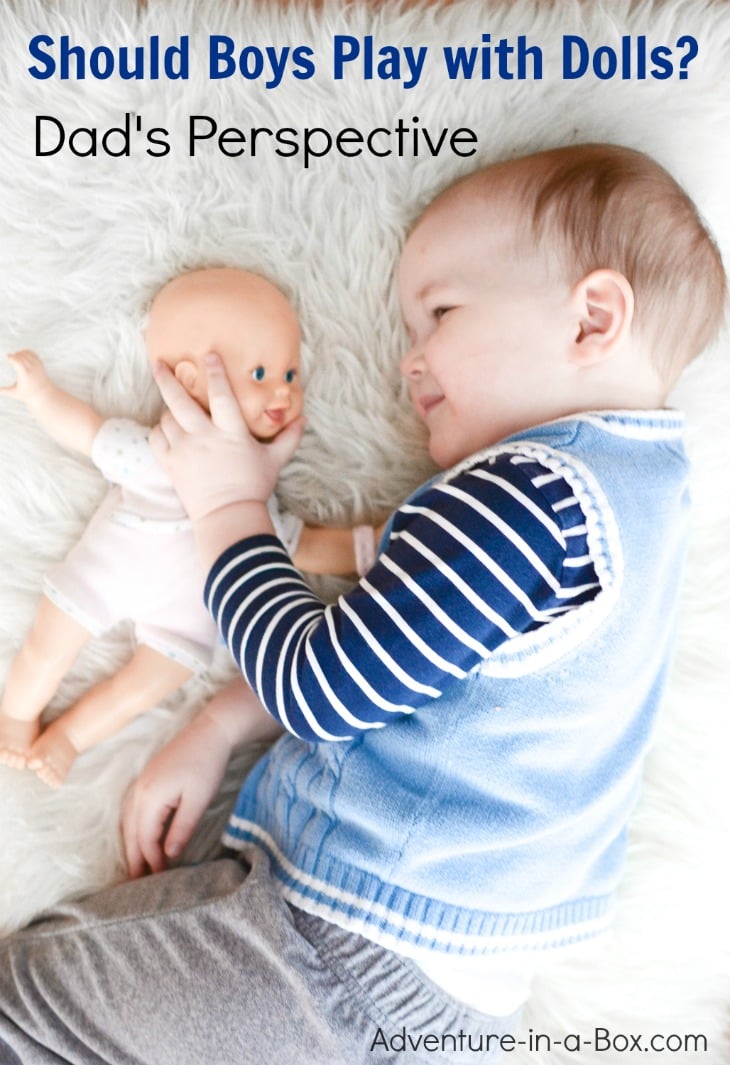 You might think that with the preferences of my childhood, I would have matured into the sort of father who is afraid of his son “turning onto a pansy” from wearing pink or playing with dolls. Fortunately not. When my wife returned from a garage sale with a cute little pink stroller and dolly combo for Budster, I admit I thought it was hilarious how he steered it like a rally car. He would also tip out the doll and then head off with the stroller like it was a wheelbarrow and he needed to get another load of dolls to dump. I told Liska that the only reason he liked it was because it had four wheels, and that he would forget about the doll until he was old enough to experiment on it with a magnifying glass or hobby knife.

Well, I was wrong. Wheels still qualify at the top as essential anatomy for his favourite toys, but the stroller has fallen out of favour, and the doll, Baby, is his new pal. As I have watched him play with his doll, I have noticed some unexpected and positive developments that I think are worth sharing:

1.Budster likes to speak to his baby, and he uses some words and grammatical constructions that don’t often make it out of  his passive vocabulary. “Sleep, Baby! Sleep!” is a good example – he studiously avoided the word and the act before rediscovering his doll, and playing at putting it to bed. He seems to have become more comfortable with the notion, as a result. Budster loves reading to his baby and pointing out different objects to him. Just like we do!

2. He plays games where the doll represents him, and he acts as a parent. Then he puts his doll to sleep, and feeds or dresses it to his own preferences. Theoretically, it helps him to take another person’s point of view, and it is the beginning of an important skill of empathy. Further, through reenacting and play, he processes his reality and better understands how everyday life works. As his knowledge of the world around him develops, he will play at store, doctor, school, etc, but his first step is to play at what he knows best, after two years of having been a baby.

3. Additionally, he learns a few useful practical skills: like dressing and undressing. He cannot yet put on his own shoes, but he is one step closer for having put on his doll’s shoes.

4. Often Baby is less like a baby and more like a friend to Budster. It was during his best friend’s absence over the holidays that he started lugging the doll around with him, so it may have begun as a surrogate. What differs from his relationship with other children is his conspicuous selflessness with his doll. He shares without prompting, and will stop a fun activity (like jumping on the couch) in order to give Baby a go at it. It is pretty touching! Feeding his doll. Apparently, chocolate is the best food for babies.

5. The other side of this coin is particularly interesting. The doll is such a respected friend that it also acts as a role model. He trusts the doll (it likes the same food as him, the same games and the same toys as him, after all) and wants to do what it does, even if the same suggestion from us would be uninteresting or irritating. “Baby wants to take a bath? I’m in! Baby likes to pet the toy cow? Well, maybe I will stop throwing it for a while and pet it, too.”
6. Can you think of one more benefit of having our son toting a doll around? Now we know for sure he is ready to be a big brother, when the time comes! Perhaps we tend to think of dolls as plastic babies for little parents-in-training. That’s commendable enough, but Budster’s experience has shown me that dolls offer potential beyond developing a nurturing skill set. They can become props in social experimentation – experiments that improve a child’s understanding of surroundings, relationships and perspectives. So, are dolls really wonder toys that should be played with by boys and girls alike? My short answer is yes. My long answer is that it probably depends on the preferences of the child in question, but you won’t know unless you have tried!
If you want to stay updated on new stories from Adventure in a Box, consider subscribing to our Facebook, Pinterest, Twitter or Instagram pages.