Last week we decided to check out the aquarium that opened in Toronto last fall. Budster is very curious about the animal world right now, and it seemed like a good place to show him something new. Not that he had not seen fish before – there were aquariums at the zoo and the aviary we visited over the last months – but he definitely had not seen it on such a scale. I admire the game that exists in some families: when you go to a museum, find three interesting facts there that you can share with other members after you leave. I hope we will do it in the future as well. But, to be honest, this time it was such a powerful visual experience that simply seeing the underwater world, carefully replicated indoors, was enough to make my head go round.

I have never thought piranha was such glamorous fish. 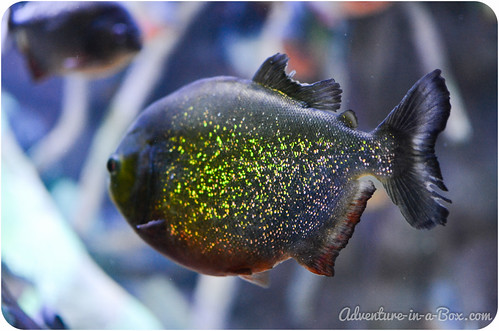 The jellyfish is queen of lace and frills. 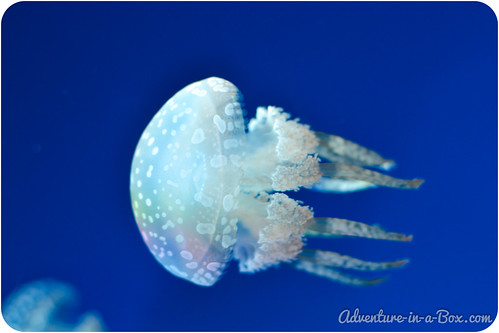 The lionfish was my favourite. 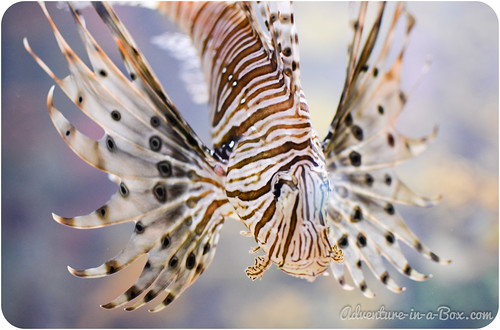 Budster spent two very busy and exciting hours in the aquarium. There were several different halls called Canadian Waters, Rainbow Reef, Dangerous Lagoon (with sharks, stingrays, saw-fish etc), Ray Bay, Exotic fish (different species from around the world) and Jellyfish. Whenever Budster entered a new room, he would act bashful and ask to be picked up, exploring first from the safety of our arms. But minutes later, he would feel brave enough to venture on his own. 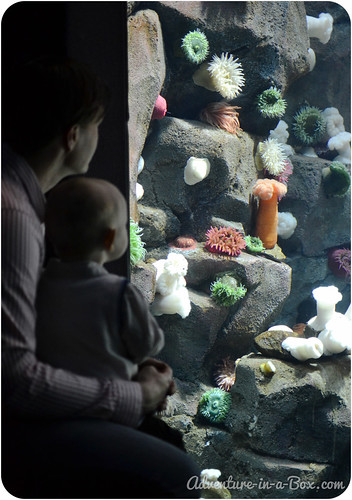 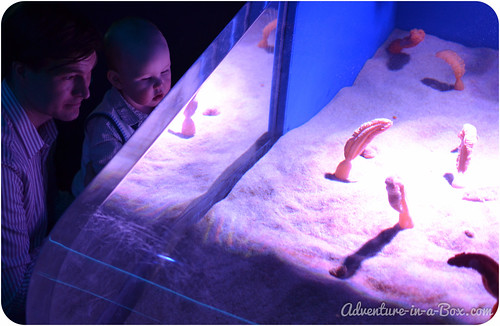 The dangerous lagoon was the most impressive part of the aquarium with fish swarming around you top, left and right in a 2.5 million litre aquarium, and we spend the most time there. After a while, Budster began to feel so at home that he began exploring… and found the emergency alarm button. We beat a hasty retreat. 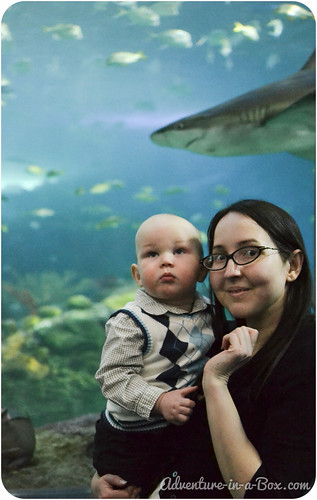 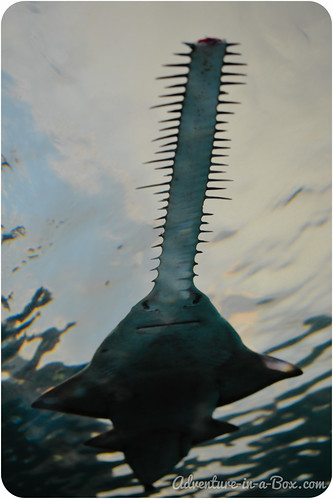 He enjoyed every minute of time spent in the aquarium, pointing at menacing sharks and cute golden fish, reaching for octopus tentacles behind the glass and patting bamboo sharks in the tanks. I have patted a shark too, ha! In the discovery room Budster spent a fun half-hour playing with a Great Lakes shipping model replete with canal, locks and little foam boats, turned wheels and gears, and spoke into a submarine loudspeaker, “DA DA”. His Dada enthusiastically kept him company. 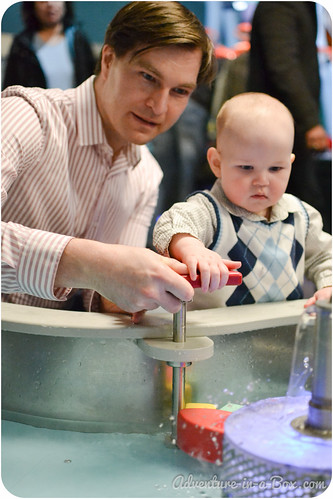 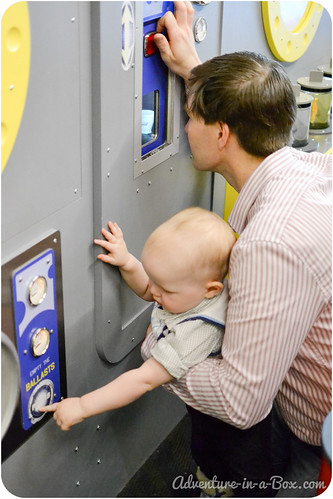 After we left the aquarium, Budster fell asleep right away – an unprecedented event, considering it was already late afternoon. I wonder if he kept playing with fish in his dreams, maybe getting a ride on a shark’s back.

That evening, already in his pyjamas, Budster got a gift – the book Sounds of the Wild: Ocean

by Maurice Pledger. This books is a part of the series known for offering colourful panoramic illustrations of natural life with pop-up elements and sounds alternating with pages naming and describing the different animals in the pictures. So, if you do not know the name of the beast, you can look it up on the next page and read a little bit of additional information about it. 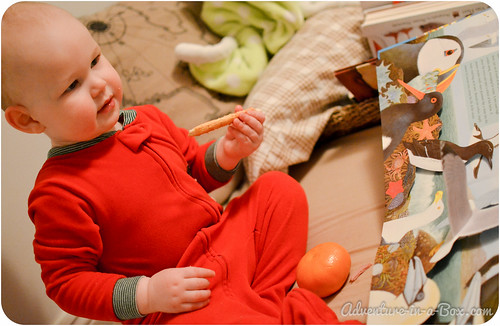 Budster and I are both learners when it comes to reading this book. He would point at different animals, and I would tell or read their names. Sometimes we take his play-set of miniature ocean creatures and find their painted counterparts in the book. 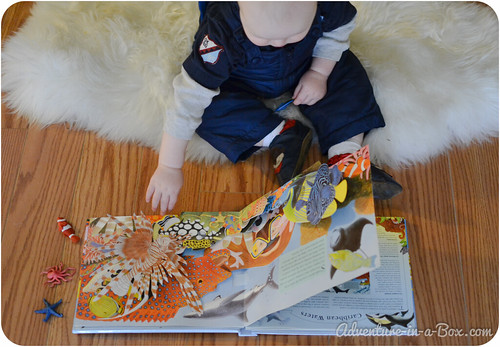 But, most of the time, Budster opens the book again and again on the page with whales and listens thoughtfully to a soothing song from the biggest animals on Earth. Then he skips to the last page, with seagulls screaming above the sea, “A-ak! A-ak!”, and screams back at them. All of a sudden he is in love with seagulls and strives to talk to them, whenever he sees a bird fifty meters in the sky. Fortunately for him, they are a big part of this ocean book as well. 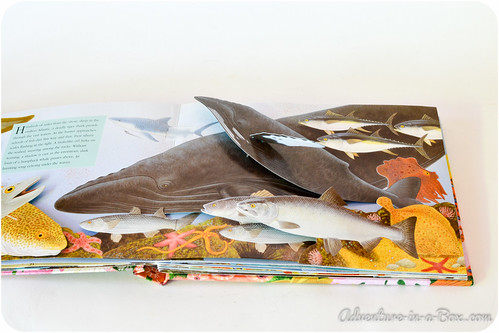 We happened upon another book of ocean life by chance. At the box book sale I picked up a giant book with beautiful photographs of ocean life. It was called Spirit of the Ocean: Discover the Beauty of Our Underwater World

by Daniel Gilpen and hardly fit in a box. It was no surprise that it did not fit on a bookshelf either, so it was standing next to it, when Budster found it. He wanted to read it, and when the book opened, he stood mesmerized in front of it, as if he had been back at the aquarium. Since then his daily ritual includes looking through this book and pointing at all the creatures on the pages. There is something touching about my little boy, standing in front of this giant book and admiring dolphins, turtles and all kinds of mysterious fish, the like of which I have never seen in my life. 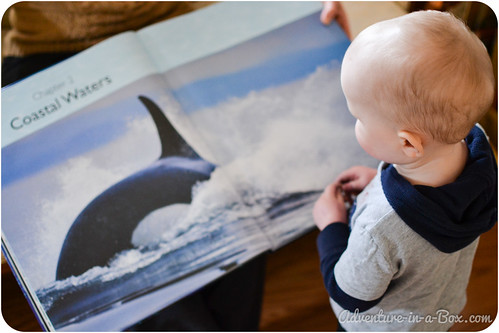 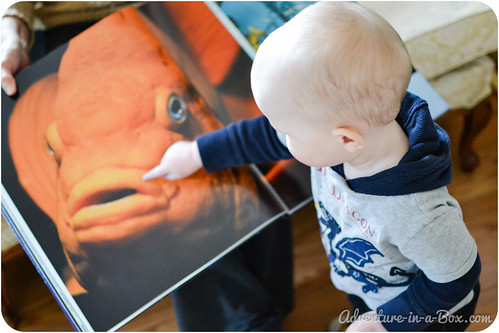 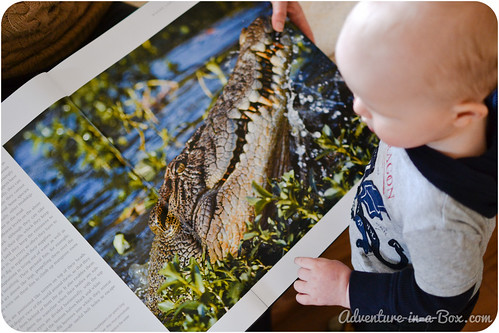 It did not take long before we made our own small aquarium. I took out our newly made water table and poured water in the tub, adding a tiny bit of blue food colouring. Then I arranged stones, seashells and a bit of parsley to create a welcoming home for animals. Animals went last: there were a couple of fish, an octopus, a turtle and a tiny frog – some from the Safari Coral Reef Toob 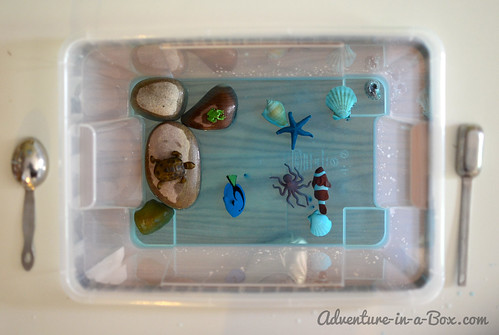 When Budster saw his aquarium, first thing he did was run to his barn toy and bring a cow. I do not know why. Did he think the cow wanted a drink? After the cow took her place in the front row, Budster went fishing with a spoon. 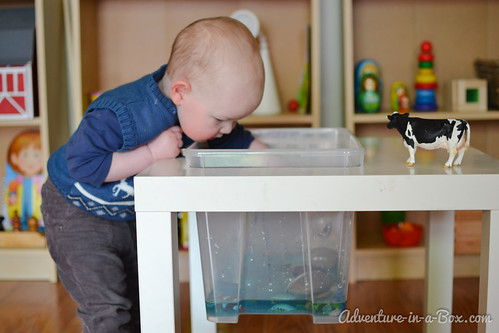 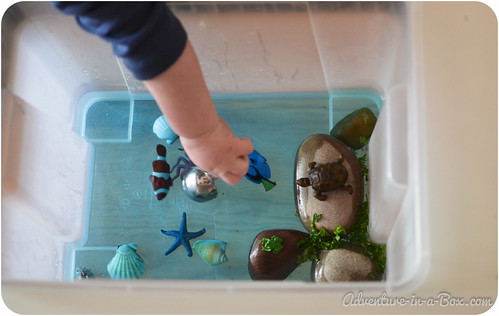 Success: he got a turtle! 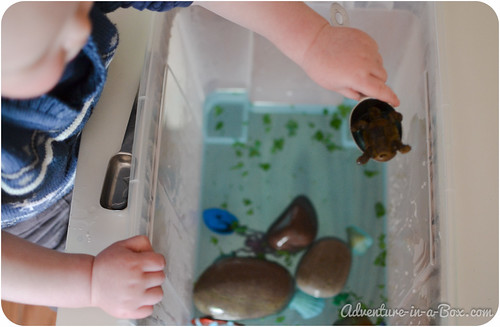 When Budster was satisfied with his catch, he put the cow inside and bent her head, offering it a drink. Then he left her there, and off he went. 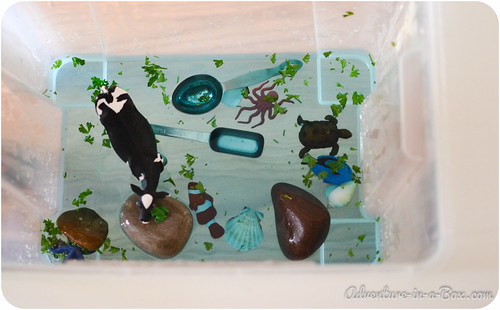 He has come back to his aquarium many times since. He goes fishing persistently and brings back to us a big catch that could feed us all, except Budster returns it to an aquarium, after hearing the animal’s name. He is fishing for names, and I hope that next time we go to an aquarium he will be able to confidently identify a lot of its inhabitants.

If you liked this article, you may also be interested in:

– Winter Time in the Small World