For our son’s first birthday, we built him a toy wooden barn. Since then, it has gone through extensive play testing – indoors and outdoors, on both sides of the country. So we figured it’s high time we showed it and offered some guidelines to anyone who feels inspired to build a handmade toy barn. 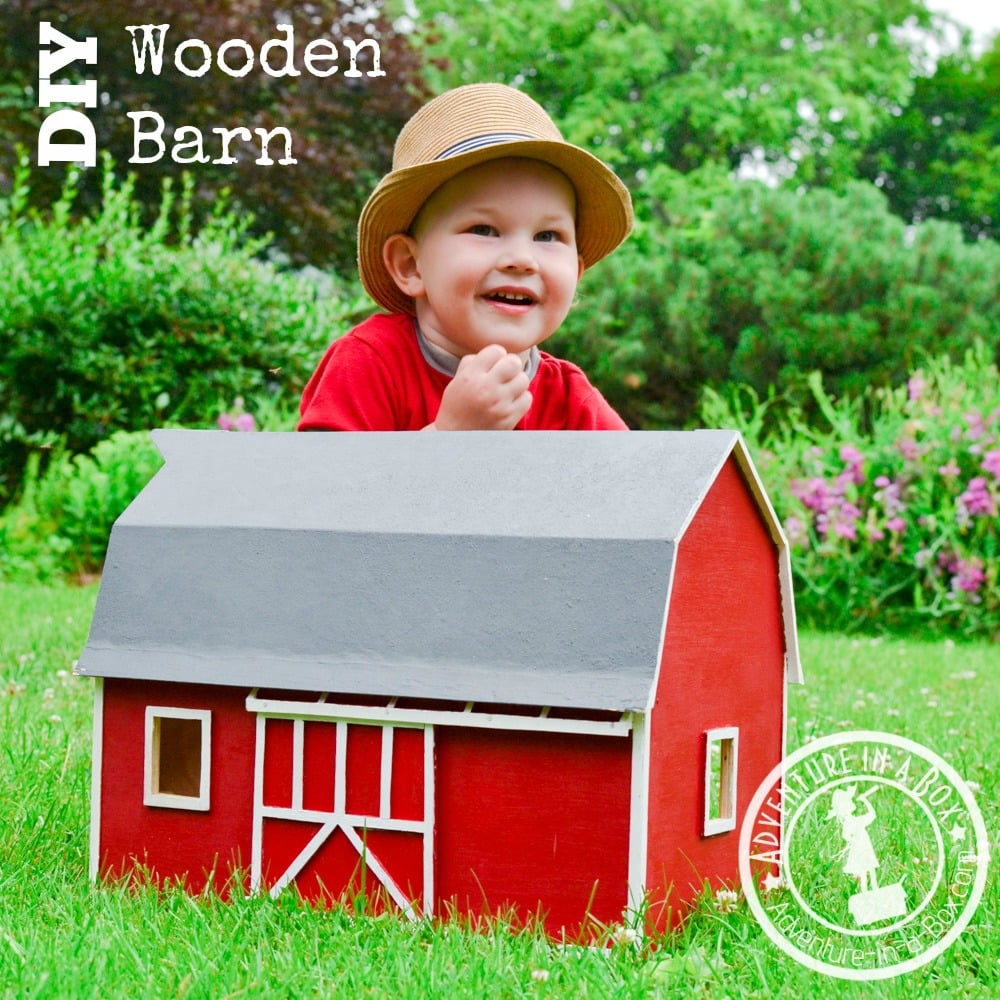 As a rule, we finish our projects, then write about them within a week or two. This project is a clear exception. It’s older than the blog. However, it still looks good, gets played with and dropped on the floor regularly. It also shelters a lot of animals. Mostly it’s inhabited by the farm crowd, but once in a while, dinosaurs pay a visit or a dragon lands on its roof. In the summer, it’s fun to take outside to let the animals graze, and in the winter it has a privileged place on the play shelf.

Farm animals are a staple in the play world of little kids. They are such important playmates that we strive to teach a little barnyard polylingualism to even the smallest babies. “A cow says moo, a sheep says baa…” Jeffrey and I have made a few jokes about this traditional approach: after all, so few of us encounter those animals in the flesh until much later in life. But from the first “moo”s to learning about animal’s habits, they’re sure a fun source of imaginative play. And for our family, especially for my husband, barns hold a special place. Before we met, Jeffrey used to have pigs, chickens and ducks, and he always talked very fondly about this experience. We hope to have a hobby farm again one day, where our kids can raise animals, and what better way to practice than with a toy barn! 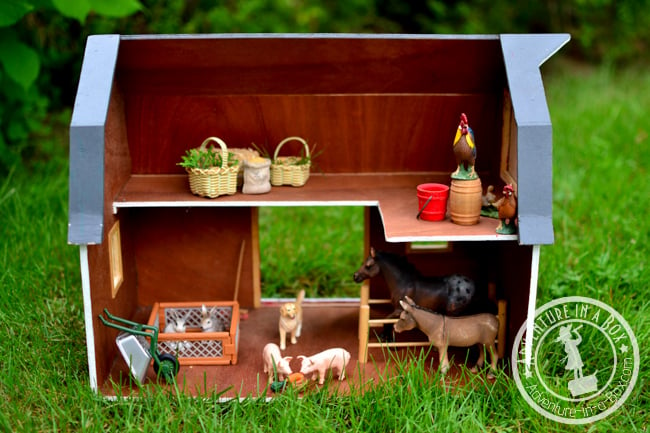 As is generally the intention where barns are concerned, our animal stock has really grown over the last two years. We have yet to have The Talk about where baby animals come from, but from Budster’s experience, he probably assumes that they come in stockings at Christmas time, or hatch from Easter eggs in the spring. We prefer the quality of Schleich toys, and that’s where most of our animals came from. Here is our cow, donkey, horse, pig, rabbit and rooster. They’re very realistic for their size, and we often use them as models for drawing sessions. For the most part, all the animals are scaled reasonably well. When we started building the barn, we had the horse around and checked how well it fitted inside several time, so in the end we scaled the building according to the size of these mini-figurines, not the other way around.

To flesh out our animal collection, we have also purchased some North American wild species from Safari Toobs, which are a solid economical alternative.

We also made and bought a few accessories for the barn, so the animals could lead a pretty comfortable life with a variety of feed, stables, pails, baskets and garden equipment. Some of them came from a Schleich farm advent calendar we opened a year ago: a rabbit cage, a sack of grain, a bunch of carrots, a wheelbarrow, etc. It was a lot of fun! Schleich has a few non-seasonal farm sets as well like this animal care set or this petting zoo set).

Aside from that, I like to check the shelves of dollhouse miniatures in hobby stores. There are usually a few unfinished objects that can be bought in bulk and customized for different dollhouse projects. This is how we acquired a selection of baskets, buckets and wooden barrels. In the past, I also used them in this fairy tree house and this dollhouse in a box.

My son has always been fond of the food theme in his games, so he likes feeding his animals, and miniature food is always popular. But then, freshly picked grass is just as much fun! Here Budster is making a carrot cake for a rabbit’s birthday party. 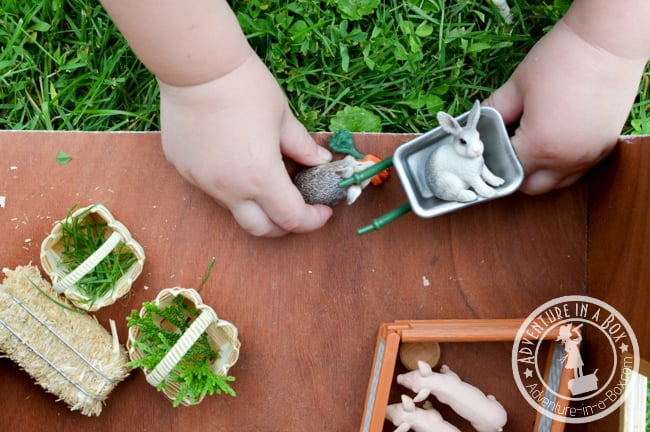 Schleich plastic fences came with the advent calendar, but before that we made our own with dowels. We use both because – oh, those animals sure like to run away! If you want to make some fences  like we did, you’ll need two diameters of dowels: 1/8″ and 5/16″. Cut the thicker one into four pieces, each about  2 1/4″ long. Cut the thinner one into eight pieces about 5″ long. Drill the holes in the thicker dowels and glue the thinner dowels in to form an enclosed pen. 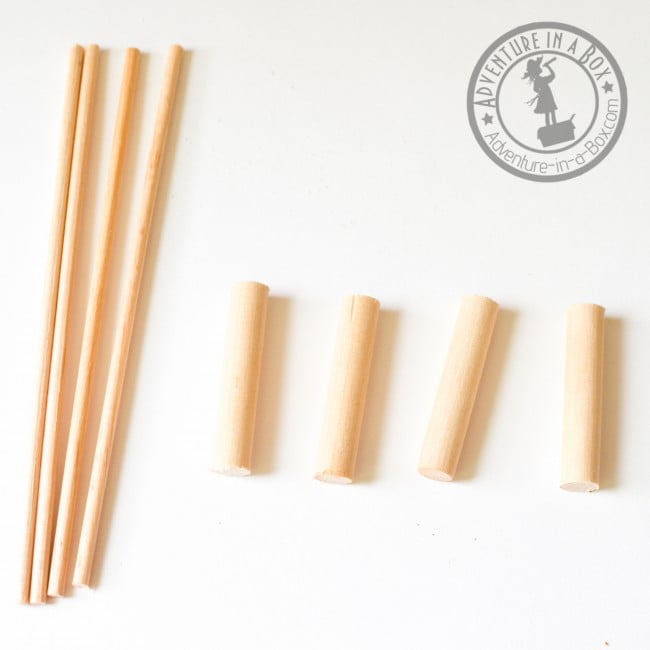 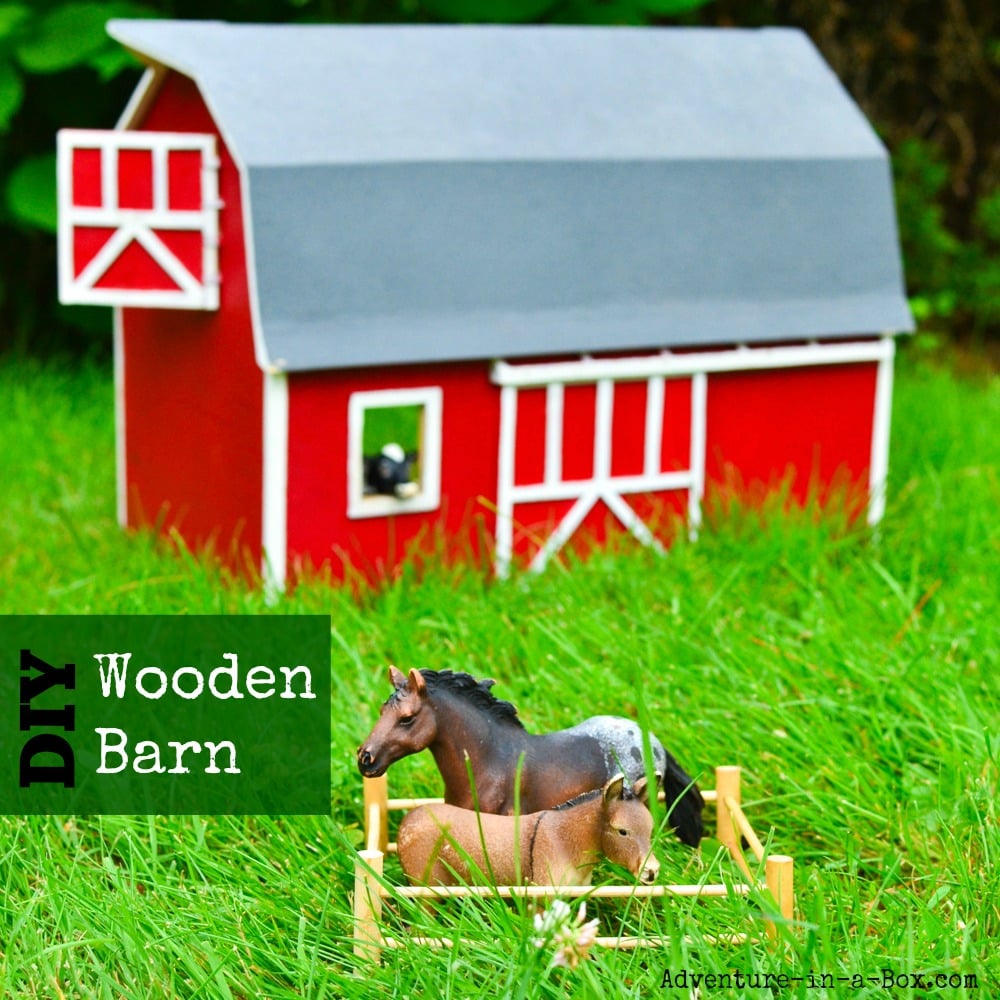 We made a few of these fences, as well as a ladder that leads into the loft. The ladder is made of two 1/4″ square dowels with nine holes drilled through them and 5/16″ round dowels glued in-between. 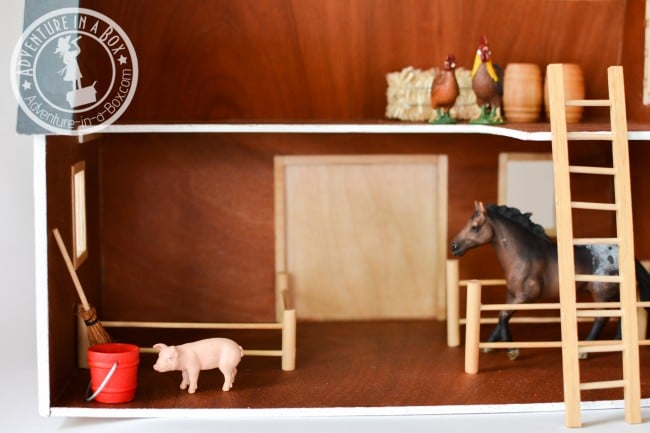 Now, for the actual construction of the barn. Since we made it a few months before the blog and weren’t in the habit of photographing our projects step by step, I could only salvage a few photos of its construction. So, I’ll try to describe what we did with the plan instead. 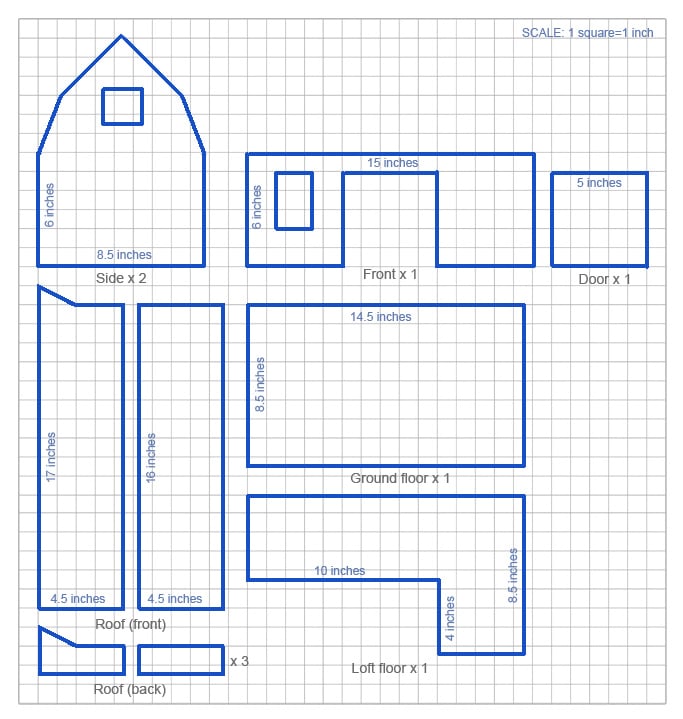 Building the barn wasn’t very time-consuming, and the main structure was constructed during one evening after our son was already asleep. We started by making the patterns and cutting them from card, to trace onto the wood. We never throw out a cereal box, because they are such a convenient source of just the right kind of card! Exact dimensions of the parts depend on the thickness of the wood you choose to use, but you can get an idea of the scale from our plan. We used 3/16″ plywood, and while we are happy with how it turned out and how sturdy it is, it was a bit tricky to drive nails into the edge of. 1/4″ might be better.

After tracing our templates onto plywood, we cut them out with a scrollsaw (any number of power or hand tools would do the same job). The pieces were then glued and nailed together with small box nails (pre-drill with a tiny bit is you encounter splitting). The bottom and the front wall went between the end walls. We then marked out the height we wanted our loft to sit, and glued some narrow strips of plywood (stir-sticks would also work) to the end walls to make a ledge for the loft floor to sit on. Once it sat were we wanted it, we glued and nailed it in. We marked lines on the outside wall to show where to nail – it is pretty easy to miss or split the end of narrow plywood, even when you take precautions against it. 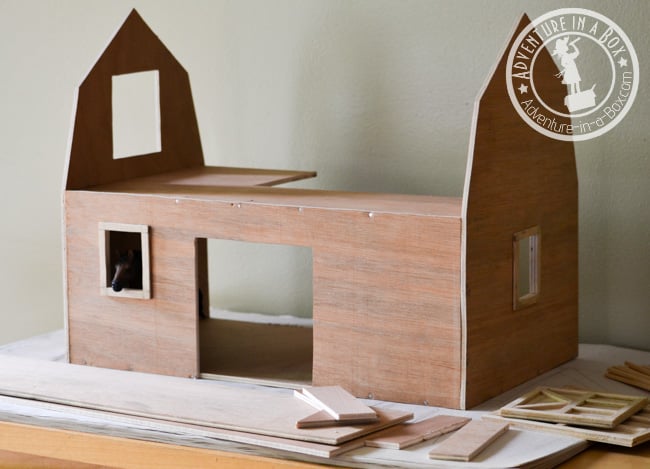 Putting the roof on was next. We cut the boards to size, but didn’t bother calculating the angles to eliminate the gap at the hip – it was an easy matter to just sand the angles and test fit until the gap disappeared. The angle at the ridge of the roof is 90 degrees, so no sanding it required – one side just overlaps the other. Additionally, a flare can be added to the lower margins of the roof – we just cut the appropriately angled section from a pine board, then cut lengths of it to glue to the roof.

Just in case you were wondering, the triangular peak over the hay loft of old barns is an extension of the roof to cover a track for a hay crane – a fascinating mechanism that used horse-power to lift loose hay up and into the loft. Our loft door has a hinge, which was far more complicated in execution that it needed to be. If we were to do it again, we would have just used a piece of cloth for a hinge, glued to the door and the wall, then further reinforced by gluing some trim over it. 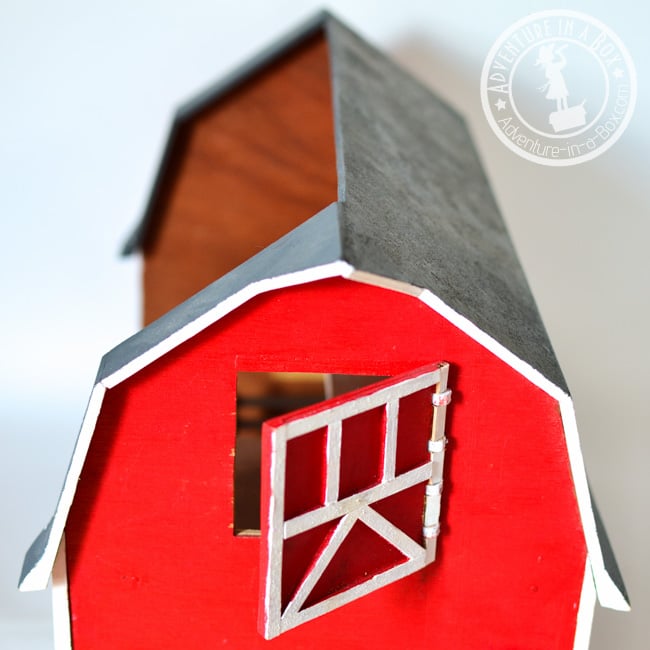 On the other hand, the sliding door on the front of the barn was well worth the effort. It wasn’t that hard to make, has stood up to lots of rough play, and seems to be the favourite feature of every kid who has tried it. The principle is simple – an “L” shaped trough secures a rectangular door at top and bottom, and has stops at both ends to prevent it from sliding out – the edge trim on the corner of the barn forming the outer stop. Make sure you take any trim and paint you plan to put on the door into account before making the sliding trough, and don’t finish assembling it until you have painted it. 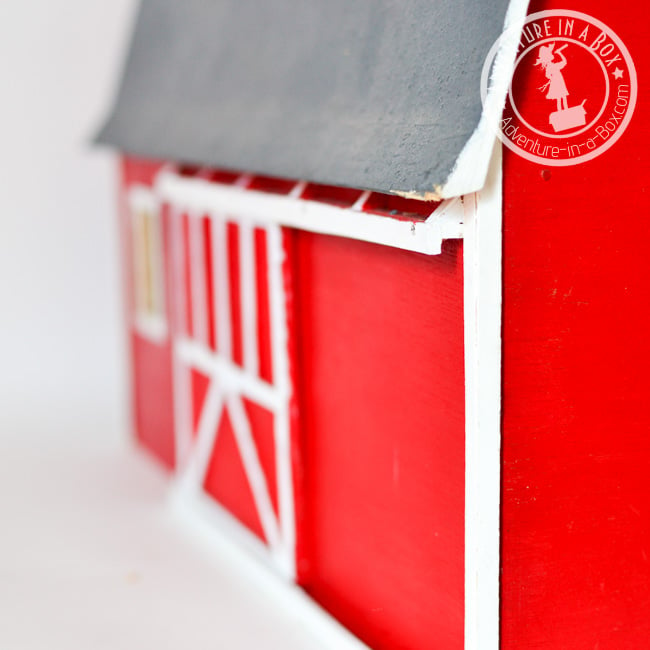 We found thin craft sticks to be incredibly useful for trimming for the barn. We cut them with a trim cutter and glued them on with white glue. We put trim on the outer corners of the walls, inside and outside the window openings, and on the window and door. Trim patterns of the barns varied regionally, and it was fun to take a look at some of the options before settling on one. 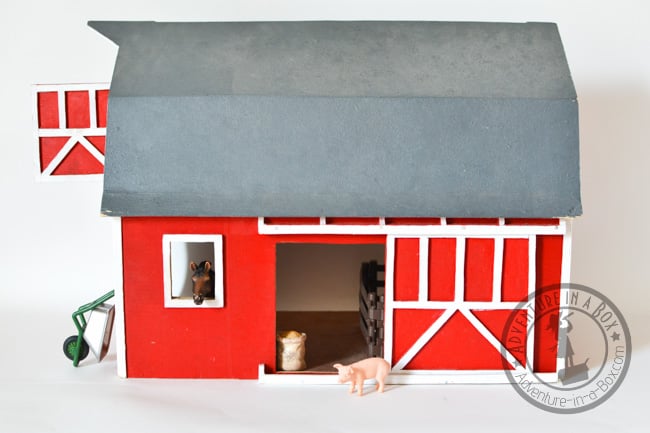 The last step was finishing. We oiled the inside of the barn and painted the outside with acrylic paints. Any indoor paint would do! First, we gave it two coats of red, then carefully highlighted the trim with white. We weren’t really satisfied with how the roof turned out after painting it with brushes, so we added some gel medium to the paint and sponged it on with a dishwashing sponge. Much better! For a rougher texture, try mixing some coarse cornmeal into your paint. If you are feeling even more ambitious, you could cut shingles out of layers of card, then glue them on and paint them. Ironically, even though there is nothing technically difficult about painting, this was the step that took us a week or so after the barn was structurally finished.

On the pictures above, taken two years later, you can see some scuffs in the paint; we also had to fix the hinge of the loft window once. But considering the rough treatment and love it got from a boy who was only one when he first got it, I think that it has held up remarkably well! Budster is still happy to play with it. Just as I’m finishing this post, an elephant stomped into the barn. I wonder how well he’ll get along with the other animals? 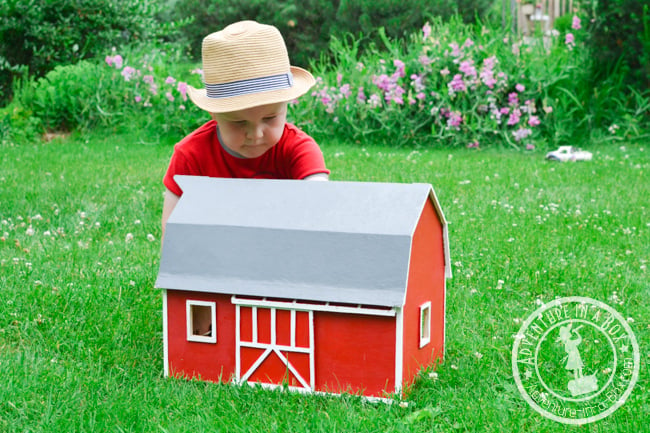