How to Make a Musketeer Costume for Halloween

We have a longstanding Halloween tradition – never get a decent photo of the costumes we make. That happened on Budster’s first year when he was a garden gnome. For his second year, we dressed him in a grand musketeer’s costume, but we only managed one smudgy photo!

It could have ended with that photo, but almost a year later Budster spotted a musketeer’s cloak in his wardrobe and wanted to try it on. He had outgrown three sizes of shoes and two sizes of clothes, but luckily, those shoe hero shoes still fit him. Miraculous! After looking through the photo shoot of my dashing musketeer (taken last year), it occurred to me to write a tutorial on how to make this costume, inspired by Dumas’ books and their many movie adaptations. 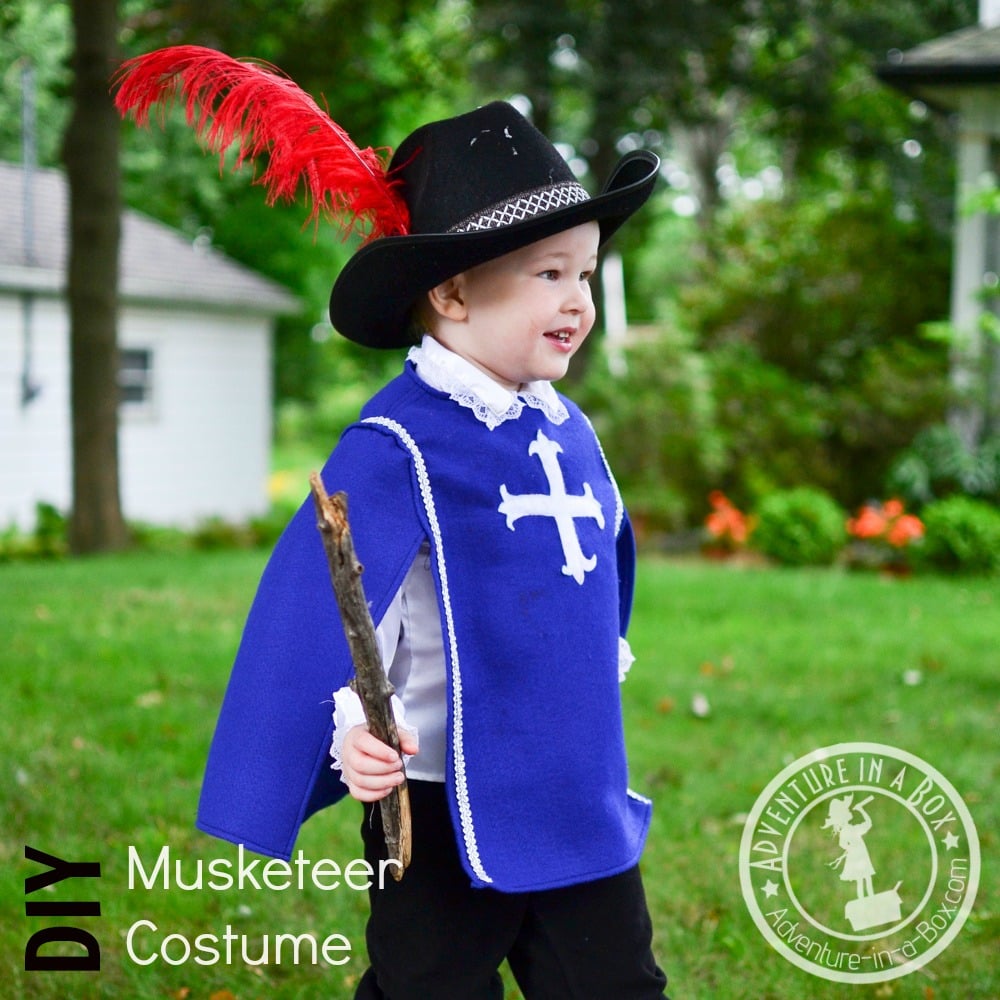 Our concept of a musketeer’s costume can be easily divided into two parts: what you can get in the thrift store and what you have to to make from scratch. The majority falls into the first category, and that’s the beauty of it. While the costume is homemade, I didn’t have to sew a musketeer’s shirt, for example.

No, I simply went into the thrift store and looked for a shirt about two sizes bigger than Budster wore at the time. The shirts in the 17th century tended to be longer with a loose fit and glorious, wide sleeves. I got lucky in the girl’s section and came home with a nice silky blouse.

The next step was to sew a row of frills onto the cuffs and the neck, and the blouse was ready. The hat came from the same thrift store. It was an old hat, but an ostrich feather did wonders, turning it into a jaunty musketeer’s hat. I think we got lucky with the boots. We went to the thrift store with the expectation of finding nothing better than a pair of black rubber boots, but instead we got a very cute and soft pair. They were made of thin artificial suede and seemed pretty impractical for real autumn weather, but they looked right and were very easy to modify.

Jeffrey sewed an inverted truncated cone of black felt onto the tops of the boots (seams out) as shown on the picture in the middle, then folded it down to give the look of a proper musketeer’s boot. We didn’t trouble ourselves much with pants: they were hardly visible, hidden under the long shirt and tall boots, covered with a cloak. But the cloak… The cloak probably took as long as the rest of the costume. It was only fair, it being the focus of the costume. In the book, D’Artagnan fought desperately to earn such a cloak, and our work had to be worthy of it as well.

To start with, we measured Budster. From there, we made patterns for the front/back and “sleeves;” provided here. Scale the patterns using the wearer’s shoulder measurement directly for the width of the front/back, and the measurement from shoulder to mid-thigh for length. The combined front and back halves of the neck opening also needs to be large enough for the wearer’s head to pass through.

We always keep empty boxes from cereal and frozen pizzas for making these impromptu patterns, taping them together where they aren’t large enough. The patterns get transferred to the cloth by tracing with a washable marker.

After cutting out the felt, sew the shoulders together. Then, hem about 3/8″ around the edges, including the neck opening. Hem all the edges on the sleeves except the top edge, which then gets sew to the rest of the cloak, centred on the shoulder seam. Try it on!

After you have ascertained that it is an acceptable fit, trim it with some braid. An emblem can also be cut from a contrasting colour of felt, to apply with stitching, fabric glue or an iron-on adhesive. We chose the iconic Maltese cross of the Musketeers, of course.

Not a bad fit even after a year in the closet, as you can see below. The boots were a bit tight, but it didn’t prevent him from strutting around and feeling daring. He grabbed a stick and headed into the yard to fight his invisible foes. …And to his surprise, he came across a real enemy. A mushroom! Since Daddy told him that they can sometimes be poisonous, Budster has made it his mission to rid the world of them. Which requires real daring on his part. Our son isn’t afraid of many things, but you can never know what to expect of a mushroom.

But inspired by his costume, Budster challenged the enemy and won! Vive le France!