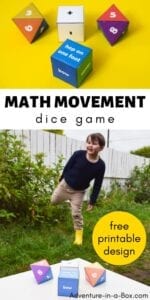 Math Movement Dice turn practising math into a game! Children can practise their addition and subtraction facts, work on their gross motor skills and have fun at the same time. With the free printable template, you can make the dice and play it too!

Children learn better while moving! This is the conclusion that recent research has pointed to. Not only do they learn better, but they enjoy the process, which is a definite win-win.

Recently, I read Brave Learner, by Julie Bogart. It is a great book about teaching in general and homeschooling in particular. First of all, it’s very relaxed and encouraging. Second, it’s just brimming with ideas for how to approach teaching and learning creatively.

One of the million ideas presented in the book was about how Julie taught her kids math facts while playing rockets. She would give them a task (count backwards, count by tens to a hundred, recite the months, etc.) to do while they are standing on a chair. When they get to the end, they would blast off the chair like rockets.

Both my son (6) and my daughter (3) loved that idea! We’ve played rockets for several days in a row.

So I started thinking more about math and movement. Could we add a die to make it more fun? We could roll a die and act out a certain movement as many times as the number on the die.

What if took two dice then! Possibly, add another one that has “+” or “-” on it. Then, before doing the movement, we need to solve a simple equation!

As you can see, in order for us to have all the numbers from 1 to 9, I made an eight-sided die template. There is one number that will stand for either “6” or “9”, depending on how the die falls.

It has definitely brought a revolution to our math lessons. They say that it is easy to achieve success in math if children just practice for about fifteen minutes every day or so. Now, in those fifteen minutes, we can practice math, have an active break, and just have fun.

Download our free templates for the game below and try it too!

There are three kinds of movement dice. Mostly, to create some variety. Also, even though they are all interchangeable, some movements are more suitable for the smaller totals you can expect from addition and subtraction, where the biggest you can get is 9+9. But if you include multiplication, then 9×9 will give you eighty one, and doing eighty one squats or eighty one hops on one leg is more of a chore then a fun task. So, there is a die that suggests movements that are more suitable for bigger numbers. Clapping eighty one times would still take time, but it is a fair bit more doable!

Maybe you don’t want to do multiplication? I’ve also made several dice that feature a different selection of mathematical operations: one that has addition, subtraction, and multiplication; one that has only addition and subtraction; and one that has addition only. Technically, you don’t need to make that last die since it just has “+” symbols on all sides. You can just agree to perform one operation at a time only, but having a “+” sign may be good for educational purposes.

There are also colourful and black-and-white versions of the dice, depending on your personal preference.

You can make the game with the free printable template. It’s very easy – print the templates, cut, fold and glue the dice together, using either a hot glue gun or white glue.

You can also put the game together if you have a variety of dice around the house. You can use D8 or D10 for numbers, and you can buy a movement die as well.

Engage in writing while using one of 70 creative writing prompts for kids that describe interesting techniques and offer captivating scenarios!

Go on a math-in-nature scavenger hunt!

Load More... Follow on Instagram
459 shares
All the digital products are 30% off with the code PRINTABLE2022! Valid until December 1.Shop