Puzzle Drawing Prompt for Kids with a Free Printable Template

Draw, cut and create a puzzle of your own! With this free printable puzzle template, kids can make as many as they want. 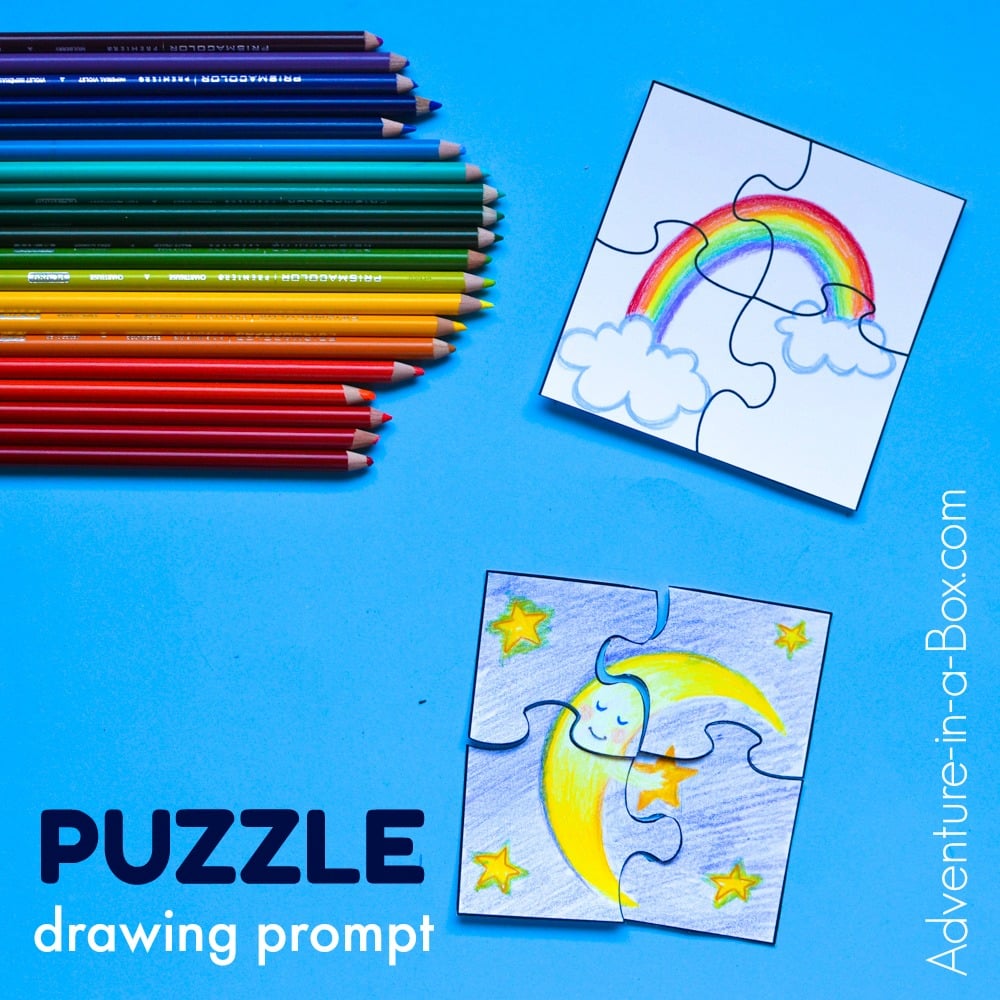 Draw, cut and create a puzzle of your own! With this free printable puzzle template, kids can make as many DIY puzzles as they want.

A couple of weeks ago, I found my son (4.5yo) sitting at the table and doodling something. Over the last year, he’s been devoted to drawing. He’s finally announced his career choice, which is a cartoon animator, so naturally he needs lots of practice. Anyway, the fact that he was drawing was not anything noteworthy, but it caught my attention that he was drawing on tiny pieces of paper. Obviously, some project was in progress, and I asked him what he was working on.

Then I saw that he was indeed trying to make jigsaw puzzles. What posed a complication was that he first cut a piece of paper into strips and then was trying to make drawings on individual pieces. A fairly complicated puzzle to put together! I suggested that he could try drawing the picture first and then cutting it into pieces, but my idea didn’t gain popularity, so I let the creator carry on with his project the way he enjoyed.

But that gave me an idea to prepare a simple puzzle template for him to finish some other day.

There are commercially available blank puzzles. I always thought that they were fun to personalize and even made a little puzzle for a friend once. But if I want my son to enjoy it, I know that he needs an opportunity to create many versions. Without being stopped. Or admonished for leaving just one squiggle over the whole sheet. So I drew a puzzle template for him and printed ten copies to start with! 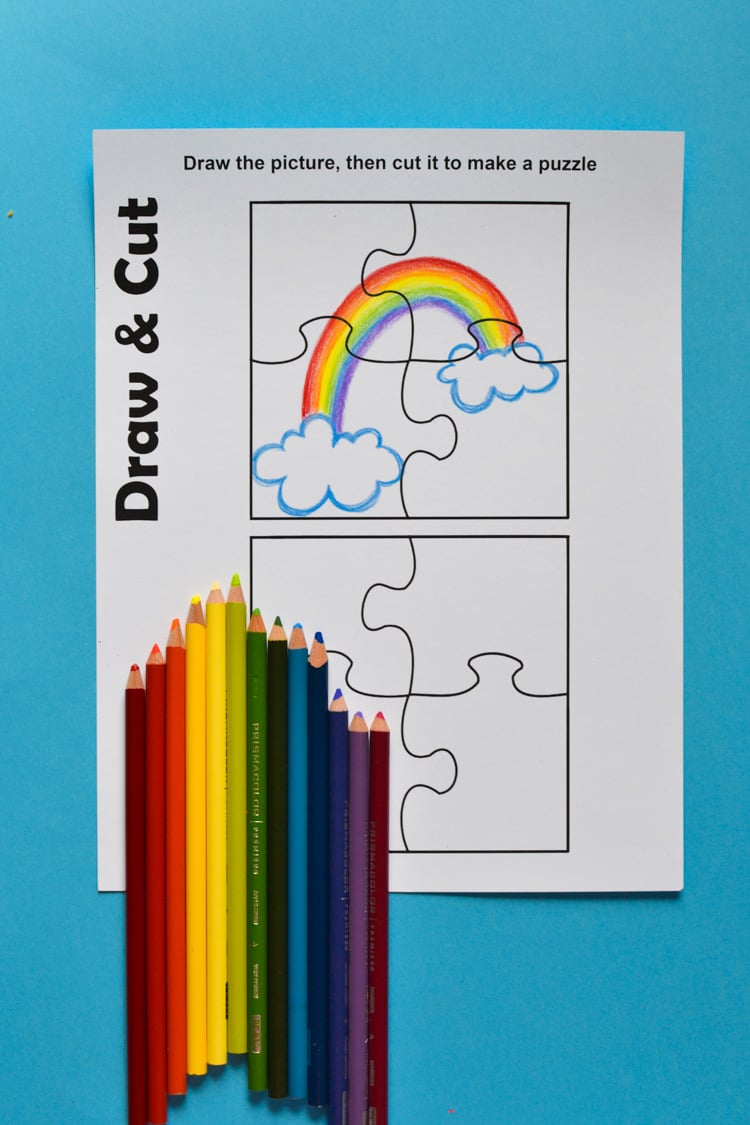 Lots of puzzles Anselm created at first indeed got only a couple of squiggles on. The others got individual pictures on each puzzle tile. I took the opportunity to sit down and draw puzzles too. Mostly because I felt childish excitement over trying my hand at making puzzles as well, especially since I knew that my son will like putting them together. 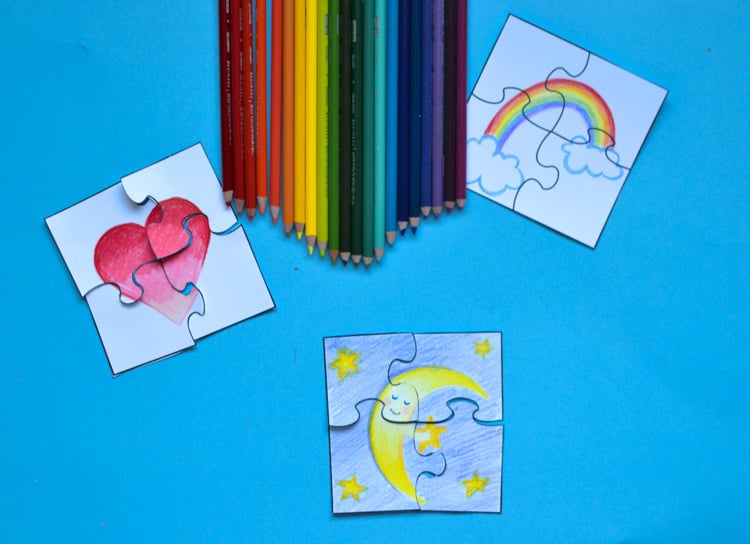 That made Anselm notice the way I was positioning the picture over all the tiles, and he tried that too. He made a sun and a couple of comets. 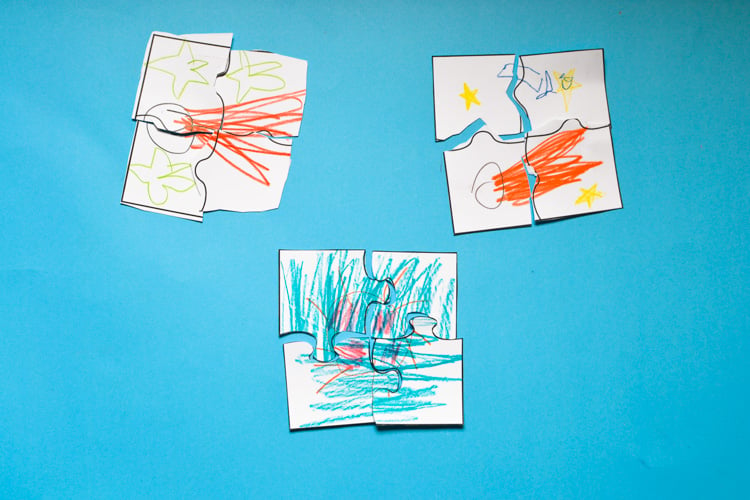 The next step was, naturally, cutting the pieces out. I thought it would be a great scissor practice – and some fun for Anselm who can never find enough things to cut. At this point, I realized that I made the pattern a little too complicated, so I adjusted it – as a result, you will see that there is a version for more advanced scissor users and there is a version for beginners. The latter doesn’t have tricky curves, but it’s still plenty challenging for a preschooler, especially a left-handed one like our son. 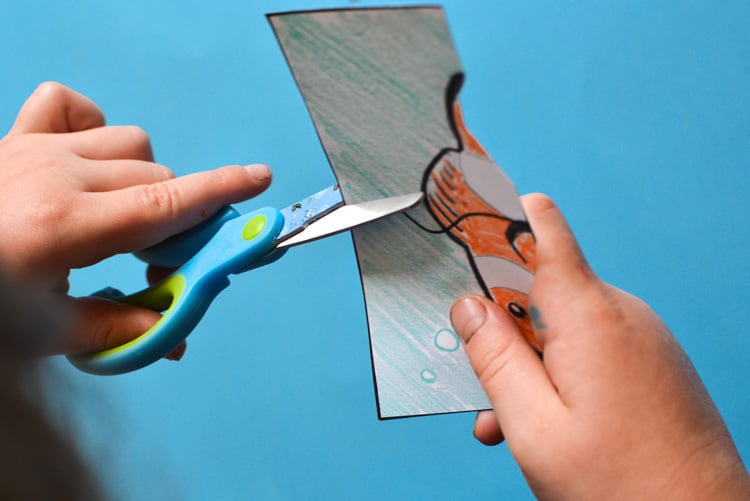 Once the puzzles are cut comes the last step of actually trying them out. It’s very satisfying to try their creation at work – or, as the case may be, make parents or siblings test it! Not very difficult with a four piece puzzle, but it still makes you pause and think for a few seconds. I noticed it even when I tried my own puzzles. And if you try to make things a little more difficult, there is a puzzle prompt in the printable pack that consists of six pieces!

Enter your email address to get your printable!

We promise to keep your email address safe and protected from SPAM. By entering it here, you agree to receive our free weekly newsletter.