Make the very hungry caterpillar from polymer clay! It’s a suitable craft for older kids and adults who would like to get a feel of polymer clay. 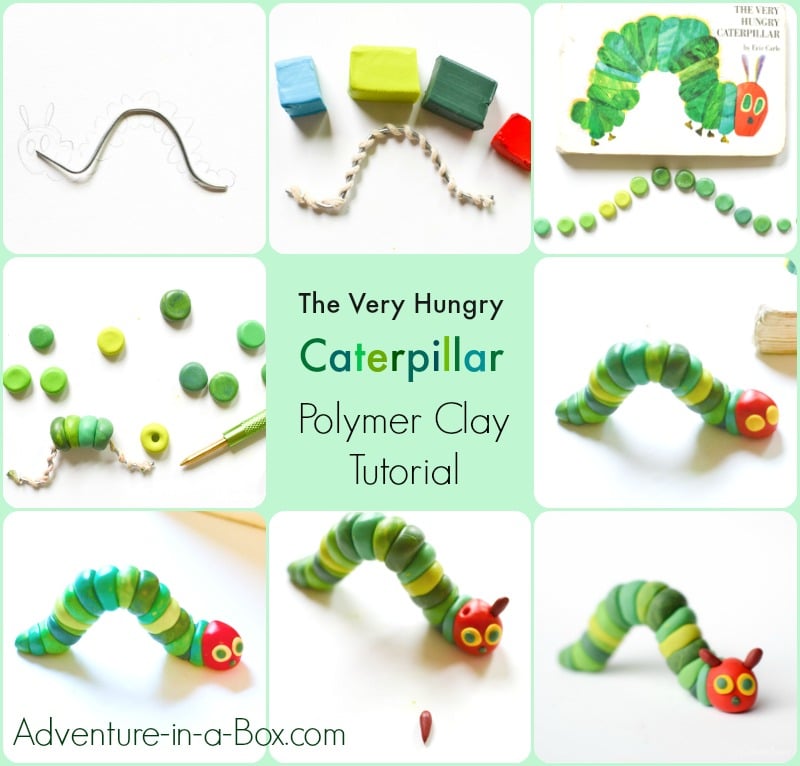 … Like other children over the last forty five years, my son made the caterpillar his special friend. In the darkness, as his eyelids are closing, I tell him in a whisper about “a little egg that lay on a leaf in the light of the moon”. He curls next to me and listens to the tale of a magical transformation. Just imagine his excitement when one morning he found a little caterpillar waiting for him to play!

It is very easy to make your own very hungry caterpillar with polymer clay. Polymer clay is an amazing material for crafts: it is very similar to Plasticine during the sculpting process, however if you bake the finished projects, they harden and can be played with, given away as gifts, or simply preserved as keepsakes. Polymer clay is certified non-toxic, so it is safe to let children work with it too, as long as they do not start eating it.

If you are not certain about investing in polymer clay, have fun making a Plasticine craft with children – and omit all the parts that are related to baking.

A small note on choosing your polymer clay: Premo and Fimo are generally considered to be the best. Fimo is more difficult to knead, but somewhat better suited for small details, and Premo stays hardest after baking. The difference between them is negligible for a project like this, but Premo is made in the USA and therefore easier to buy in North America, while Fimo comes from Germany and is more popular in Europe. 1. Cut a piece of wire about 3” long. That will be an armature for the caterpillar to make the finished piece strong. Bend it in an “S”-shape, like a crawling caterpillar.
2. Wrap cotton thread around the wire. It will help the clay to stick to the wire. Glue the thread to the wire with an instant glue in several places, but, most importantly, in the beginning and in the end.
3. Wash your hands before working with polymer clay to keep it oil- and dust-free. With a knife (a hobby knife is preferable, but any knife you will not use for cooking should work), cut pieces off the polymer clay squares. Put the leftover polymer clay in a sealed container or bag. You will be able to store it like this for months.
4. Start kneading the pieces you cut. Like plasticine, polymer clay starts somewhat hard, but within seconds gets softer as you knead it. Mix two or three colours together to create different shades of green for the caterpillar’s body. Blue + light green, blue + dark green, light green + dark green – in different proportions. If you stop short of thoroughly mixing the colours, they will have a marbled texture reminiscent of Eric Carle’s painting.
5. Using your different shades of green, make little discs by rolling balls and squishing them down. Most of them should be the same size (~1/2” inch), but make a couple smaller ones for the tail. Also roll a red ball for the head.
6. Put your discs onto the wire randomly. In order to help them slide onto the wire smoothly, you may want to poke a hole inside of each one. I used a sculpting tool, but if it was not handy, I would get a little screwdriver or a thin bamboo skewer. Each of the new discs should be gently pressed to the previous one, so that there would be no space between them. They will bond together in the heat of the oven. 7. Now, the caterpillar’s body is ready. Roll two little yellow balls, then press them to the caterpillar’s face.
8. Roll three tiny dark green balls. Press two of them to the eyes to make caterpillar’s pupils. The third ball will make a nose.
9. For the horns mix red with blue, then roll two little sausages with one end thinner than the other Poke two holes in the caterpillar’s head and insert the little horns in them, thin end down.
10. The caterpillar is ready for baking! Put it on a piece of aluminum foil or parchment paper and stick it in the oven. Read the instruction for your type of polymer clay on its package. Premo is supposed to be baked at 130 degrees for 30 minutes per 1/4 inch thickness. Our caterpillar turned out to be about 1/2 inch thick, so I baked it for an hour.
11. Once the time is off, take the piece out of the oven and let it cool down. While it is hot, it is still fragile. Budster was very excited to see the caterpillar. I felt happy too, thinking how in the past I would have found the appearance of a favourite book character to be splendid and miraculous. I was a bookish child, and as far as I remember, always dreamt of playing with my favourite characters. Adults laughed kindly, as I made calls on my toy phone to Winnie-the-Pooh, had long serious conversations and told them later that they could not hear him because… well, obviously, because he had a sore throat.

Tomorrow, Budster, the very hungry caterpillar and I are going to explore our pantry in search of one apple, two pears, three plums… and so on. I will keep you updated on what we will find!