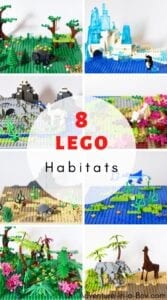 Complete animal habitat projects with LEGO bricks. With our printable pack, you can study eight principle biomes, design them and play with them!

From a cute arctic fox prowling the Arctic tundra to a mighty elephant lumbering over the African savanna, this pack showcases some of the world’s most interesting animals and describes how they adapt to their surroundings. What makes it possible for a penguin to survive in the cold of a polar desert? How does an ostrich fare in the desert?

We decided to explore it with LEGO bricks! We built various biomes, then populated them with animals. All the animals are built in a roughly the same scale, based around LEGO figurines. This way, LEGO guys can go on an African safari trip or ride a guanaco in the mountains of South America.

For a start, let’s discuss the difference between biomes and habitats. Biome is a more general term, that means a combination of plants and animals that have common characteristics for their environment. There are several classifications of biomes – some include eight, while others name thirty biomes!

The word “habitat” is often used interchangeably with the word “biome”, but there is some difference.  While a biome describes the world’s major communities of living things, a habitat describes the specific neighborhood where a plant or an animal is found.

So, in this post, we really are exploring biomes. But since habitat is a more familiar term in elementary education, I’m using it as well.

The eight biomes that we built include…

…grasslands (dry, but not as dry as a desert; abundance of grasses, but very few trees)…

We have also created a special pack to go along with this activity. It outlines the distinguishing features of each biome. What plants grow there? What animals inhabit it? It has an illustration of our LEGO model, as well as a photograph of a real landscape.

The pack also includes colour-coded pages that have detailed descriptions of animals, in particular, how they adapt to life in different habitats. Those pages also include the LEGO models, as well as animal photographs for reference.

But, if looking at those models isn’t enough (and, in most cases, it isn’t), the LEGO Habitat pack also includes twenty booklets with clear step-by-step instructions and the part list.

There are a variety of LEGO designs in the pack. Some are more complicated, but also more poseable, like the elephant with an articulated trunk, jointed legs, neck, jaw, etc. Others are simpler, like the muskox or the raven. We have also tried to use parts that are commonly available with modern sets, but every LEGO builder’s collection is different, so don’t hesitate to substitute.

Start by choosing a biome. Read about it, look at photos of the landscape and animals included. Possibly, find more photos of animals and plants. Discuss the most prominent features of the biome. Here are some questions you can ask:

Different kinds of vegetation were very handy – flowers, trees, seaweed. Our LEGO collection includes some bricks from the 90s, and it’s very interesting to see how they evolved! It is particular apparent in our LEGO model of tropical forests, where we threw together all of our vegetation.

After building a habitat, you can use our step-by-step instructions for building animals to inhabit it!

Many animals that live on Earth right now are considered endangered. Learn about the threats to their existence, as well as efforts being made to protect them, with this twist on a classic Guess Who board game.