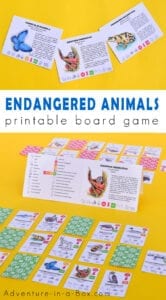 Our Endangered Animals game introduces kids to the topic of endangered species, threats to their survival, and efforts being made to protect them.

Many animals that live on Earth right now are considered endangered. There are currently more than 31,000 species on the red list! That means that, without additional intervention and protection, they will soon join the ranks of the mammoths and become extinct.

The tragic fact is, that fate is not confined to some little known species – 41% of amphibians, 33% of coral reefs, and 25% of mammals are on the list. That includes orangutans, gorillas, tigers, pandas, rhinoceroses, elephants, pangolins, and many more.

We created our Endangered Animals Game to encourage children to get to know these animals and to raise awareness of the various threats they face.

The board game is based on the principles of STEM and integrates science (biology) and math (logical thinking and deductive reasoning), presenting information in a succinct and engaging way through icons.

We hope that it will encourage children to take further interest in learning about nature and conservation!

How to Play the Endangered Animals Game

In the beginning of the game, players get an endangered animal card that they keep secret from each other. Players then attempt to deduce the identity of their opponent’s animal, by asking questions and comparing the answers to their key of twenty animals.

But don’t ask about the appearance of the animals—focus instead on their prominent attributes, what threatens them, and their conservation status. All of that information is expressed through easy-to-understand icons on the cards.

But there is still quite a bit of play ahead. In order to win, the player needs to guess three animals correctly to win! Every time a correct guess is made, read the information card together. It’s filled with interesting facts, both about the animal and about the threats it faces.

For instance, by following the symbols, you can see that the Panamanian golden frog is an amphibian that lives in forests and eats other animals. It can produce a lot of offspring, up to 900 eggs at a time. That doesn’t help it however, since its native forests have been suffering from a fungal infection and pollution. All the attempts to reintroduce the frog into its native habitat have been unsuccessful this far, so it’s considered critically endangered. In fact, there may be none left in the wild.

There are also supplementary rules to the Endangered Animals game that players can try, once they have acquainted themselves with the basic version. Some bonus rules suggest using two cards at once, and others prompt one player to consistently lie, in order to make the game more complicated.

Want to play in a group? There are separate rules for that. And if you plan to use the game in a big group or in a classroom, you may consider getting the extended edition with 11 x 8.5″ posters!

· twenty information cards, each featuring a painting of an animal, its common name, its Latin binomen, a few interesting facts about it, how it is threatened, and conservation efforts to protect it from extinction.

· forty double-sided elimination cards, each with an illustration of an animal, its common and Latin names, with icons depicting important species and survival facts

· rules for a two-player game, rules for a small group, and bonus rules; classroom rules and 11 x 8.5″ posters are included in the extended version only

· templates for making your own cards and posters that will be useful for adding new cards to the game or, if you are using it in a classroom setting, for encouraging further research from students

Get the Endangered Animals Game Here!

Here is the basic version of the Endangered Animals game ($5) for two players and small groups, and here is the extended version ($7) that adds the possibility to play in large groups and classrooms.

Animal tracks game will teach players how to match animals with their tracks and where to find them!

Using this nature-inspired engineering game for kids, players will learn about ten animals and the houses they build, then complete the engineering challenges and build their own versions of these amazing dwellings!