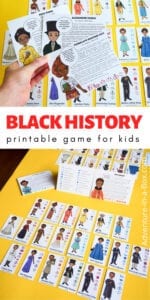 Using this Black history game, kids will learn about twenty inspiring people who changed the world and celebrate their achievements. Including Martin Luther King Jr., Rosa Parks, Maya Angelou, Jesse Owen, Mae Jemison, and many more. Looking to celebrate Black History Month with kids? This is a great start!

We all know about the significance of the first man on the moon. It took the efforts of many people to get him there, and among them was Katherine Johnson. Over the course of her 35-year career as an aerospace technologist, she was responsible for calculating flight trajectories for many historical missions. Yet when she first came to work with the space agency, she was not allowed to eat or work in the same room as her white co-workers.

Jesse Owens won four gold medals at the 1936 Olympic games in Berlin, single-handedly undermining Hitler’s vision of showing off German superiority. Back at home in Depression-era America, he was just a Black man struggling to make a living, and soon he was reduced to opening a laundry business and racing at fairs.

Madam C.J. Walker was the first child in her family born into freedom in 1869. Tragically, she lost her parents when she was only seven and had to start working as a servant. In thirty years though, she opened a hair product business, and it became so successful that Madam C.J. Walker is known as the first woman in America to become a self-made millionaire! She employed over 20,000 women, and she didn’t only train them in sales but taught them how to build their own businesses, maintain their budgets, and gain financial independence. At the end of her life, she willed a big part of her estate to charity.

Black history is full of amazing stories about inspiring people, their achievements and their struggles. We’d like to share them with children, and that’s why we created Black History: Guess Who. It is a game of deduction, similar to a classic Guess Who game, but instead of focusing on appearance, the players focus on achievements. While engaging and entertaining, it makes Black history relatable for kids and brings to light many accomplishments and trials.

This Black History game was made:

How to Play the Black History Game

The basic Black History game is a two-player version, where each player gets their own set of cards and one biography card of the mystery person that their opponent needs to guess.

In the example above, the blue player asks, “Is your character a woman?” The red player whose mystery person is Mae Jemison says, “Yes.” Then the blue player flips over all the cards of men. The blue player has just eliminated ten cards. It’s actually a pretty good first question.

Like this, the game continues until one of the players can name the opponent’s mystery person! If the guess is right, the other player picks a new card and a new mystery person. The first person to make three correct guesses wins the game.

While the character cards are pretty small, the biography cards have a lot more information, so it is fun to take a closer look at them, once the right guess has been made. There is a name, a place of birth, dates of life, major accomplishments, a short timeline of important events, and a quotation.

So, that was the game for two players. But what if you want to play in a classroom or just in a bigger group? It is an educational game, after all!

There are two editions of the game – the basic one includes the two-player-game variant and the extended one has the two-player-game plus alternative rules for playing in a bigger group. In addition to that, it also features twenty posters. You can arrange them on a whiteboard or on a table for everyone to see.

We hope you will enjoy the Black History game!

Get the Black History Game!

If you are interested in exploring Black history for kids more, take a look at our bundle of Black History month activities. It includes this game, paper dolls of inspiring Black people, and colouring pages.

If you want more cards for playing the game, consider pairing the Black History game with the Amazing Women Guess Who Game!