Famous Women in History: Guess Who Game for Kids 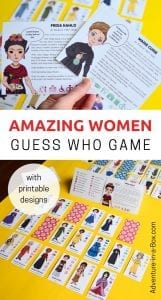 Using this educational game, dedicated to famous women in history for kids, you will learn about twenty amazing heroines who changed the world. Includes Marie Curie, Frida Kahlo, Florence Nightingale, Rosa Parks, and many more!

Do you know who wrote the first novel? Murasaki Shikibu, a lady-in-waiting who lived in Japan between the 10th and 11th centuries, is considered to be the world’s first novelist.

Do you know the only person who got a Nobel Prize in two separate sciences? That was Marie Curie, who received a Nobel Prize in physics and, later, in chemistry. She did that, while working for the University of Paris, after the university in her native Poland rejected her application, on the grounds that she was, you see, a woman.

Have you ever heard of the person who identified 350,000 stars? Annie Jump Cannon did that – and changed the classification at the same time! She was also an avid photographer, who had gone mostly deaf in her youth.

History is full of amazing stories about women – as well as about their struggles to get accepted, because they were, just like Marie Curie, well… women. Women: Guess Who is a game, dedicated to them and their extraordinary achievements.

The women featured in the game are scientists, explorers, artists, activists, and more. They come from different social classes and from different parts of the world. What unites them here is that each of them did something extraordinary—and they worked hard to get there.

Want to have a short overview of the famous women that are featured in the bundle? Check this free printable poster, featuring famous women in history and their inspiring quotes!

Also try our other Guess Who Games – Endangered Animals, Birds, and Christmas Characters Around the World!

Famous Women in History Guess Who Game Was Made:

Would you like to add more cards to the game? The cards of the Black History Guess Who game integrate seamlessly with the Women Guess Who game!

How to Play the Guess Who Game

The basic version is a two-player game, where each player gets his/her own set of cards and one biography card of the mystery woman that his/her opponent needs to guess.

While the character cards are pretty small, the biography cards have a lot more information, so it is fun to take a closer look at them, once the right guess is made. There is a a name, a place of birth, dates of life, major accomplishments, a short timeline of important events, and a little quotation.

So, this is the game for two players. But what if you want to play in a classroom or just in a bigger group? It is an educational game, after all!

There are two editions of the game – the basic one includes the two-player-game variant and the extended one has the the two-player-game plus alternative rules for playing in a bigger group . In addition to that, it also features twenty posters with famous women in history. You could arrange them on a white board or on a table for everyone to see.

We hope you will enjoy this game!

Get Women Guess Who Game!

If you like learning about the famous women, use the full Famous Women in History for Kids Bundle to study the topic of women who changed the world. Inspire children with stories of brave explorers, dedicated scientists and passionate activists. Discover some amazing firsts from history alongside the struggles that pioneers in all fields had to face. Finally, encourage them to learn more and find their own inspiring examples!