What Bird Am I: Game 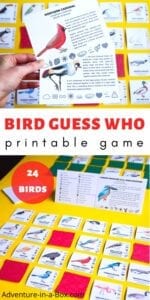 What Bird Am I? is a printable game of bird deduction, where players are attempting to deduce the identity of their opponent’s bird, by asking questions and using a key of twenty four birds.

Birds are a very diverse and fascinating group!

They come in all colours – black grackles, white snowy owls, and colourful birds-of-paradise. They also come in a variety of sizes – compare the smallest bee hummingbird (5.7 cm or 2 1/4″ long) with the largest ostrich (210 cm or 6’10”)!

Some birds, such as mallard ducks, can swim, but many others cannot. On the other hand, many of them can fly, but not all of them. Penguins or kiwi birds do not have the ability to become airborne.

There are also plenty of animal records in their group! Peregrine falcons are recognized as the fastest animal; ostriches lay the biggest eggs; and corvids are among the smartest animals – they use tools and have complicated social rituals.

What Bird Am I? game encourages players to learn about the diversity of the bird world! It is based on the principles of STEM and integrates science (biology, or more specifically, ornithology) and math (logical thinking and deductive reasoning). It also encourages players to take further interest in learning about nature.

We hope you will enjoy the game!

How to Play What Bird Am I? Game

In this game of bird deduction, each player gets a bird card. By asking questions and using the key of twenty four birds, the players are attempting to deduce the mystery bird of their opponents. But don’t just ask about the appearance of the birds—focus instead on their prominent attributes, which are expressed through icons on each card.

The players continue to take turns and asking questions until one of them is ready to name the mystery bird of the other.

Each information card is packed full of fun facts, so it is interesting to read them out loud, once the right guess is made. Each card features a watercolour illustration of a bird, its common name, its Latin binomen, where it can be found, a few interesting facts about it, and, of course, all of its prominent attributes, expressed with icons that you can see at the bottom of the card.

All the small playing cards have the attribute icons as well, and they are what players are encouraged to use, in order to guess the bird of the opponent.

Each player has a legend that explains every symbol in front of them, so it should be easy to form questions! And even if one of the players isn’t a very good reader yet, which is the case for my son, he can guess most of the symbols and memorize the rest very quickly.

What Bird Am I? Game Features

Get the Game Here!

Here is the basic version of the game for two players and small groups, and here is the extended version that adds the possibility to play in large groups and classrooms.

This bird bingo printable game features 48 species of birds from around the world. With beautiful watercolour illustrations and multiple levels of complexity, it will bring joy to bird enthusiasts of all ages!