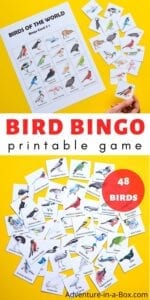 This bird bingo printable game features 48 species of birds from around the world. With beautiful watercolour illustrations and multiple levels of complexity, it will bring joy to bird enthusiasts of all ages!

Spot all kinds of birds—from a sparrow to a bald eagle and from a peafowl to a kiwi bird—mark them off on your card and “bingo!”.

But I bet you know – or, at least, can guess very well – how to play bingo already. It’s simple and quick, so players of various ages can equally enjoy it. Bingo games are good for developing fast reactions, memorizing pictures and words, and for all the social aspects that can be learned while playing any board game (following rules, taking turns, winning and losing gracefully).

And what if players can learn something else while playing it? Well, that is a great bonus! (In the past, we made Flag bingo, Famous Women in History bingo, and Recycling bingo for our kids.)

In the bird bingo printable game, players learn to identify birds! There are thirty two bingo cards that will help educators balance out the complexity and modify the focus of the lesson.

As for the birds? There are forty eight bird species and sixty four unique bird pictures, included in the game!

Bird Bingo features a variety of bingo cards–and birds–that will help you tailor the game to your specific lesson.

There are several bingo cards that feature birds from all over the world, and they introduce the idea of bird diversity to the players. Most of us know a few birds that we regularly see. In our area, we see many sparrows and pigeons, some ducks and geese. There will be some of those in this part of the game, but also – kakapo, the flightless parrot owl of New Zealand, or grey crowned crane, the dancers of Africa. By the way, if you want to learn more about those two, check our Bird Guess Who game that introduces players to the habits and behaviours of various birds from around the world.

Did you know that some male and female birds of the same species look different, especially during the mating and breeding seasons? On those cards intended to showcase the variety of birds in a region, species are depicted by a male in his brightest plumage, but the last set of bingo cards focusses on the differences within a species and showcases the difference between males and females. This bingo game works well as an extension of the match male and female bird activity.

The Bird Bingo printable game contains 32 bingo cards. As you will see, when looking through the game, there are three distinct types of cards—type 1 features both the picture of the bird and its name, type 2 features only the pictures, and type 3 features only the name. Any of them can be used either as bingo cards (by printing one per player) or as tokens (by cutting the card).

You can choose whichever combination of cards suits your needs and thus modify the level of game complexity.

For beginners, use the bingo cards with pictures and names AND also cut the same bingo cards to use as tokens. This way, the players will have both the picture and the text to rely on, when deciding whether a bird token belongs on their card or not.

For advanced players, use the bingo cards with text only AND cut the cards with pictures only to use as tokens. The players will have no help to match the picture of the bird with its name, but have to rely on their previous knowledge.

Of course, all kinds of in-between variants are possible as well! Depending on the previous knowledge and reading level of the players, choose whichever suits you best. In the case of an age or experience difference between the players, you can give them different cards as well.

Besides that, you can use the cards for setting up a sorting activity or a memory game.

These six nature art prompts encourage artists of all ages to finish the ink drawings of birds with natural materials.