Play this printable bird identification game by matching male and female birds and making bird pairs! This game would be a great gift for bird enthusiasts of all ages, introducing children to the concept of bird spotting and identification. After playing this bird game, they will not only learn to spot a cardinal, but also identify its gender. 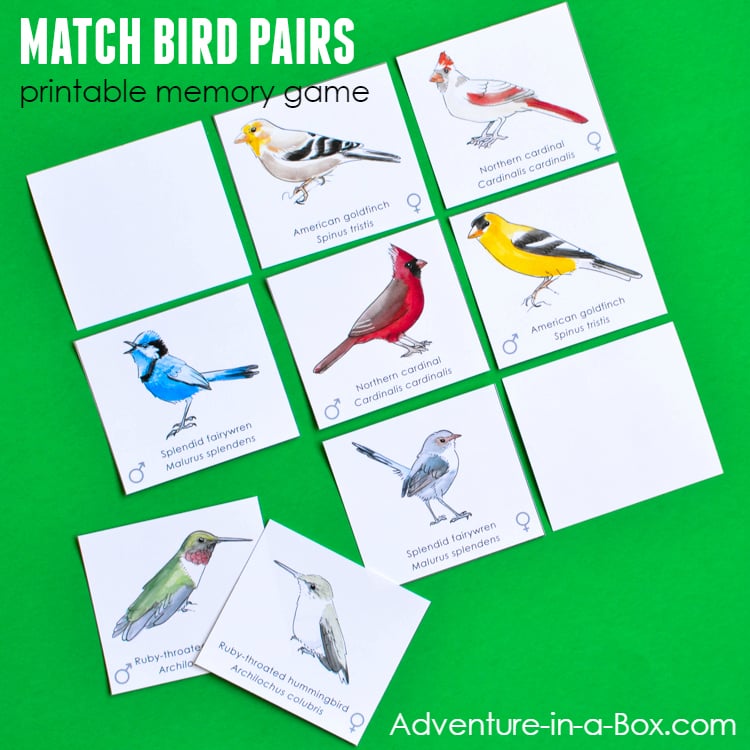 It’s rather embarrassing to admit now, but when I was a young girl living in a busy city, I thought that the male and female mallards in the park were separate species of ducks. Later, however, I discovered the joys of bird watching and wanted to make sure that I gave my own kids a head start on that. After all, it is easy to identify common birds in the area, either by carrying a bird guide, checking the internet whenever a new birds comes to the feeder, or by playing a game.

We’ve made just such a game. In a playful and engaging manner, it introduces the subject of bird spotting and identification, taking in consideration how different the birds of one species can look, depending on their gender and the time of the year. I think that many nature lovers will recognize the feeling of satisfaction on seeing a bird and knowing its name without checking the guide. There is only one thing better than that: it is having your kid call the bird’s name before you do!

Colouration is one of the most noticeable things about birds, and the most useful in their identification. But males and females don’t always look the same, and males are often more colourful than the females. It turns out that there is a good reason for that – males need to impress females who are selecting a mate, and females need to remain inconspicuous while incubating eggs and tending young. Here are a few bird pairs from our game, showing just how different male and female birds can look. 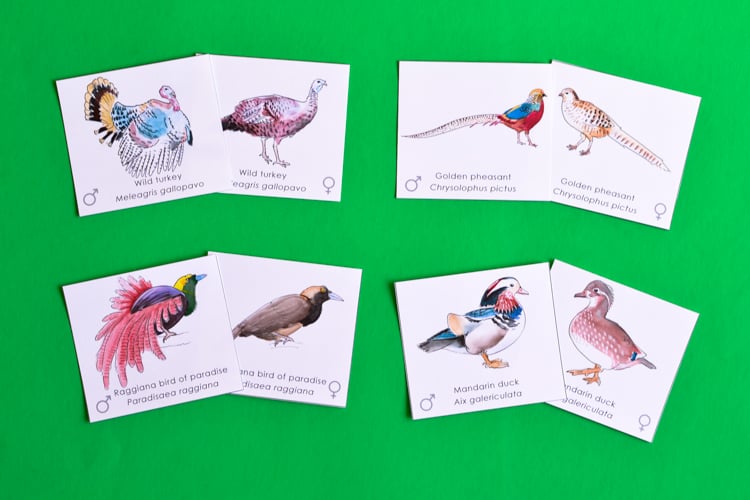 Interestingly, long-term monogamy and equal parental care tend to make males and females look more alike. And in some cases, females are more colourful than males because of exchanged roles. But even males that have bright breeding plumage don’t always wear it year round – many look similar to females for much of the year! Here are some birds where the males and females never look much different.

We hope you’ll enjoy the game!

Also check: What Bird Am I? game of mystery and deduction and Bird Bingo, featuring 48 birds and 32 bingo cards!

Our game features 42 printable bird cards – 21 male and 21 female, with interesting species selected from around the world. Each card features a painting of a male or female bird, as well as its common name, international scientific binomen, and gender symbol. 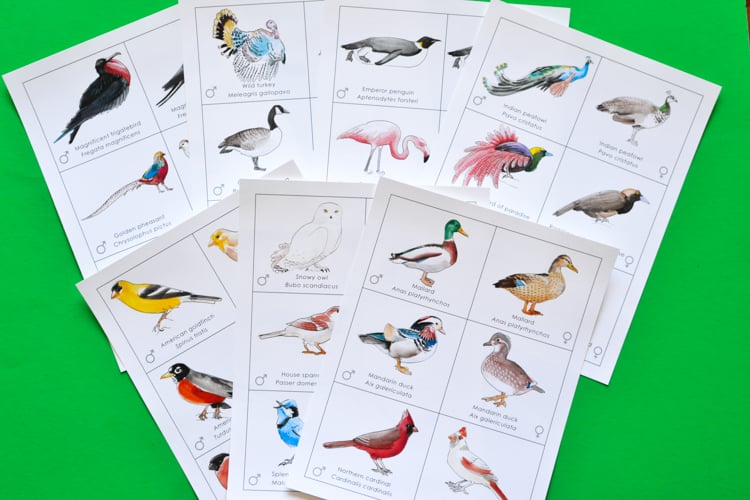 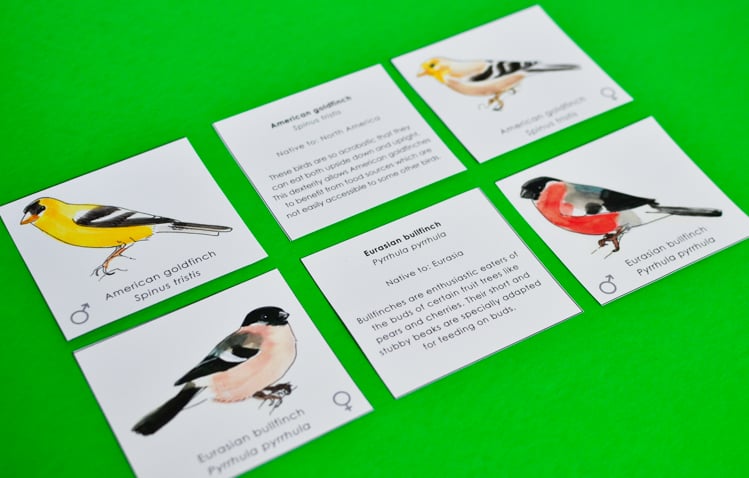 Take a look at the video of the game!

To learn which males and females go together, the cards can be mixed together, face up. Then pairs can be made by sorting through them. Children who cannot read yet may need some help, but they will soon learn to recognize them by name and gender. Hurrah for fun education! 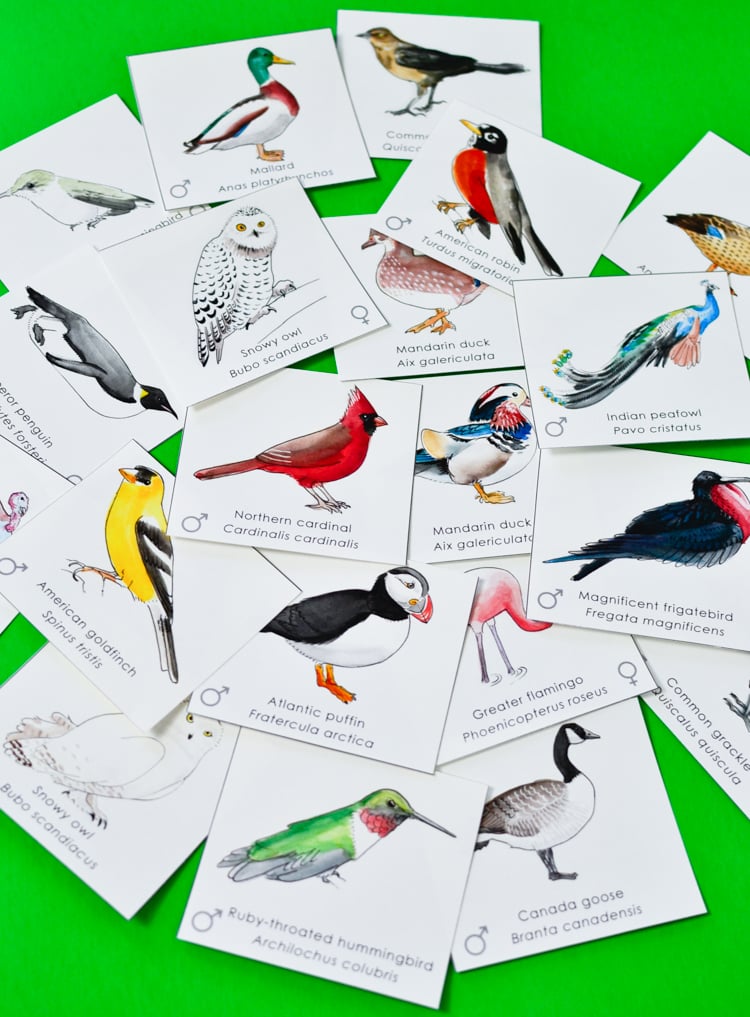 Once familiar with the bird pairs, players can play a memory matching game!

Depending on the number of players and their ages, you can either use a small set (6 or 8 pairs)… 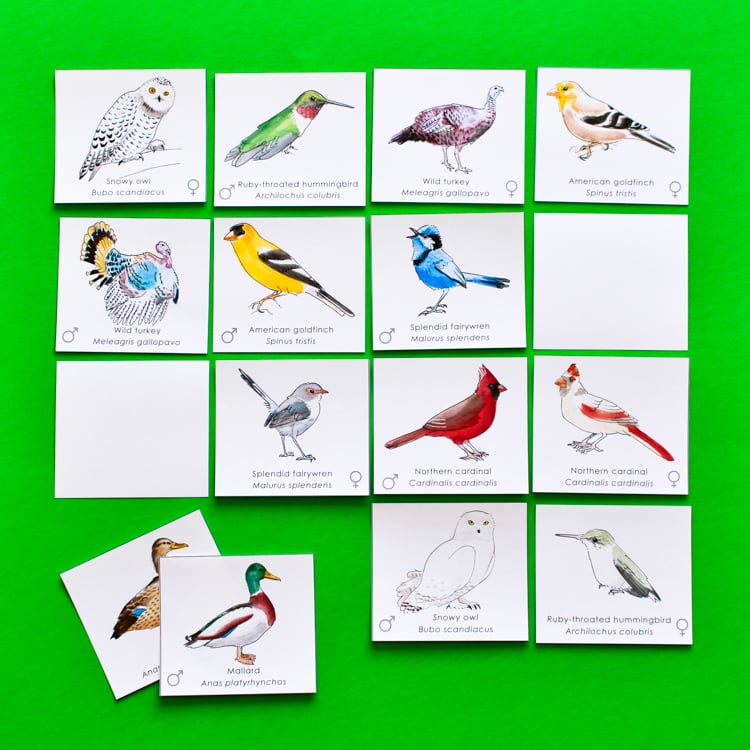 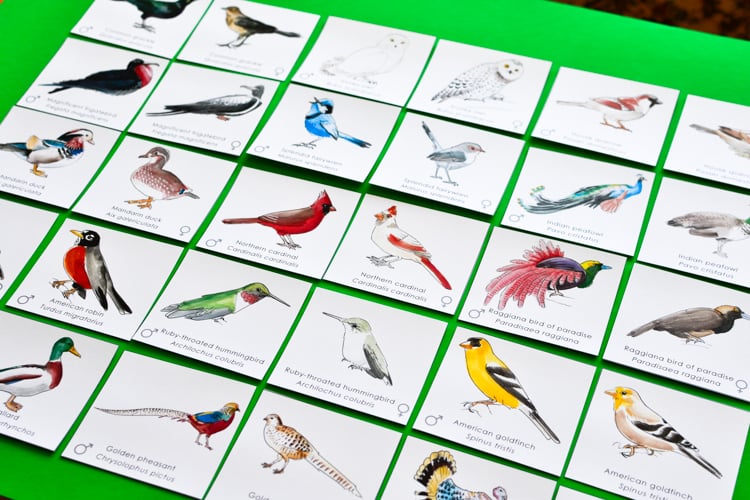 You can also buy this game as a part of our Nature STEAM Pack (60% discount!) along with other creative printable projects for exploring nature.

If you are studying birds with children, also make sure to check our other bird-themed games. In What Bird Am I? game, the players are attempting to deduce the identity of their opponent’s bird, by asking questions and using a key of twenty four birds. 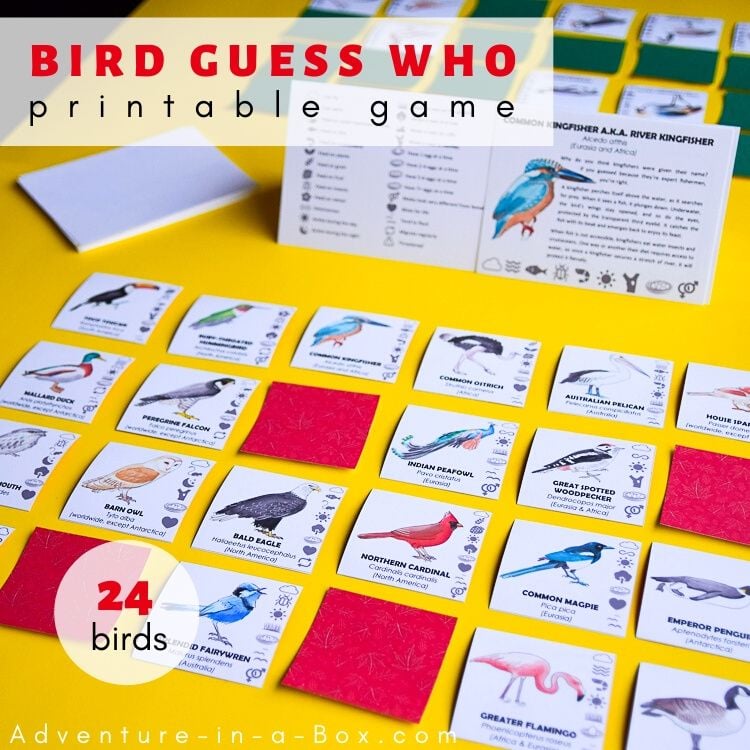 The Bird Bingo game features 48 species of birds from around the world. With beautiful watercolour illustrations and multiple levels of complexity, it will be interesting for bird enthusiasts of all ages. 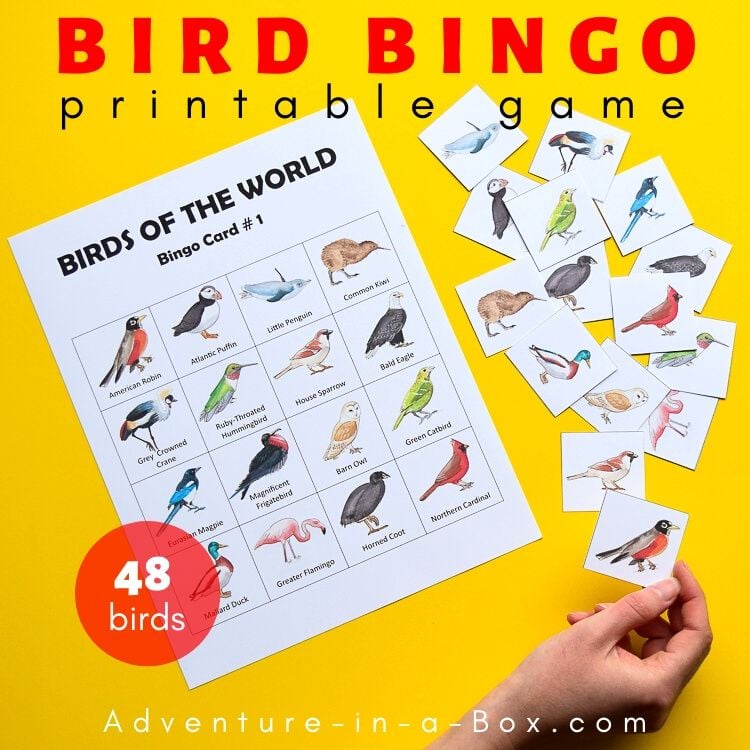