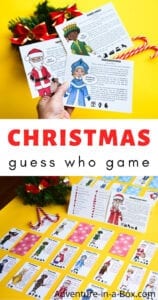 In places where the seasons are well defined and the winter months are cold, December often brings a celebration that revolves around a particular character who brings the festive spirit along with a bag of presents for children.

In the USA, Canada, and Australia, he is known as Santa Claus, a jolly old man who tumbles down the chimney on Christmas eve. In Europe, many countries are also looking forward to a visit from his prototype, Saint Nicholas, who comes in early December. In Slavic countries, people are waiting for Grandfather Frost, who looks and behaves similar to Santa Claus, but visits on New Year’s eve and brings his granddaughter along. In Scandinavia, the gifts are brought by a gnome, and in Iceland, there is a jolly gang of trolls. But the list doesn’t end here. There are plenty of other unique gift-bringers!

Christmas: Guess Who Game introduces players to a variety of winter gift-bringers and the traditions they are associated with, from around the world. It is easy to print, cut and play!

In an educational context, Christmas: Guess Who Game takes something everyone loves – holidays – and uses this theme as a starting point for teaching about geography and cultural diversity. After all, the closer it is to winter vacations, the more challenging it becomes to get any schoolwork done. Well, this game is perfect for that period! Children can use maps and learn about geography, make comparisons of folklore and traditions from around the world and employ syllogistic logic while playing the game. Yet it’s all about the holidays!

Not concerned with the educational aspect so much? Try it as a fun Christmas-themed board game at a family gathering! You can play it as a game of deduction, such as the traditional Guess Who Game, or as a party game, similar to the What Am I? game.

There is a lot of holiday trivia included, and it’s hard not to laugh when you discover such peculiar characters as Krampus, the Austrian gift-bringer with a whip, or the Catalan log Tió de Nadal that is known to poop presents…

Of course, not all the characters are that peculiar. Players will also meet some more familiar ones – like Santa Claus and a Christmas Elf!

Christmas: Guess Who Game will also make a fun little gift if you know a board-game loving family! Since it is all printable, you can make as many copies as you want and gift away.

Liked the game idea? Pair it up with our Christmas paper dolls!

Or get both the game and the paper dolls as a part of our Christmas Around the World bundle.

How to Play the Game

The basic version is a two-player game, where each player gets his/her own full set of cards and one information card of a mystery character that his/her opponent needs to guess.

Players take turns asking a “yes” or “no” questions about their opponent’s mystery character. Unless they are playing with bonus rules, they can ask any questions they like—the countries this character visits, the dates he or she comes, and, of course, about his or her particular features. The features are listed at the bottom of the cards.

In the example above, the blue player asks, “Is your character human?” The red player whose mystery character is Grandfather Frost says, “Yes.” Then the blue player flips over all the cards of non-human characters (Christmas Elf, Krampus, Jultomten, etc.).

While the character cards are pretty small, the information cards have a lot more about the characters, so it is fun to read them out loud, once the right guess is made. There is a name, a date of visit, countries of visit, a story behind the character, and their special seasonal greeting.

So, these are the rules for two players. But what if you want to play in a classroom or at a party?

There are variations on these rules that will allow several players to play at once!

To adapt the game for a classroom, for instance, Christmas: Guess Who Game features twenty big posters of all the characters. You could arrange them on a white board or on a table for everyone to see.

So, if you’re looking for:

…this could be a great game for you!

Get Christmas Guess Who Game!