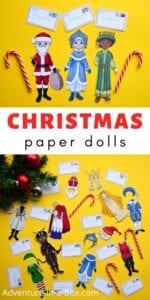 Learn about Christmas traditions around the world with Christmas paper dolls, featuring nineteen gift-bringing characters from different cultures! From the famed Santa Claus to the mysterious Olentzero, from the sweet Christkind to the horrifying Krampus—the world is full of interesting and unique traditions, associated with the season.

In places where the seasons are well defined and the winter months are cold, December often brings a celebration that revolves around a particular character who brings the festive spirit along with a bag of presents for children. Mostly they focus on the figure of a kind old man.

In the USA and Canada, he is known as Santa Claus. In Europe, many countries celebrate his prototype, Saint Nicholas. In Slavic country, people wait for Grandfather Frost, who also looks and behaves like Santa Claus. In Scandinavia, the gifts are brought by a gnome, and in Iceland, there is a jolly gang of trolls. They seem less related to Santa Claus, though share his sense of fashion to some degree. But the list doesn’t end here. There are plenty of other unique gift-bringers!

To celebrate this exciting world of winter holidays and cultural diversity, we have created a pack of Christmas paper dolls. There are nineteen of them in the set!

Who Are These Christmas Paper Dolls?

Did you know that in Russia, old Grandfather Frost is accompanied by his granddaughter, the sweet and beautiful Snow Maiden? She is as popular as her grandfather among the children, if not more so!

In Iceland, there are thirteen gift-bringers that come one after another! It is an opportunity to get thirteen presents, but if children want them, they need to behave very well for thirteen days straight.

And some of the Christmas characters are particularly unique – and they also bring unique gifts. Knecht Ruprecht, from Germany, just doesn’t spoil any children with sweets – he only brings switches to naughty boys and girls. Good thing he accompanies Saint Nicholas, who shares plenty of presents among well-behaved children. Some of his other followers include Zwarte Piet and Krampus.

The Christmas paper dolls can become a part of your Christmas unit study or go into your advent calendar if you like to make your own.

Also try our Christmas Guess Who game, a joyful game of festive deduction!

Or get both the game and the Christmas paper dolls as a part of our Christmas Around the World bundle.

This is an example of two printable pages dedicated to Snegurochka.

Here are some more information cards.

You can play a letter game, using a variety of envelope cards. Every envelope carries a hint at one country that celebrates this particular character—look for it in a stamp!

Send a card with Christmas characters to a friend – either a coloured version or a colour-your-own one!

Get the Christmas Paper Dolls Pack!

You can get a sample of the pack (with Santa Claus and Elf costumes) for free here!

This material objectively presents the traditions in different cultures without any judgement of the belief-systems behind them. Many gift-bringers came from Christian traditions (Christkind, Saint Nicholas, Saint Lucia, and, surprisingly, Befana), while others have pagan or secular origins (Yule Lad, Julnisse, Snow Maiden).

How to Make Dress-Up Paper Dolls

It is very easy. Cut the dolls from the pages with the base dolls, then cut the clothing layers out. You don’t need anything more than scissors for cutting.

You can make a classic paper doll with the paper layers that attach with folding tabs, as you’ve seen on all the pictures, or you can make a magnetic doll to go on a fridge or magnetic board. In order to make the doll magnetic, you can either print it on special magnetic sheets OR print it on standard paper and adhere little strips of magnet tape to the back. For extra long life, laminate the clothes and the dolls before gluing magnets to them.

Magnetic dolls are even easier for little kids to handle since they do not need to fold tabs!

Find all of our paper dolls here!

Learn about going to school around the world with this doll set!