Inspired by the Montessori colour tablets, we decided to make our own gradient blocks. At first, I thought that they’d be a sturdier version of paint samples for creating a handmade gradient puzzle, but they actually turned out to be a very open-ended toy! 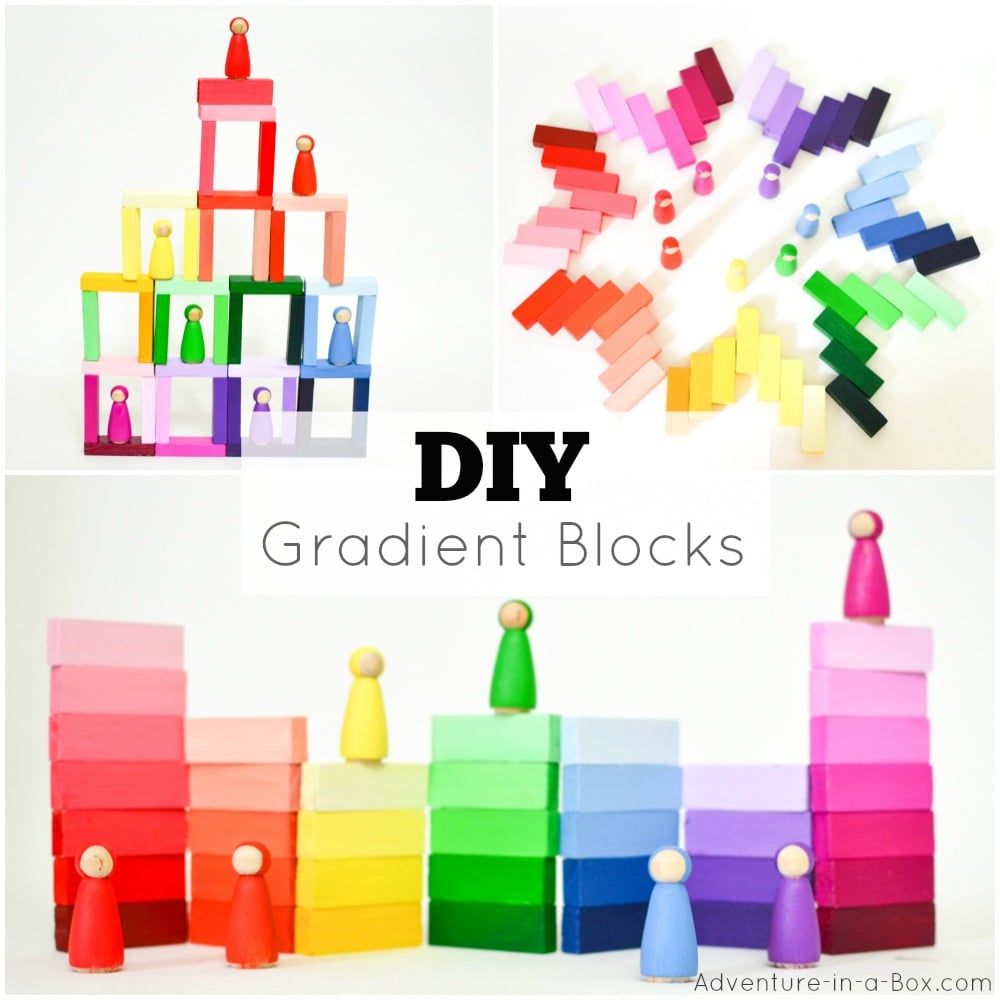 Truth be told, Budster already has lots of blocks. We bought him a set of Melissa and Doug standard blocks for his first birthday, then saw their complimentary set of architectural blocks at a thrift store and couldn’t pass that one either. Another time, the same store carried these beautiful water blocks that we added to our collection as well, and I put together a handmade version of mirror blocks and sand blocks.

A great variety of blocks, but all of them have one thing in common, and it’s the bare wooden finish. It’s our preference, because the bare wood is beautiful and pleasant to touch, but the colourful gradient blocks sure brought a splash of colour to Budster’s building corner, catching his attention as soon as he saw them!

As an afterthought, I painted a few peg dolls to go with the blocks. I thought that they may add an extra imaginative element to Budster’s play. They sure did! Budster started by building houses for the dolls. 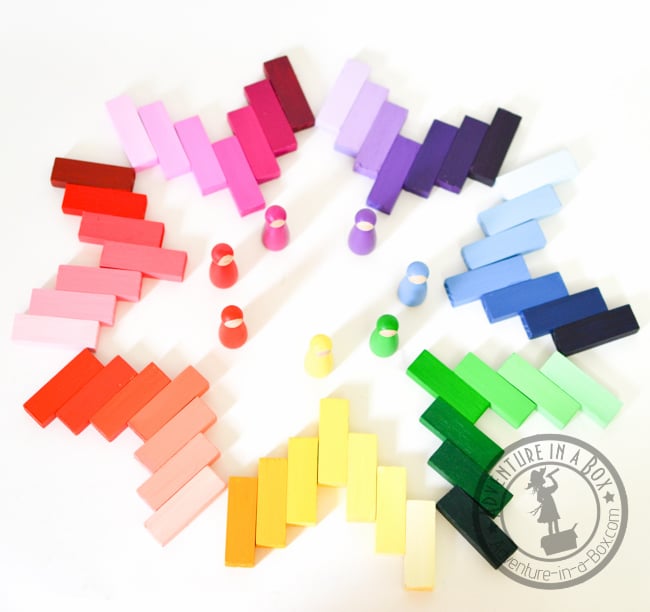 Budster made a great show of carefully putting one block on top of another, then quickly withdrawing his hands and watching anxiously. Is it still standing? Oh, that’s a relief! Alright, time to put another block on top.  The house tumbled over several times, which caused some distress to the builder, but Budster kept trying. It was great balancing practice, and he did end up carrying out his plan – up to the roof and chimney!

Once the house was finished, Budster had a few yellow and blue blocks left. He used them for making the swimming pool and bench that you can see on the foreground of the last picture. 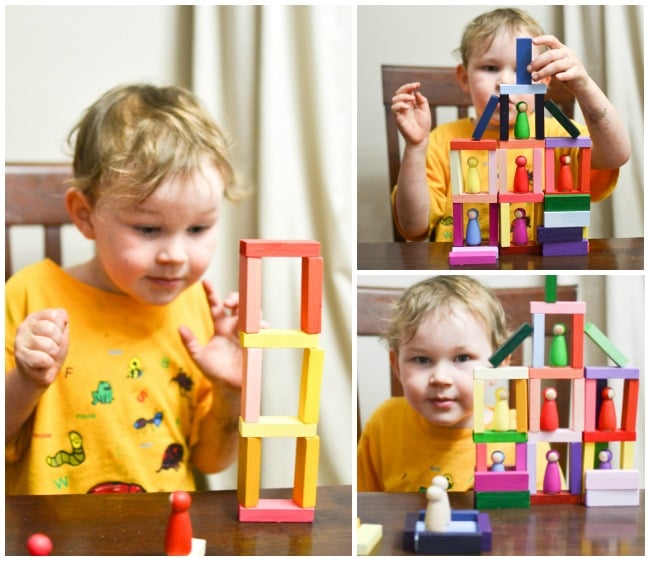 Budster and I also built a village of little houses. Each resident got a dwelling of a matching colour. Reminds me the little Venetian island of Burano! Every house there is painted a bright colour, and if someone wants to have it repainted, they have to check with the local authorities who will respond with the list of the colours permitted for that lot. 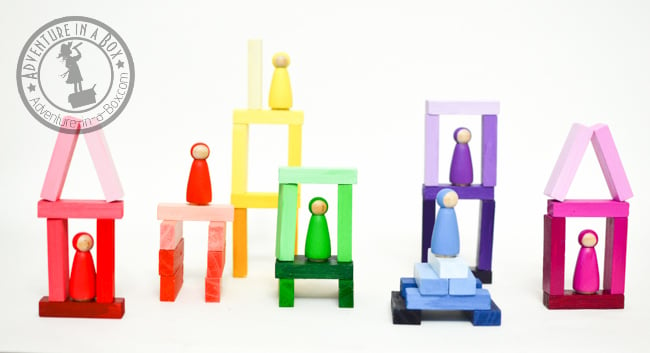 With all of Budster’s architectural plans, we didn’t even get to making the puzzle the first evening. The next morning, I pointed out to him that we could use these blocks to create a rainbow and a gradient of colours.

We started simple. I demonstrated to him how to arrange the red blocks by shades from the darkest to the lightest, and sure enough, Budster said that he wanted to do it too! At first, I helped him by choosing three blocks at a time and asking questions, “Which is the darkest?” He’d choose, and I’d ask again, “Which is the darkest now?” After a couple of rows, I stopped offering three blocks, and he began choosing the darkest of all seven. By the time we got to purple, he could complete the row without my help. 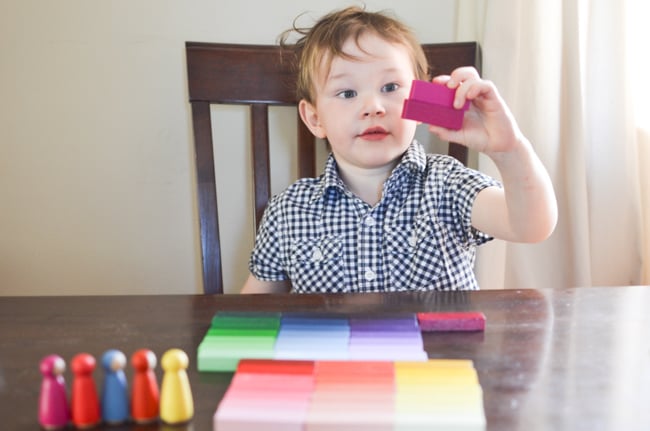 Such a pleased grin upon completing the whole puzzle! His favourite part was finding the right place for the peg dolls in the end. 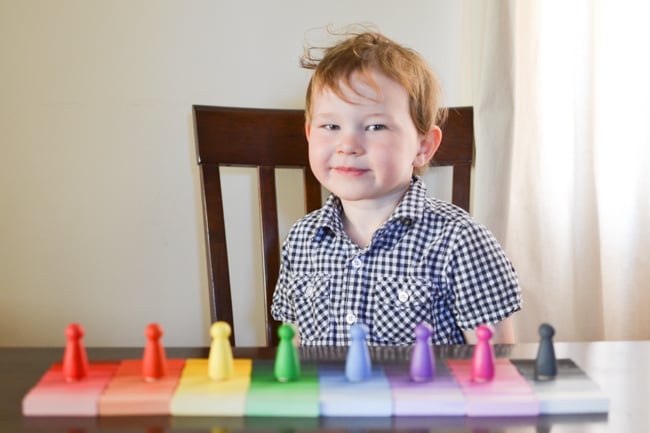 When kids complete the puzzle flat, they can also try stacking blocks up and building it vertically! 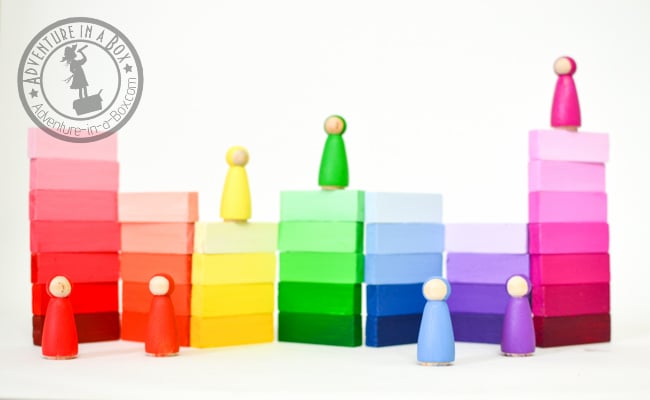 If you’d like to make your own set, it’s very simple and cheap. And kids can help!

How to Make Gradient Blocks 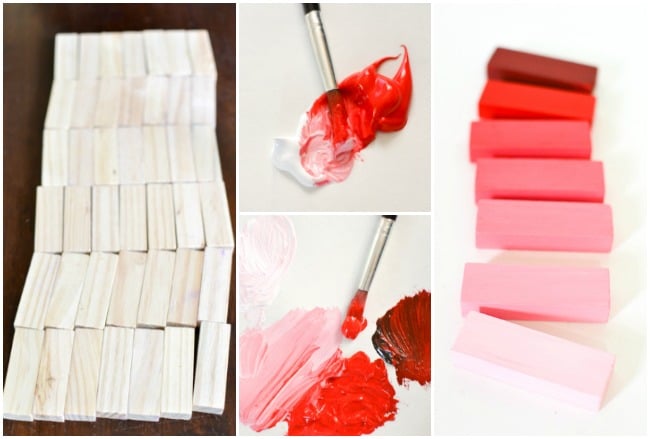