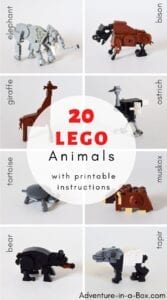 Use LEGO animals instructions to build twenty animals from all around the world and their habitats!

LEGO must really be one of the most amazing toys ever invented. It allows children to explore any concept in a hands-on way! When my children learned letters, we made an alphabet out of LEGO. And when we studied animal habitats, we made habitat dioramas from LEGO.

Of course, habitats need animals! LEGO has some standard animals – crocodiles, frogs, and parrots, but since that isn’t enough to fill all the habitats, we had to add a few of our own making.

At the same time, we researched each animal and its adaptations to living in certain conditions, which was very interesting. After all, some spend their whole life in perpetual winter, like Emperor penguins, and others have to survive in the desert, like tortoises and ostriches.

You can read about how they do it in our LEGO Animal Habitat pack that includes fun facts about the animals, their adaptation techniques, as well as the photographs of the animals that we modelled our LEGO creatures on.

Some of them were pretty easy to build, like this penguin and this tortoise.

But our favourites were more complex, articulated animals, like an elephant and a bison. The elephant has articulated legs, trunk and ears! We have tried to use parts that are commonly available with modern sets, but every LEGO builder’s collection is different, so you may need to substitute some of them.

Other animals include an Arctic fox, a muskox, a giraffe, a western grey kangaroo, a black bear, a Canada lynx, a common raven, a giant panda, a Siamang gibbon, a Malayan tapir, a Southern cassowary, a Somali ostrich, a Guanaco, a Beluga whale, and a Big-eye tuna.

All of the animals have been made to scale with a standard LEGO minifigure, so they will integrate well with the LEGO world. You can send your LEGO people on adventures—to rainforests and deserts and have them interact with penguins, elephants, and pandas!

Inside of the pack, you will find step-by-step instructions for building 20 different animals, as well as a list of parts needed for each of them.

You will also get a booklet that describes each habitat, its main features, its plants and animals. The LEGO model of each habitat in the booklet is accompanied by real-life photographs. Following the description of the habitat, you will find pages featuring some animals that live in them. They include animals’ common and Latin names, fun facts about them, their adaptations to habitats, and photographs.

How to Use the Pack

There are many ways to use the pack. You can use it for doing a project on habitats or as a hands-on project while learning about animals.

Depending on the size of your group and the level of interest in the subject, you can work through the habitats, building one after another; read about all of them, but only pick a couple of the most interesting ones for building; or assign one particular habitat per child or group of children.

If you focus on animals, children can read about the ones in the pack and build them following the provided instructions, then find their own animals to build and research.

Here are a few other tips and tricks for building!

Organize your bricks: Save time by organizing your bricks into colours and types before you start building. Grey and black are usually the most popular colours in LEGO collections, and they tend to have the most interesting parts. That’s why many of the animals we built are grey and black!

Be creative: If you don’t have the perfect piece, look for a different piece that can create a similar effect. If the blocks in your collection are completely different, use the card for inspiration – and build a version that is completely your own!

Research: To inspire your ideas, look for pictures of the animals you want to build.

Get the LEGO Animal Habitat Pack!

Do you also like pattern blocks? Build 50 animal designs from them!

Build the DUPLO animal alphabet – from A to Z!