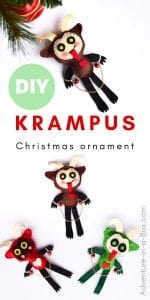 Decorate your tree with a DIY Krampus ornament, in celebration of the famous Christmas beast from Austria! Made from felt, these homemade ornaments are so easy that even kids can put them together. 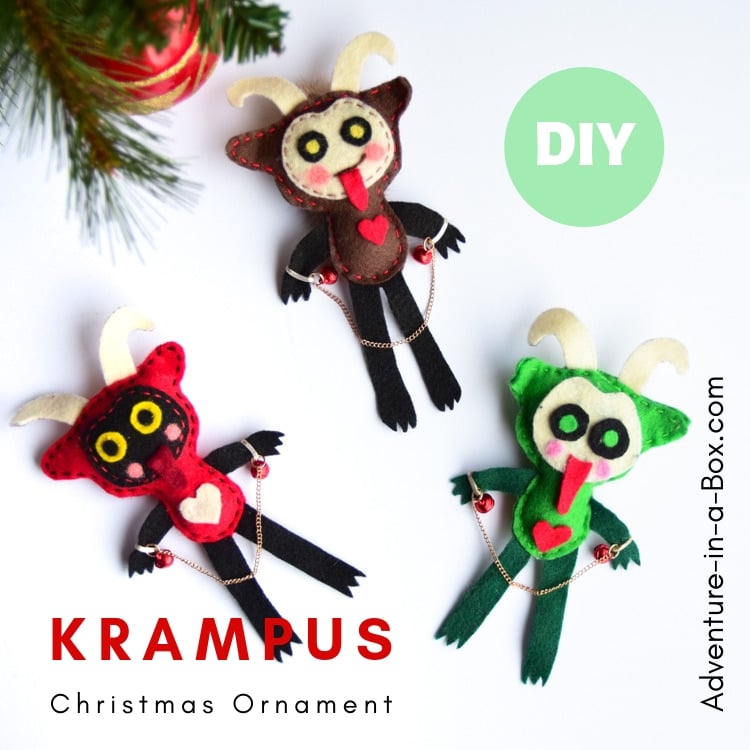 Have you ever heard of Krampus? He is half-demon and half-goat. He comes our at Christmas time to scare children into behaving themselves. If they don’t, he whips them or sticks them into his basket. He’s been around for centuries, but over the last few decades his notoriety has made a resurgence in his native Austria, where many towns organize Krampus parades in his honour. Young people, both men and women, dress up as the scary mythological beast and have a run through the streets. Now Krampus is becoming increasingly familiar in North America. After all, he sounds like a downright pleasant guy, right?

Actually, when I first saw a video of Krampus parade a couple of years ago, I thought that my husband and son had found themselves a rather strange sort of entertainment. I was also convinced that quite a few kids might not want to go to bed after watching such a spectacle, but my son shrugged off my concern and insisted that it was funny. After that, Krampus became a family joke, and the kids really took to the idea of a scary Christmas character.

Why? Probably, for the same reason they find things like volcanoes or earthquakes to be exciting. They tickle my son’s imagination with their destructive nature, but he rests assured that they don’t pose him any real danger. For the same reason that many kids enjoy listening to ghost stories, told in the safety of their beds. Many children like to be scared – but not too scared – and psychologists say that it’s good for them because it gives them an idea of how to cope with fear and boosts their confidence. Which makes Krampus a very important Christmas character indeed. :-)

But Krampus doesn’t always have to be scary. If you look at old Krampus postcards, he is more like a cheeky imp than a scary demon. That’s how I drew him when I made a Krampus dress-up doll for my kids (Krampus is the third from the left!), and the same stands for the children’s books about Krampus that we found to read with our kids. 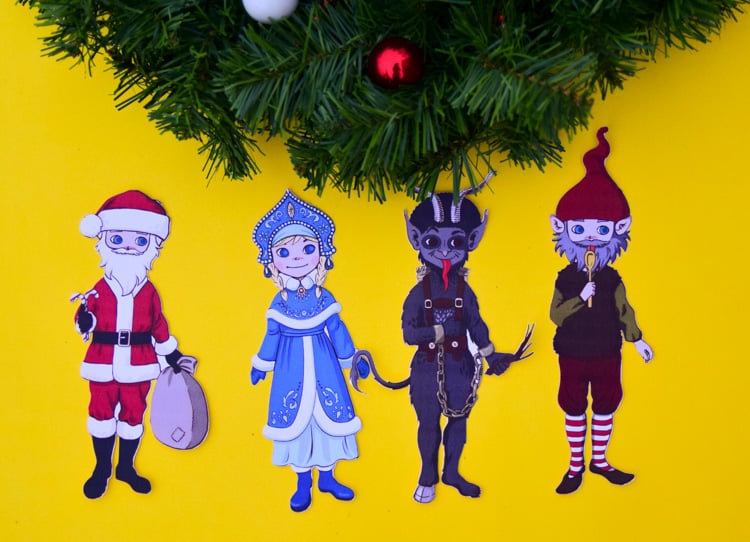 Learn about other interesting Christmas characters around the world! Play board games, dress paper dolls, read and colour pages, while at the same time learning geography, history, and folklore, with the Christmas Around the World bundle. 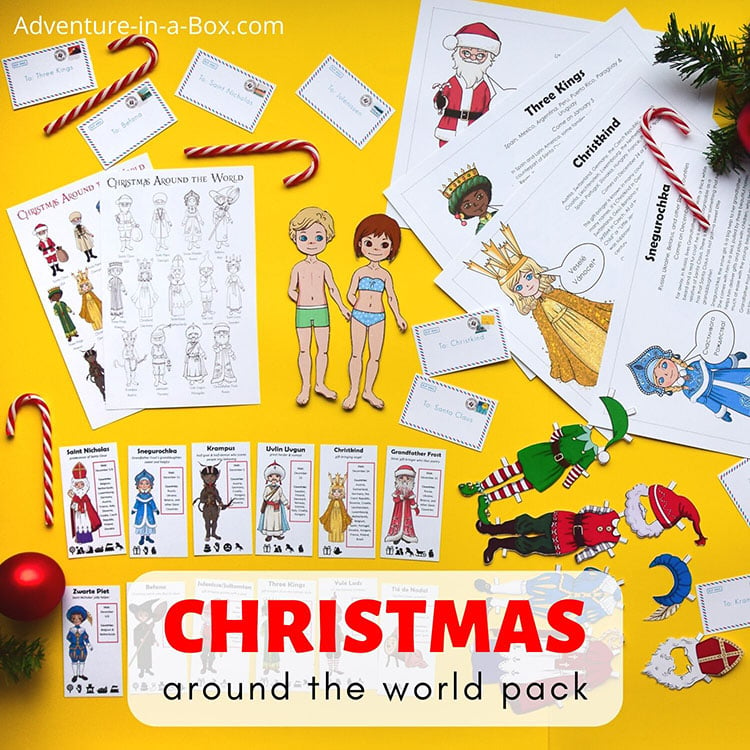 Books about Krampus for Kids

Goodnight Krampus is a board book for little kids. Krampus is introduced as the most mischievous of Santa’s little helpers. There is a grain of truth in it since Krampus comes to Austria as a companion to Saint Nicholas, who brings gifts and sweets for well-behaved children. Krampus, as mentioned above, only brings his switches and basket for naughty children. If children don’t know about those attributes of his character, they won’t find it out from the book. My two-year-old daughter knows all about Krampus, though, and she even seems to have a little crush on him. Is it “bad boy” appeal? If you listen to her, she will be happy to tell you how she would like to hug Krampus and take him to a playground. She thought this book was great. It fell right in with her vision of a furry little friend who just likes to have fun. 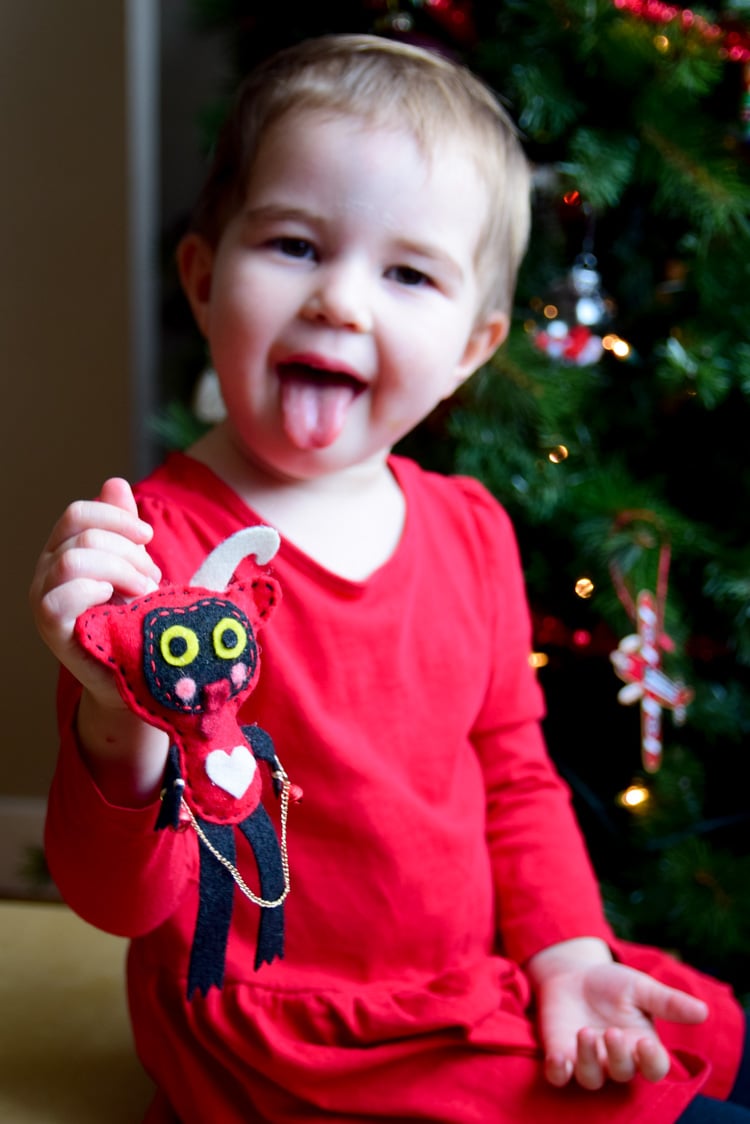 If you want to share the real message of Krampus, go for the picture book Krampus: a Holiday Message. The book is written as Krampus’ monologue. In a tongue-and-cheek manner, the beast encourages children to be as bad as they can be, so that he can visit them at Christmas time. The illustrations are playful, and Krampus himself is rather charming. But make sure that your children are capable of handling the message “behave, or else be eaten” with the skepticism and humour it deserves. Otherwise, wait until they are a few years older. My six-year-old liked it, but he’s also been watching Krampus parades with interest for a few years. Basically, I would recommend this book for studying different Christmas traditions with older children (6-9).

Make Your Own Krampus Ornament

This year, we shared the image of Krampus with other family members, and he became sort of a mascot for our upcoming family Christmas celebrations. After a certain age, it doesn’t seem to be as fun to believe in Santa Claus. But Krampus unites many generations, including even skeptical teenagers!

Naturally, then we wanted to get a few Krampus decorations for our Christmas tree, but it isn’t as easy here in Canada as it might be in Austria. So we ended up making our own.

It’s a good beginner sewing project for kids, so if you are learning about Christmas traditions around the world with kids and looking for a way to celebrate the unique Christmas beast, this may be a good opportunity to bring Krampus into your house. My son and I are planning to make more as gifts. 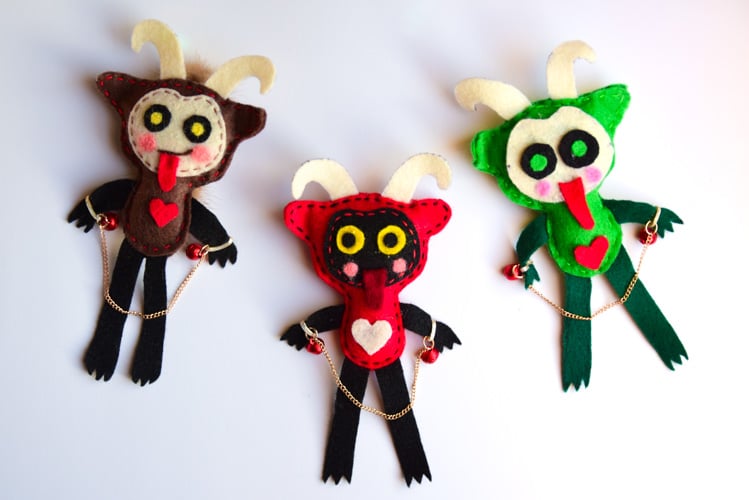 Materials for Making the Krampus Ornament

How to Make the Krampus Ornament

1 — Cut the pattern out and transfer it onto felt as many times as indicated on the pieces. 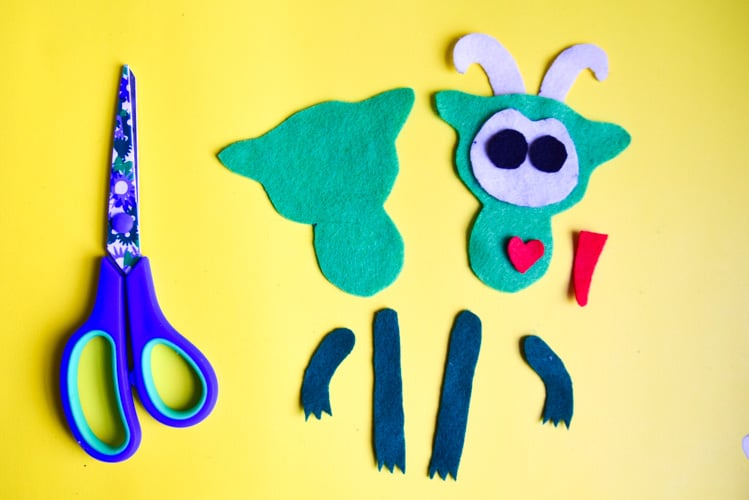 2 — Hot glue the limbs and horns onto the body. This will be the inside of the back. 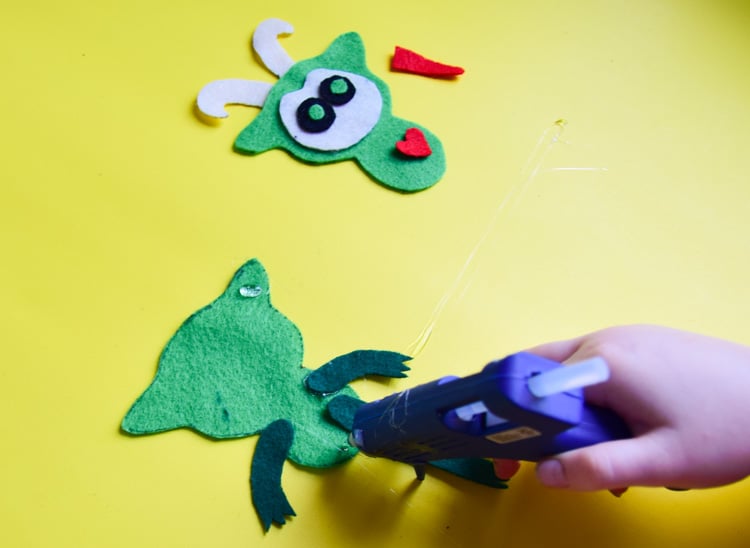 3 — Next, assemble the front and hot glue it together as well (the outside of the front). If you plan to stitch around the face, just tack it on with a bit of glue first to keep it in place while you stitch. if you want to do as little stitching as possible, as was the case with my beginning sewer, then glue it on thoroughly and forego the stitching. 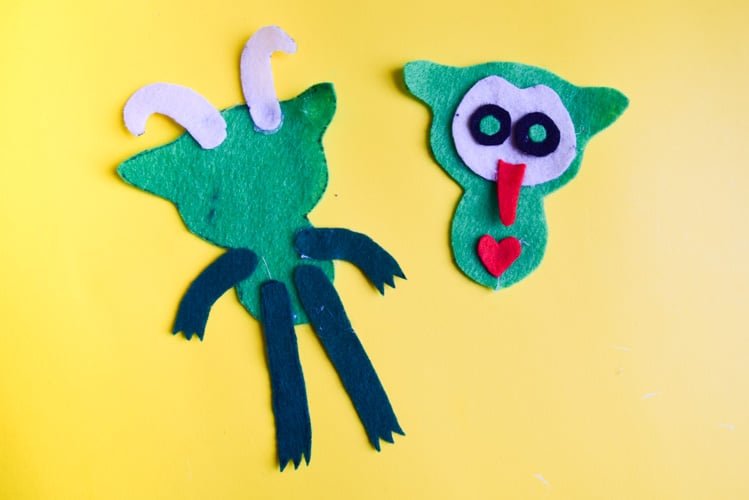 4 — (optional) Needle felt some blush onto Krampus’ face with a little bit of pink wool. If you haven’t tried needle felting before, check here for tips on how to start. 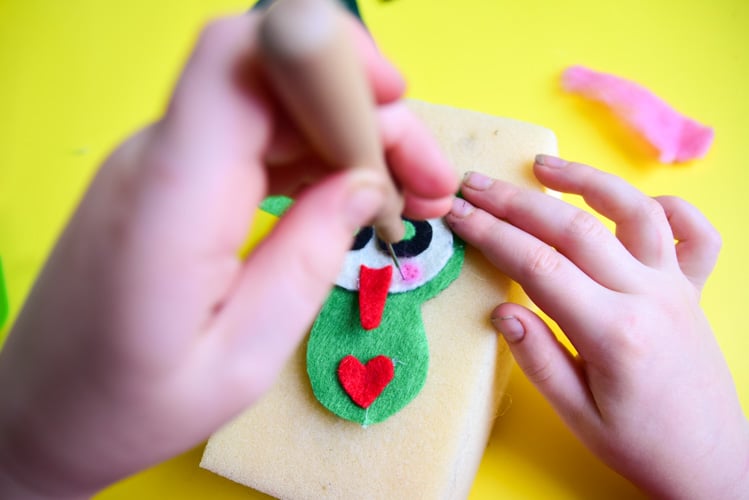 5 — Sew the two parts together, leaving a small opening, so that you could stuff the toy. 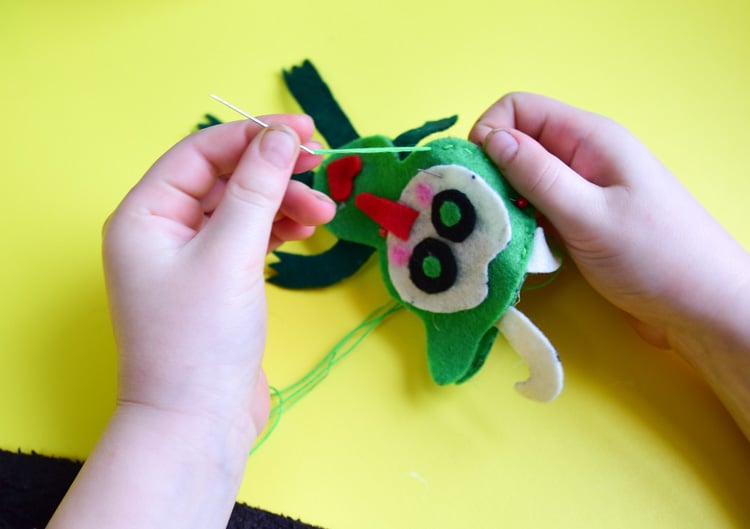 6 — (optional) Krampus is often portrayed wearing chains and manacles, so we used a cheap necklace to supply our miniature Krampus with those. 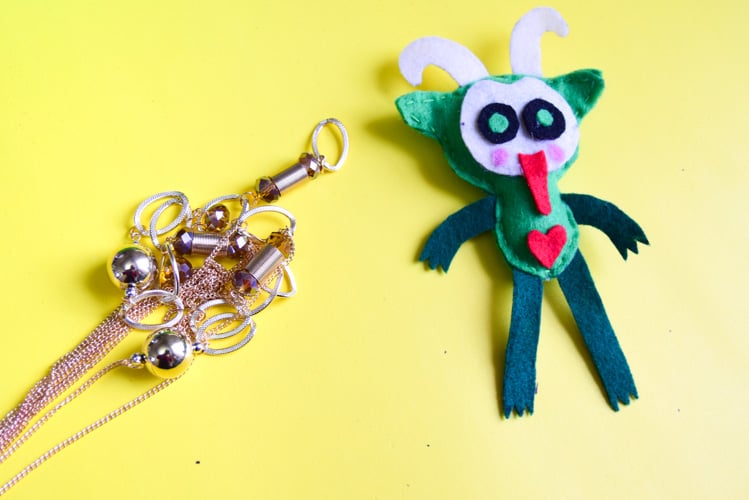 We used pliers for cutting the chain and bending the decorative rings into manacles. Later, we also attached a couple of little bells to them. Krampus often wears a bell to give all those naughty children fair warning to smarten up and be good! :-) 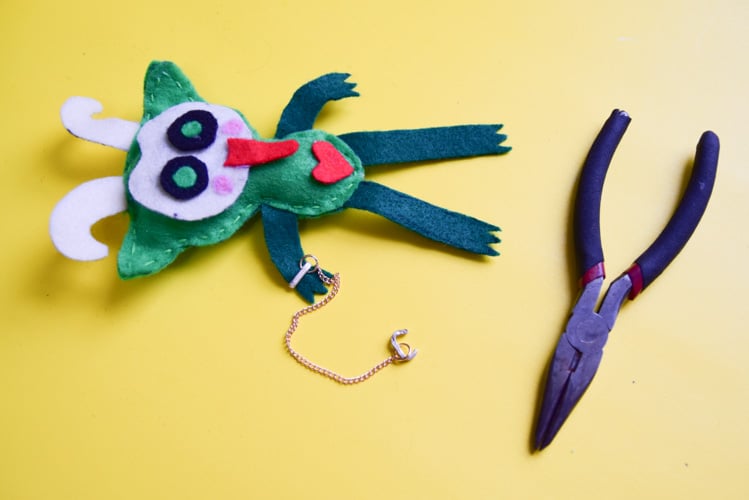 Here is my son with his very own Krampus. I think they’re planning some mischief together. 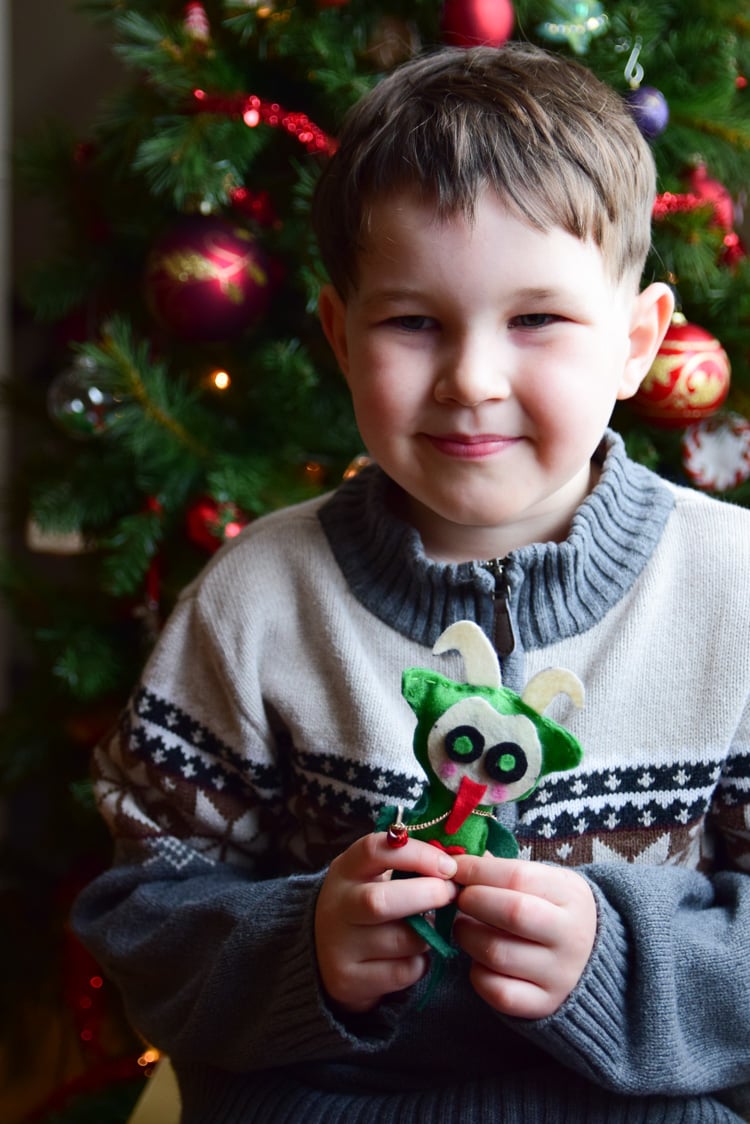 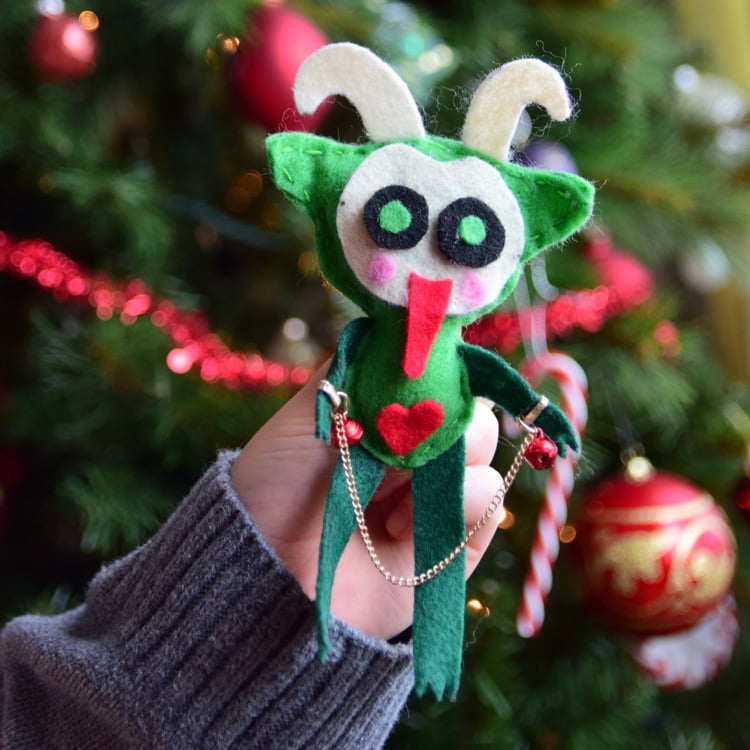 Here is the Krampus that I made alongside him. 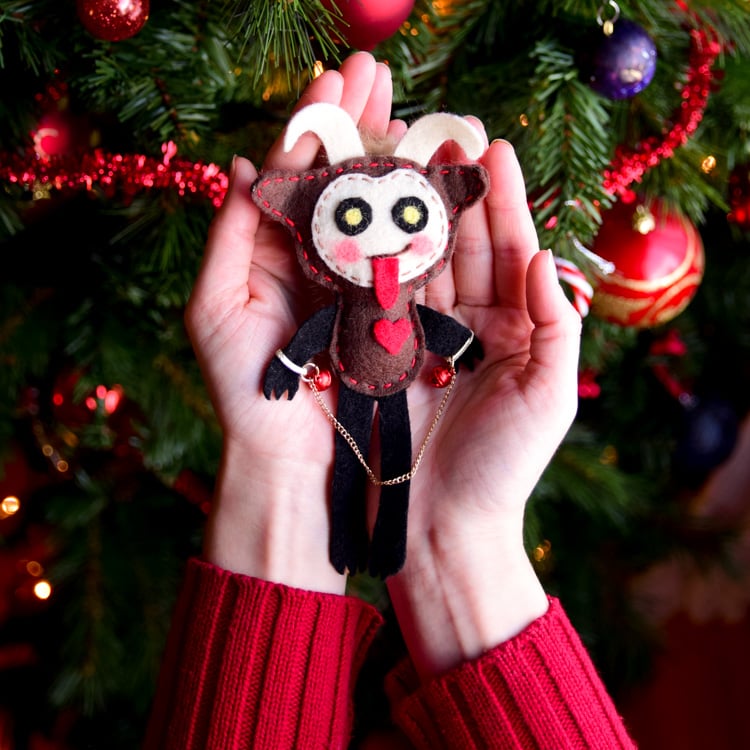 Not a very scary Krampus, but we like him this way!

Check this amazing series of ornaments made by kids and inspired by children’s books!

Here are a few fun ideas:

String Art Ornament for Beginners from Feels Like Home 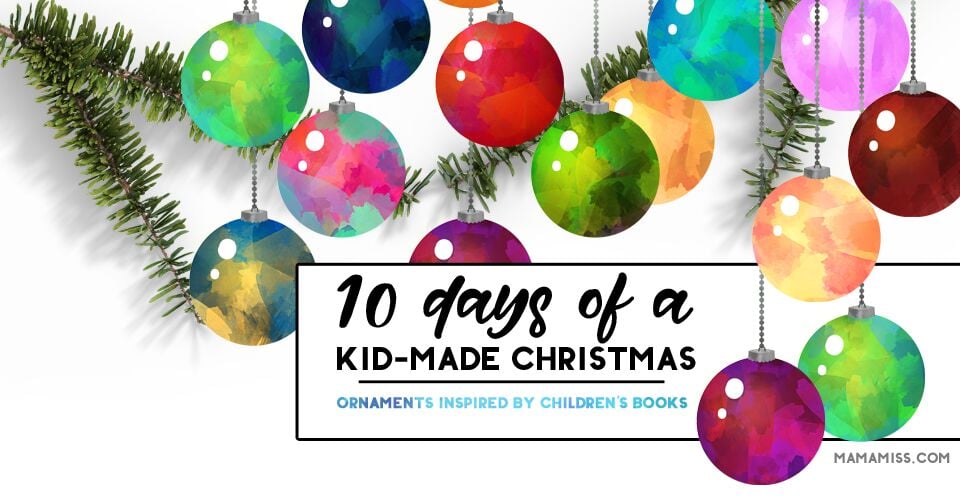 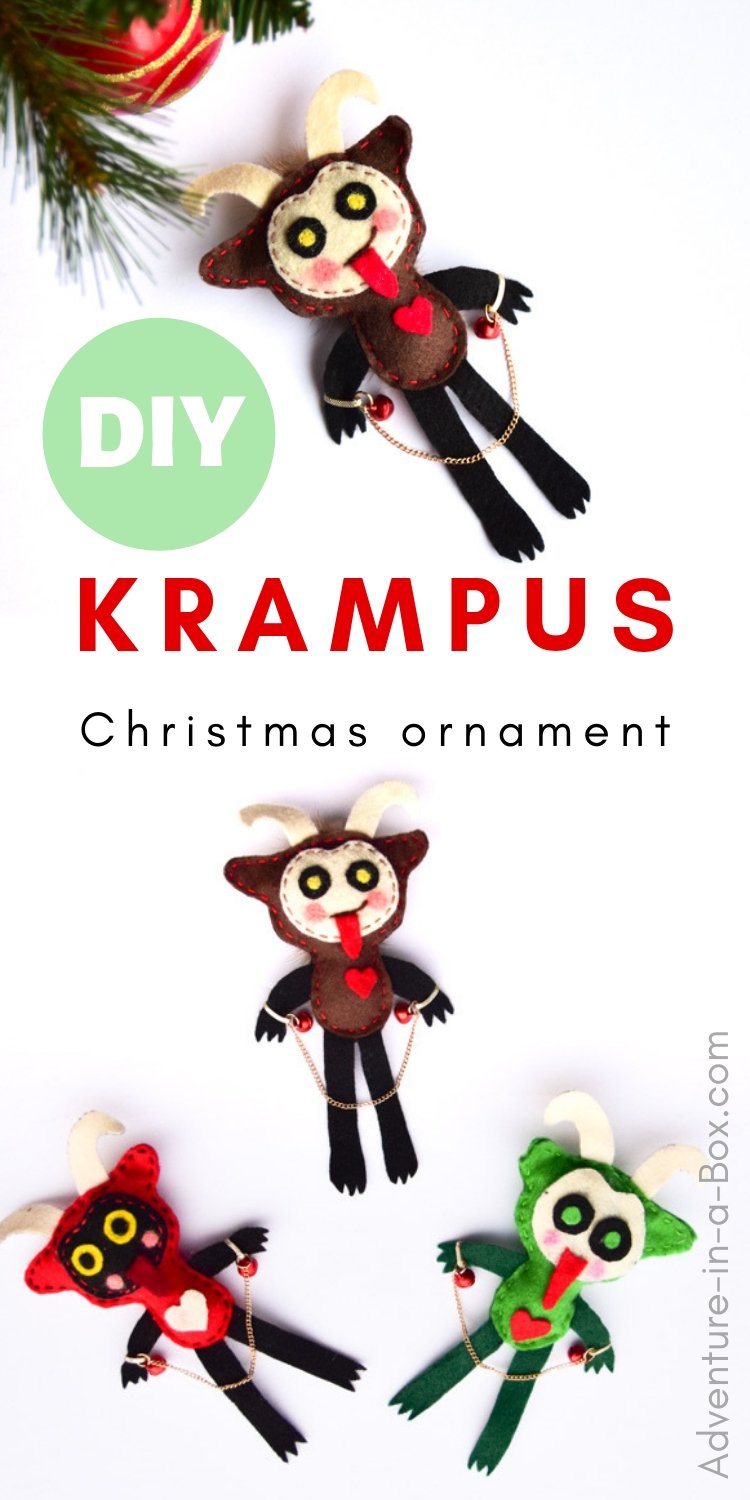