If you want to try a new craft with older kids and tweens, consider needle felting! Using pompoms, wool and felting needles, they will create a cute woollen emoji craft that can later be used for decorating backpacks. 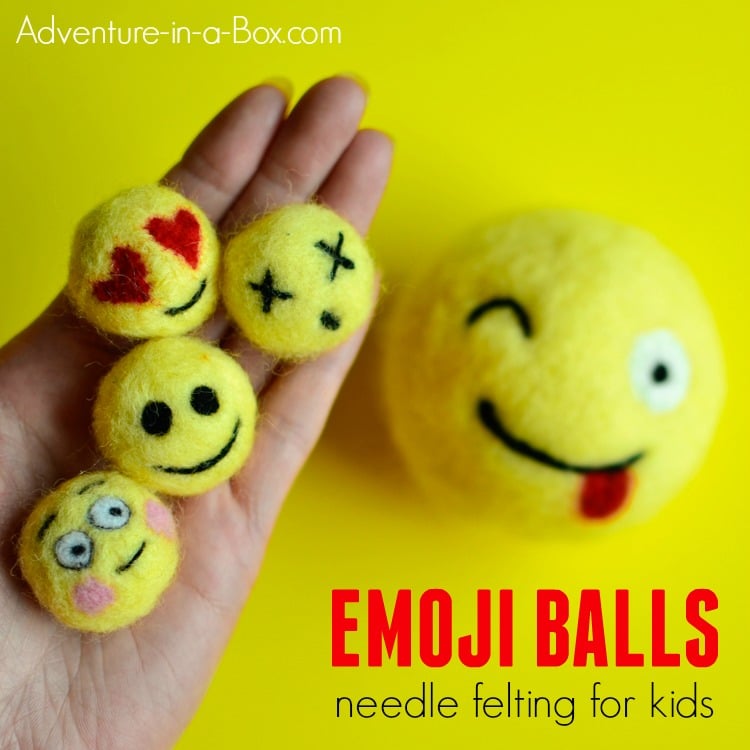 While the popularity of emojis with kids remains unexplained, it is a fact that the yellow guys are well liked by kids of different ages. Even my toddler is attracted to their funny yellow faces! And making emoji balls from wool is surprisingly easy, and great for introducing kids to the little-known but increasingly popular craft of needle felting.

It took me a decade from when I first heard about needle felting until I dared to try it. It sounded a little daunting – especially the “needle” part. I wasn’t all that skilled with needles when it came to sewing or embroidering, so I never thought I’d give it a go. But one day I did, and I really loved it! It wasn’t like sewing at all – more like sculpting. Needle felting gave me an opportunity to make little stuffies and textile toys for my kids, where I wouldn’t have been as likely to by sewing. And when I did get around to sewing, I could use needle felting for adding details (like on this unicorn hobby horse).

It has been such a positive experience, I really wanted to share my fascination with other crafters. This project is a good introduction. Turning pompoms into woollen emoji balls is very simple, but it does showcase the idea behind needle felting! 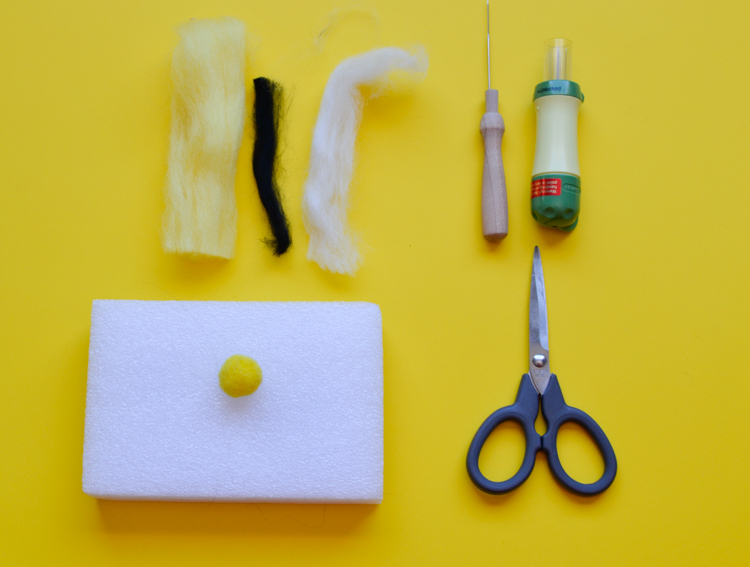 If you want to read in detail about all the different tools for beginning needle felting, check this post!

How to Make an Emoji by Needle Felting

1 — Wrap some yellow wool around the pompom and poke the needle into it over and over packing the fibres around and into the ball. The photo below is taken during one of the beginning stages, so you can see some excess wool. When making some balls, I would wrap a small piece of wool all around, trying to distribute it evenly. With others, I would use lots, and cut the excess off. 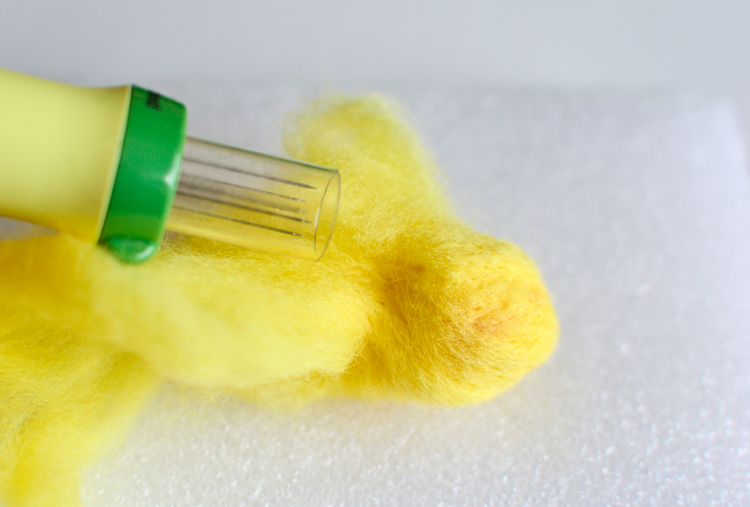 2 — I would usually finish with one needle. If I saw fibre poking out, I would push it down with the needle. 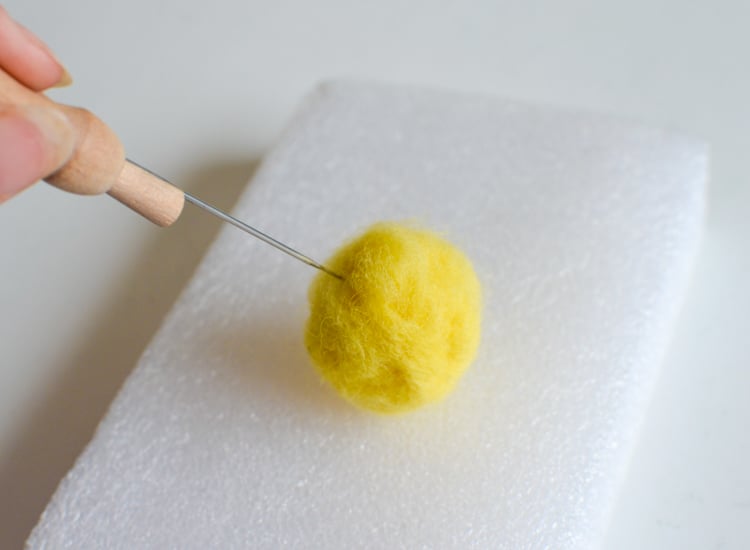 …Until all the fibres are smoothed down, and I have a woollen ball. 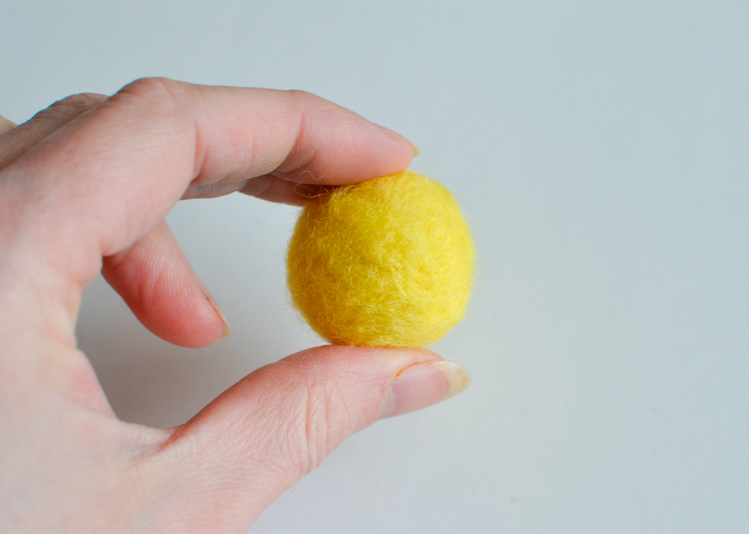 3 — Next, prepare the black wool by rolling it in-between the palms into a thick string. 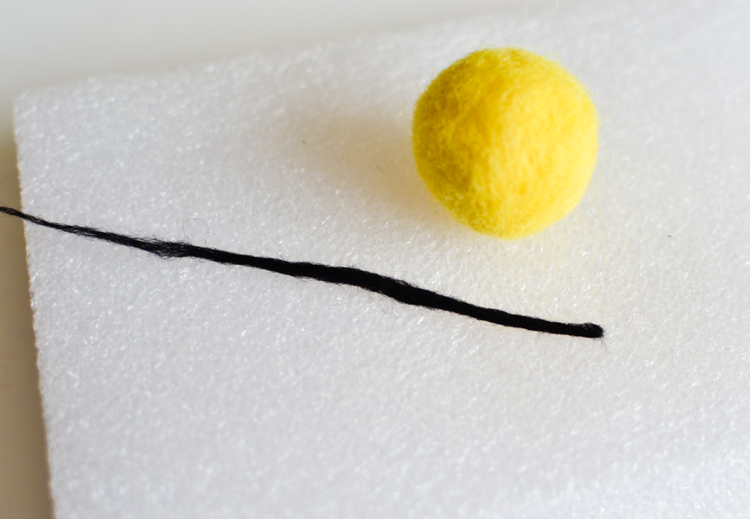 4 — Test fit and cut a piece that is right for the mouth. 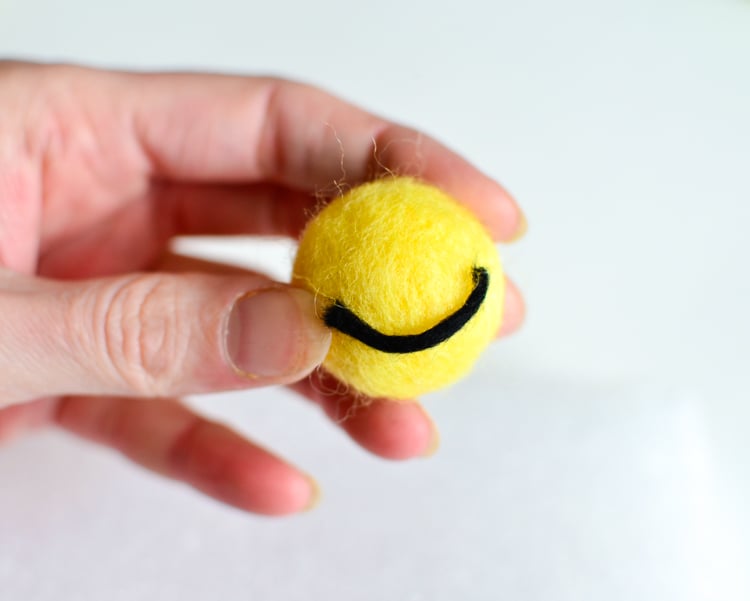 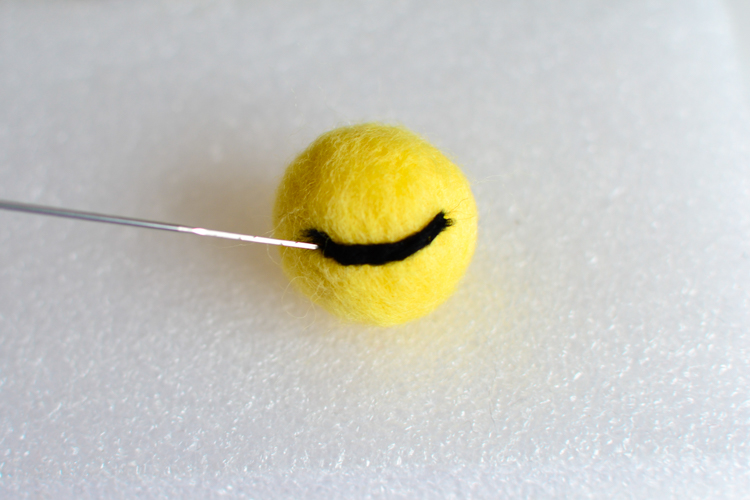 6 — Do the same for the eyes. After cutting the eye pieces off the string, make them into rough balls by rolling the wool between hands. Needle felt them on as well. 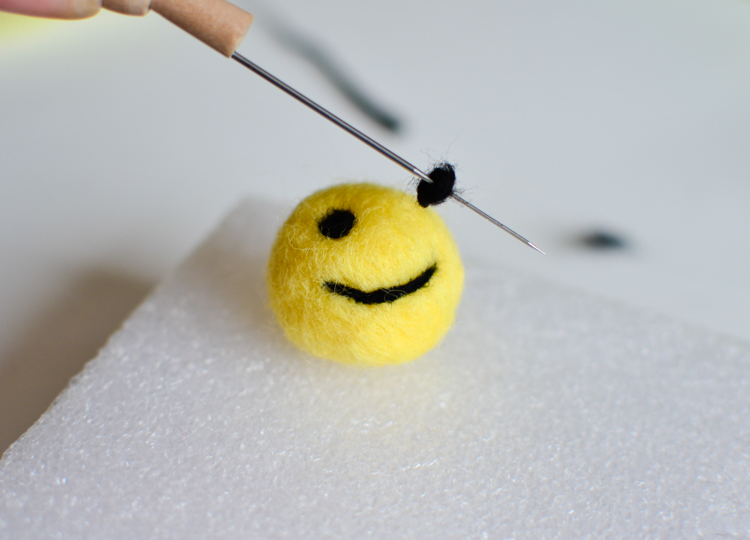 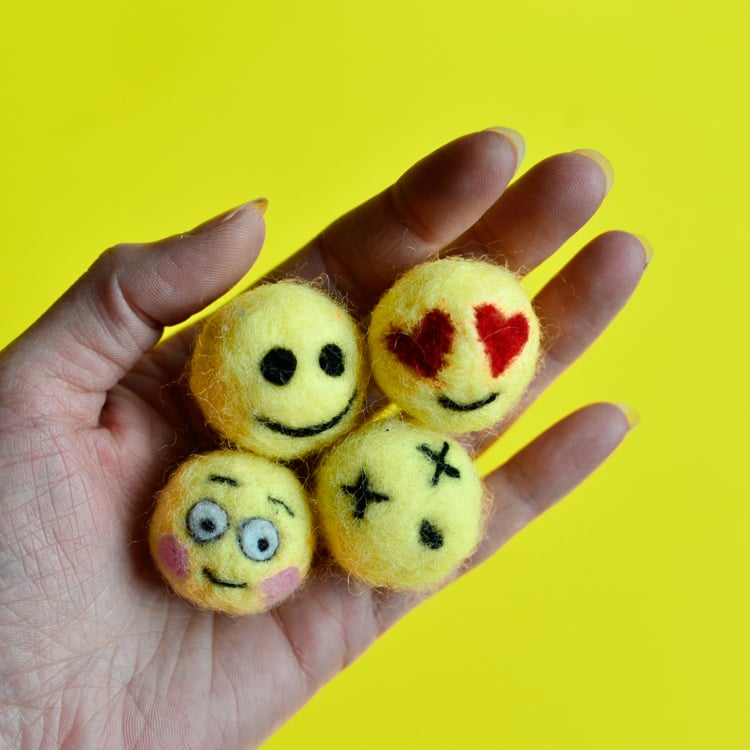 The blushing one was the most difficult to make. Blush wasn’t a problem, but outlining the eyes with thin threads of wool was a little tricky.

And if you have a big pompom (or one of those indoor snow balls which is what I used since the kids don’t play with them anymore), you can make a very big emoji! 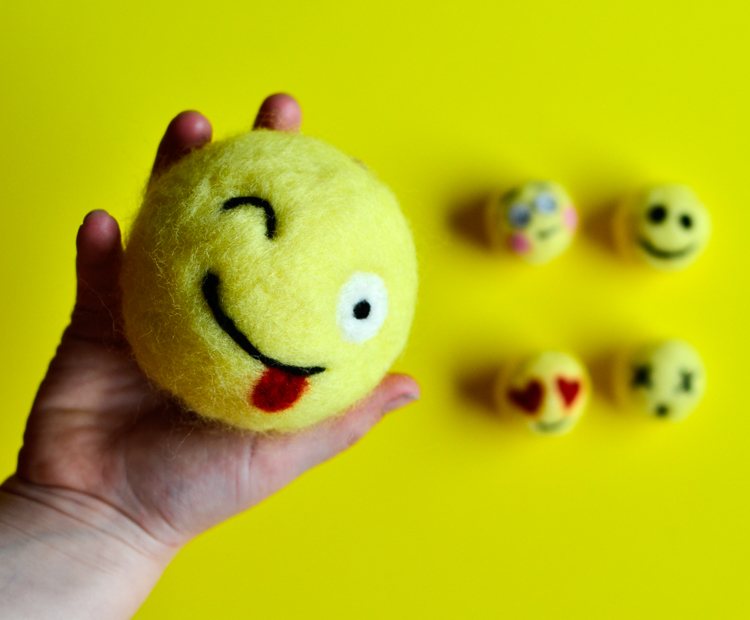 What to Do with Emoji Balls?

Play with them like toys – balls or stuffies. My toddler really liked to throw them across the room, and my five-year-old gave them names and played with them as if they were some funny creatures. They both have this funny attraction to emojis that a lot of children seem to share!

Older kids can sew a string onto their emoji – or use a pin – and attach them to pencil cases, backpacks, etc. Here we did it on my son’s backpack. 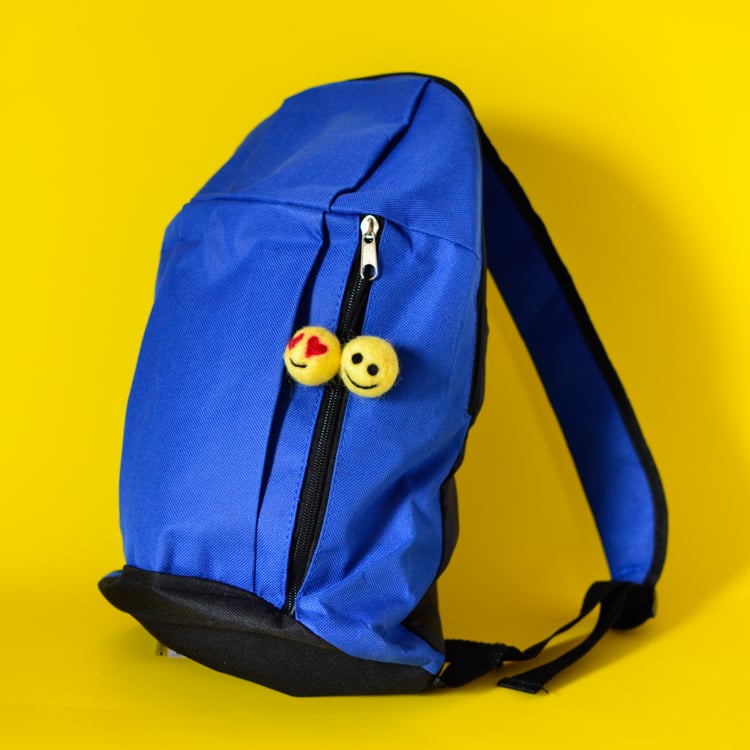 Most of all, this is just a good project to give kids a first try at needle felting. Because of the pompom core, it doesn’t take long to make a ball (5-10 minutes), and the facial features come together even faster. So it wouldn’t try anyone’s patience, while still giving a feel for the technique. What’s the right age? As always, it depends on the kid. I trust my five-year-old with needles, under supervision, but even at that, he hasn’t quite mastered the technique, though he was excited to try. I think that it’s most suitable for 9-10-year-olds, though an enthusiastic crafter a couple of years younger could do it too. 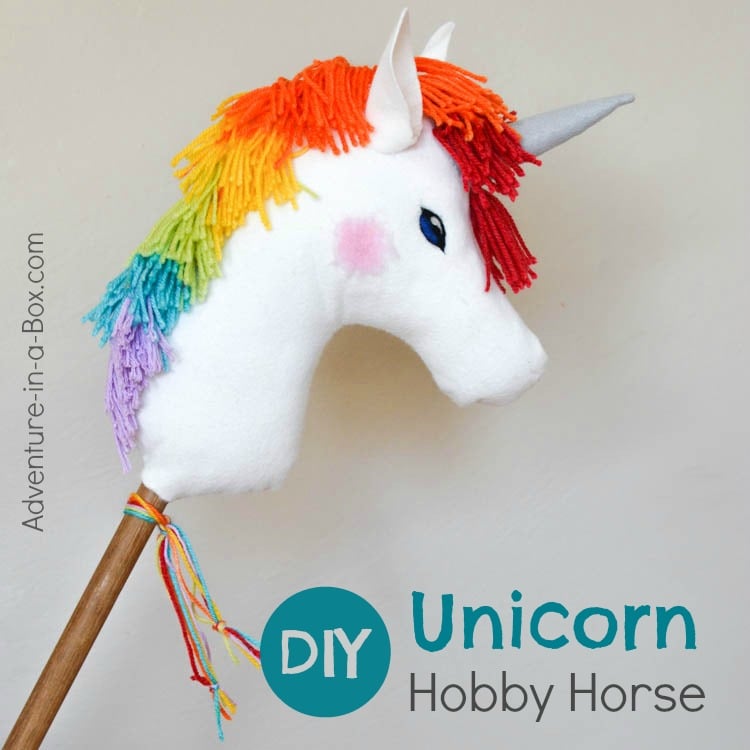 Read all about useful needle felting tools for beginners. 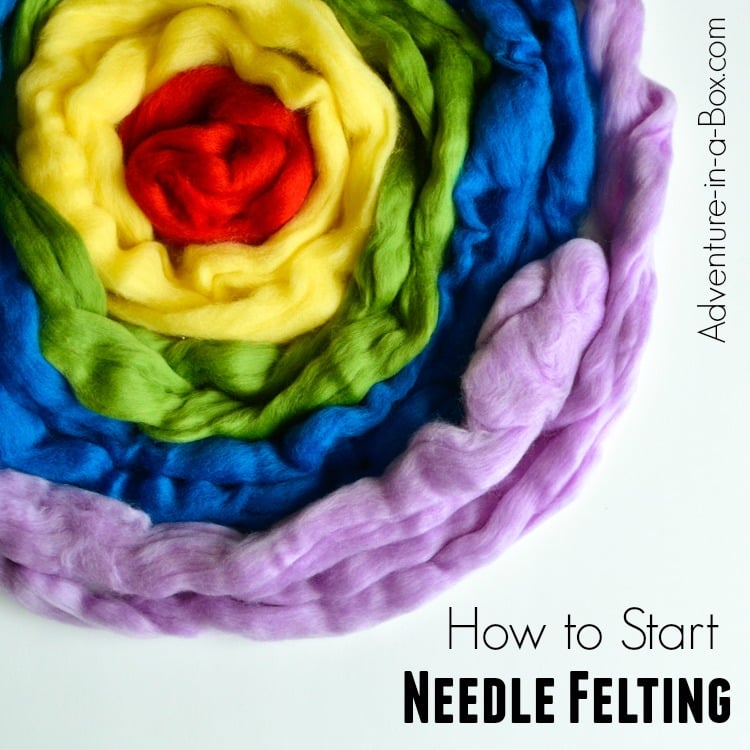