In the midst of the summer, there are few things that are better than a sweet succulent watermelon. And not only as a snack! Some make watermelons into a keg, and some carve it into a piece of art. We decided to make our watermelon into a ship. Well, after eating the delicious part out, anyway. 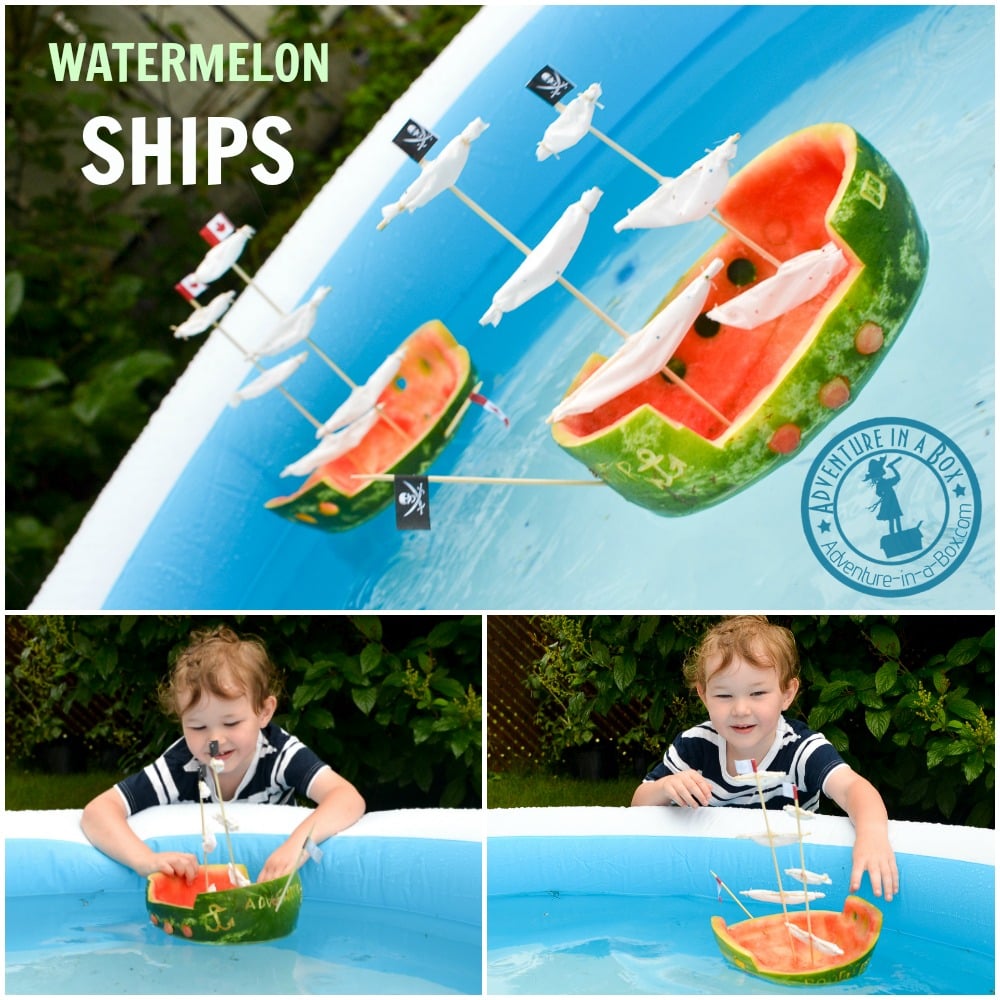 We like carving pumpkins in the fall. Turns out, carving a watermelon is just as much fun. Maybe it should become a new fashion, and we could keep watermelon lanterns on the front porch in July. On the other hand, the ants may like this decoration a little too much… But there is nothing preventing us from enjoying watermelon toys for an evening or two before the kids’ interest will wane and the rind can go in the compost bin. 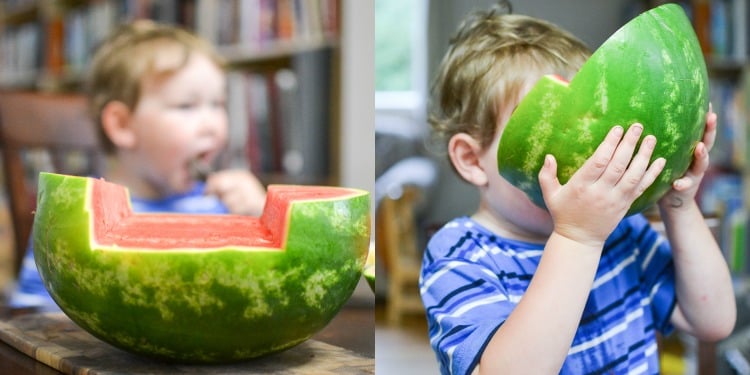 Next was the delicious part. We used knives and spoons to take the sweet red flesh out and enjoyed quite a bit of it in the process. We packed the rest in the container in the fridge to enjoy later, but there was still a fair bit of juice left. Budster volunteered to drink it. He loves drinking from unusual containers! He’d probably never touch watermelon juice from a cup.

At first, we thought we’d use one half for making the hull of the ship, and the rest for making sails and other accessories. But Budster claimed the other half for his very own ship. The form was a little unusual, but he couldn’t care less and worked away on it proudly alongside his dad. For making cannons ports, Budster used the tip of a potato peeler, and Jeffrey brought out a piece of galvanized steel tube to use as a punch. 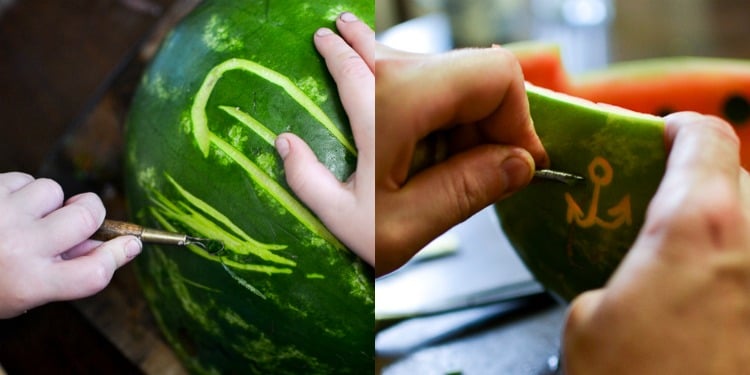 Carving was the fun part. Budster (on the left) got his own little tool. The scorp you see is actually used for carving clay, so it isn’t sharp, and our three-year-old felt very proud of his decorating. Jeffrey (on the right) had more suitable woodcarving tools. Anyway, whatever works for pumpkins should work for watermelons!

That’s when we named the ships and carved the names in. Jeffrey and I chose “Adventure” as the name for the bigger ship. It was inspired by the book “The Finn Family Moomintroll” that we all love so much. Budster christened his ship “Poodle-Noodle”. It didn’t fit, so we shortened it to “Poodler”. 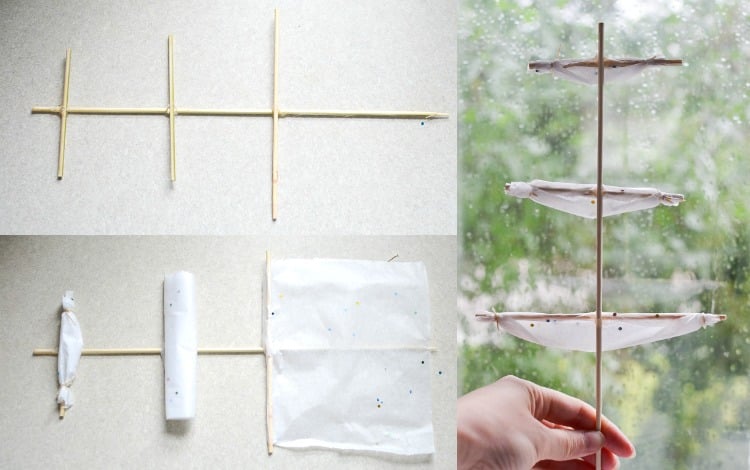 The masts and yards are made of bamboo skewers hot glued together. Tissue paper became sails. Bottom left picture shows how we made them: first, glue tissue paper to a yard, then roll it up and fix it like that with a bit more glue. Tie the ends with thread. We used white glue for making sails so as not to burn fingers.

Last, we printed little flags and attached them to the ships. Budster asked for a Canadian flag, and I made a pirate flag for our ship. “Adventure” is for good pirates and adventurers, of course… but they are pirates, nevertheless! 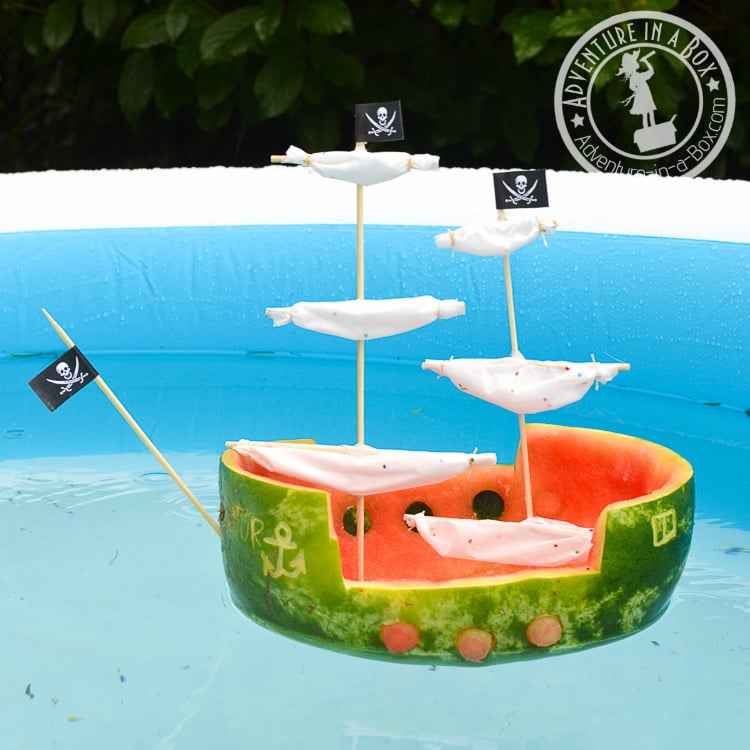 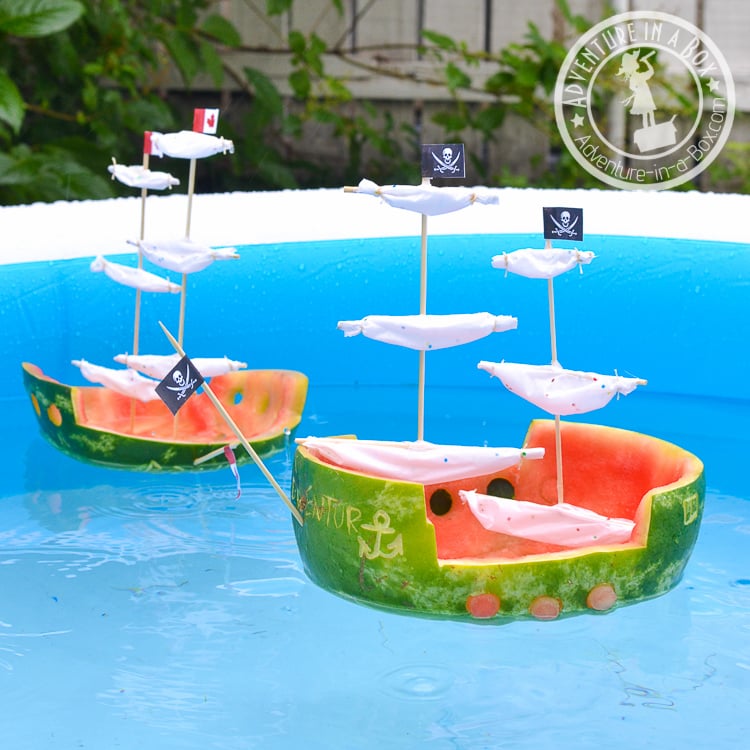 We took our ships for a swim in the pool and send them from one side to another, bumping into each other. Budster loaded the ships with passengers and machinery.

We really liked how much they could hold, and Budster loves playing with big toys outside after a variety of small worlds we do in the winter. Of course, if we didn’t have a little pool, he could just as much enjoy it in a bathtub. 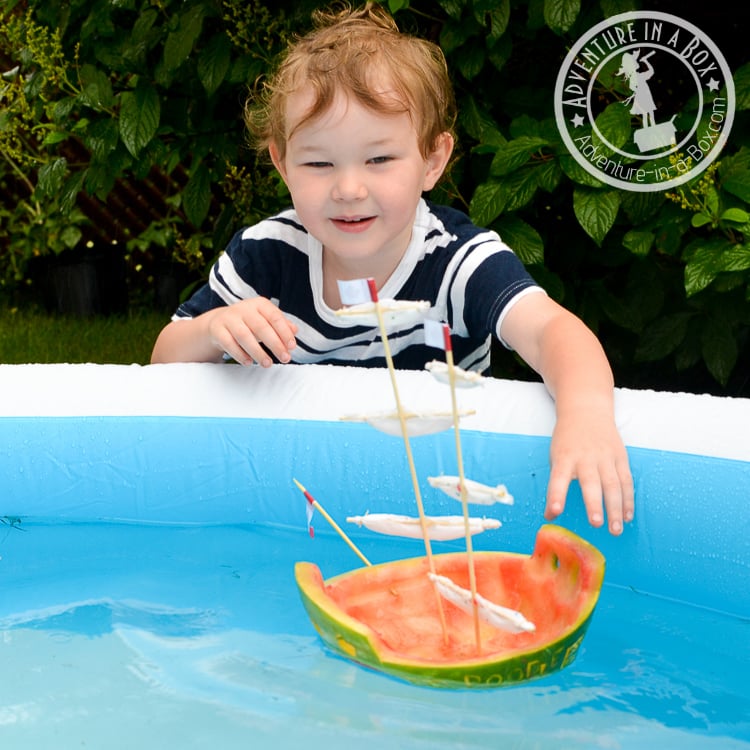 In the past, a watermelon rind always filled our compost bin right up. Something tells me it that from now on it may not always be the case. Personally I’ve been browsing The Floatys for other pool side inspirations. Budster is full of plans for what we’re going to build next. His top choices are a car, an airplane and a bear. Daddy wouldn’t mind making a helmet, out of professional ambition.