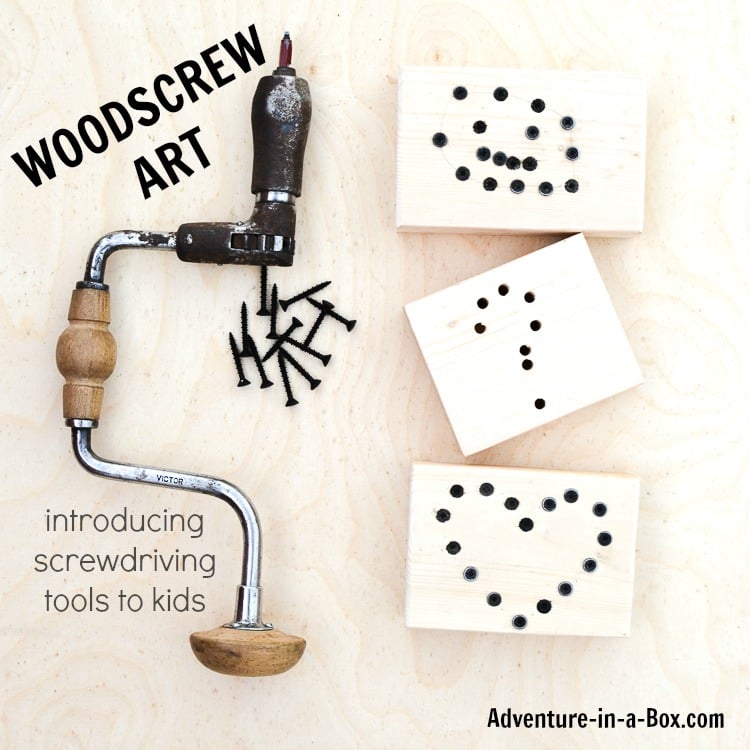 At three months old, Anselm preferred his wooden hammer over his other toys. By twelve months, he had acquired five different hammers, and he has loved tools ever since. Whenever Jeffrey was fixing something around the house, Budster could be seen squatting next to him and examining various wrenches, screwdrivers and drill bits. We were very encouraging in his interest, even if it sometimes meant that dad’s eyes were twitching as he watched Budster scattering his sockets around. He became more attentive and responsible as he grew older, and Jeffrey started explaining to him how each tool works. A new wave of excitement! His parents were excited too, having someone to help assemble the IKEA furniture.

Still, I was slightly alarmed when I saw Budster fighting with a roaring electric drill. Jeffrey was close by and assured me that Budster knew what he was doing and would be just fine. Besides, he was not using a sharp drill bit but a dull screwdriver bit. Budster was very happy with this new level of trust, and for two evenings he ran around the workshop, pretending to fix everything with the drill.

When he began using the drill, he had difficulty positioning it against the screws properly. Eventually he got better at fixing the tip of the bit right against the top of the screw, and that’s when he was ready to try working it for real. We decided to break this skill into a few easy and fun steps for him. 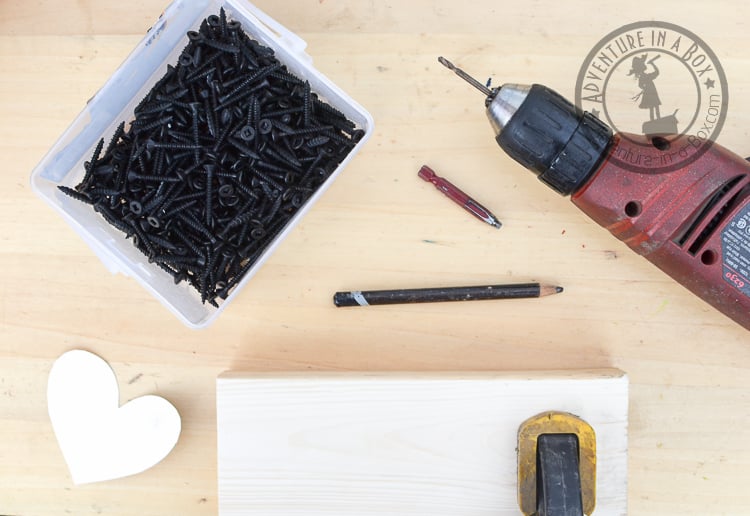 I salvaged a few scraps of construction grade spruce 2″x4″ boards left from a renovation project and destined for the workshop woodstove. For screws, I chose Robertson square-drive – they may not be as readily available outside of Canada, but they are by far the easiest type to drive and the only ones dad buys. I pre-drilled the holes for my little handyman slightly larger than would be ideal, in order to reduce the friction and therefore the required torque. This is how the invitation to play – that is, to drive – ended up looking. 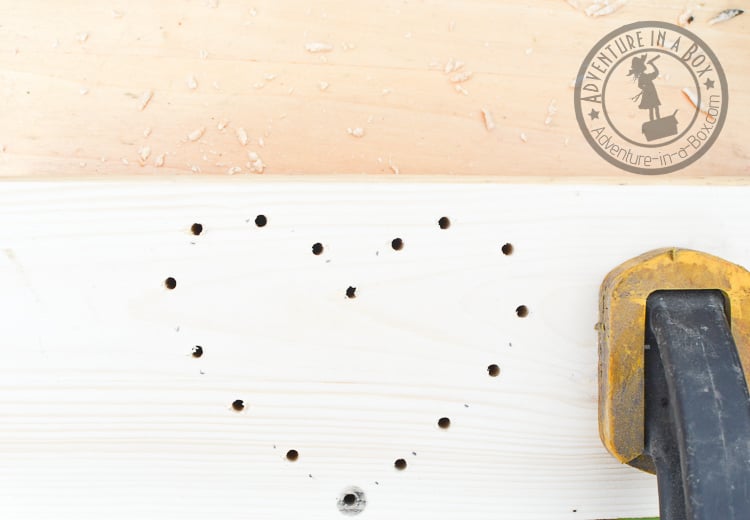 Anselm couldn’t wait to start. So we secured the piece of wood with a clamp, and away he went – driving one screw after another into place. 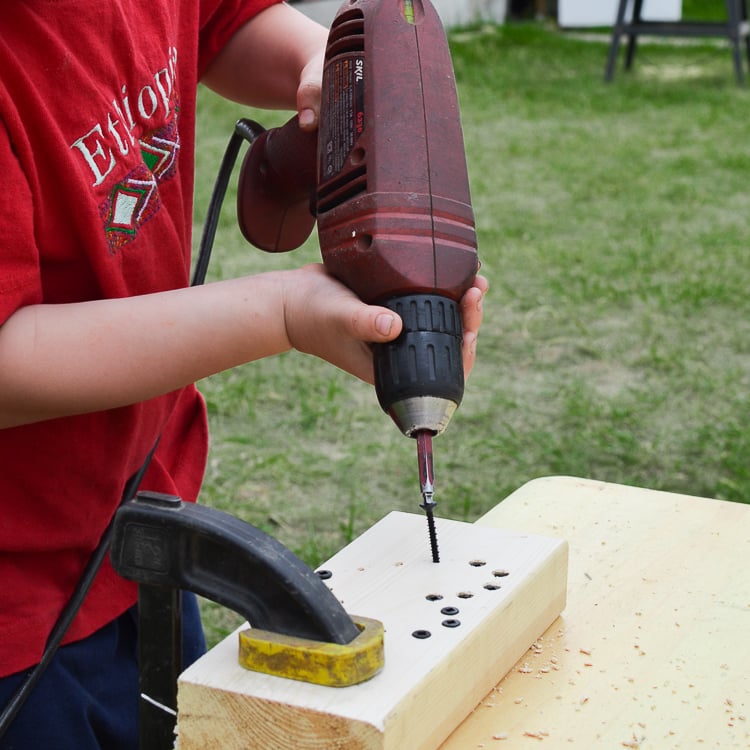 …Or maybe not. It turned out that repeatedly lifting the drill above the screws was too tiring for a three-year-old boy after all, even a strong one. After about three screws, Anselm was losing precision.

Fortunately, Daddy was quick to help.

Does Anselm want to try a brace? 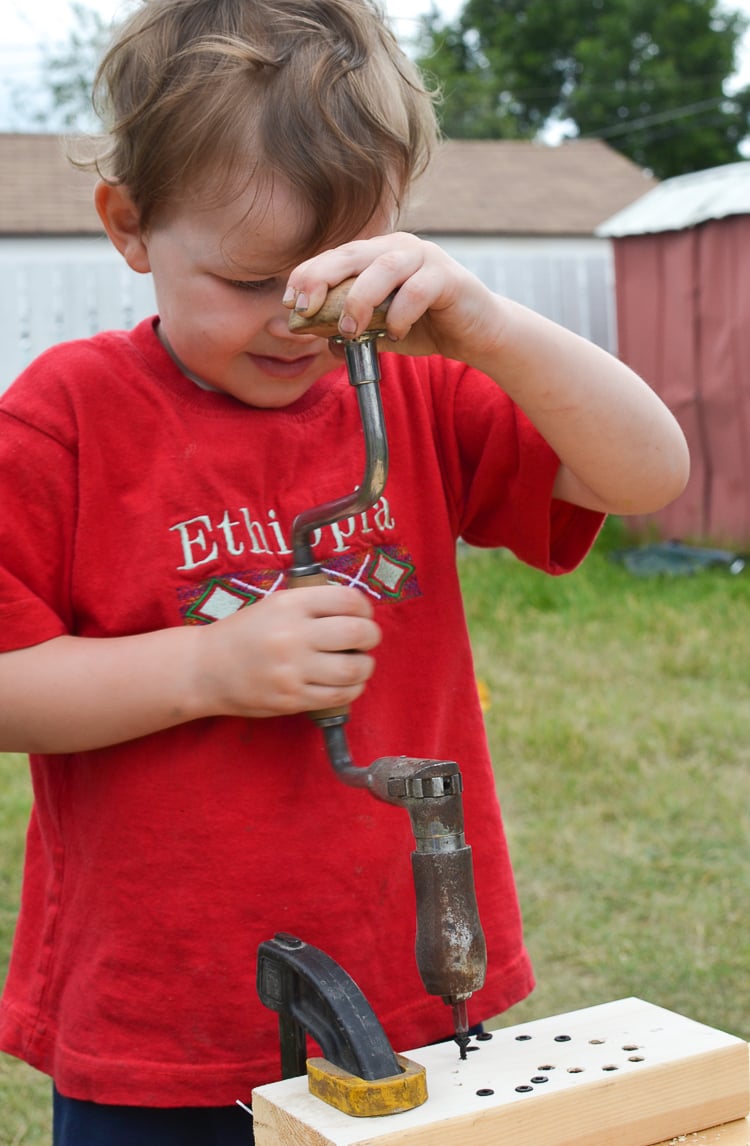 Or an eggbeater drill? 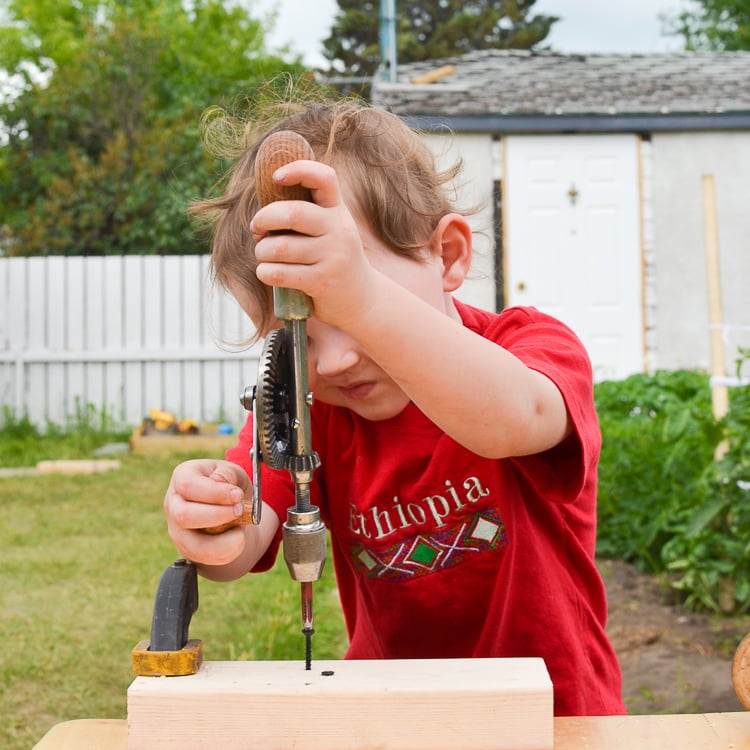 Both of them were a lot lighter, and Anselm, who likes trying new tools so much, kept working with renewed inspiration.

When he was finished with the heart design, he asked to make another one, and this time he was insistent he was going to “do it by himself”. He made the design with a pencil, and I drilled holes about half an inch apart from each other, all around it. 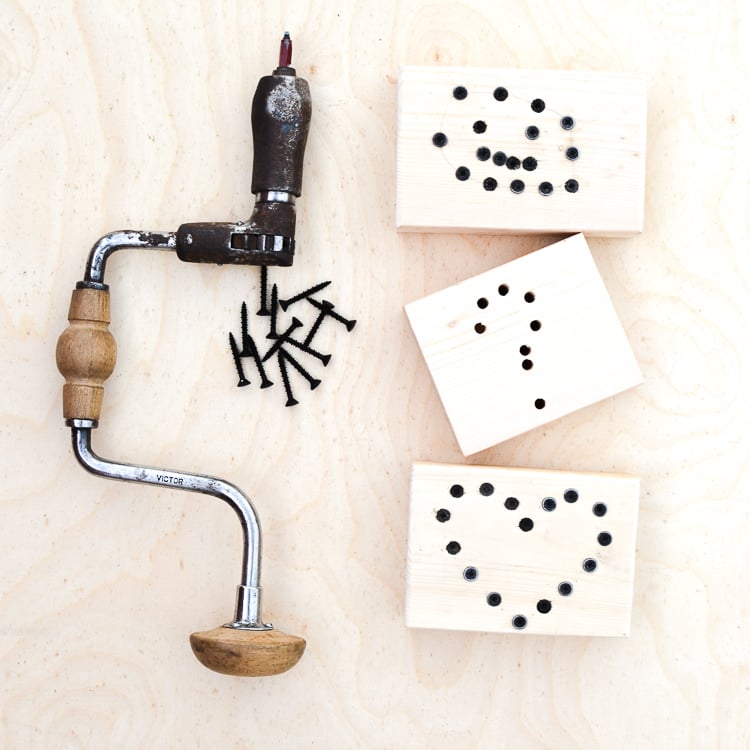 This face is so familiar to us from all of Budster’s drawings. It’s funny to see it made out of screws!

And while Budster was working on his screw art, I drilled a few more designs for later. Then in the future he can work his drill whenever he likes.