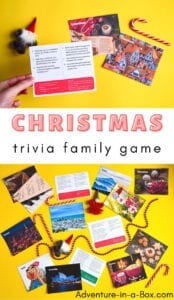 Christmas Trivia for kids is a fun printable game that challenges players to a battle of wits with 144 questions and answers. Enjoy the season and learn together!

Where did the trend of decorating Christmas trees originate? Why were candy canes invented?  Which carol inspired the impromptu Christmas truce during World War I?

This is a game of fun facts and trivia about one of the most beloved holidays in the world—Christmas!

With a focus on celebrations throughout history and around the world, the Christmas Trivia game will give you a completely new perspective on a familiar holiday.

What would you not see on an Italian table on Christmas Eve? What kind of presents are traditionally exchanged in Iceland? Which restaurant do people in Japan frequent for Christmas?

The game is not just about Christmas either! Since it is hardly ever celebrated for one day only, this game is also about all the other holidays that create a month of festivities that happen in different countries.

Get ready to find out why children polish their shoes before Saint Nicholas Day (December 6) in Germany and what kind of buns they bake on Saint Lucia Day (December 13) in Sweden.

Christmas Trivia for kids is great for making the holiday season a part of your educational focus, while also talking about history, geography and cultural diversity. My kids love trivia games! They either have a confidence boost when they answer correctly, or they learn something new. The fact that we play along with them and also don’t get everything right only makes it more fun.

The printable Christmas Trivia game packs nicely into a stack of cards that you can easily take along if you are going somewhere, like on a long drive. You can also tie it with a string and slip it into a stocking as a Christmas present. I’m planning to share a few with friends this year. After all, it is easy to print more copies!

The Christmas Trivia for kids includes:

Some questions you may be wondering about…

Will this game spoil the Santa Claus secret for the kids?

This material presents the traditions in different cultures without much examination of the belief systems behind them. Some traditions have Christian roots (nativity scenes in Spain, posada in Mexico), while others have pagan (yule goats in Sweden) or secular origins (jolabokaflod in Iceland).

Is this game only about Christmas?

While most questions are related to Christmas, this game is about all kinds of winter holidays around the world (Saint Nicholas Day, Saint Lucia Day, Christmas, New Year, Epiphany, Hanukkah, Kwanzaa).

How to Play Christmas Trivia for Kids

Print 26 double-sided trivia cards and cut them out.

Each card of Christmas Trivia for kids comes with six questions – three easy and three hard. Players can choose whether they want to answer an easy or a hard question. The easy questions come with multiple-choice answers and are worth one point; the hard questions are open-ended and are worth two points. Rolling the die determines which of the three questions of that difficulty gets asked.

The player is being read the question by the player on their right. When playing with beginning readers, a parent or a teacher can read all the questions. In case the reading adults also want to play and score, it is easy for them to cover the answer at the bottom of the card.

If the player answers the question correctly, they get the card and keep it. If not, the card goes back to the bottom of the pile, so someone else will have to answer it in the future.

The game ends when all the cards are gone, and the player with the most points wins.

Get Christmas Trivia for Kids!

Play a Christmas Guess Who Game of festive deduction, while learning about twenty regional Christmas characters and Christmas traditions around the world!

Engage in festive writing while using one of 10 free Christmas writing prompts for kids. Use a Santa letter writing template, play a Christmas would-you-rather game on paper, write a holiday acrostic, and more!