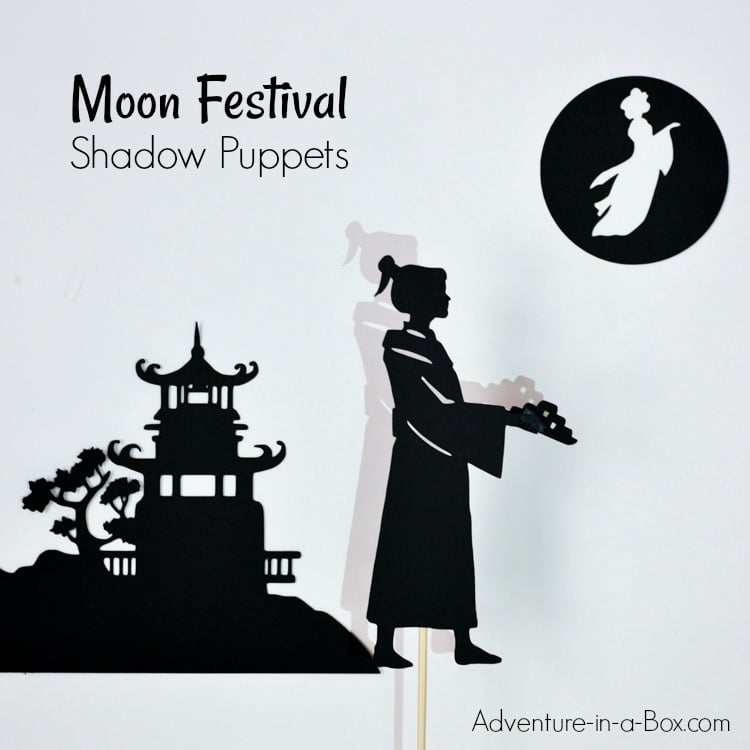 Falling on the 15th day of the 8th month of the Chinese lunar calendar, the Mid-Autumn Festival happens in September or October when the moon is the biggest and the brightest. For a casual onlooker, it is associated with mooncakes, paper lanterns and fire dragon dances, but the actual sentiment of the festival is very touching. “May we share the beauty of the moon together, even if we are hundreds of miles apart,” says a romantic Chinese poem. People watch the moon and think about all the relatives and friends far away who would be doing the same.

But how did the festival start? Behind it, is a Chinese legend of Chang E, a loyal and loving wife who turned into a moon goddess. After I read it, I wanted my children to know it as well, and here we love to do our storytelling with shadow puppets. They’re easy to cut and use as simple props for the kids to learn stories and later reenact them on their own. 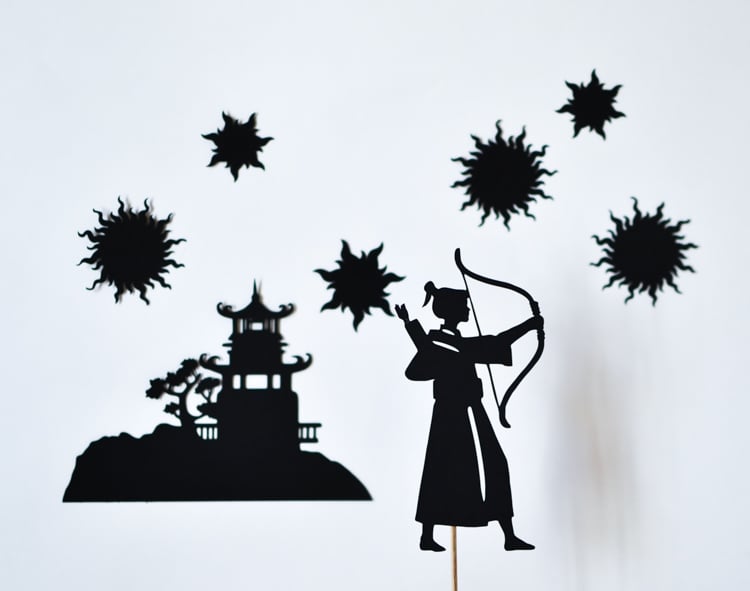 If you have always celebrated the moon festival, perhaps a shadow puppet show would be a pleasant addition to your annual tradition, as excited children wait for dusk to turn to dark. Or possibly, like us, you are simply enjoy exploring new traditions and bringing multicultural experiences to your family. Either way, we hope that the moon legend shadow puppets can bring some more magic to your Mid-Autumn festival!

Why Do We Celebrate Moon Festival?

Once upon a time, ten suns rose in the sky, scorching many crops and people to death. A brave man called Hou Yi came to rescue them: he excelled at archery and shot down nine of the suns. Only one sun was left in the sky to give people light and warmth. 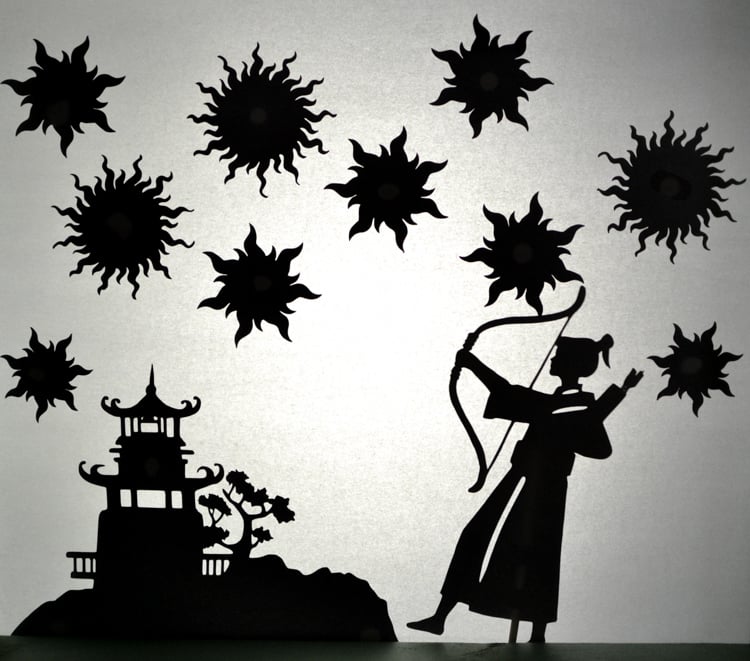 On hearing of this amazing feat, people came from far and wide to admire Yi. Among his admirers was Pang Meng, whom Yi accepted as his apprentice. 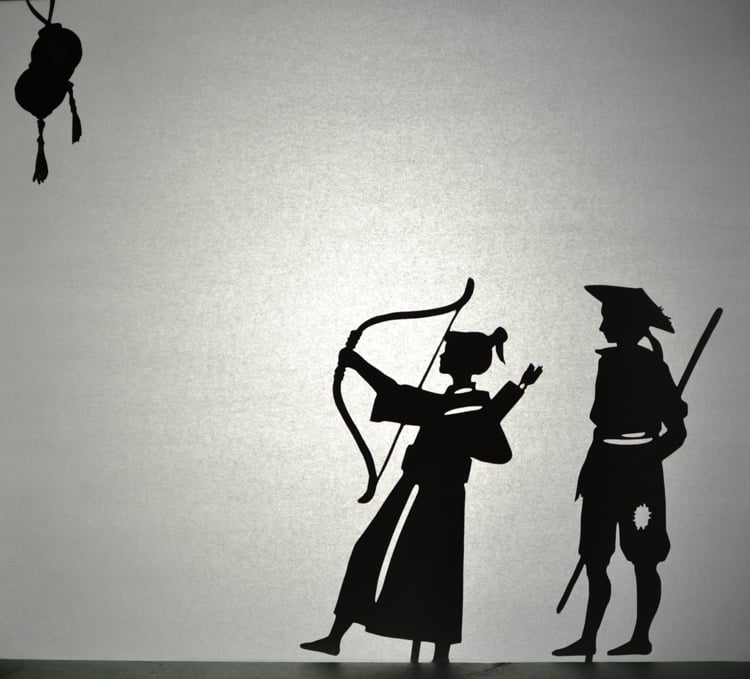 Even the immortals noticed Hou Yi. One day, the Queen of Heaven came down to earth. She told Yi that as a reward for his bravery, the gods would give him an elixir of immortality, so that he could drink it and join them in Heaven. 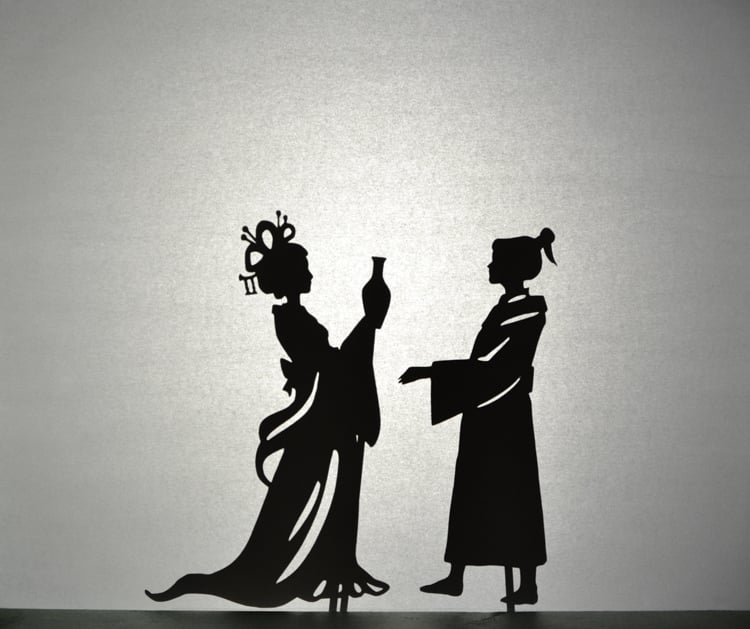 But Yi was married to a beautiful and kind woman, Chang E, who he dearly loved. He wanted to become immortal, but he wanted to spend his life with her more. So he gave the elixir to his wife and asked her to hide it away. But Pang Meng broke into Yi’s house while he was away, and demanded the elixir. Chang E couldn’t fight him, but she wouldn’t allow such a man to have the elixir. She drank it herself and immediately ascended into the skies. 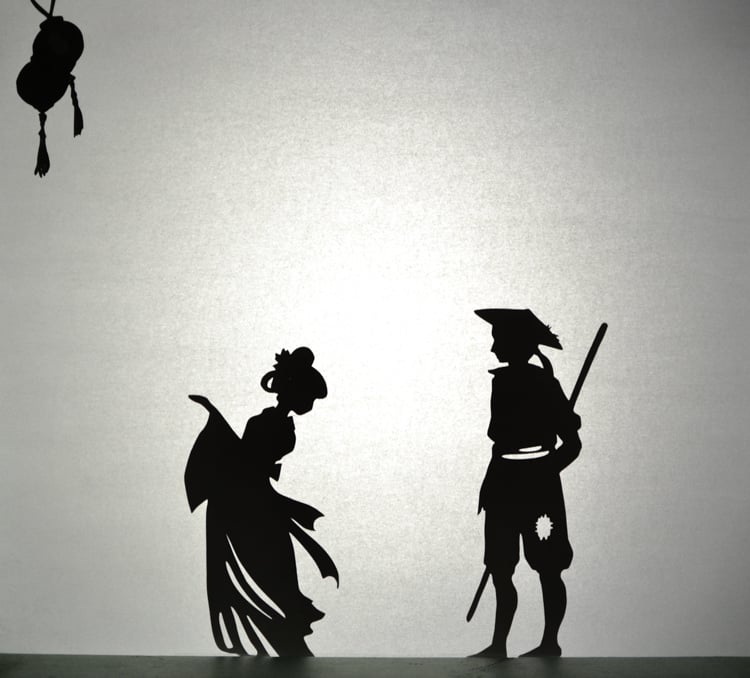 When Hou Yi didn’t find his wife at home, he went looking for her. The night was bright with the full moon rising high above him. Yi looked up and was amazed to see a figure which looked just like his wife appear on the moon! Chang E’s love for Hou Yi drew her towards the Moon, which was the nearest place to the earth in the heavens. Upon realizing what had happened, Hou Yi brought her favourite foods, cakes and fruit, out in the moonlight to share with his wife. On hearing the story, many people started participated in bringing their offerings to the moon. 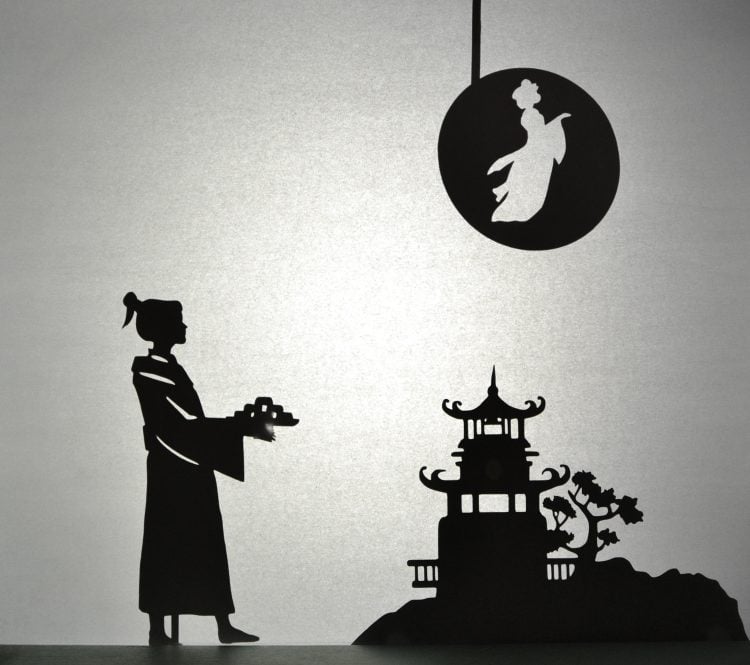 This is one of the origin myths of the Moon Festival.

There are a few more. One of them even has the same beginning and characters, but Hou Yi becomes a tyrannical king in that one. You could still stage that play with these shadow puppets as well, but for now we focused on the sad and romantic story of Hou Yi and Chang E,

What is the story of Chinese Moon Festival?

You can take a peek at our shadow puppet performance. No throwing tomatoes though! The script and design done by me, while the narration and the technical execution is by Jeffrey.

While passing an elixir from one character to another proved a little difficult for a solo puppeteer, I thought that shooting down the suns with a bamboo stick was executed amusingly. We have a handmade wooden theatre, and we stretched baking parchment across the opening. We have also recently completed a slightly bigger and much simpler cardboard puppet theatre. The decoration silhouettes, like the suns or the Chinese temple, can be attached with double-sided foam tape (some stick better, and some worse) or a bit of adhesive putty (which sticks pretty well).

How to Make Your Own Puppets

You will find detailed instructions on how to make shadow puppets here. In a nutshell,

1 — If you have a silhouette cutting machine (Silhouette or Cricut), you can import the designs and and have it cut in no time. Here are a couple of useful articles:

How to import a JPEG image in the Silhouette Studio

How to import a JPEG image in the Cricut Design Space

2 — There is still nothing wrong with cutting with scissors! I recommend printing the silhouettes on black paper. It’s a little more difficult to see the design than on white paper, but it’s not at all impossible, as you can see for yourself on the picture above. That way the puppets are black on both sides, and little discrepancies between the printed design and the actual cut will not show up.

My favourite tools for cutting are:

Get the designs & cut your own puppets

Buy the puppets already cut from our store!