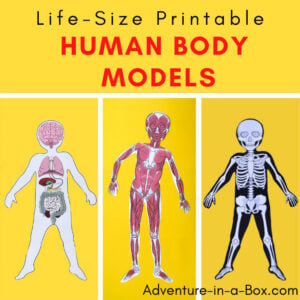 When teaching human body anatomy to children and discussing all the layers of systems that keep our bodies alive, it is paramount to have good illustrations: clear, detailed, and big.

Life-size printable body parts are great for introducing body systems to kids. They are big… well, they’re life-size, so they are as big as it gets. They are clear and anatomically correct but not so realistic that they may frighten anyone. And – best of all – they can give children an opportunity to build a model of how human bodies look inside. In truth, they can build models of their own bodies with these paper organs!

“This is your nose. This is your belly button,” we say to toddlers when giving them their first anatomy lesson. How great would it be to tell older kids, “This is your liver. This is your trachea.” And that’s what this project is excellent for! On the one hand, the paper human body model is life-size, so it creates a powerful visual attraction. On the other hand, it is highly personalized since all the paper organs attach to a silhouette created for a particular child.

The life-size anatomy model pack includes a reference booklet with basic information and fun facts on all the human body systems. Each page describes how a certain system works.

Another important feature of our printable body parts is that all the systems integrate together perfectly. It is especially noticeable if you layer skeletal and muscular systems onto each other. The two systems work so closely together that they are sometimes referred to as the musculoskeletal system. The corresponding printouts in our human body model pack showcase this connection – kids will be able to tell not just which muscles go where, but which bones they attach to, and how that makes their bodies move.

My children definitely loved making paper versions of themselves. The whole pack took us a few years to finish, so you will see that in some photos they are younger, and in others, they are considerably older.

You can get all the body systems here – or you can read about the individual printable body parts below.

When my oldest child was six and expressed an interest in studying anatomy, we started with anatomy books for kids. But as much as books were great (and they truly were – check out Human Body Theatre for the most comprehensive yet approachable explanation of how our bodies work!), my son at six was a very hands-on little guy. He wanted to handle things; ideally, he wanted to build things.

I thought of getting him a human body model, but the ones that were affordable and kid-friendly were small and primarily focused on the digestive system. Next, I considered making a bunch of organs from felt, but as much as it seemed like a fun project, I was not an efficient seamstress. Felt organs seemed like a time-consuming project either for me to make or for someone to repeat if I decided to share patterns on my website. But I could create printable body parts! Drawing organs would take less time than sewing, and printing them later would be a breeze.

That’s how the first life-size paper organs appeared. The printable paper organs I created could be used to form the digestive system, respiratory system, nervous system, urinary system, and circulatory system. There were the brain, lungs, heart, trachea, stomach, pancreas, liver, gallbladder, small intestine, large intestine, kidneys, urinary bladder, and some others. The pack included two versions of the organs – one had the identifying text written over them and the other was text-free.

The pack didn’t include a human body outline. Instead, it was possible to scale the organs to the outline of an average 5-8-year-old and make it based on a silhouette of one particular child.

It was my son studying anatomy back then, but he wanted to build the model of his sister, and she was excited to be the centre of attention as well.

Immediately after finishing the organs, I wanted to make a skeleton. Maybe it was because I was working on this in late September, and the spookiness of Halloween was already in the air. Maybe it was because skeletons seem to have a life of their own – you know, in movies or in Lego sets! My son had a certain interest in skeletons, both the skeleton he could feel through his skin and the toy ones he saw in stores.

All in all, a life-size printable skeleton just seemed to hit a great balance between an educational toy and a fun craft project.

It was indeed interesting, both to make and to use. We learned a lot about bones with our bony guy. Again, the outline was created based on my children, but this time we used black paper for tracing so that the bones would show up better.

Several years later, as my son grew and we returned to studying anatomy again, we thought that the additions to our life-size printable body parts were in order.

For instance, how much can bones do without muscles? Muscles attach to the bones and move them around, so we created a life-size muscular system to pair up with the life-size skeletal system. Because of their interconnectivity, they are studied best together with the muscles attaching to the bones and the bones showing through in some areas, most noticeably around the sternum.

Besides my son, I had a new helper who was very excited about this project. My daughter nicknamed our latest creation “the Muscle Man” and spent a long time assembling it.

By now, we had almost all the body systems covered, except three – the reproductive system, the immune system, and the endocrine system.

These three body systems are fairly complicated, so we purposefully left them out when we made those first printable body parts that we aimed at 5-7-year-olds. But as our kids grew and I got messages from educators with older students using our printable body parts, it seemed like an update was in order.

The life-size body models focus on the organs that form the reproductive systems, the immune system, and the endocrine system. They do not come as a separate pack, but they are included both in the Life-Size Human Body Paper Models and in the Anatomy: Advanced Bundle.

You can get all the printable body parts if you get the Life-Size Human Body Paper Models. Or you can get the systems individually: