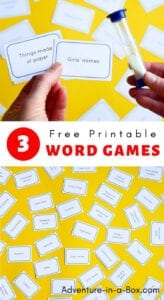 Use over 100 cards with family-friendly categories and play these three free printable word games. Fun for kids and adults!

Word games are among our family’s favourites. They’re fun and versatile. Different ages can participate, to the best of their abilities. And they can be played pretty much anywhere, at home or on the go.

Today, I’d like to share with you three of our favourite printable word games. All of them are based on the concept of categories. In one of the games, players need to name five words that fit into a category before the timer goes off, and in another, they want to be last to suggest an acceptable answer.

All in all, there are 108 categories, enough for many repeat games! All of them are purposefully family-friendly, revolving around the subjects that children know – “boys’ names”, “animals on the farm”, “things in the sky”. There are also blank cards for adding your own categories.

Initially, I made the categories with my then six-year-old in mind, so I would tentatively rate the game as 6+. I believe that younger children can also join on the fun sometimes, especially if you adjust the rules.

All of the games include the usage of a timer. You can use one on your phone or on-line. If you have board games in the house, you can scavenge a timer from one of them. Adjusting the timer will make it possible for younger and older children to play together if you give a little more time to the youngest and a little less to the oldest for the same chance to win.

You will find the free printable file with rules and categories below.

What Printable Word Games Are Included?

Best for: 2-15 players (when playing with more than 2, divide into teams)

One team draws a card and reads the “Name 5” challenge topic. The team then flips the timer and has a certain time limit to name five things that fit the category on the card. The other team acts as judges and can object to certain answers. If the team can successfully fulfill the challenge and name five things, they keep the card.

Next, the other team does the same. The team that has collected five cards first wins.

One player draws a card and reads a challenge topic. The player needs to name 3 things that fulfill the question on the card within 5 seconds. If the player can do it, they keep the card. Each player takes two turns in a row, before it is the next players turn.

First, players decide on a letter.  They can use a random letter generator, go through the alphabet, use the first letters in the players’ names, or select a letter in any other random way.

Next, one player picks up a category card and reads it out loud. Another player starts a random timer (random timer doesn’t go off after a set time, but rather has a certain range, for instance, 5-30 seconds for this game). Players don’t know how much time they have got—it may be 5 seconds, 20 seconds, or 30 seconds. They rush to offer their ideas for the category that starts with the chosen letter, hoping that theirs will be the last word before the timer goes off. The player with the last suggestion before the timer goes off wins the round and gets the card.

The player who collects five cards wins the game.

Use Earth trivia questions and learn more about our amazing planet, while playing this printable educational game for kids!

You can also try:

Printable Pictionary by The Game Gal