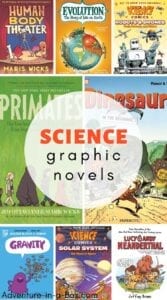 Science graphic novels are a great way for kids and adults to combine educational and enjoyable reading into one!

It used to be a common belief that comic books don’t deserve attention from a serious reader. Nothing can be further from truth with these science comic books!

Now, how many children are curious about, say, Neanderthals? Or the life of bees? Some. But those topics are definitely not for everyone. However, many kids like comic books, because they are full of pictures and witty dialogues, so they will happily read one. If it happens to be about Neanderthals or bees, so be it – they will learn about that at the same time! Believe it or not, my six-year-old became fascinated with genetics, while we were reading science comics.

No wonder science-themed graphic novels have been gaining such popularity in educational circles. There are educational comics books that can teach you how to draw and how to fix a car, graphic novel biographies, myths and legends in comic books. There is also a big selection of comic books on science topics, and we would like to share our favourites with you!

Science comics have become so popular that First Second, a popular publisher of comic books, have created an entire series of them. They add a few new titles every year. Currently, there are comic books about various animals (dogs, cats, dinosaurs, polar bears, bats, and sharks), about the science behind machines (airplanes, rockets, cars, and robots), natural phenomenon (volcanoes, weather, rocks and minerals), and some other subjects.

Inside, the science comics often touch on some unexpectedly deep subjects. It was while reading about dogs that my son and I learned about the basics of genetics!

We have included several of our favourites from that series in the list, but there aren’t any of them we wouldn’t recommend.

Below are two of our favourite science graphic novels. 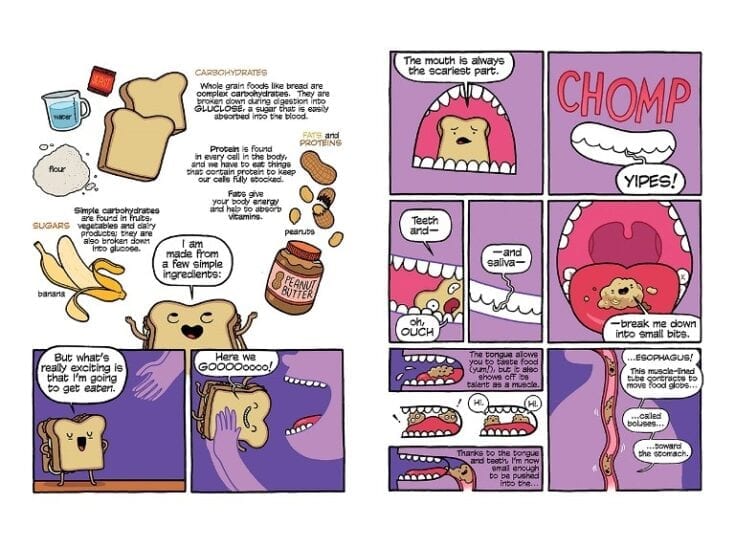 Tonight the human body itself is putting on a show! The charming master of ceremonies starts as a skeleton, but as the evening progresses, right in front of your very own eyes, it will put on the rest of the body layers - muscles, organs, skin, and so on.

By turns, hilarious and intensely informative, it is a rare book that achieves a high standard both in educational and entertaining components. I mean, how often do you laugh while reading a textbook? You will if you go with this one. 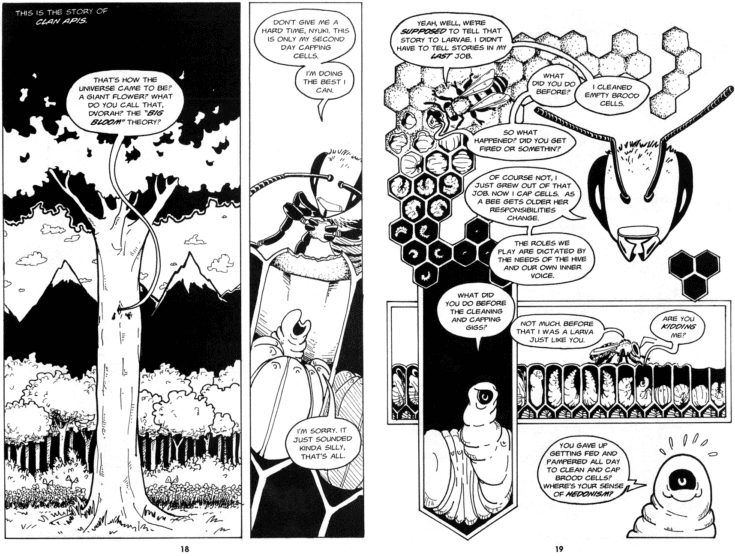 Did some laughing with Human Body Theatre? Now, prepare to shed a tear or two. Clan Apis is an amazingly educational, yet very relatable story about the life of honey bees. It will make you laugh and cry, and you will never be able to think about bees the same.

While being very realistic about the details of bee life, the author Jay Hosler gave charming personalities to the characters, so we couldn’t help but fall in love with the spunky bee Nyuki or her sensible older sister Dvorah. When I say we, I mean our whole family, from my six-year-old son to my late-thirties husband.

The titles below are also delightful! In this article, we tried to collect those science comic books that would be appropriate for children (both in excluding mature subjects and in the accessible presentation of complex ideas). But it doesn't mean that they're only for children! Adults and teenagers will find most of them enjoyable and educational as well. 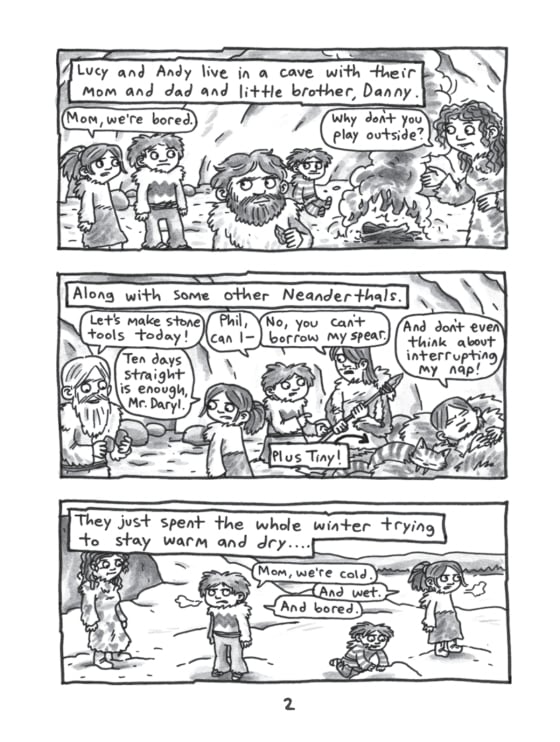 What would life be like if you lived in the Stone Age? This comic book provides children with a very detailed answer that features some insight into stone tool making, mammoth hunting and cave wall painting!

Slice-of-Stone-age-life stories are interspersed with dialogues of two scientists that explain which parts of the story are known facts and which are fictional, as long as what methods scientists use to study culture that existed tens-of-thousands of years ago.

This series of comic books turned out to be quite a gem. Neither me nor my son knew (or cared to know) anything about Neanderthals before, yet we simply devoured the stories and learned a lot about day-to-day life in the Stone Age. Better yet, it was fun to read, and we grew to quite like the characters - the brother and sister Andy and Lucy, their family and neighbours. 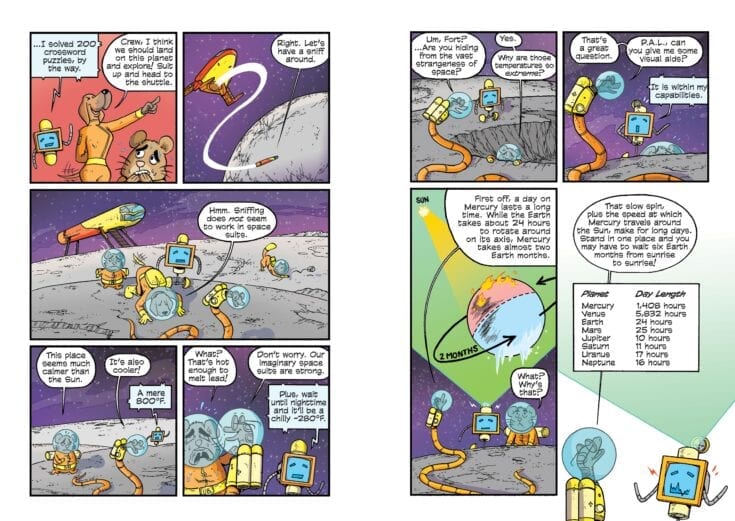 Solar System: Our Place in Space

Do you want to go on an exploration of the solar system? Easy! First, you build an imaginary spaceship, next, select an imaginary crew, and in no time, you're ready for take-off!

While the trip is imaginary, all the facts about the solar system in this book are vivid and real. This comic book will give a great overview of the solar system - what the temperatures are like on Mercury and how Jupiter compares to a basketball - to any kids with a budding interest in astronomy.

What do worms do all day? How do they see? And why are they so cold and squishy? This comic book takes readers from "ew!" to "wow!" as they learn about the different ways worms work hard to help the Earth.

In addition to being a science comic book, this is also an early reader comic book! And the author of this book has a series of them - The Real Poop on Pigeons, Snails Are Just My Speed, and Ants Don't Wear Pants. 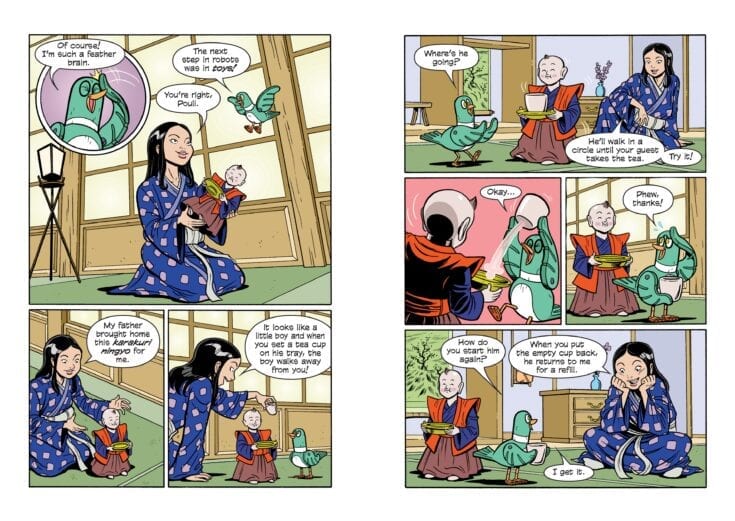 Robots and Drones: Past, Present, and Future

From tea-serving robots in feudal Japan to modern rovers exploring Mars, robots have been fascinating human's imagination for a long time. And nowadays, for better or for worse, they are entering our life on an everyday basis, exploring, cleaning and providing information! Isn't that one good reason to learn more about robots?

In this exploration of robot history, children will learn what the first robots were like, how they are helping humanity in modern times, and what robotic innovations can be expected in the near future. 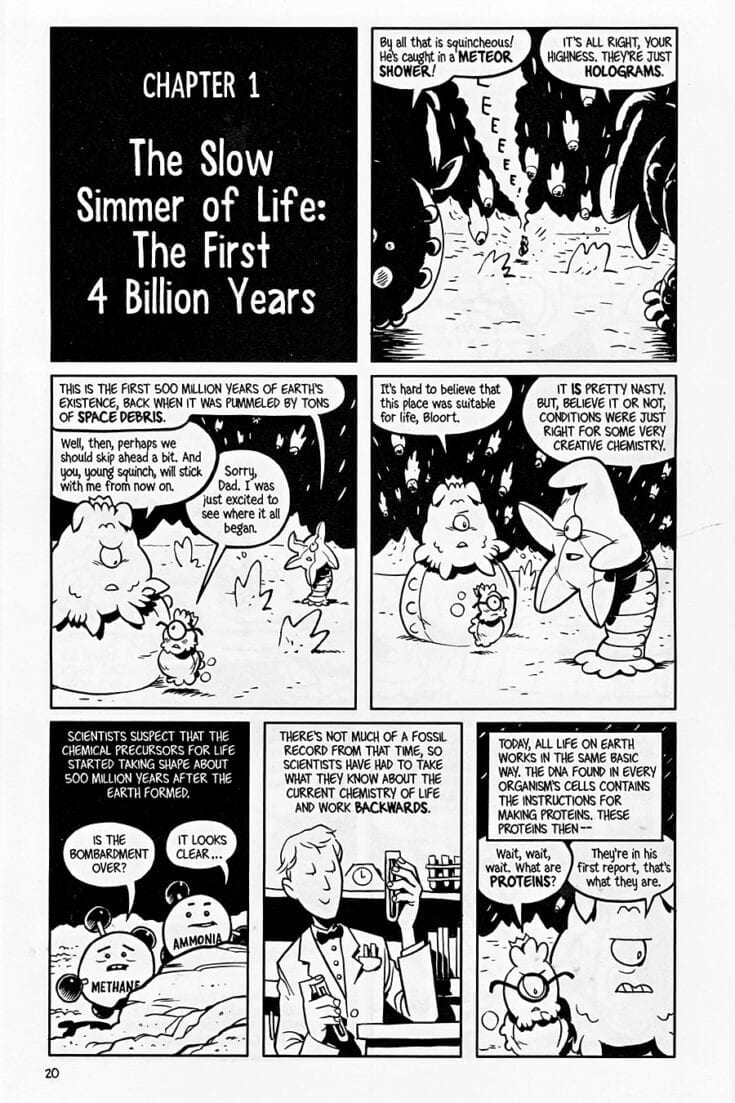 Evolution: The Story of Life on Earth

When do most students study evolution? Around high school. Not with this book! We read it to our son when he was six, and he enjoyed it for several evenings in a row. The theory of evolution is presented in a very accessible form, as an alien scientist makes a report on the life on Earth to an alien king (not very bright) and his son (very smart). As a result, it is a perfect mix of jokes, witty dialogues, and scientific facts and theories - about how life on diversified. 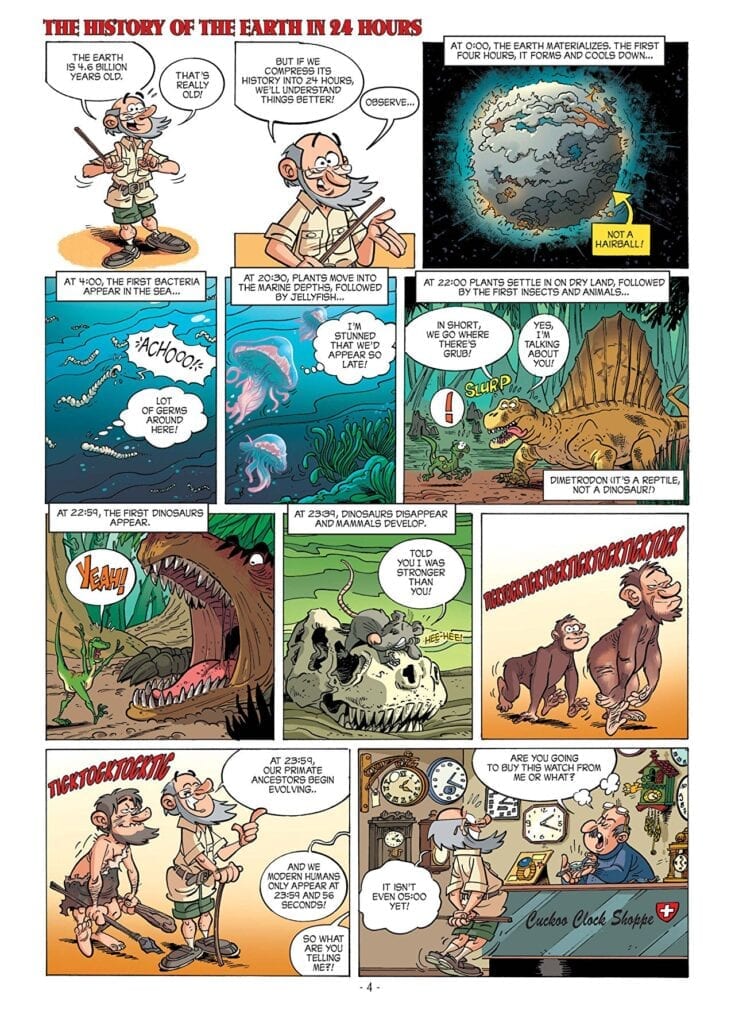 In this series of books, dinosaurs demonstrate what their life was like in a sequence of short, funny, teeth-gnashing stories. It is a little on the violent side, portraying the relationships of predators and prey, but it does supply dinosaur fans with a lot of scientific facts! 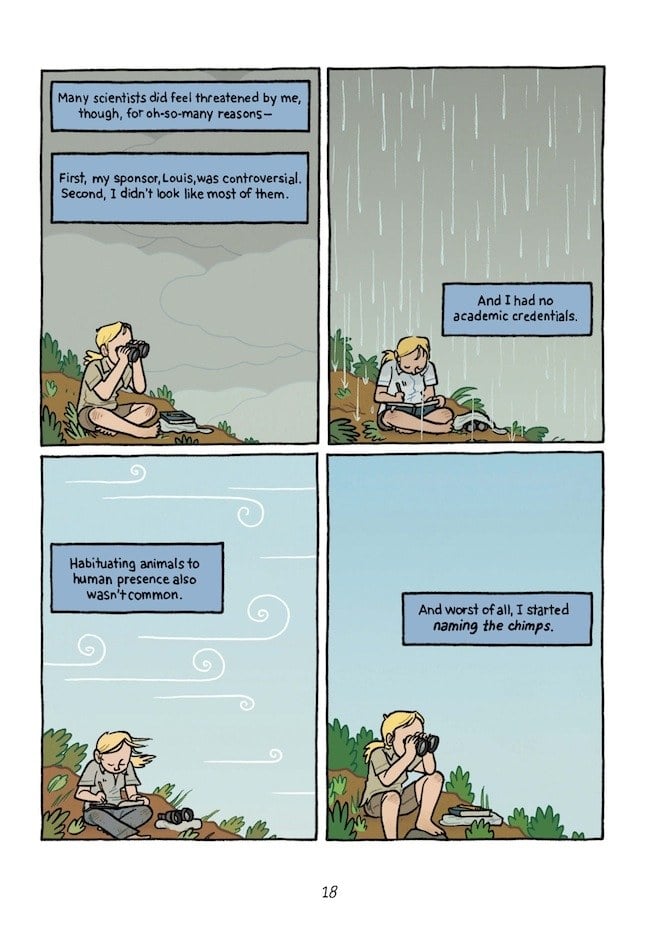 Turning to three remarkable primatologists of the last century and covering the highlights of their careers, this graphic novel is an entertaining and informative look at the field of primatology, the scientific methods it used in the twentieth century and the discoveries it made.

While the graphic novel focuses on the uplifting and inspiring parts of these outstanding women's stories, it does allude to some darker subjects as well, such as death, divorce, sexual harassment, and that's why the recommended age may be higher than the overall presentation of the book requires. 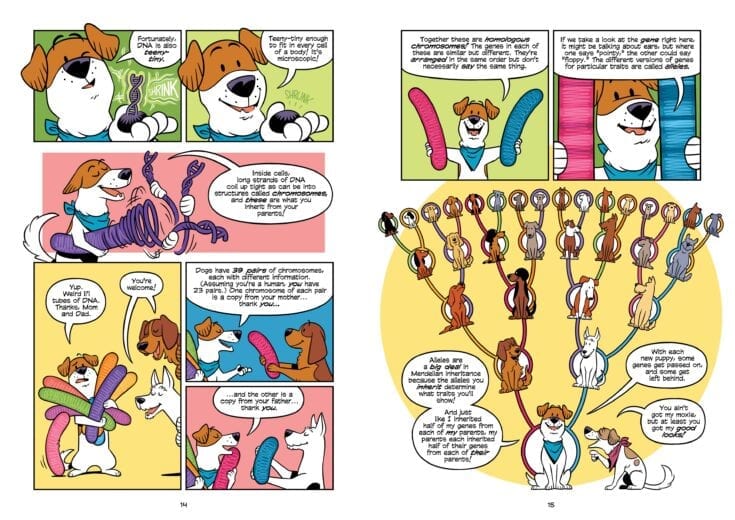 Dogs: From Predator to Protector

Do you have a dog lover on your hands? With this comic book, they can learn all they may want to know about our canine companions - how good their smell is, which colours they see and don't see, and what kind of jobs they can be trained to do. Unexpectedly, this book also went into great detail explaining the basics of genetics, which, to my surprise, my son found fascinating.

Do you have a cat lover? Try Cats: Nature & Nurture instead! 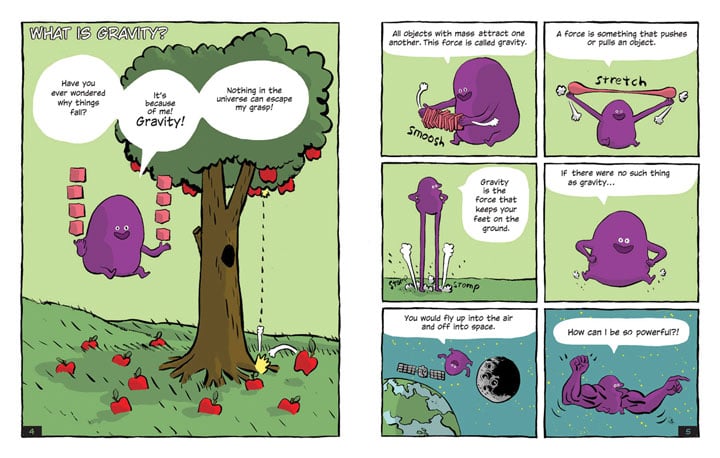 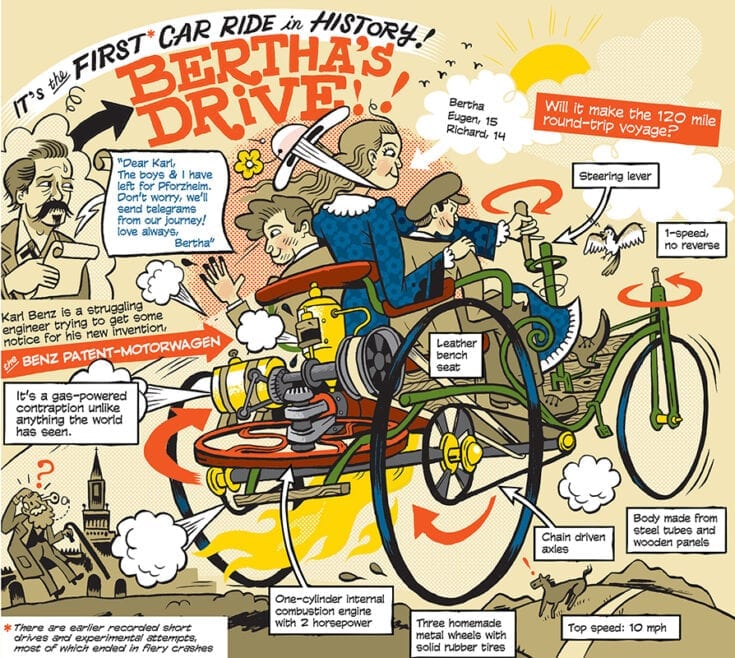 Cars: Engines That Move You

Another common fascinating of children gets a very thorough exploration in this graphic novel, as the readers learn about the history of cars and different ways to get an engine moving. Steam? Gasoline? Electricity? This book explains it all!

Have a beginning reader? Early reader comic books are fun and easy to read!

Beside comic books, we also love audiobooks, and here is the selection of our 50 favourite audiobooks that children and adults can enjoy together!

Match male and female bird with this printable game.