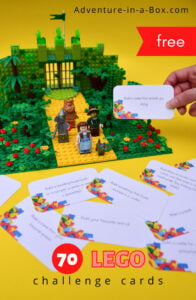 A few weeks ago, we watched “Lego Masters“. If you haven’t heard of it before, it’s a TV series that features a bunch of competitions in Lego building. Each episode has one or two building challenges, with contestants trying to outbuild each other. Some of them have to do more with speed; others focus on creativity, and yet others are more about engineering or strategic planning.

Our kids enjoyed the show, and we did too. Another benefit of watching it was that it renewed their interest in building! When we had guests over, my son suggested having a competition, and they all built little animals with a 15-minute timer. They had fun, and it was interesting to see what they came up with.

Come to think of it, it was the first time our kids went to play with their bricks in quite a while…

We have a marvellous Lego collection since both my husband and I have great respect for it as a toy. Unfortunately, it doesn’t get played with as often as it should. Normally, we are all up for open-ended play, but seeing how a show with Lego building challenges inspired my kids to play with it more than usual, I wondered if the open-endedness of it may sometimes be just… too much?

I know it can be the case with drawing; that’s why over the years I’ve created some general lists of drawing ideas for kids, as well as more specific drawing prompts. Sometimes deciding what to create is half the job. A list of creative prompts get the job started!

That’s how the box of printable challenges became a new addition to our Lego table.

If you are wondering where the box came from, it is actually an Ikea x Lego BYGGLEK box. I got the smallest one. The kids like decorating them and using them as little treasure chests.

The introduction of Lego challenge cards definitely prompted a resurgence of interest in building with bricks. I finally built a scene from the Wizard of Oz. Ever since we got the cute minifigures of all the main characters, I’ve been itching to build a scene from the book.

My son chose the car that would fit a minifigure as his first Lego building challenge and the spaceship as his second one. He later built a ramp, which was another challenge, and raced cars together with my daughter. He said he liked many of the challenges and wants to build them all! I think we may have to add a challenge-focused afternoon to our weekly homeschooling routine this year.

My husband was not far behind. He would like to build a full-scale vardo one day; for now, he made a vardo.

Inside the free PDF of Lego building challenges, you will find:

There is an element of surprise with drawing one of the Lego challenge cards, but sometimes it is handy to have a simple list of ideas, which is why I made these pages as well.

There is a great variety of building challenges on these cards.

Some are simple and can be completed within 10 minutes; some can be completed in a short time, but if children work on them for longer, they will create something more impressive; a few of the challenges need a fair bit of time.

Many of the challenges involve straightforward building, but some encourage incorporating Lego into other activities. For instance, there is a challenge to create a photo story about a minifigure, as well as a challenge to make a picture frame from Lego.

Here are examples of some Lego building challenges in the pack.

There are also blank cards included for making your own challenges!

Get the Free Lego Building Challenges!

Other Lego Projects to Try

For more Lego building challenges, check out these printable cards:

Don’t know what to draw? Try one of our free printable drawing prompts for kids, a fun exercise in creativity!

Engage in writing while using one of 70 creative writing prompts for kids that describe interesting techniques and offer captivating scenarios!

Thanks for reading! If you are on Instagram, tag me @adventureinabox to show what your children came up with.