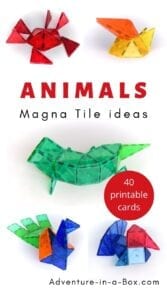 Combine the study of animals with engineering by using these printable magna tile idea cards and inspiring young builders to create 40 animal designs from magnetic tiles!

In order to make a connection with a new topic of study, it sometimes helps to tie it in with an interest that your children already have.

When my son was studying the alphabet, we used LEGO alphabet cards and Magna-Tile letter cards. And lately, we have been creating animal projects – animals from pattern blocks and LEGO habitats. And this Animal Magna Tile Cards is our latest addition to the animal unit study for engineers.

There are two main ways to look at the printable cards.

One, the cards act as puzzles, like tangrams, to figure out and build. Each card presents a good enough view of the model for children to be able to figure out how it was constructed, however, it requires some thinking and engineering skills to build a copy of it. It also naturally involves the math skills of recognizing the shapes and counting the pieces out.

Two, the cards act as inspiration for future builds. After seeing how the animals on the cards are built, children can try to build other animals, using the same principles or by inventing new techniques. For instance, we figured out that standing tiles up works well for representing insect legs, and clear tiles make excellent wings.

· all new designs that do not repeat our previous packs

Get All the Animal Magna Tile Cards!

From a cute arctic fox prowling the Arctic tundra to a mighty elephant lumbering over the African savanna, the LEGO habitat project showcases some of the world’s most interesting animals and describes how they adapt to their surroundings.

Many animals that live on Earth right now are considered endangered. Learn about the threats to their existence, as well as efforts being made to protect them, with this twist on a classic Guess Who board game.