A great addition to your literacy corner, these printable cards encourage kids to make letters with Magna-Tiles, Picasso Tiles, and other magnetic tiles. It is a fun hands-on way to teach the alphabet to preschoolers and kindergartners who like building. Also check: Magnetic Tiles Lowercase Alphabet, Magnetic Tiles Numbers, Magnetic Tiles Geometric Shapes, and Magnetic Tiles 2D Creative Designs. 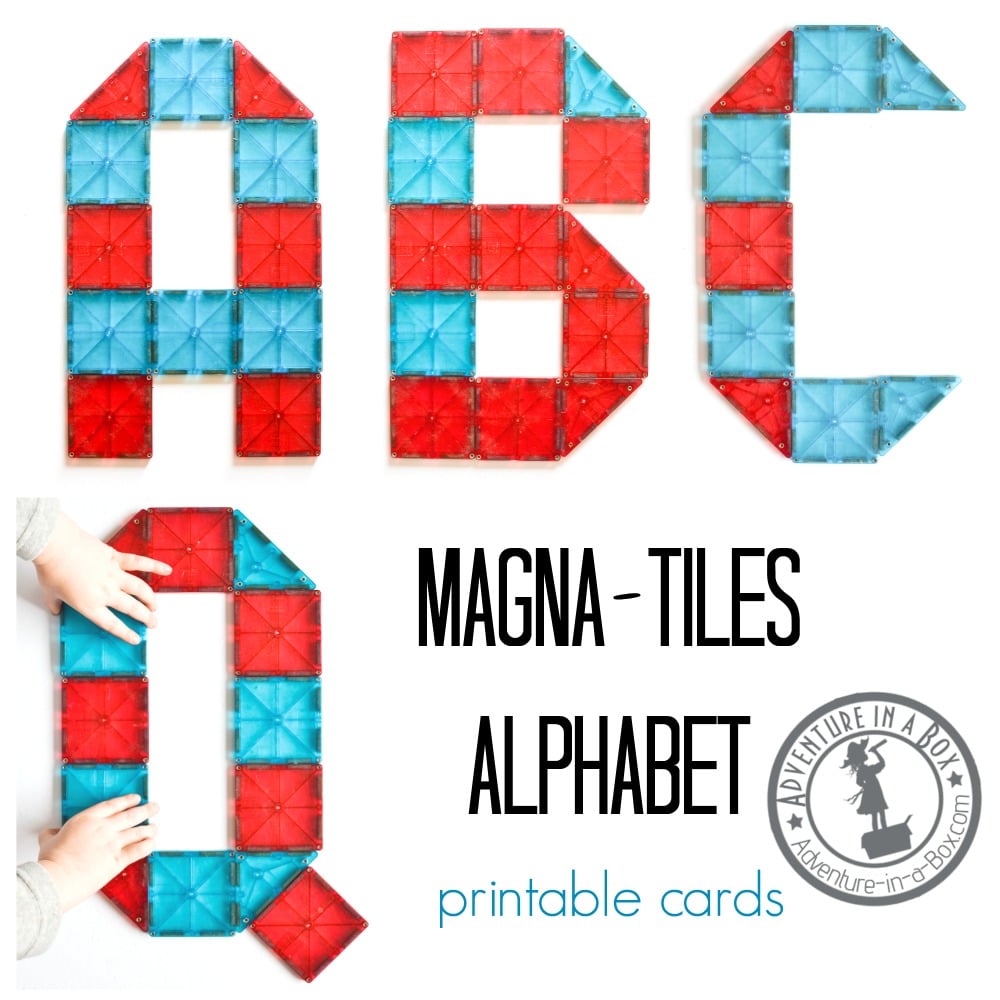 The post contains Amazon affiliate links to products we used.

If I had to name my son’s favourite toys, I wouldn’t think long. Lego and Magna-Tiles top the list, no competition there. They don’t get packed away for longer than a night, and whenever he develops an interest in something, it has to be built in either or both. So he built cars, trucks, whales, spaceships… and now he is into letters.

A month ago, my son (3) pointed at the big yellow “M” hanging over the shopping centre and said, “Hey, that’s M! Let’s go to McDonalds!”  So much for a moment of great importance. But I felt proud anyway. That was the first time he showed that he could recognize letters. Up until then, we had been pointing letters out to him when it seemed pertinent (you cannot miss that “M”!), and in a very relaxed manner. He didn’t seem impressed or interested. Over the last month, that has definitely changed. Letters were always available for him to play with, in the form of magnets on the fridge or in puzzles, but now he’s actually attracted to them. He points at letters he can recognize, and he’s proud of his ability to make letters with different materials. Buttons, beans, my necklace, Lego… and of course, Magna-Tiles!

This is a little literacy corner we set up for him to play with Magna-Tiles. There is a basket of Magna-Tiles there and the printable cards with uppercase letters I made. 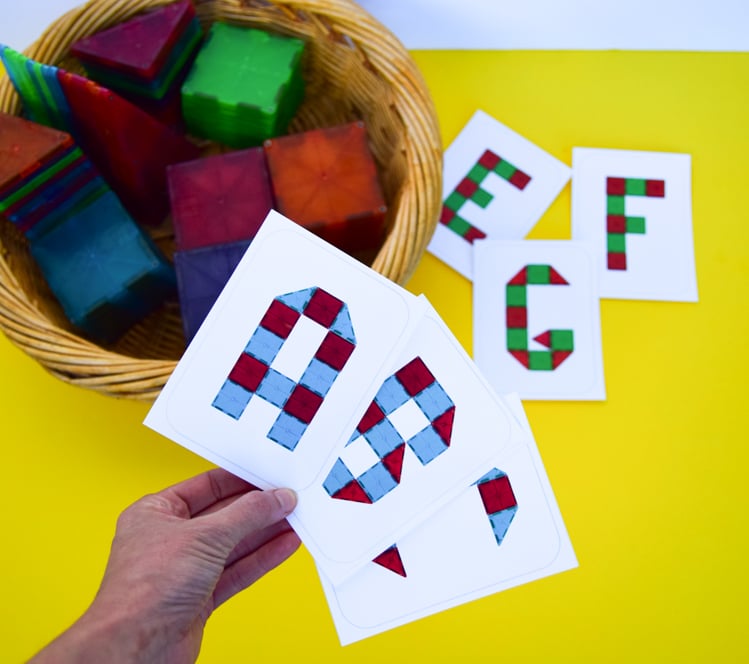 Magna-Tiles, if you aren’t familiar with them, are exactly what their name suggests – magnetic building tiles that can assembled into surprisingly complicated geometric constructions, both two- and three-dimensional. We built the whole alphabet – 26 magnetic letters – with our Magna-Tiles. Later on, we also did lowercase letters and numbers. I turned our Magna-Tile letter designs into printable cards, so that my son could go back and refresh his memory when he needs it. He also uses the cards as puzzles and repeats what is on them. It helps him to practice patterning and matching skills. Then, other times, he likes to improvise and build his own versions. 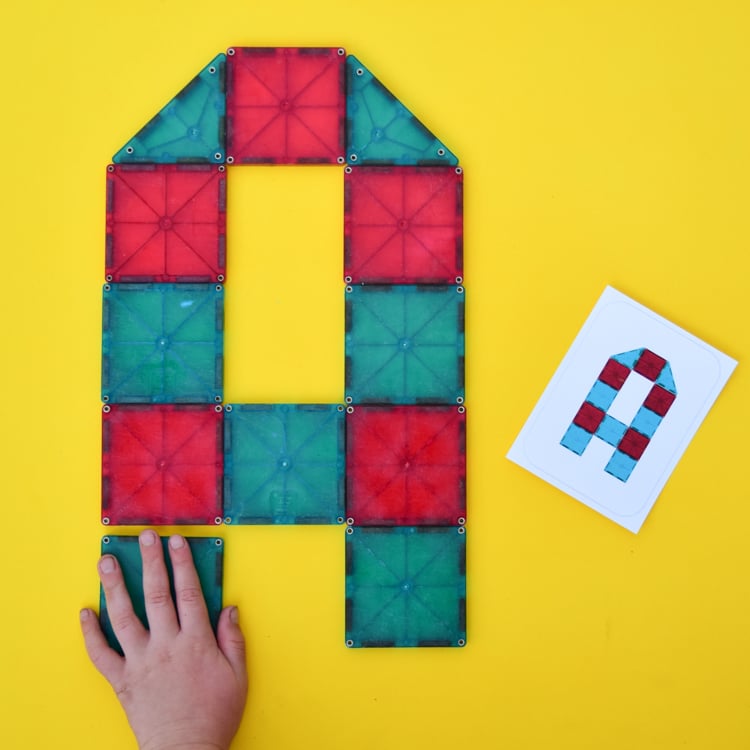 How to Use the Magnetic Tile Cards

Print and cut the Magnetic Tile Uppercase Alphabet Cards out. There are three different scales of cards in the set: 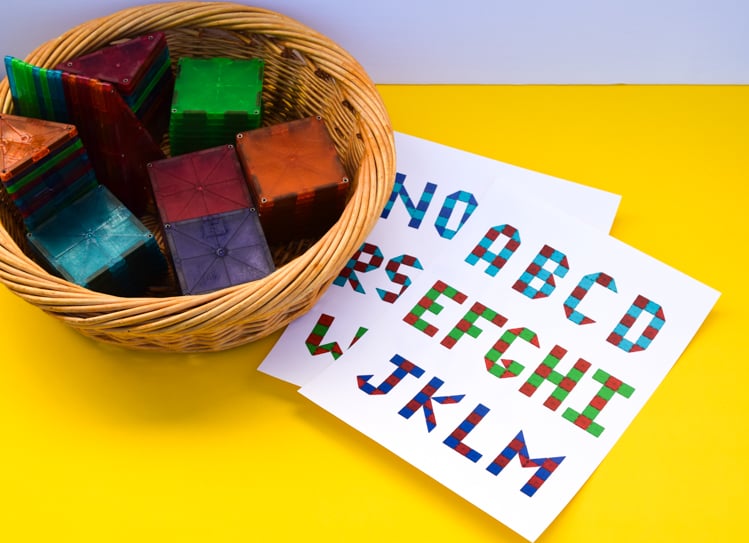 All 26 letters can be built with the Magna-Tiles 100 piece set. 64 pieces (2 sets of Magna-Tiles 32 piece sets) should be enough as well, but you may need to improvise a little. The letter X was the only one requiring all 20 equilateral triangles in the set.

A lot of projects that I write about require some level of collaboration from parents, but my son doesn’t need any help to build with these Magna-Tiles cards, nor does he even need my prompting. He enjoys building letters, just like he enjoys building spaceships, and does so whenever he feels like it. It sure warms my heart to come into the room and see some mirror-image Rs on the floor. Sometimes Budster uses the cards, but he also has some of them memorized. M is still one of his favourites, but he’s also fond of B, P, R and S. 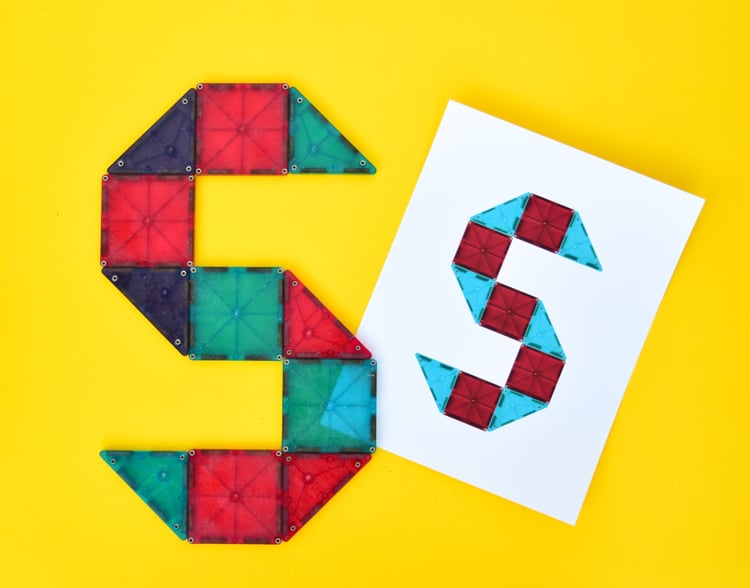 Magna-Tile alphabet cards are great for helping kids figure out how letters are built and what elements they may have in common. For instance, I think that Budster learned P and R quickly and developed a fondness for them when he found that he could change one into another. It was a discovery he made on his own, which made it even more special. Here he is, absorbed in making the transformation happen. 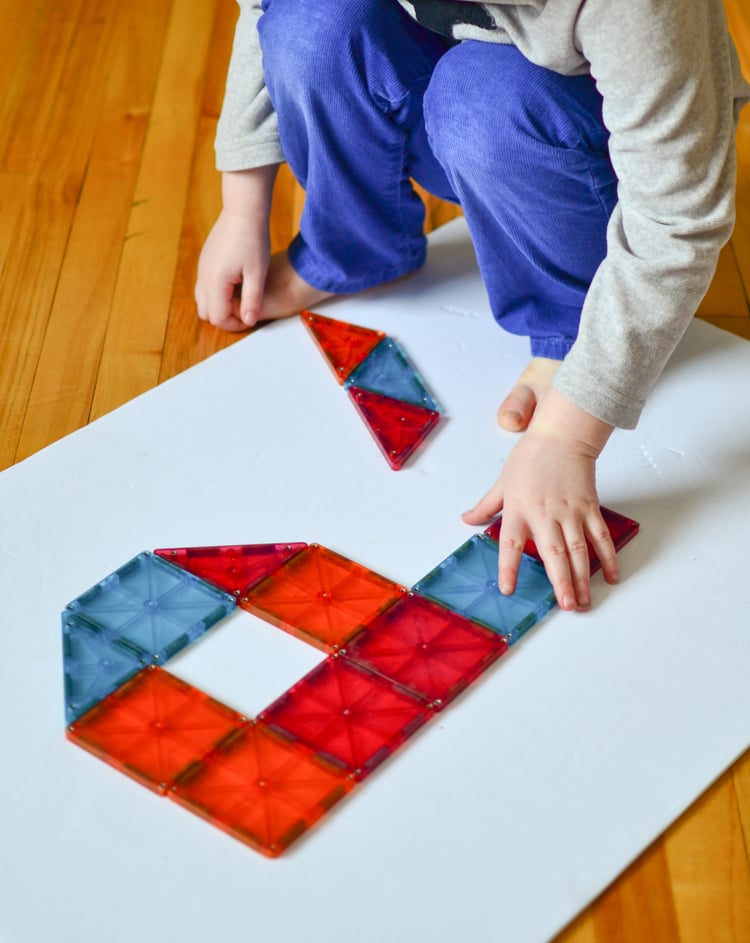 Magna-Tiles allow my son to experiment with letters to his heart’s content and create variations in designs. Lately he’s taken to adding an extra dimension to his letters – literally. 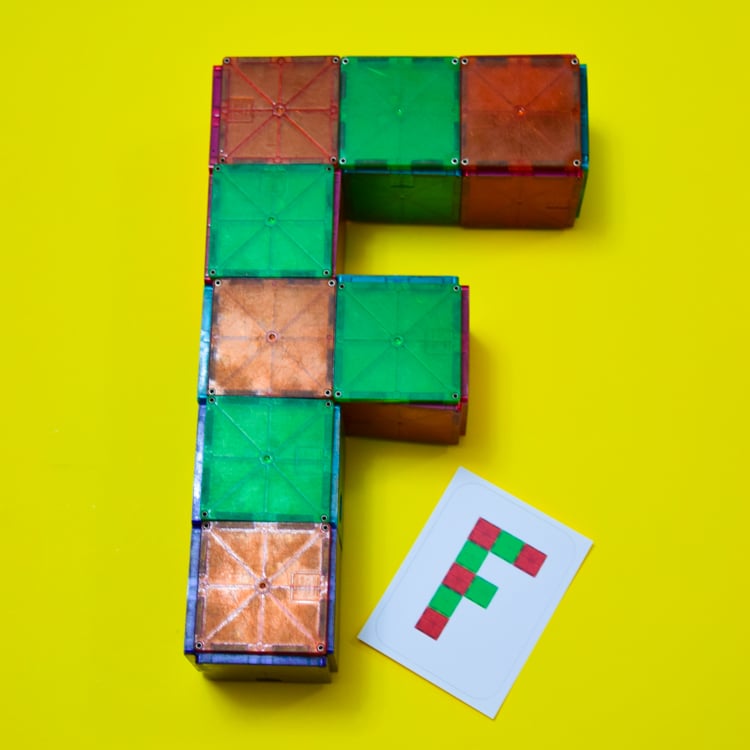 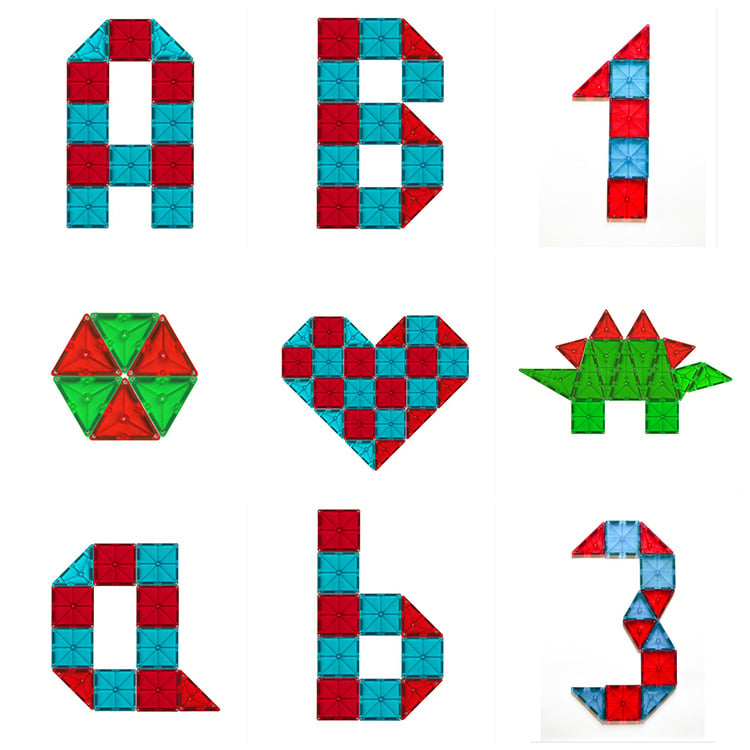 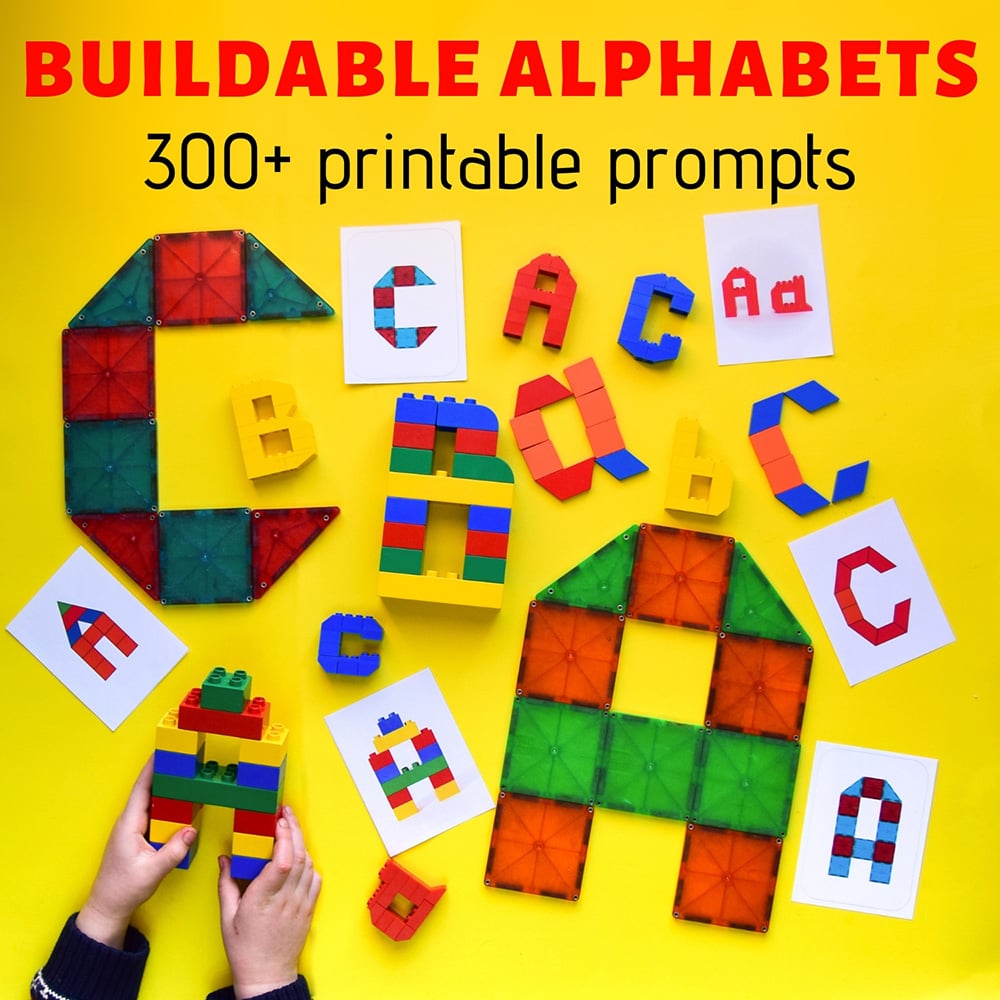 Build the alphabet from pattern blocks. 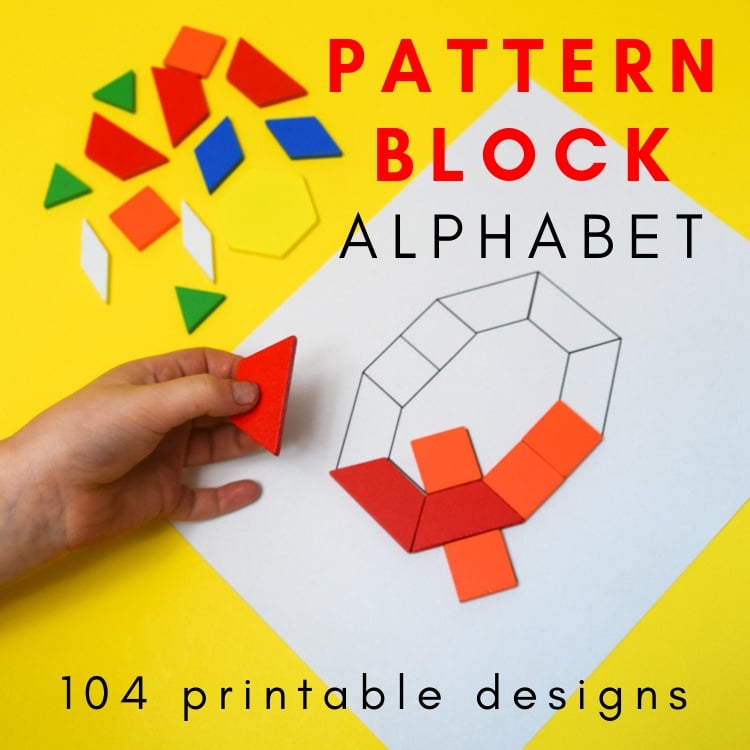 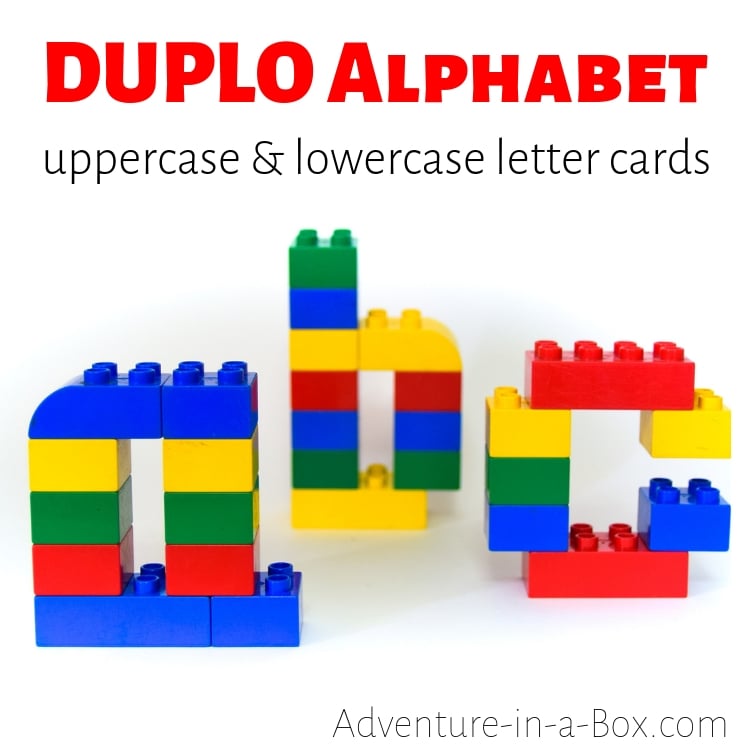