Based on Aesop’s fables, these printable shadow puppets will let your kids make their version of three fables (Hare and Tortoise, Fox and Crow, and Fox and Crane) and stage a shadow play at home or in the classroom! 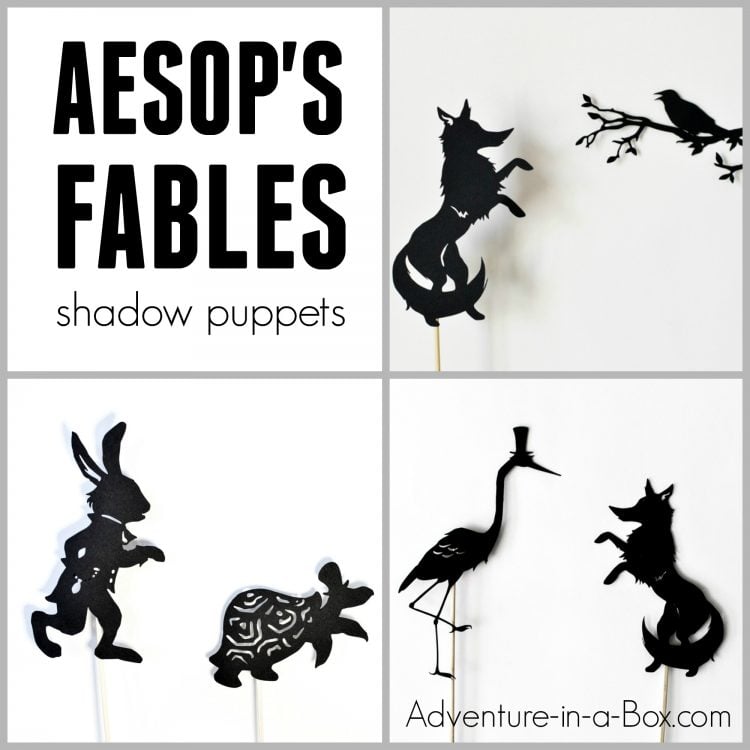 Aesop’s Fables is a fascinating topic to study with children. They are short and concise, yet full of wisdom. They feature animal characters, which make them rather amusing for children, while they’re still working on understanding their full meaning. Fables are interesting from historical perspective since they were created in ancient times. At the same time the lessons they teach are fully applicable to modern behaviour, and so reading them with children can spike fascinating and useful discussions.

Fables also make for a very good shadow puppet show. They usually feature just a couple of characters, so a whole show can be easily conducted by one or two people. If you want to try a shadow puppet play, fables would make a good first set!

How to Make Fables Shadow Puppets

Get the patterns here or buy the puppets already cut here. 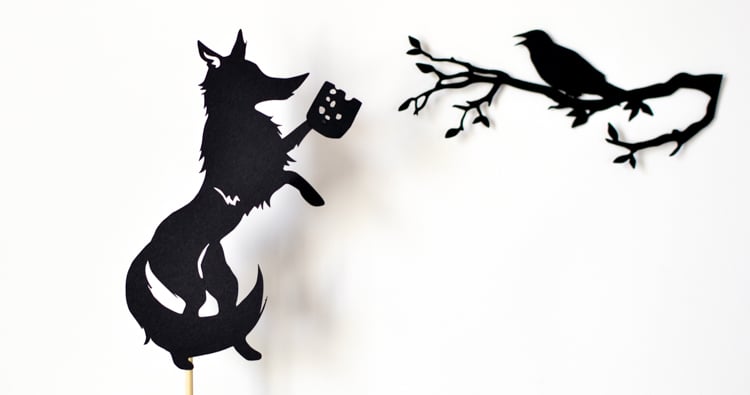 You can cut the shadow puppet patterns using traditional tools (scissors and a hobby knife) or using silhouette cutting machines (Silhouette or Cricut). The first takes a little longer, but doesn’t require any special tools at all. The second is very easy and fast, but requires an investment in a specialized machine. Our designs for shadow puppets are saved in PNG format, so that they can be used for either method.

Please, read this post to compare the pros and cons of different options, as well as a detailed tutorial for cutting shadow puppets.

In the fable a Crow has found a piece of cheese and retired to a branch to eat it. A Fox, wanting it for himself, flatters the Crow, calling it beautiful and wondering whether its voice is as sweet to match. When it lets out a caw, the cheese falls and is devoured by the Fox. The morale is not to fall for flattery! 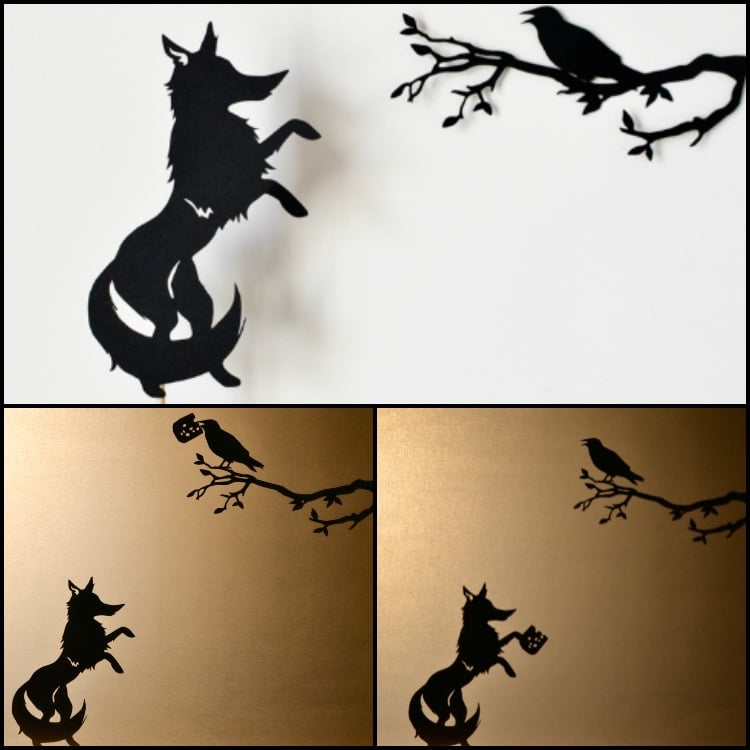 The story is about a Hare who laughs at a slow-moving Tortoise. Tired of the Hare’s behaviour, the Tortoise challenges him to a race. The Hare soon leaves the Tortoise behind and, confident of winning, takes a nap midway through the race. When the Hare awakes however, he finds that his competitor, crawling slowly but steadily, has arrived before him. The morale of this fable is that natural talent can sometimes be ruined by laziness while zeal and perseverance can give amazing results. 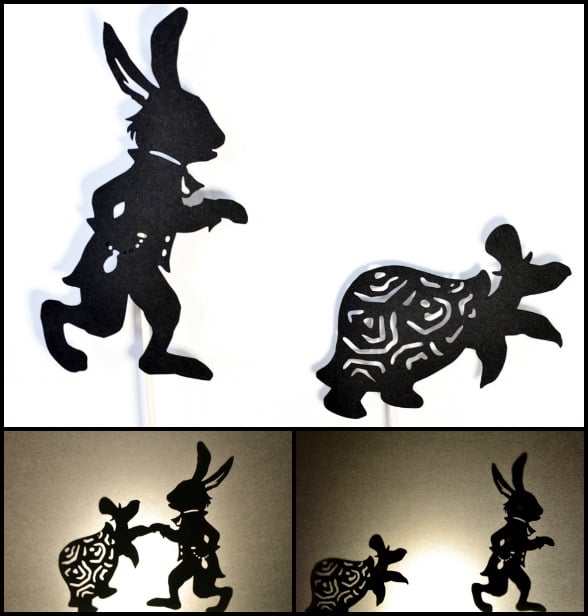 Also known as Fox and Stork.

The fox invites the stork to eat with him and provides soup in a bowl, which the fox can lap up easily; however, the stork cannot drink it with its beak. The stork then invites the fox to a meal, which is served in a narrow-necked vessel. It is easy for the stork to access but impossible for the fox. The moral drawn is that the trickster must expect trickery in return. 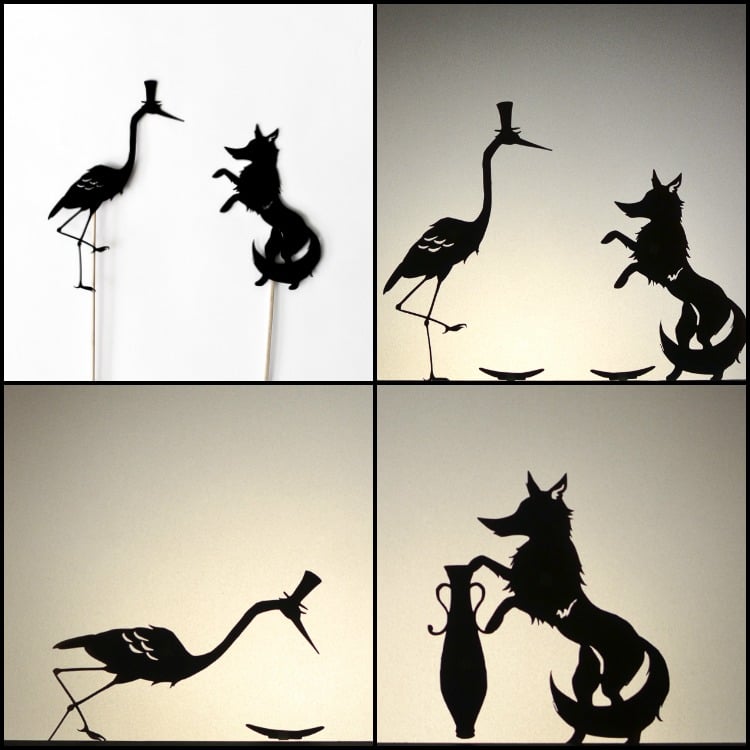 Get the patterns here 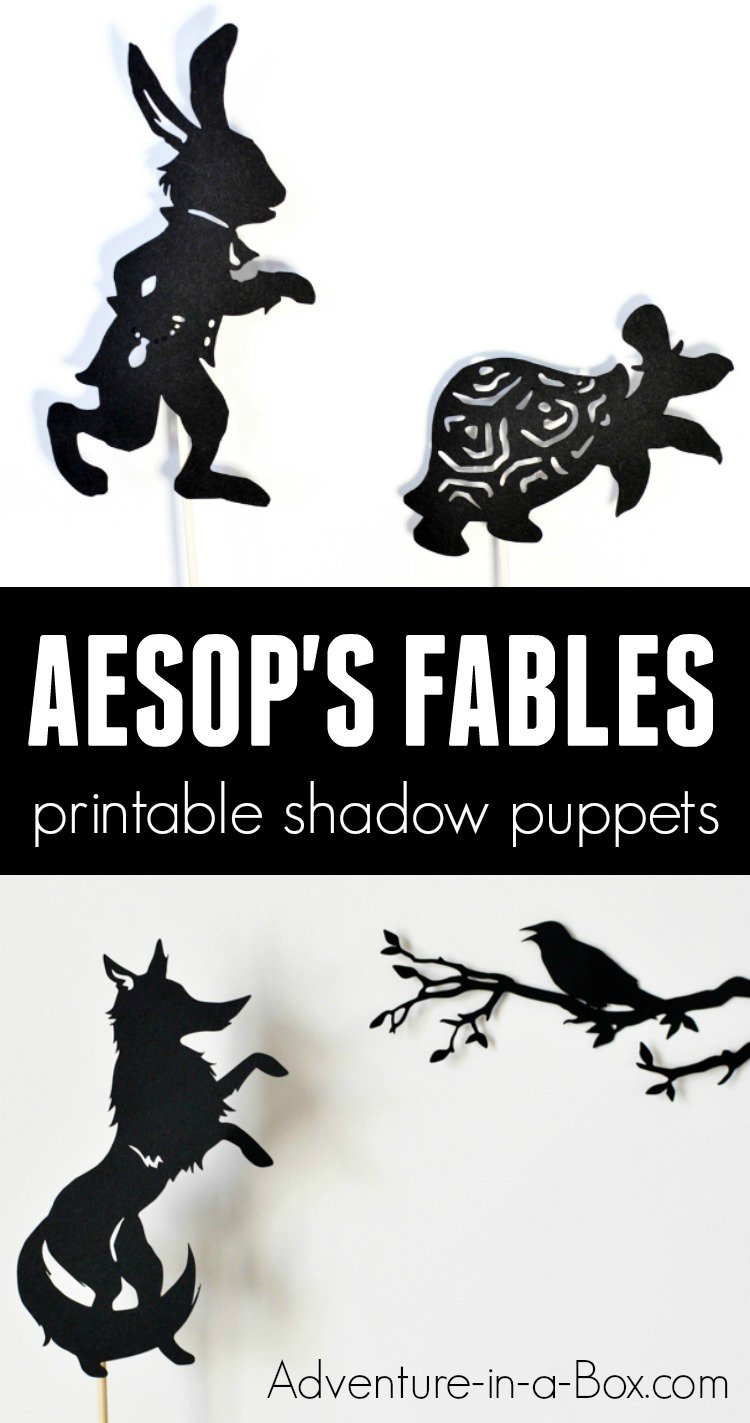 Load More... Follow on Instagram
1565 shares
All the digital products are 30% off with the code PRINTABLE2022! Valid until December 1.Shop