Like many kids, my son likes everything on wheels. Cars, construction machinery, emergency vehicles, trains. Especially trains. He also loves playing in the backyard, and for several summer now, I’ve been thinking how much fun it would be to build a railroad outside. I’ve even kept a little set of tracks with the connections that didn’t fit well with the rest of ours especially for that purpose. But summer after summer, I’ve forgotten to carry out my plan. The summer days are busy with all sorts of fun, and moving houses also doesn’t help. 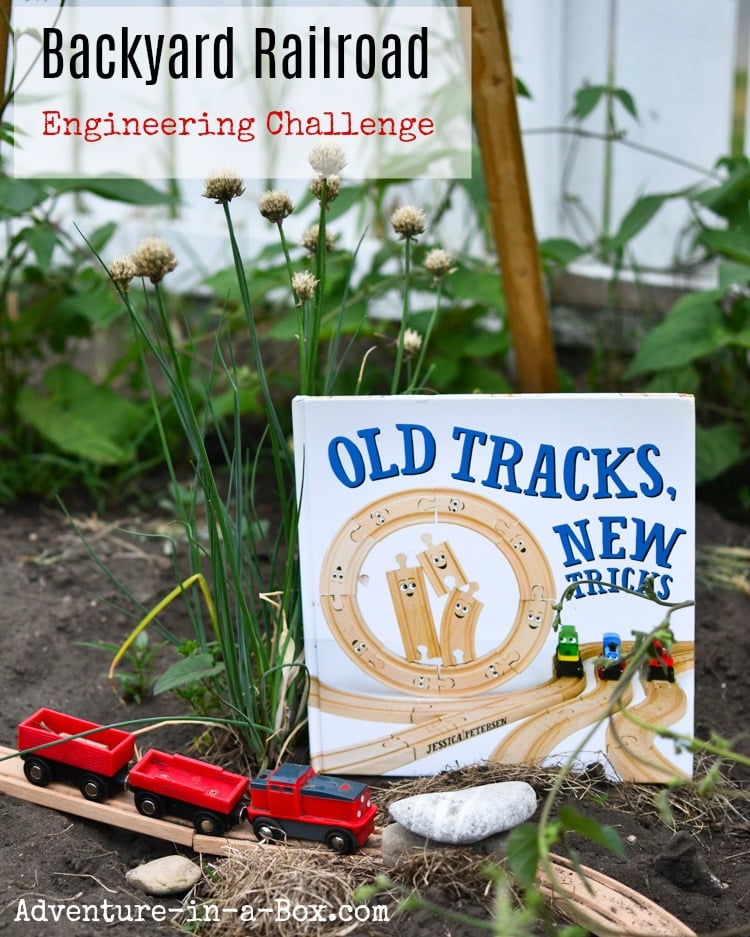 The post contains Amazon affiliate links to products we used in its creation.

Then, a few days ago, Anselm sat on the couch with the book Old Tracks, New Tricks by Jessica Petersen. It’s a great new book we got a couple of months ago with a very unique style of illustrations. Instead of drawings, it has photographs of the characters – wooden tracks and toy trains. It’s somewhat reminiscent of those classical Thomas the Train cartoons with stop animation, but in this story the tracks are the main characters! Isn’t it fun? I would have never imagined that three wooden tracks could be so spunky and pretty much start a revolution in the playroom!

I think that it makes the story very easy for my son to relate to, because it could happen right on the floor of our playroom. However, the story touches some very broad topics. It is about being adventurous and trying new things: including others in play and inventing new ways to have fun with old toys. Why, the little tracks offer at least a couple dozen original ideas for playing with them! Painting tracks and painting with trains, combining trains with LEGO and making track domino, building a rocket with tracks!.. 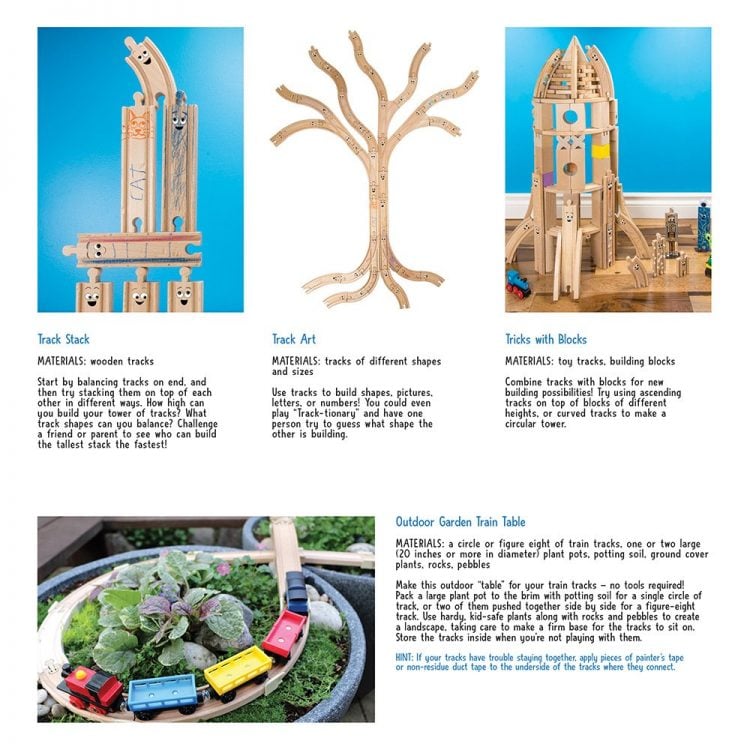 And there, on the last page, was a picture of a railroad track built in the backyard.

And I enthusiastically responded, “Yes!”

Even though I had initially planned to use the set I kept for this purpose all these summers, as soon as we came into the backyard, excitement got better of us, and we ended up dragging all of our tracks outside.

In the previous years, we made a sandbox for the kids. In the whole summer, they would spend there a couple of hours, so this year we decided not to bother. The place where the sandbox was became a garden for Anselm, and he got a good chunk of our garden space for digging ditches and making mud pies to his heart’s content. That seemed to have worked out a lot better. That was also the spot where we built our railroad.

Explore your backyard with 10 printable STEAM projects for children! They will learn about nature while playing games, completing engineering challenges, going on scavenger hunts, and making art with natural materials.

1 – A pool of water. We dug a plastic bin into the ground. This is how we supported the bridge – with a block and a rock. There is also something to be said for using tracks of two different brands. IKEA tracks I mentioned in the beginning of the post have plastic connectors, and when attached to the tracks of other brands (Brio, Thomas the Train, Orbrium, etc), they fit very tightly. When Anselm was smaller, he couldn’t put those two together, so I took them out of our box of tracks. But now they’re very useful for making strong connections! Like this one, over the bridge. 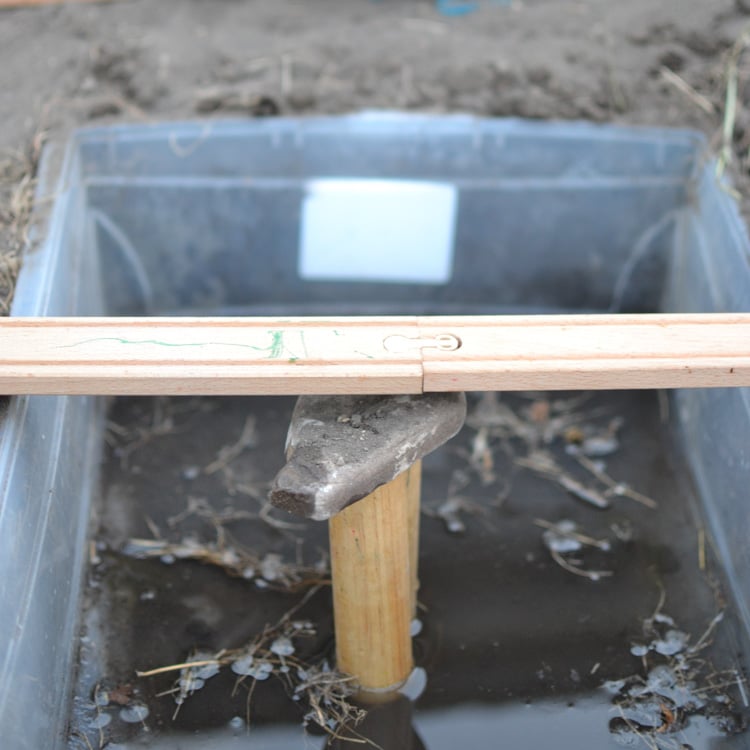 2 – Mountain of dirt! There was quite a bit of dirt left after the digging, so Anselm formed a mountain. We used ascending/descending tracks to go up and down the mountain. It was so fun to have a real mountain railroad path! 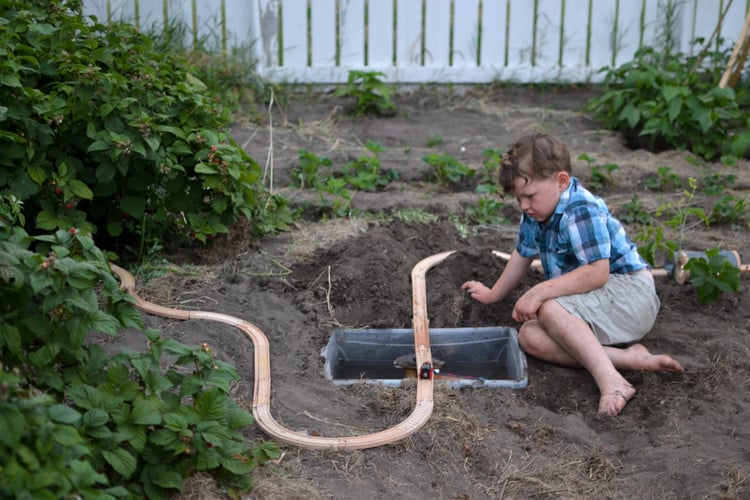 3 – Trees. Our lilacs constantly need trimming, so we snapped a few branches off, and Anselm planted some around the railroad. 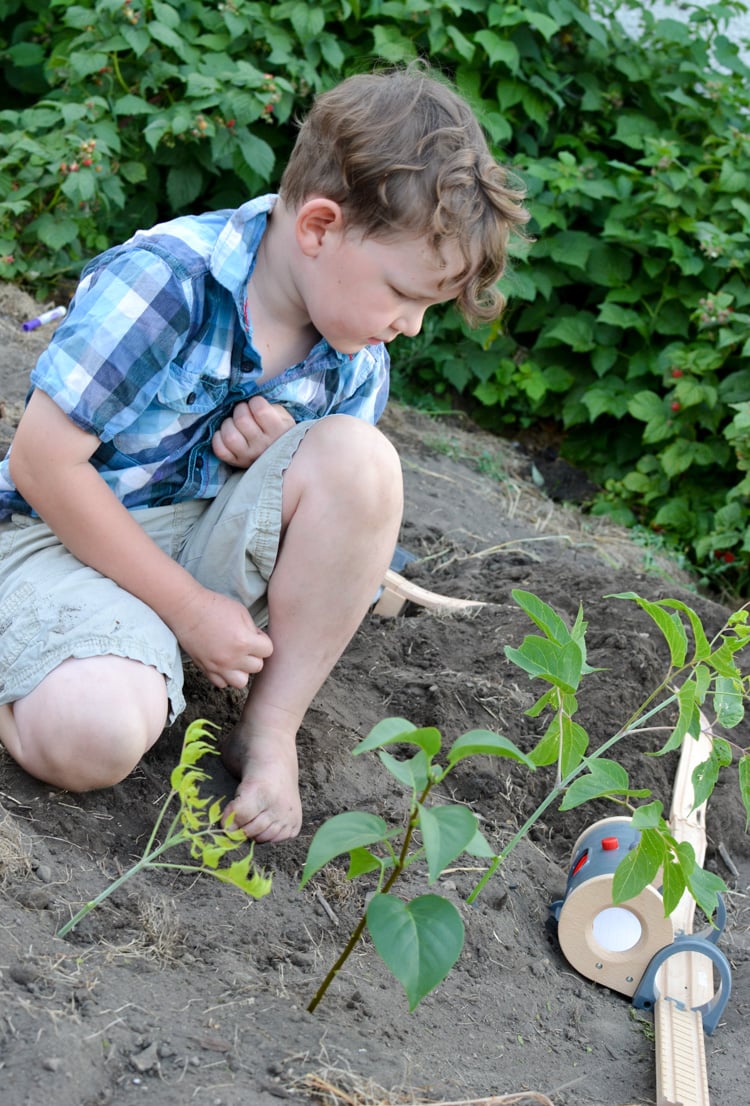 4 – Other natural objects. We also used driftwood and rocks to create landscape around the railroad. The rest was what already grew in our garden. The railroad came out of the raspberry bushes, crossed the strawberry patch and ended in the bean teepee. 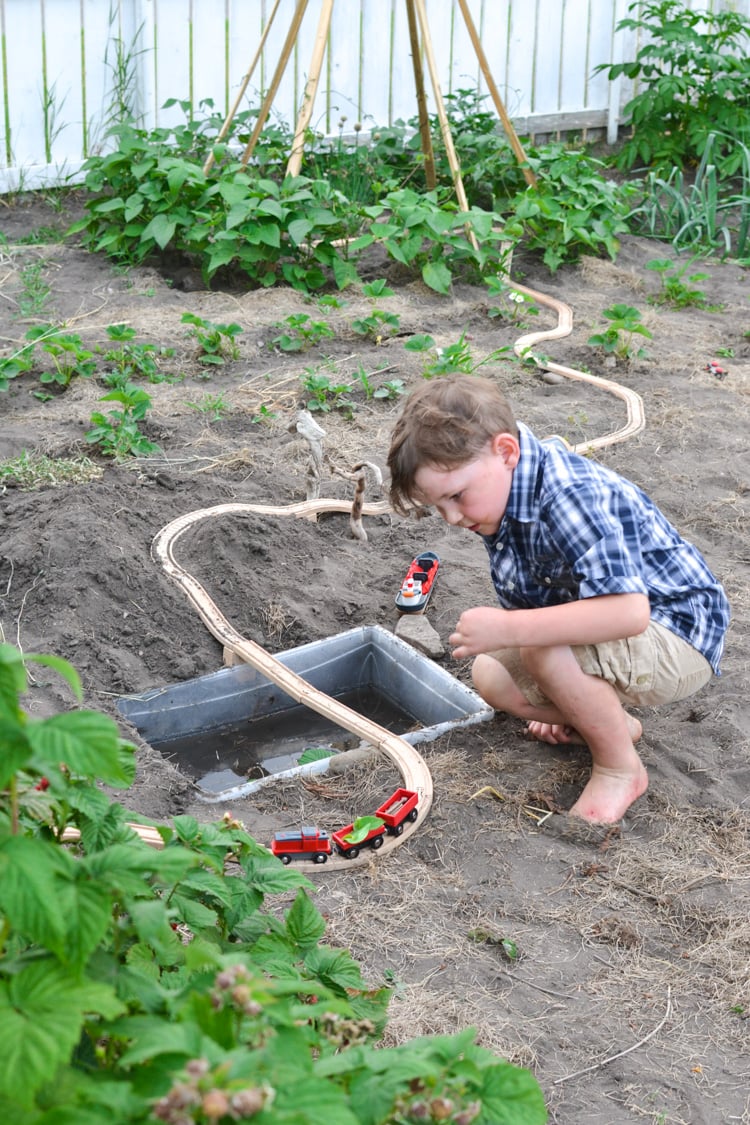 Watch Us Test It!

The most challenging part of engineering this railroad was making it even enough for the trains to run along smoothly. It was also the most fun to figure out how to make it all work. Sometimes we would put a rock under a track, and other times we would just add a little bit of dirt underneath. 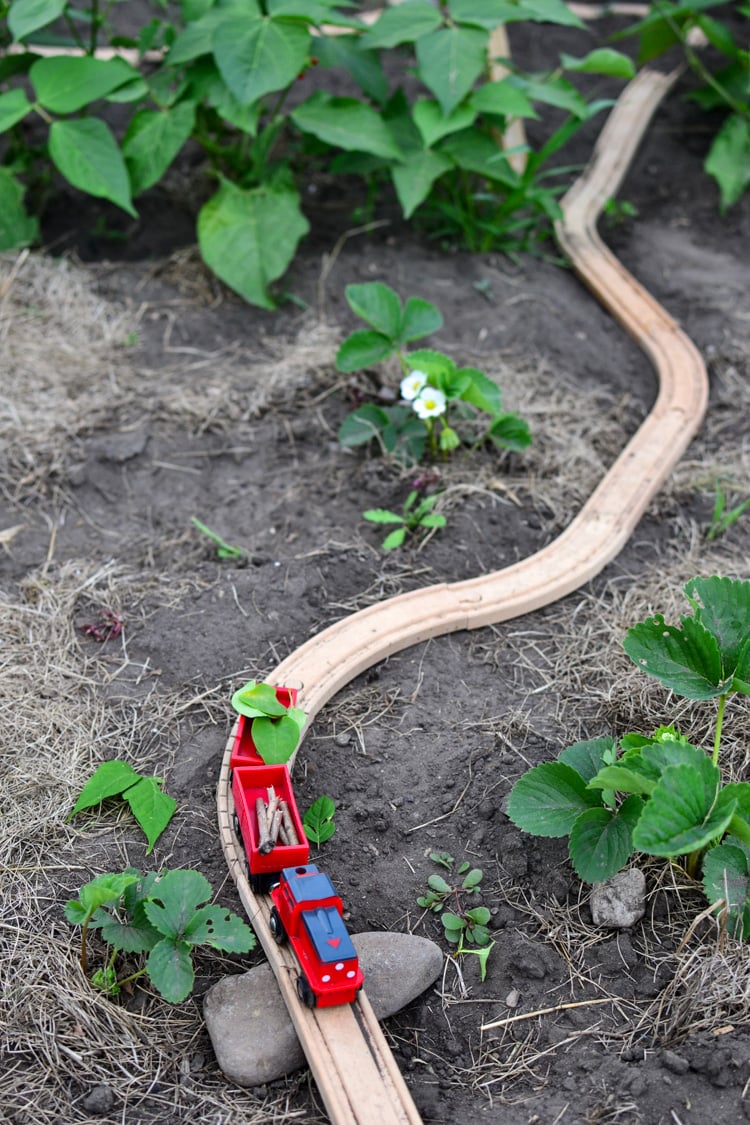 In this video, we’re testing it with our little BRIO battery-operated train. It ran smoothly most of the way, but it needed help a couple of times.

Further Adventures on the Backyard Railroad

Building play worlds seems easier outside than inside, surprisingly. A pile of dirt can be a mountain, a clump of chives can represent a jungle. We loaded the train cars with important goods – sticks and leaves! But oh no, there is a pile of rocks in the middle of the railroad. According to Anselm, it was an avalanche! Is there going to be a derailment?

There is definitely scope for imagination when one brings familiar toys outside! 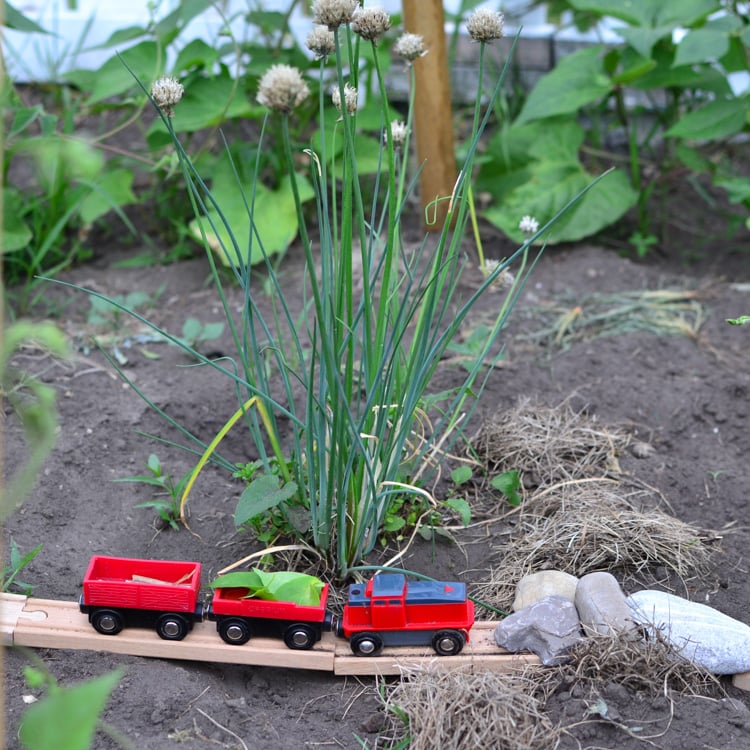 How to Make Outdoor Tracks

Last but not least, an important question – how dirty did we make our tracks? Not very. I think they would not be dirty at all if we had brought them inside the same day. The dry sandy dirt of our backyard shook off very easily. But we spent the evening building the railroad, and it didn’t seem like enough time to play with it, so we left it out until morning, Unfortunately, we had a little rain over night, despite being in a long dry spell. It made dirt stick to tracks in a few places. Not bad, but in case you possess a set you really treasure, you might want invest in a different cheap one for playing outside.

Now, wouldn’t a bunch of tracks designated for backyard play be great?

Tip: in order for wooden toys to last longer outside, spray them with outdoor varnish a couple of times!

Make a foam airplane glider with a printable template