Christmas Around the World Colouring Pages 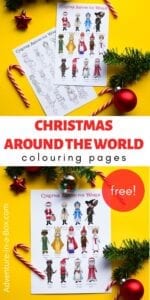 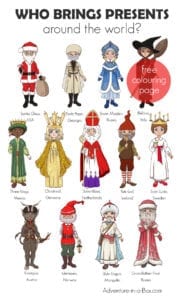 Celebrate the winter holidays with a free poster of Christmas characters and Christmas around the world colouring pages!

The closer it gets to the winter vacation, the more challenging it becomes to get any schoolwork done. Cue holiday-inspired (but secretly, quite educational) activities!

This is one of them.

In English-speaking countries, the majority of children are intimately familiar with the concept of Santa Claus. Whether or not they believe in Santa, they are all certain of what he is supposed to do, that is, bring presents! Indeed, Santa Claus is the most famous gift-bringer these days, and his signature hat has become a symbol of holidays even in those countries that did not celebrate Christmas before, such as Japan.

But not all over the world!

The truth is, there are plenty of other original characters around the world who still hurry to bring children presents on Christmas eve or thereabouts.

In Italy, Befana, the Christmas witch, brings presents to children while riding on a broom.

In Spain and Mexico, Three Kings come. They usually fail to procure camels, and instead use more modern means of transportation – steamboats, trains, and sometime horses.

In Iceland, there are thirteen trolls who come for thirteen days before Christmas. Each one has a present to bring, which adds up fast. On the other hand, that means thirteen days of behaving well for Icelandic children!

The poster and the complimentary colouring page portray thirteen of the most popular gift-bringers around the world.

If you’d like to plunge into the festive study of Christmas around the world, you can check out our Christmas Around the World Bundle. It includes detailed descriptions of twenty characters, a Christmas board game and paper dolls.

Play this game of festive deducation that features twenty characters from around the world that come out at Christmas time or thereabouts. Enjoy it as a two-player game, a classroom game, or a party game!

Dress your paper dolls as Christmas characters from around the world. From the famed Santa Claus to the mysterious Olentzero, from the sweet Christkind to the horrifying Krampus—the world is full of interesting and unique traditions associated with the season.

And if you just want something to introduce the topic of cultural diversity and Christmas around the world into your classroom or playroom, this is a good place to start.

Get the Free Poster & Colouring Page!

You can also get the extended collection that includes twenty posters and twenty colouring pages.

Get the Full Pack of Posters and Colouring Pages!

Each of them features a full-page illustration of a Christmas character alongside a story of each character, the countries they visit, the dates they come on, and a holiday greeting in their native language.

Every colouring page features a black and white picture of a character to colour and a list of questions for students to answer, summarizing what they have learned about each character. Students can use the colouring pages to make their own book of Christmas characters!

Where did the trend of decorating Christmas trees originate? Why were candy canes invented? Which carol inspired the impromptu Christmas truce during World War I? This is a game of fun facts and trivia about one of the most beloved holidays in the world—Christmas!

Get ready for Women’s History Month with a free colouring page and a printable poster, featuring twelve amazing women and their inspiring quotes.

Make a Santa-Claus dress-up doll with this free printable design, then change his costume and he’s a Christmas elf!