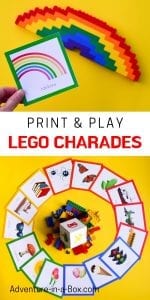 If you are planning a LEGO birthday party or simply like LEGO and playing games as a family, try this LEGO twist on the popular games of Charades or Pictionary!

I love playing board games, but my son decidedly prefers LEGO. Then, one time, someone in the gaming community mentioned LEGO Creationary, a board game where some players show off their building skills, while others try guessing what is being constructed, I thought, “Bingo! That’s how we can meet half-way.” Besides, games like Pictionary, Code Names or Charades have already been popular as party games in our house, and this idea sounded similar, but with a novel turn.

However, as it turned out, the LEGO Creationary Board Game had been out of print for a few years. When I checked last, it was being sold for $100-200 here in Canada. That was a problem. So I decided to make our own instead. It was not the first printable game I had ever made for my son, but the process of making this one was particularly enjoyable. As I was going through the possibilities of words to put into it, I imagined how each one could be built, and that was a lot of fun.

Still, the actual game play was even better!

You can keep score in a notepad, but you can also build a LEGO score board. We used two 10’x10′ green brickplates and built ten squares with numbers on them. In our game, no one went past ten, but if that happened, players could start over from the beginning after getting a LEGO brick to signify that it was their second round.

Building a LEGO board is also fun because everyone can build their own tokens. Since we sorted our LEGO and put all the figurine parts in a separate bin, it was pretty easy to organize, and all the kids who we played this game with demonstrably enjoyed this part. The little red-haired girl with a bunny, for instance, is my niece’s LEGO avatar. The knight is my son’s friend who was excited to find LEGO parts that matched so neatly.

Now, what about the bricks? If you have a LEGO Classic tub (like this Medium Classic Tub), that would be ideal. Of course, if you have a big collection of loose bricks, that will also work splendidly. One useful hint would be to pick out a few of wheels and eyes prior to playing. Wheels will come handy when building the vehicle categories, and eyes will be useful for animals.

You will also need to print and cut the cards, as well as put together the die.

The five categories are:

Five sides of the die correspond to five different categories, and the sixth side gives players a chance to choose whatever category they want.

The categories put the guessing in perspective, so that if the guessing players know that the category is “animals” and the building player started building with green blocks, they could start guessing right away. Is it a frog? A parrot? An alligator? This is part of the fun. Of course, there is always an option for you to abandon the concept of categories, mix all the cards together, and just take turns with drawing cards.

How to Play LEGO Charades

Throw a die and find out the category in which you will be building. Draw a card from that category. Build whatever is depicted on the card from LEGO bricks, while other players are trying to guess it. Both the builder and the guesser will get points at the end!

The trick to enjoying this game is to not try to make your creations perfect. It may be frustrating to try and build a very anatomical giraffe, but if you just try to build a yellow animal with a very long neck, someone will promptly guess it.

Here are some real creations from the game we played with kids. My son built a quick stoplight.

Of course, sometimes it depends on what pieces are available. This camera came together pretty quickly once I found the piece that looked like a camera lens.

Once someone gave a correct guess, the points are given, and the next person becomes a builder. Depending on the number of players you have, you can play until everyone has been a builder 2-5 times.

Whoever progressed furthest on the LEGO score board by building creatively and guessing well wins!

We’d be delighted to see your LEGO creations, inspired by this game! Tag us on facebook or instagram (@adventureinabox). 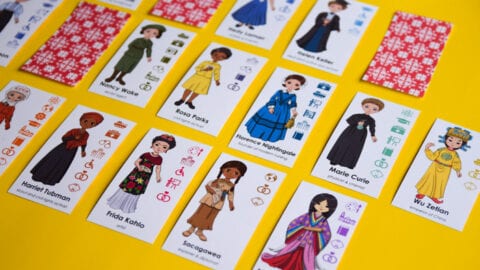 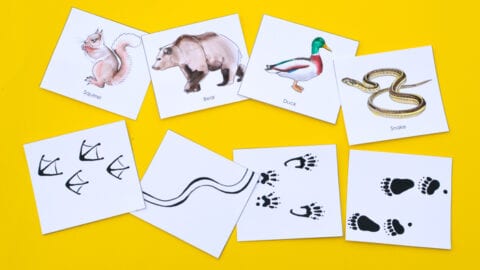 Play this printable memory game by matching animals with their tracks and learning where to find them! 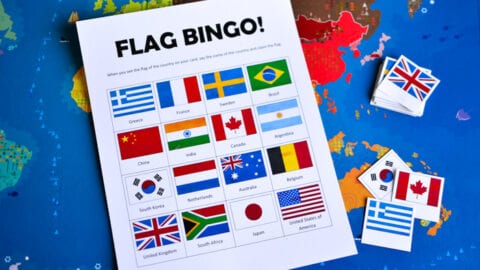 Flags of the World: Bingo Game

Flag Bingo is a printable educational game that challenges children to learn and identify the flags of the world. 120 countries are included! 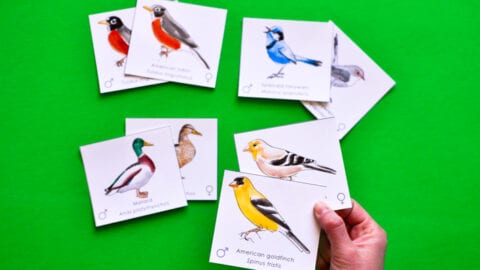 Colouration is one of the most noticeable things about birds, and the most useful in their identification. But males and females don’t always look the same, and males are often more colourful than the females. This game teaches children not only how to identify birds, but recognize their gender! 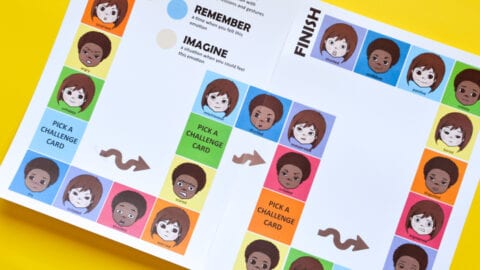 Players will be challenged to act, discuss and imagine, while learning all about emotions and each other. 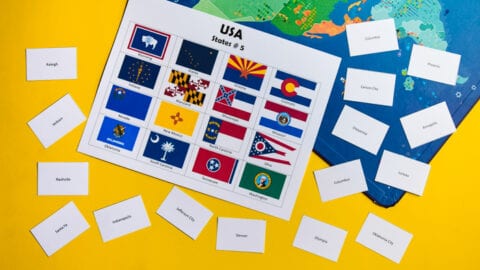 This 4-in-1 printable geography game is designed to encourage children to learn about the USA states, their flags and capital cities.