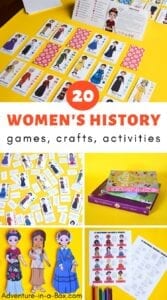 March is Women’s History Month. Explore the topic of famous women in history for kids through engaging games, crafts, and activities!

Do you know who wrote the first novel? Murasaki Shikibu, a lady-in-waiting who lived in Japan between the 10th and 11th centuries, is considered to be the world’s first novelist.

Agatha Christie is the world’s bestselling novelist. Florence Nightingale was the woman who established nursing as we now know it. Helen Keller was the first deaf-blind person to graduate from university.

History is full of amazing stories about women – as well as about their struggles to get accepted.

Before coming to work at the university of Paris, Marie Curie got rejected by the university in her native Poland, simply on the grounds of being a woman. Florence Nightingale’s parents were outraged when she decided to pursue nursing instead of getting married, as was fit a girl of her social class at the time. Helen Keller’s parents were supportive, but she had to overcome a lot of difficulties in order to keep learning and going to university after an early childhood disease left her deaf and blind!

These women are worth knowing about! Dig into the topic of famous women in history for kids through engaging reading, games, crafts and hands-on activities.

Play Board Games that Feature Famous Women in History for Kids

Using Women: Guess Who Game, children will learn about twenty amazing heroines who changed the world. It plays similarly to a classic Guess Who game, however, the players can’t ask about appearances. Instead, they ask about each woman’s accomplishments, based on the icons featured on the cards.

“Did she contribute to science?” “Art?” “Did she graduate from university?” “Did she write a book?” Those are some of the facts about these amazing women that children will learn while playing the guess who game.

Below is another game about famous women in history. It puts a particular focus on their achievements. Actually, there are three games that you can play, using the same cards – a sorting game, a matching game, and a memory game!

If you’ve tried one or both of the games above, Famous Women Bingo is a follow-up for them. In the bingo game, players collect cards depicting famous women from history on their bingo cards!

If you’d like a quick and simple art project, print and colour a poster that features twelve inspiring women alongside their famous quotes. It’s also free!

If you have a bit more time on your hands, print and make your own set of famous women in history paper dolls! It features twenty costumes that will turn our paper girls into pioneering women from history.

Many of the costumes are quite symbolic, adding a new dimension to the study. For instance, Marie Curie is portrayed in one of her dark dresses. Did you know that Marie Curie chose a dark navy dress as her wedding attire, when marrying fellow scientist, Pierre Curie, and then used it as her lab frock for seven years?

Explore Frida Kahlo’s vibrant art with Frida Kahlo’s projects from Red Ted Art or try to imitate the art of another female artist, Yayoi Kusama, with one of these projects by Lotta Magazine.

Explore the bus that Rosa Parks rode with this colouring activity from Education World.

This collection from Cool Mom Picks features a selection of 16 free colouring pages of famous women.

Carly and Adam paired their favourite books about famous women with appropriate crafts. They offer tutorials on how to build an airplane while reading about Amelia Earhart or a lunar lander while exploring the story of Margaret Hamilton.

Read Books About Famous Women in History for Kids

In my experience, there is nothing like a good book to get into the mood for exploring a new topic. Fortunately, there are many great books about women’s history for kids these days.

Besides delving into the subject of famous women in history for kids, the books empower them with the belief that real humans, not fairy-tale creatures and superheroes, are capable of amazing things.

If I had to choose one book about women’s history for kids, I’d name Rejected Princesses by Jason Porath. The author possesses the art of making each story memorable and engaging. As a result, readers end up sympathizing with each of his eighty heroines. Parts of the book can be found on his website, Rejected Princesses, which is a treasury of knowledge in itself.

Fortunately, I didn’t have to limit myself to just one book! Instead, I reviewed 25 modern books about famous women for kids, including a few graphic novels on the subject.

This is the recommended reading for Women’s History Month from What Do We Do All Day. She also has lists of books about famous Afro-American women and books about women in politics.

And here is a long and impressive list of books to read while studying famous women in history with kids from Imagination Soup.

Watch a Movie About Amazing Women

Have a family movie night and watch one, based on the biography of one of the inspiring women. There are movies about Amelia Earhart, Ruth Bader Ginsburg, Helen Keller, and others.

A Mighty Girl also has a list of movies with strong female characters. Theirs includes both fictional and non-fictional stories.

Have a Famous Women Dress-Up Party

If you want to celebrate Women’s History Month in style, throw a dress-up party! You can hit second-hand stores and put together a real costume to dress up as one of the amazing women who changed the world. A Mighty Girl has a selection of 25 mighty women costumes, featuring Amelia Earhart, Ada Lovelace, Marie Curie, Sally Ride, and many others.

Use the games and crafts from above to entertain the guests at the party, and you can also save the costume for Halloween.

Write About Your Own Women Heroes

Chances are, children already have women in their life that they admire – they can be women from history, from books, from their family or from their daily life. Encourage them to write about them and draw them!

Our Women: Guess Who Game and Famous Women in History for Kids Bundle include a prompt like this.

Who is your female hero?

Share what your favourite activities are for learning about famous women in history for kids!