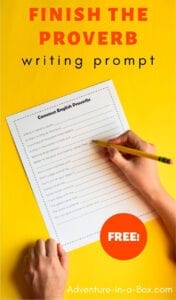 Finish the proverbs with these free printable worksheets. Both a great creative writing prompt for children and a memory exercise for adults!

As you sow, so shall you reap.

Very wise. As old proverbs tend to be. But… Doesn’t actually say much to modern children, most of who spend their life in a city. If there was something about a dump truck or a cement mixer, maybe. But sowing and reaping requires a special field trip.

After the umpteenth time that I would quote a proverb to my son and he would give me a puzzled look in response, we decided to tackle the study of proverbs in an orderly fashion. And while we were at it, we decided to take a look at proverbs from around the world, in addition to those common in the English-speaking world.

We began with a proverb matching game – we would match a proverb with its meaning. Pretty soon, my son caught on! Then it was time for a bit of a creative fun.

We did this activity with an emphasis on creative writing. You can do that – or use it as a proverb quiz.

If you like this activity, check out our family board game Proverbs. In the game, you will learn wise, funny and quirky saying from around the world, while using your wit and imagination to complete little-known proverbs and tricking other players into thinking that they’re the original sayings.

When working with common English proverbs, you can use these free printable worksheets for checking the student’s knowledge of proverbs.

When working with proverbs from around the world, turn it into a creative exercise. Give the students the list with unfinished proverbs and encourage them to make up their own endings.

Afterwards, show them the list of complete proverbs. Compare them with the versions that students created—the ones that they wrote down can often be just as good as the originals or even better!

Of course, if you are working with younger students who aren’t already familiar with these sayings, the same creative exercise can be done with English proverbs as well. Let them finish the sentences without discussing the originals first and see what kind of wisdom they can come up with!

I gave a list to my six-year-old son, and his responses were both creative and insightful. They’re definitely going into our school portfolio for the year.

“The apple never falls… unless it is picked.”

“Don’t cross a bridge… until it is finished.”

“Every cloud has… a shape.”

“A bird in hand is worth… more than a man in a can.” (Whatever that means!)

Those were the creative endings, but there were several he got right, even though I don’t think he has heard them before.

“The journey of thousand miles begins…. with one mile.”

“Better to be poor and healthy than… rich and sick.”

If you have a child who doesn’t write yet, you can read the beginning of a proverb and jot their answer down.

Share with us what your children came up with!