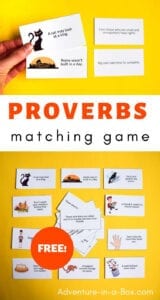 Introduce children to proverbs by playing a free printable game of matching proverbs with their meanings!

Now and again, I would share one of these traditional wisdoms with my son, and he would look back at me with this funny expression, “Say what, mommy?!”

Indeed, proverbs can be quite puzzling to a young child. They require a fair bit on the part of a person who is subjected to them, such as:

But all of this also makes it so worthwhile to study proverbs together with children!

They can practice analyzing cryptic sayings and see beyond the literal meanings. Proverbs can lead to interesting discussions about how people lived a long time ago – or in different parts of the world. And the ethical discussions with children are truly the best. After all, out of the mouth of babes…

We started our proverb study with the simplest activity – a matching proverbs game. You will find a free printable file for it at the end of the post, so you can try it with your students as well!

If you like this activity, also check out our family board game Proverbs. In the game, you will learn wise, funny and quirky saying from around the world, while using your wit and imagination to complete little-known proverbs and tricking other players into thinking that they’re the original sayings.

About the Proverbs Matching Game

While playing the proverb matching game, students are asked to match proverbs with their meanings.

If you have older students who are confident in reading, you can give them all the cards and ask them to match them to their meanings. There are fifteen proverbs and fifteen meanings – you can take all of them or just choose a few at a time.

If you have students who aren’t confident reading by themselves, take five proverbs at a time and read them out loud. The students can venture their opinion on the meaning of these proverbs. If they don’t have any suggestions, that’s just fine! Read the meanings next, and have them match those to the proverbs.

Discuss proverbs together, once the meanings are established.

Here are a few tasks you can give when discussing proverbs:

English Proverbs vs Proverbs Around the World

Around the world, there are many proverbs that give similar advice, but phrase it differently.

The next challenge is to match the English proverbs with the proverbs from around the world. After the students have matched them successfully, encourage them to explain their meaning.

When discussing proverbs from around the world, pay attention to how some of them reflect the realities of a particular culture. Point out if they mention animals, activities or moral values that are more common in a different culture.

The free printable with the matching game also includes the creative “finish the proverb activity” with twenty five proverbs to finish! You can read about it more here.

Sign up for our newsletter and get the printable delivered to you!