The History of Space Suits with Astronaut Paper Dolls 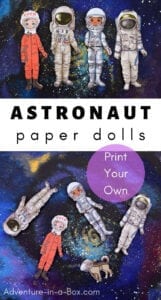 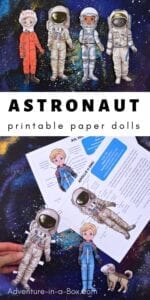 Make astronaut paper dolls and introduce the history of space exploration to kids with these printable paper dolls!

Space is full of wonders that we feel compelled to explore! Yet, space is also full of dangers that our bodies cannot survive unaided. Scientists and engineers have had to develop special suits to overcome all of the conditions that explorers face out there.

The History of Space Suits pack was created to share those achievements with children who are interested in space and to encourage their enthusiasm for the accomplishments of science, technology, and teamwork!

UPDATE from 2020: The pack now also includes SpaceX suit, the most modern space suit used for sending humans into space.

About the History of Space Suits Pack

The History of Space Suits pack was created:

Included in the set, you will find:

Here are all the space suits in the pack.

Below are a few of the information pages – there is one for every suit. Look at all the arrows labelling the different parts! Whenever possible, we referred to the original space suit manuals to find the explanations of how they work and what the various parts are for.

Tip: You can bind the printable information pages into a nine-page book!

Now, let’s take a closer look at some of the space suits!

As mentioned before, the first space suit was not made for a human. In 1954, two dogs – Lisa and Ryzhik – became the first living creatures to wear space suits.

During the first stages of the program, the dogs were flown to an altitude of 100 km in a pressurized module. The first space suits were made for the purpose of their safe return by parachute (as was later used for the first human spaceflight).

I think that many children will find the story of space dogs fascinating and touching! It certainly had its triumphs and its losses, the most tragic of which was Laika, the dog who became the first living creature to orbit the Earth, but never came back.

You can read about her story, as well as many brighter moments of the dog space program – how the scientists chose the dogs, how they worked with them and what happened with the puppies of the first dog who came back from an orbital flight around the Earth!

First Man and Woman in Space

The first man in space was Yurii Gagarin in 1961, and the first woman – Valentina Tereshkova in 1963. Their suits – SK-1 for Gagarin and SK-2 for Tereshkova – were very similar! They were not intended for use in outer space, but more as a back-up life support in case of an emergency and for parachuting back to Earth after re-entry.

In this part of the pack, children will find out about the details of this first flight into space and why the first space suits were orange. By the way, if you want to learn more about the first woman in space, our amazing women guess who game features Valentina Tereshkova.

The A7L space suit did just that! Both before and after, it was used in other Apollo missions – during space walks, flights around the moon, and later still, for the Skylab station missions.

For the lunar walk though, special additions were developed – they have become known as Apollo 11 EMU (Extravehicular Mobility Unit). Apollo 11 EMU included a life support backpack, a radio communication system, and a highly-reflective gold-plated visor to protect astronauts from the sun. The Apollo 11 EMU also had lots of neat pockets and valves – for pencils, for lightpens, for sunglasses, etc.! There was also this mysterious button “mom” on their communication system. No, it wasn’t for astronauts to give a call to their mothers from the moon. :-)

All of those features are marked and described on the information sheets for these two space suits.

The pack also features a Mercury space suit that is famous for bringing the first NASA astronauts into space. It is very handsome and shiny!

The other one included is the Orlan space suit, the only one of these space suits that is still actively used by cosmonauts and astronauts alike on the International Space Station. Like the Apollo 11 space suit, it also consists of layers – we’ve included both the liquid cooling undergarment and the suit.

Finally, there is a modern SpaceX space suit.

After reading about all the fascinating details about those space suits, why not dress-up the paper dolls with them? Paper dolls make a fun portable craft – children can work on them anywhere and bring them along on trips.

To make the dolls, simply print all the templates on sheets of card stock and cut them out with scissors and/or hobby knife. All the space suits fit both the boy and girl dolls

Tip: Paper dolls are charming old-fashioned toys, and they are great for developing fine motor skills in children. But if your children are not interested in fiddling with tabs, there is an easy solution for making them into magnetic dolls. You can even laminate them for longevity!

Another thing worth mentioning about this particular set is that you can either keep visors on or cut them out with a hobby knife – both variants are possible! And if you are cutting it out, you can even try to include a couple of little microphones inside, like on the picture below.

Get the History of Space Suits Pack!

Interested in exploring the educational possibilities of paper dolls further? All of our paper dolls are compatible! 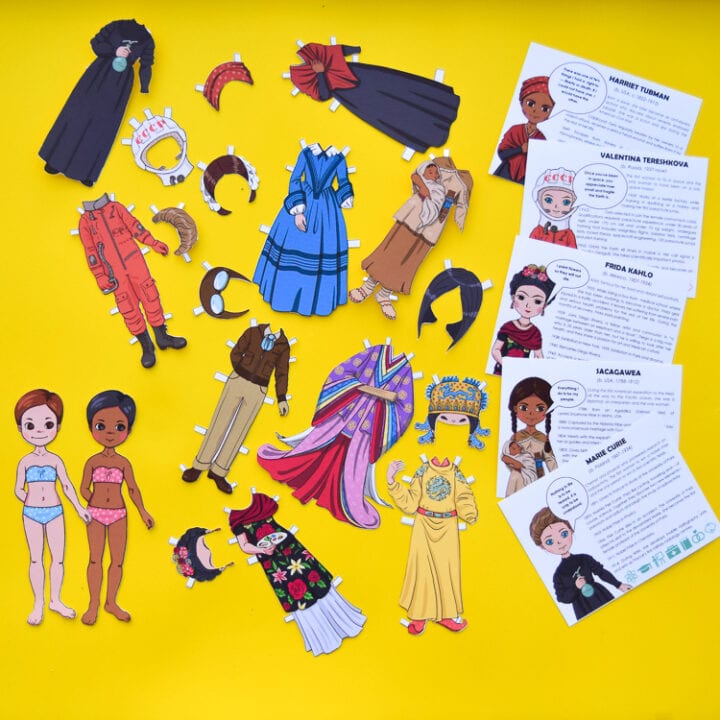 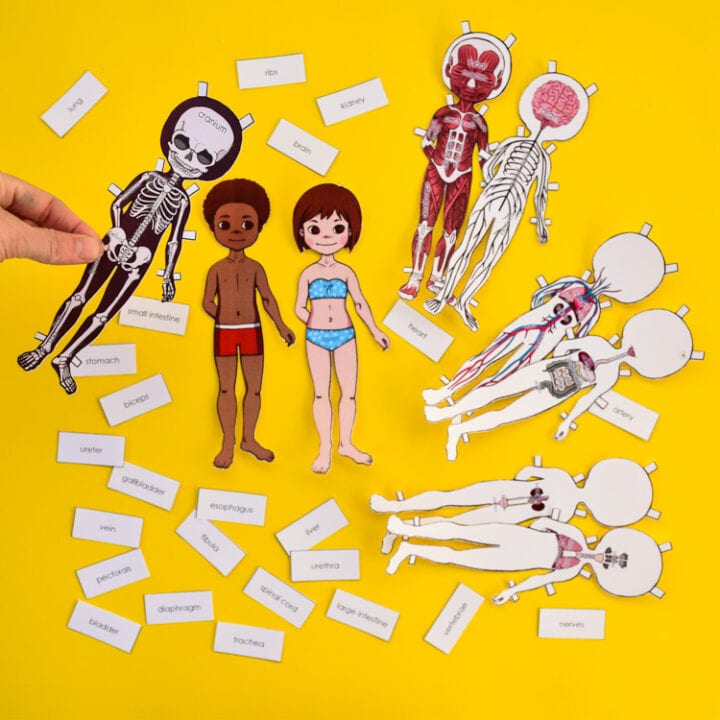 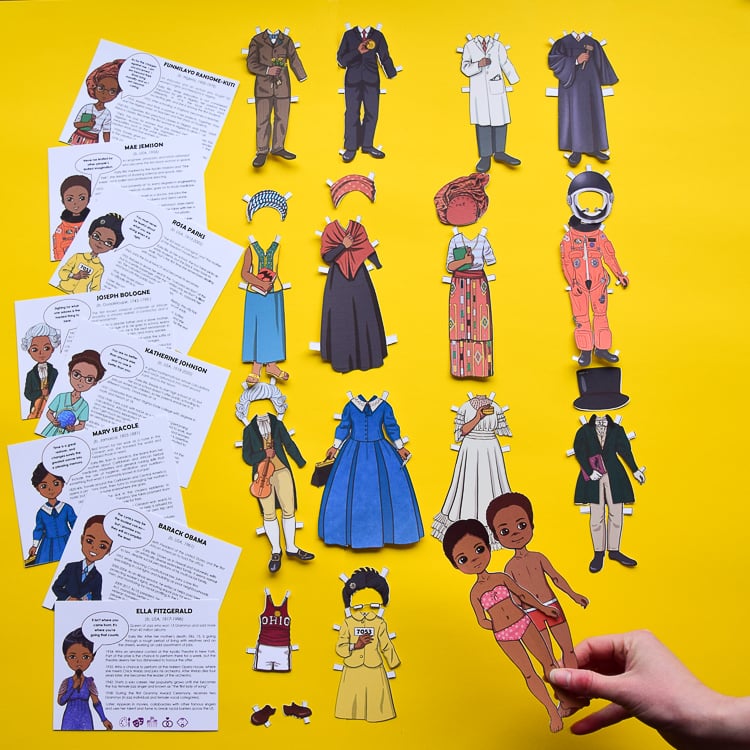 Celebrate Black history while making a set of printable dress-up and magnetic paper dolls of fifteen inspiring people who changed the world! 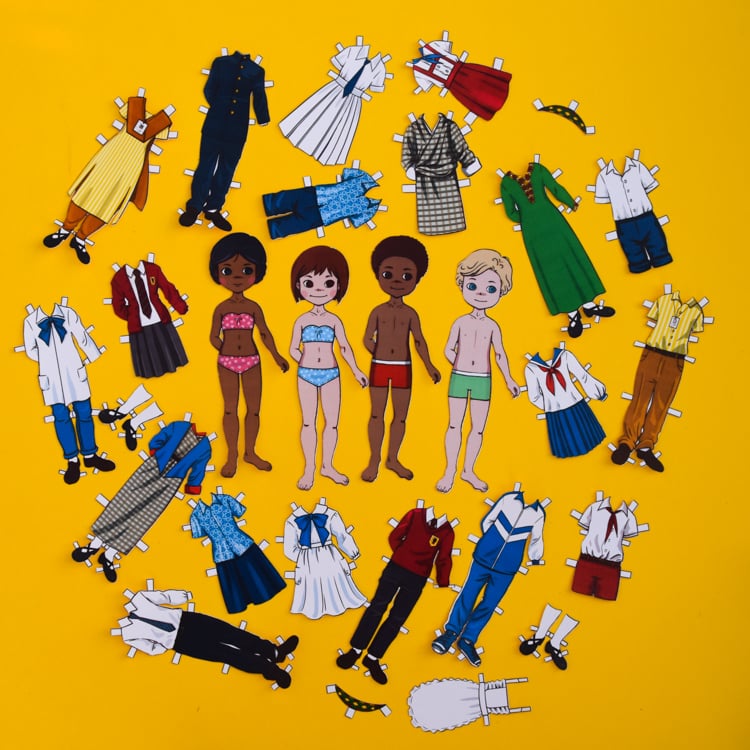 School Uniforms Around the World

Explore cultural diversity with kids by getting the paper dolls ready for school and dressing them up in a variety of school uniforms around the world! 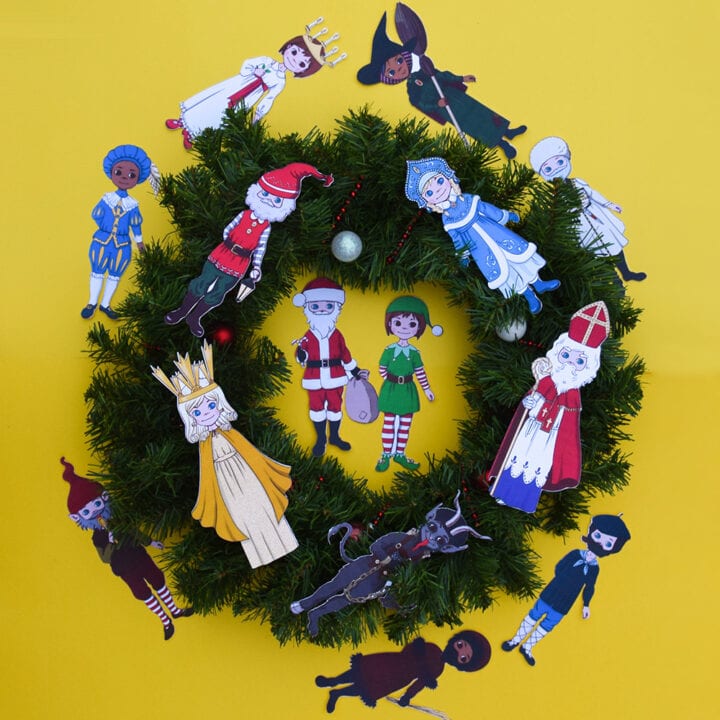 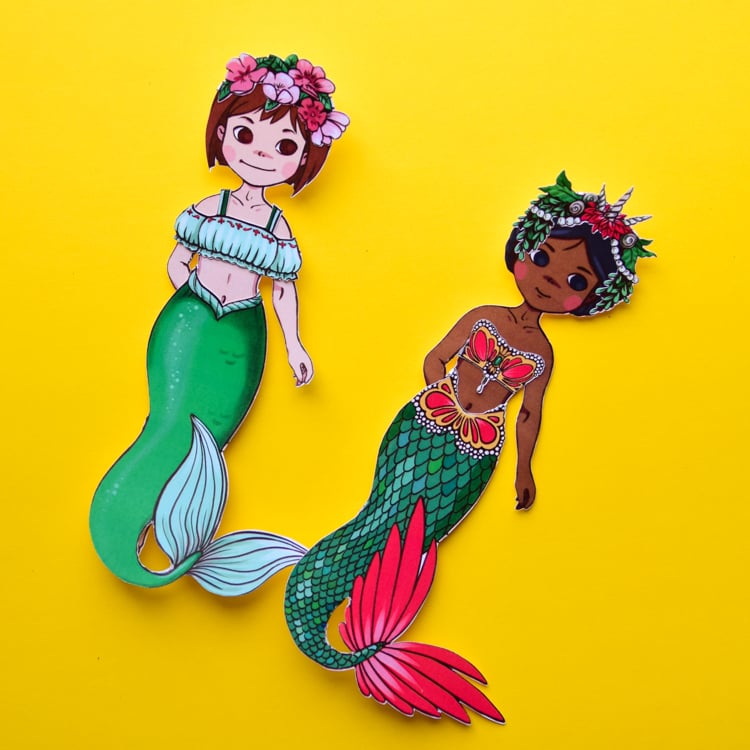 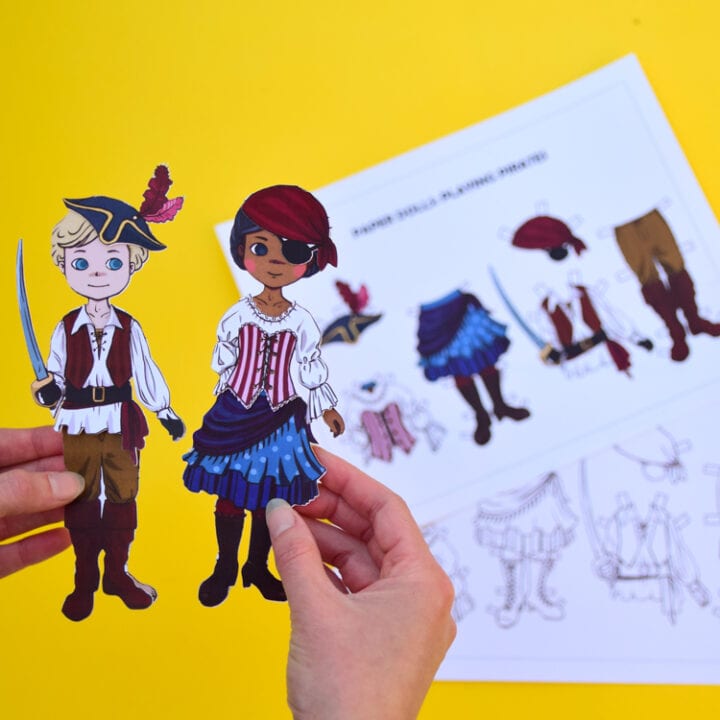 Get these printable paper dolls ready for a change of seasons with a free set of colourful spring/autumn clothes! 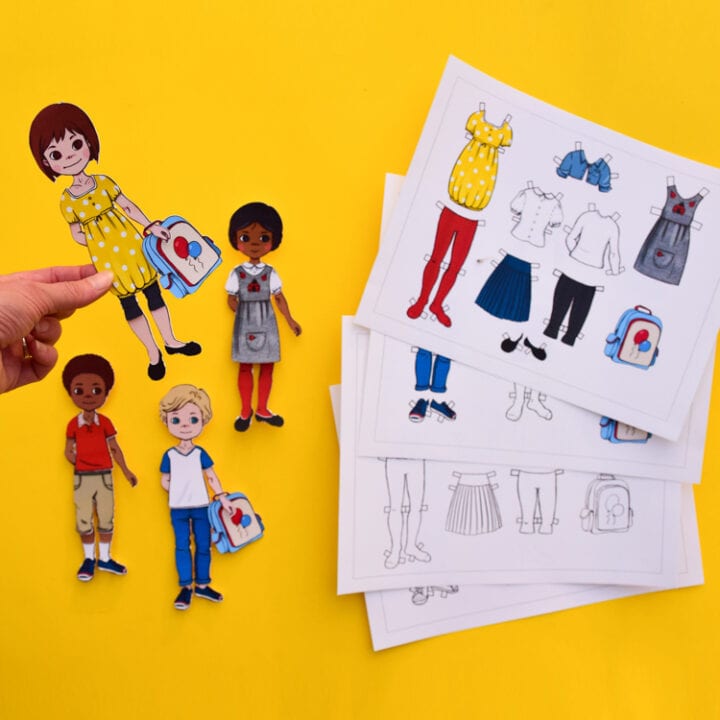 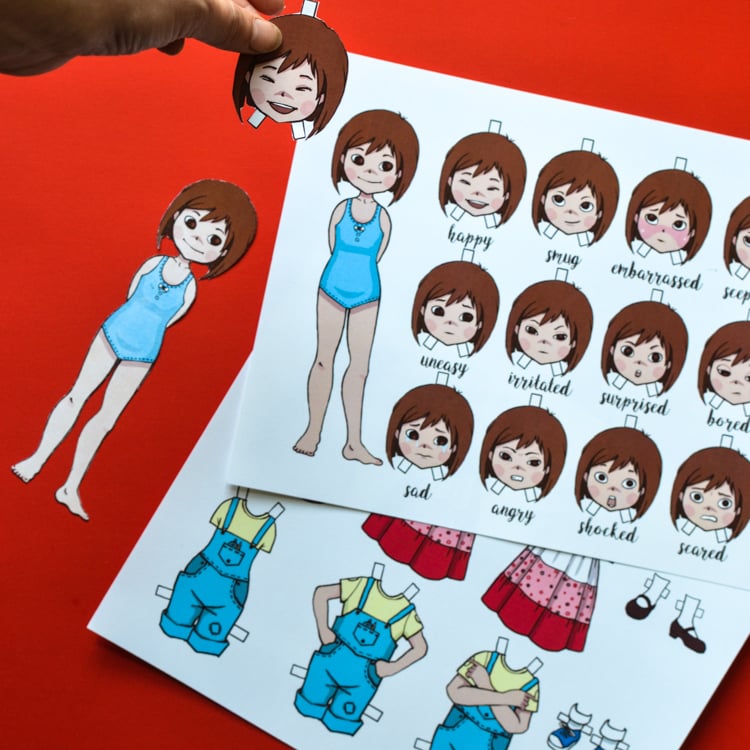 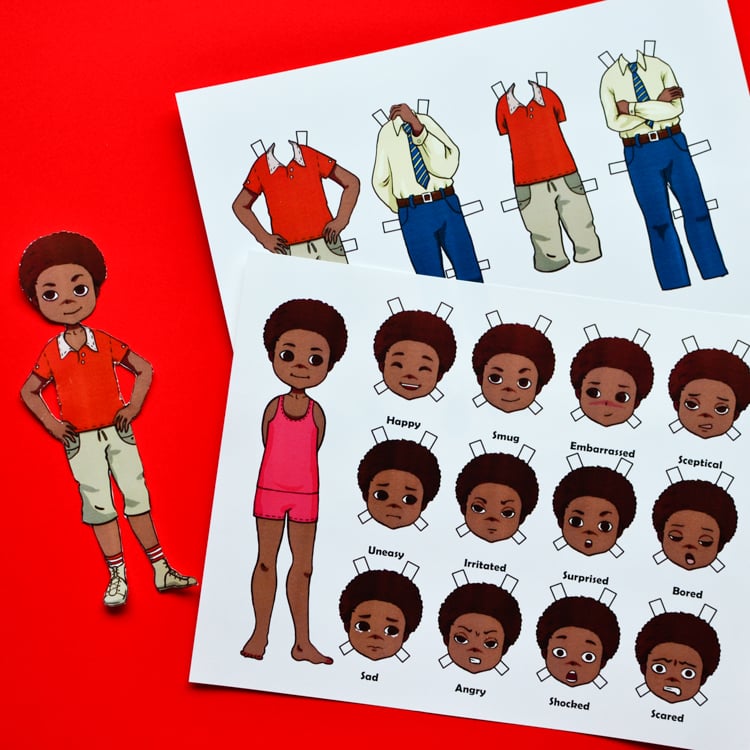