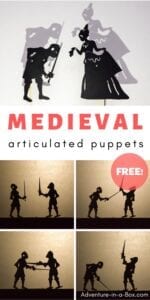 Learn how to make shadow puppets with moving parts and have playful shadow puppet duels with these articulated knight puppets!

We love shadow puppets! Over the years, we have created many different shadow puppet templates. Some have been fairy-tales, others have depicted myths and legends, and still others included silhouettes of animals and focused on open-ended play.

Up until now, however, all of them have been static shadow puppets – intricate designs, but not given to a wide range of gestures due to their mechanical simplicity. We value them for how easy to make and operate they are, but there are so many cultural traditions around shadow puppetry that we haven’t tried yet, so we set about learning how to make shadow puppets with moving parts.

Today, we’re happy to announce that our first set of articulated shadow puppets are made and ready to play! I would even say, anxious to play – they are so full of character and amusing gestures.

Allow me to present you these two brave knights and a fair lady! They are dressed in 15th C European attire, so if you are studying history, they can be a fun addition to the lessons on medieval times.

By the way, the knight puppets were designed by a real-life armourer, who happens to be my husband. :-)

While we wanted to explore the technique, we never anticipated having so much with the resulting puppets. We worried that they might be difficult to operate, but quickly forgot all about that while we used the puppets to stage battles and reenact silly dialogues between the two knights. They liked to quote Shakespeare, too!

You know, “A knave; a rascal; an eater of broken meats!” Or, “A pox o’ your throat, you bawling, blasphemous, incharitable dog!”

They behaved much more courteously in front of the lady.

Watch the video for some live-action!

The castle in this video is from the Make-Your-Fairy-Tale shadow puppet set, and the branch can be found in the Fables and the Nursery Rhymes sets.

Idea Behind the Puppets

The idea behind creating the trio was to explore articulation, so we were looking for silhouettes of some dynamic characters. At first, we considered making a pair of circus performers or fairies, but settled on the knights, envisioning their fight with swords crisscrossing. We threw the noble lady in at the last moment because we were having so much fun with the idea. She is surprisingly eloquent of gesture with her handkerchief!

How to Make Articulated Puppets

A puppet can have many articulation points; a puppet of a human, for instance, can have articulated legs, arms, elbows, even fingers. But those kinds of puppets with many moving puppets would be difficult to operate for a beginning puppeteer since there are so many wires to deal with simultaneously.

That’s why we chose to start with only a few articulation points and to operate all of them with a single additional wire.

Each of the puppets has three articulation points. One is in the middle of the body – to facilitate some gross motor activity, such as bowing, bending and and reaching forward. Two more are in the arm – to make fencing possible.

If you don’t have such a machine, never fear! Just print and cut with scissors – here is the post, exploring how to make shadow puppets by hand.

Punch holes at the points of articulation. If you have a hole punch that makes 1/8″ holes, that will be great. If not, scissor tips should work sufficiently well.

Connect the puppets with miniature brads.

At their current state, the puppets are already fun to play with. You can also make stop animation by arranging them in any position you want against a white background…

…or behind the screen of a puppet theatre.

If you want to have a traditional live performance with shadow puppets, you will need to string them. We recommend using wire. It should be thin enough to be discreet, but thick enough to enable the required leverage for moving the parts around.

The wire for operating the articulations can be used to wiggle a hole through the pommel of the knight’s sword. Then bend the wire into a loop to close it. The nice thing about this control method is that it allows the knight to be operated while facing either left or right.

Now, you can practice operating the puppet. En garde!

We haven’t tried a scripted story yet for the knights, we’ve just played around and made fun scenes with them.

Here are the two of them, challenging each other to a duel and having a fight. No question who is dejected and who is victorious in the end – these guys are great actors!

We’ve also tried the knight and the lady. Score another point to the knight for his courtesy – the lady obviously appreciates it too.

After goofing around with them for a while, we realized that the articulated puppets are well-suited for trying stop animation with shadow puppets.

For a live action performance, you get to operate the wires. At first, we thought it may be difficult, but it turned out quite a lot of fun.

Yep, making the knights do exactly what you want takes some practice, but even without that perfection, they behave in a very realistic – and animated – way. Actually, manipulating the knights behind the screen reminded me of dealing with a game controller! Not always precise, sometimes comical, but invariably fun.

Having a duel that way felt very realistic. Would I be able to make my knight strike forward or not?

But in reality, even our six-year-old could operate the knight and have a fun duel with his dad!