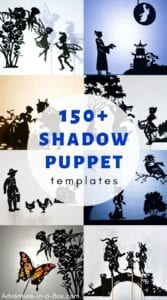 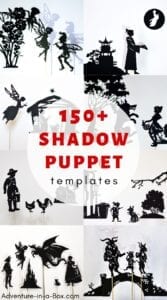 A big collection of shadow puppet templates to print and make – setting up a shadow play at home will be easy and fun!

Many children quickly learn how to play with shadows on the walls, using their hands. They tend to love any activity that is both full of innocent magic and pushes bedtime off a little bit longer!

Once they have explored hand shadow puppets, it is natural to progress to traditional shadow puppets! A long time ago, they were made from hide or parchment. Nowadays, they are mostly made of stiff card stock or acetate.

But is there really a place for shadow puppets in this age of 3D animation and computer graphics?

Absolutely, yes. They’re still a lot of fun for children!

Using shadow puppet templates, children can stage their favourite fairy-tales or engage in open-ended storytelling. They can conduct scientific experiments with light or try coloured filters. They can even use shadow puppets to create simple animation! Bottom line, shadow puppets allow them to be creators instead of the audience, so it’s just the right kind of toy for any young artists, writers, directors, or animators.

Over the years, we have also created a variety of printable shadow puppet templates suitable for an educational environment. We have shadow puppets that allow teachers, librarians, or parents to present fairy-tales, fables and nursery rhymes, teach about animals, and explore myths behind some festivities. And we enjoying continually adding more to our collection, so if you have an idea for a new set, leave a comment or send a message.

How to Make Shadow Puppets

You can get printable shadow puppets and cut them out yourself or you can order a shadow puppet set from us that has already been cut, and we will ship it to you.

If you want to cut the shadow puppets yourself, there are several ways you could go about it. Read a detailed post with a video about it here.

In short, you can cut the shadow puppet patterns using traditional tools (scissors and a hobby knife) or using silhouette cutting machines (Silhouette or Cricut). The first takes longer, but doesn’t require any special tools at all. The second is very easy and fast, but requires an investment in a specialized machine. Our designs for shadow puppets are saved in PNG format, so that they can be used for either method.

How to Put on a Shadow Puppet Play

A flashlight is enough for a start. Just point the flashlight at the puppet and let it cast shadows on the walls. You can have a bit of shadow puppet play before bedtime every now and again and tell stories with puppets.

If you want to have a proper theatrical performance, add a simple cardboard puppet theatre or invest some time into building a sturdy vintage-inspired theatre from wood. It would be surprisingly easy to organize enchanting performances at home for friends and family behind a screen of parchment paper!

The list is constantly updating, so come back regularly to check for new templates!

This series of shadow puppets were based on famous fairy-tales, so that we could reenact familiar stories with our children. 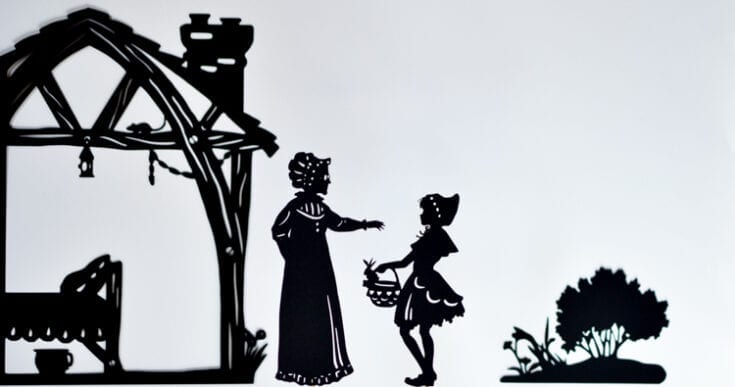 While walking through the forest, a little girl in a riding hood meets a big bad wolf. There is a certain sense of foreboding and danger about Little Red Riding Hood that is well suited to the dark silhouette world of a shadow puppet play. We have improved it since, but this set will always be special to us because it was the very first set we ever made. 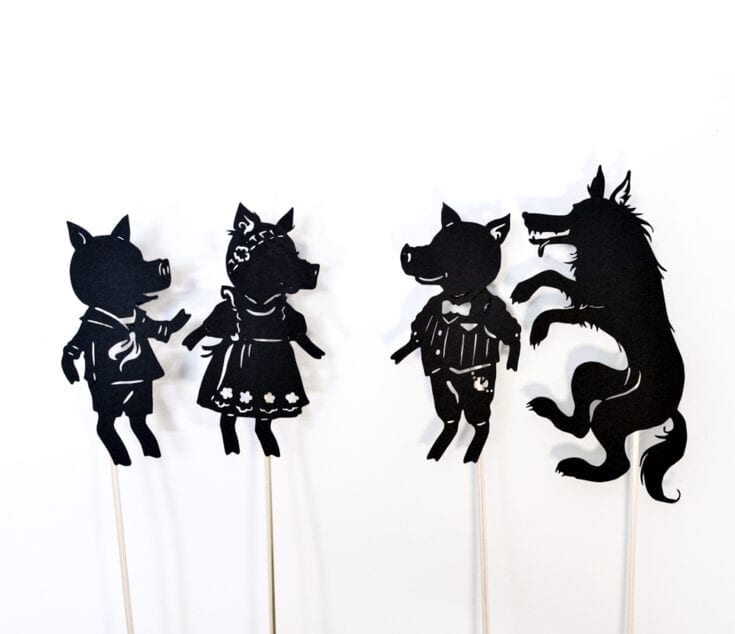 I always wonder how children decide who of these three pigs is the one who built the straw house, who built the branch house, and who was the creator of the brick house.

For our family, this is the set that has seen the most creative play, and I always think about it when I talk about how children can really make their own stories with shadow puppets, using familiar characters. In some epilogues, presented by my son, Wolf has even come to tea afterwards!

Based on the Norwegian fairy-tale, this is a very good shadow puppet play for beginners. It has a straightforward plot, and the majority of the fairy-tale is based around dialogues between two characters. We took a video of our shadow puppet play, so you can see how we perform it, as well! 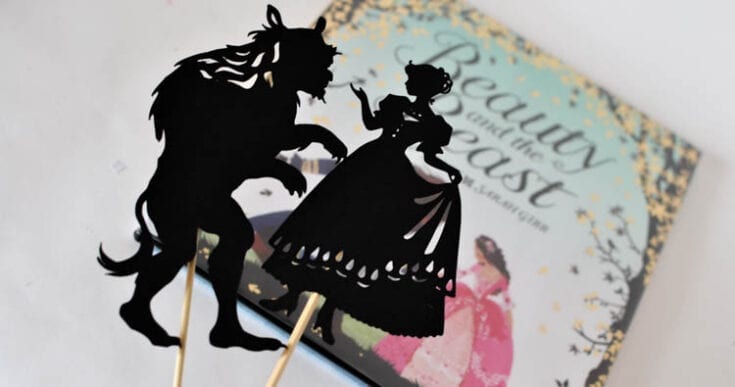 Beauty and the Beast

The story of a girl who learnt to love a monster for the kindness he showed to her. The story of a man who was unkind once, but succeeded in changing and finding love. Romance, character growth, and a caring hero – a winning story! Beauty and the Beast was also a delight to turn into a shadow puppet set. 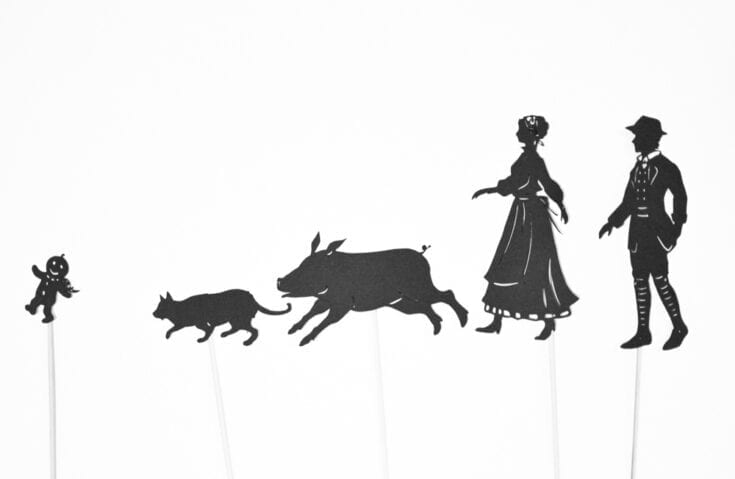 A good shadow play to put on during long winter evenings, after the house has already been filled with the smell of gingerbread cookies. 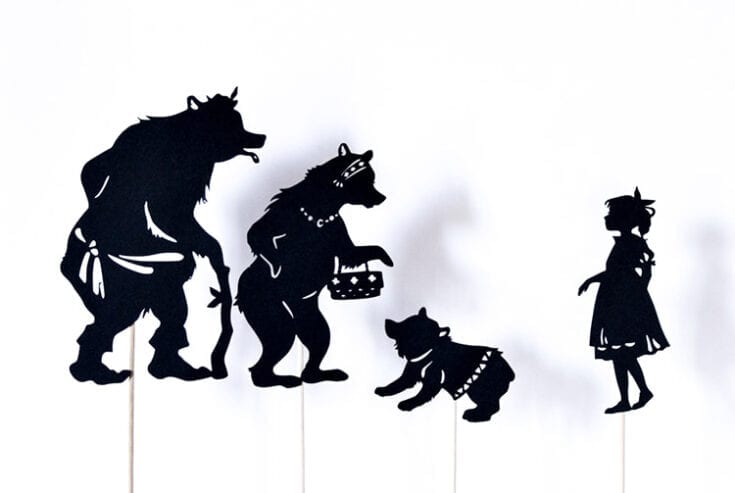 Goldilocks and the Three Bears

Cumulative fairy-tales, such as Gingerbread Man above or Goldilocks and the Tree Bears here, with their repetitive scenarios and dialogues are really easy for children to memorize and, therefore, to turn into a shadow puppet play. The script is also very straightforward for this one - just make sure you fit all the bowls, chairs, and beds onto the screen! 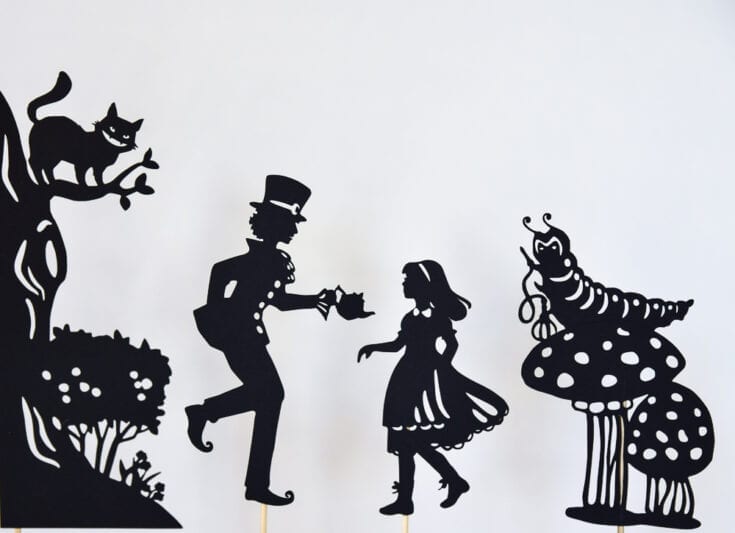 Send Alice on an adventure in Wonderland! The set includes the characters of Alice, the White Rabbit, the Cheshire Cat, the Caterpillar, the Mad Hatter, and the Queen of Hearts. 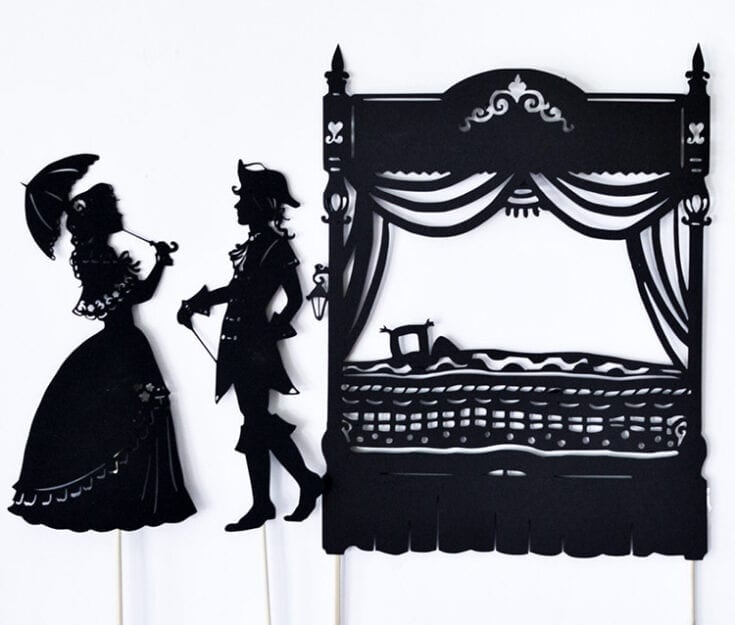 The Princess and the Pea

Open-ended shadow puppets are not based on any particular story or fairy-tale, but instead include a set of familiar characters that will prompt children to make their own stories. They are the most likely to encourage creative storytelling. 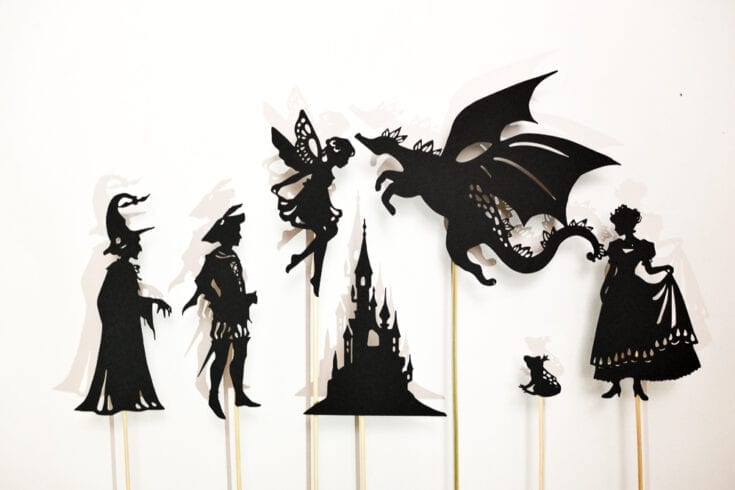 This set is not based on any particular fairy-tale, but rather includes familiar fairy-tale characters - a prince/knight, a princess/fair maiden, a fairy (also doubles as a fairy godmother), a witch (good or bad, it’s up to you to decide!), a dragon, a beast/ogre, a king, and a frog. The children get to decide what their story is going to be about! 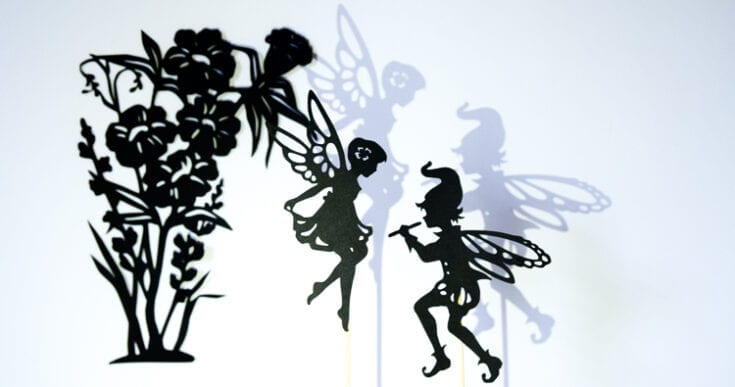 Ever wondered what it would be like to have a fairy fluttering around your bedroom? You may not be able to get a real fairy, but you can certainly have their shadows fluttering all over the walls! 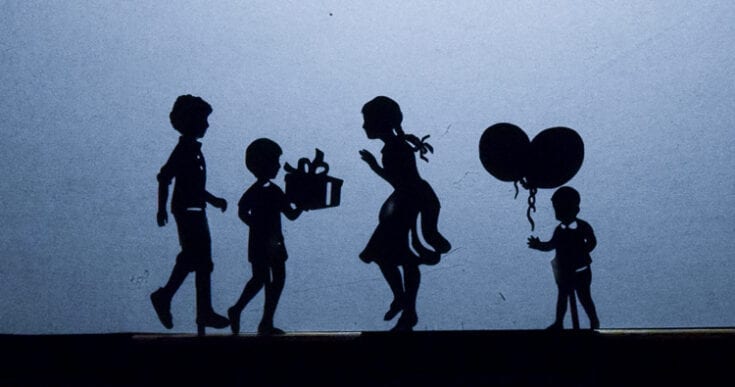 Getting ready for a birthday party, talking about what to do when you get lost, or outlining the rules of behaviour on the playground? I bet that as a parent or a teacher, you have done it plenty of times! These shadow puppets will make such conversations interactive, educational, fun, and memorable. And if you want to check how prepared children are, just ask them to stage the shadow play themselves!

Technically, animal shadow puppets are also open-ended sets, however they can also be used to supplement various nature study units. 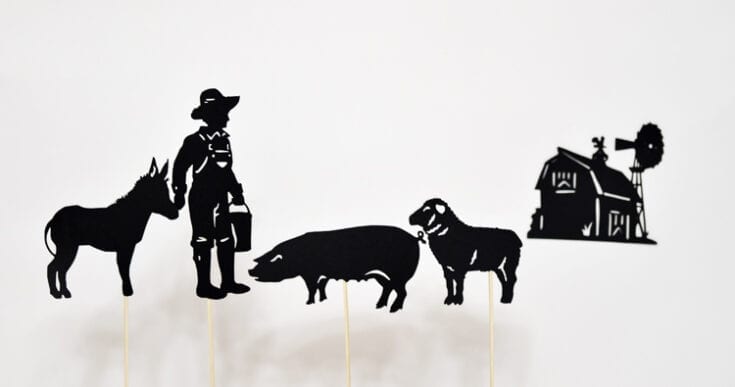 What child doesn't enjoy bellowing Old MacDonald Had a Farm or Farmer in the Dell at the top of their lungs? Singing is easy to transform into a full theatrical act if only you thrust a few farm animal puppets into their hands! 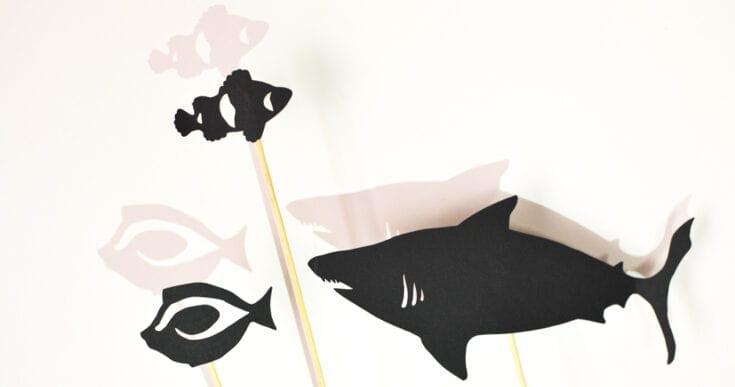 In particular, this shadow puppet set was supposed to represent the animals in Great Barrier Reef, so if you're teaching about that or generally about sea life, children would enjoy playing with it. 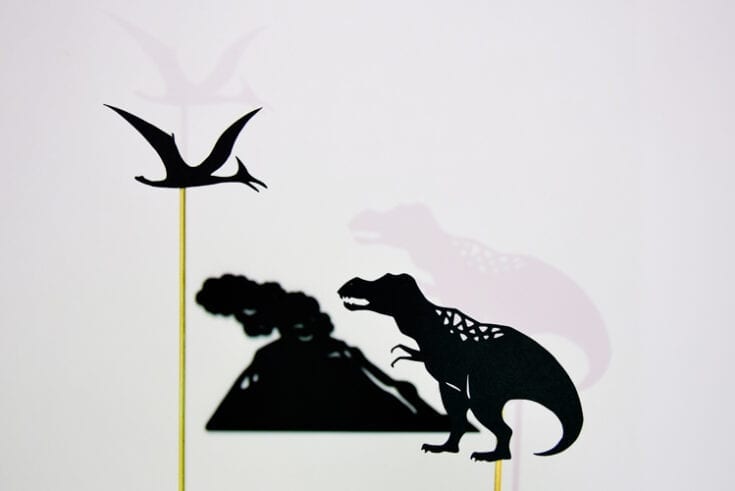 Invite the shadows of extinct beasts to roam across the walls of your nursery, as kids learn about dinosaurs and tell stories about them. Get ready for some roaring! 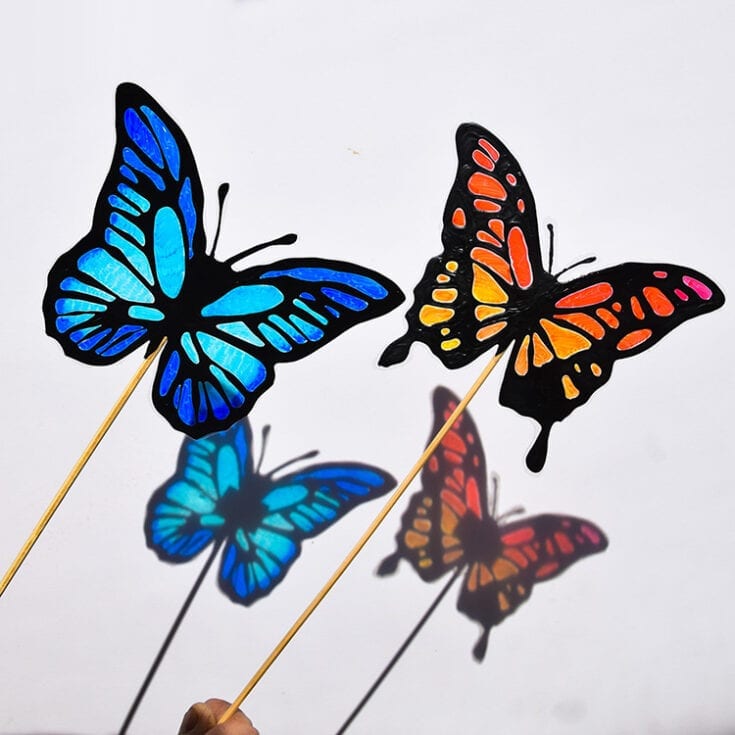 These templates offer a different idea of how to make shadow puppets. First of all, almost no cutting is required. Second, they're colourful! Actually, with a bit of help, children as young as five can make these. 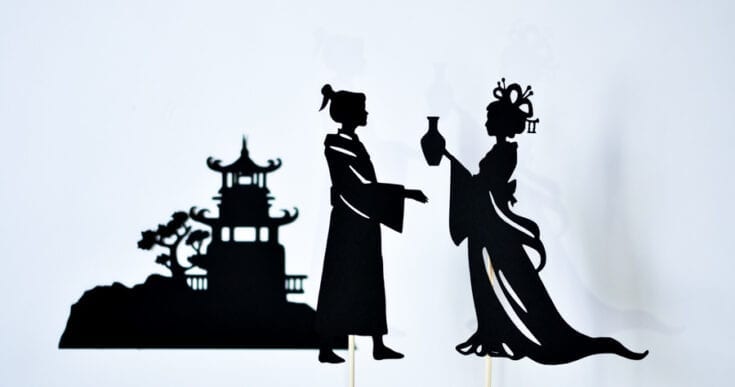 For a casual onlooker, Mid-Autumn Festival is associated with mooncakes, paper lanterns and fire dragon dances, but the actual sentiment of the festival is very touching. “May we share the beauty of the moon together, even if we are hundreds of miles apart,” says a romantic Chinese poem. These shadow puppets tell the origin myth of the festival. 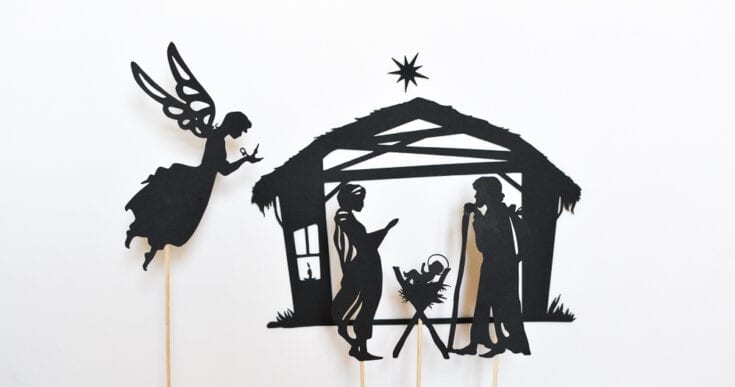 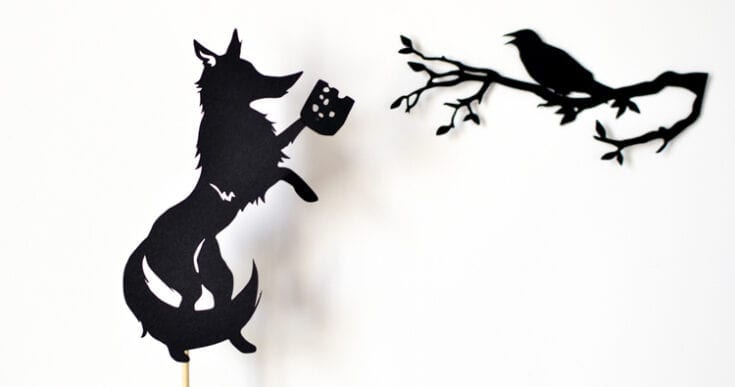 This one features not one, but three stories! Using these shadow puppet templates, children will be able to stage Hare and Tortoise, Fox and Crow and Fox and Crane. Since each story only features two characters, those are very easy for beginning puppeteers. 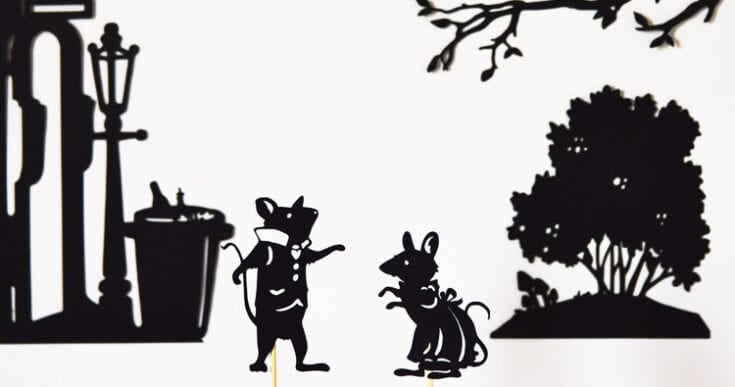 One of the more complex - and more famous - of Aesop's fables has been told in many versions through history. With a more diverse set of characters and backgrounds, we've made it a separate set. 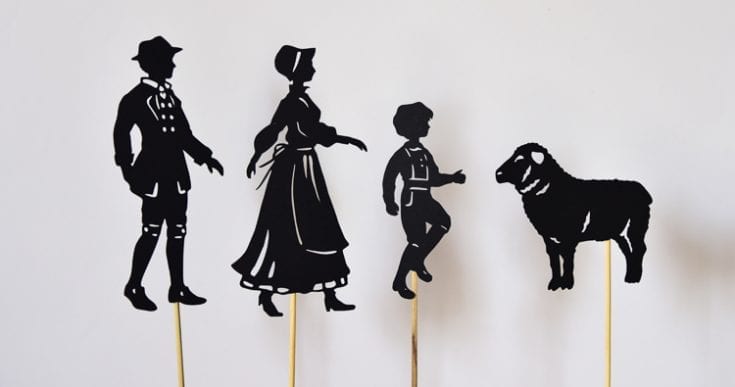