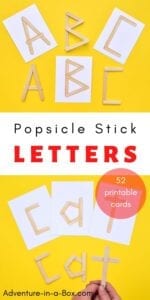 What craft supplies are more common than popsicle sticks? And yet, it never occurred to me that we could make popsicle stick letters!

It was my three-year-old daughter who was watching her older brother tinker with wooden sticks and suggested that we make her name from them.

Then, of course, we wanted to see whether we could make all the other letters, and the popsicle alphabet building challenge was born!

You can challenge your beginner readers and writers to create a popsicle stick alphabet as well, and if they need some prompting, we have got that covered. Here you will find 52 printable cards with 100% scale popsicle stick letters!

How to Use Popsicle Stick Alphabet Cards

Start by printing and cutting the cards. You can print the 100% scale cards or reference sheets with all the letters on one page. Tip: Laminate for longevity!

In order to accommodate a wider array of designs, especially for lowercase letters, some of the popsicle sticks were cut into halves and thirds. You can use a pair of pruners, a trim cutter, or a small mitre box and saw to do that.

1 — You can use the cards as mats for building letters with popsicle sticks directly over them. Since the cards are 100% scale, it will be very easy for children to repeat designs.

2 — You can encourage children to build letters without glue and let them fall apart right away, but you can also glue the letters together, either with a hot glue gun or with white/wood glue.

3 — You can make simple words, using the cards, and encourage children to repeat the words with popsicle sticks. Examples of words to try: cat, mat, hi, pen, hen, this, etc.

4 — You also can encourage children to build their own name from popsicle sticks, then glue them on a piece of cardboard and decorate further. If they like the result, they can use it as a room sign or display on the wall.

Get the Popsicle Stick Letter Cards!

The cards are great for alphabet learning centres! The pack has:

We have plenty more alphabet building resources, which we have pooled together in a BUILDABLE ALPHABET BUNDLE. Over 300 pages of letters for kids to build while playing with their favourite building toys – Lego, Magna-Tiles, pattern blocks and wooden blocks!